Arp 259/NGC 1741/Hickson 31 is a tight group of galaxies about 180 million light-years away in the constellation of Eridanus just north of the Witch\'s Head Nebula (far too large for me to try imaging). Arp put it in his category Galaxies (not classifiable as S or E): Irregular clumps. His comment reads: \"Material extends SE toward peculiar round spiral.\" That is IC 399 which is also the G member of Hickson 31. NGC 1741 was discovered by Édouard Stephan on January 6, 1878. IC 399 was discovered by Rudolf Spitaler on February 25, 1892.

Hickson considered this to be at least 6 galaxies, A-F but some put IC 399 in as G. NED includes many more. I\'ve shown most of them on the annotated image but in a couple cases, the positions had a 5\" error circle making it hard to tell which was which. In one case H1 and H2, I gave up and drew one point for both. Others I saw nothing in the circle so didn\'t include. Most had redshift distance. All but one of which put it at about 180 million to 185 million light-years. One Hickson 31D was very red in color, often a sign of distance due to interstellar reddening. Sure enough, it is 1.2 billion light-years distant and obviously just a bright line of sight galaxy far larger than any in the true group. Some members of Hickson 31 are considered part of NGC 1741, parts A, B, C, and D. Though again, D is obviously only a line of sight member.

It appears to me that many of the other members NED includes are really just massive star formation regions created out of the debris of the interaction of A, B, C and possibly E. G is certainly a separate galaxy. F could go either way but I prefer it a small dwarf with massive star formation creating the strong IR light it emits.

Then there is the one that NED labels as Q! I have no idea what happened to all the rest between G and Q. It\'s only other catalog name I could find is NPM1G -04.0219. Since this field is out of the SDSS survey only a few galaxies in my image are cataloged. Just yesterday, as I type this the Sloan 3 data was released. It covers some other areas of the sky besides that of previous Sloan surveys but I don\'t think this field qualifies. Still, I wanted to check but the website seems to have new site jitters and refused to do anything when I entered this field. Just timed out doing nothing. Fields I knew were in the survey did load so apparently, that is its way of telling me I was out of bounds as I expected.

The annotated image gets a bit busy trying to point to all the pieces NED records with the HCG31 label. To save space I left that part off and only included the suffix, add HCG31 to all. Most had redshift data. A few of the faint pieces didn\'t. I didn\'t distinguish those. Only D is noted with redshift distance since it was obviously a line of sight member. Other galaxies not considered members by NED are labeled only with their redshift distance using 5 year WMAP data and the time travel distance. Many galaxies, including the large low surface brightness one NE of Arp 259 weren\'t in NED at all. Very frustrating but it wasn\'t an IR strong galaxy so not picked up by the 2 micron survey which most of the field relies on.

The below chart listS the catalog designation of the members of this group.

All are between 181 and 189 million light-years distant by redshift.

Hubble Space Telescope image of A-E, north sort of up It\'s a \"little\" better than my image for some reason.
http://upload.wikimedia.org/wikipedia/commons/0/05/HCG_31_HST.jpg

Arp\'s image oriented west up rather than north up as mine is
http://ned.ipac.caltech.edu/level5/Arp/Figures/big_arp259.jpeg 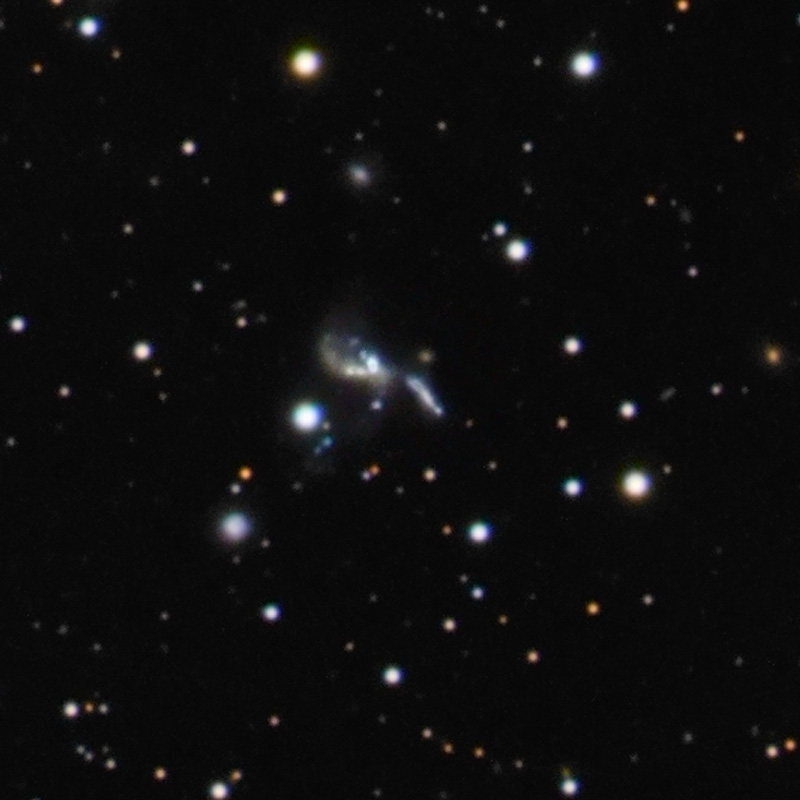 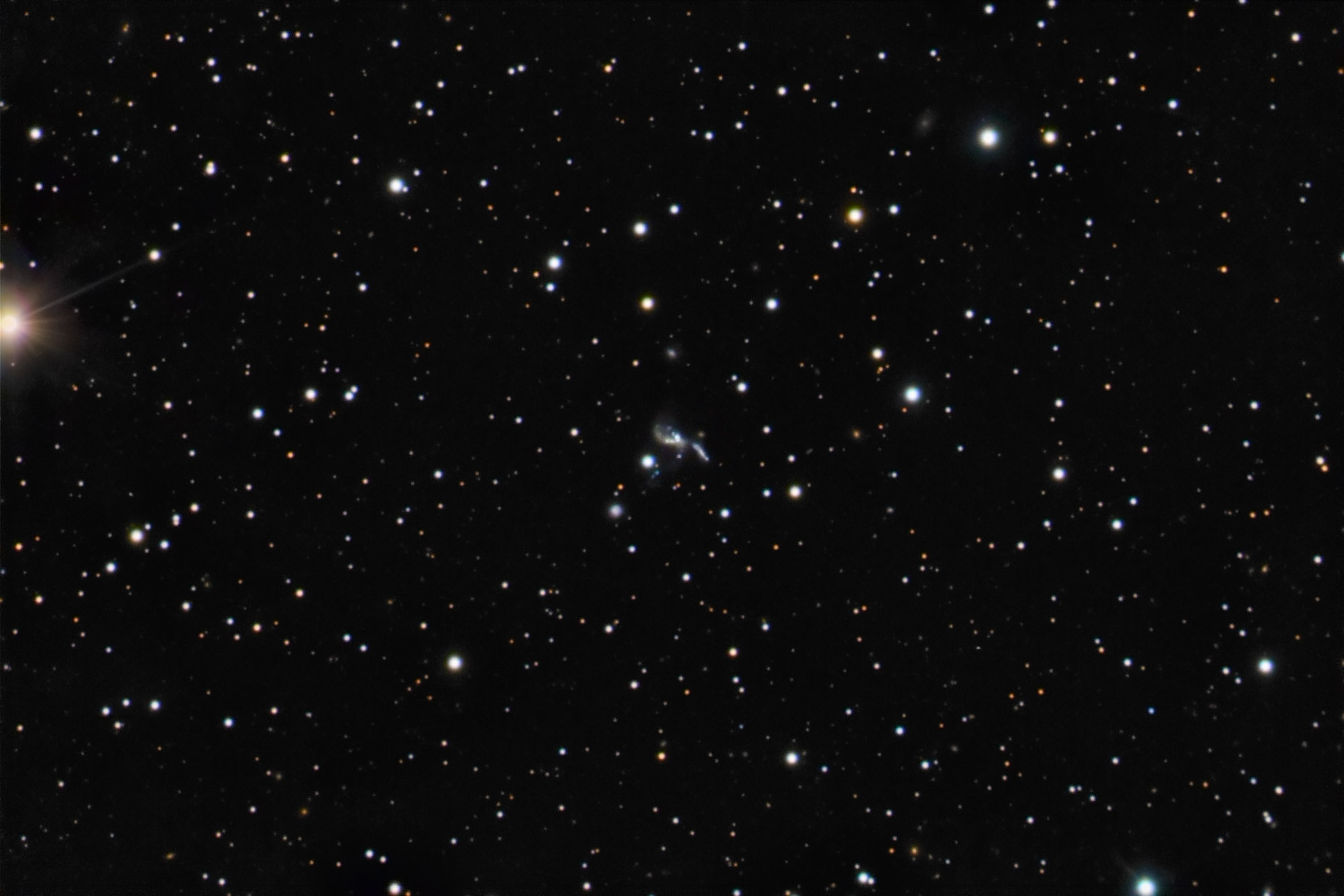 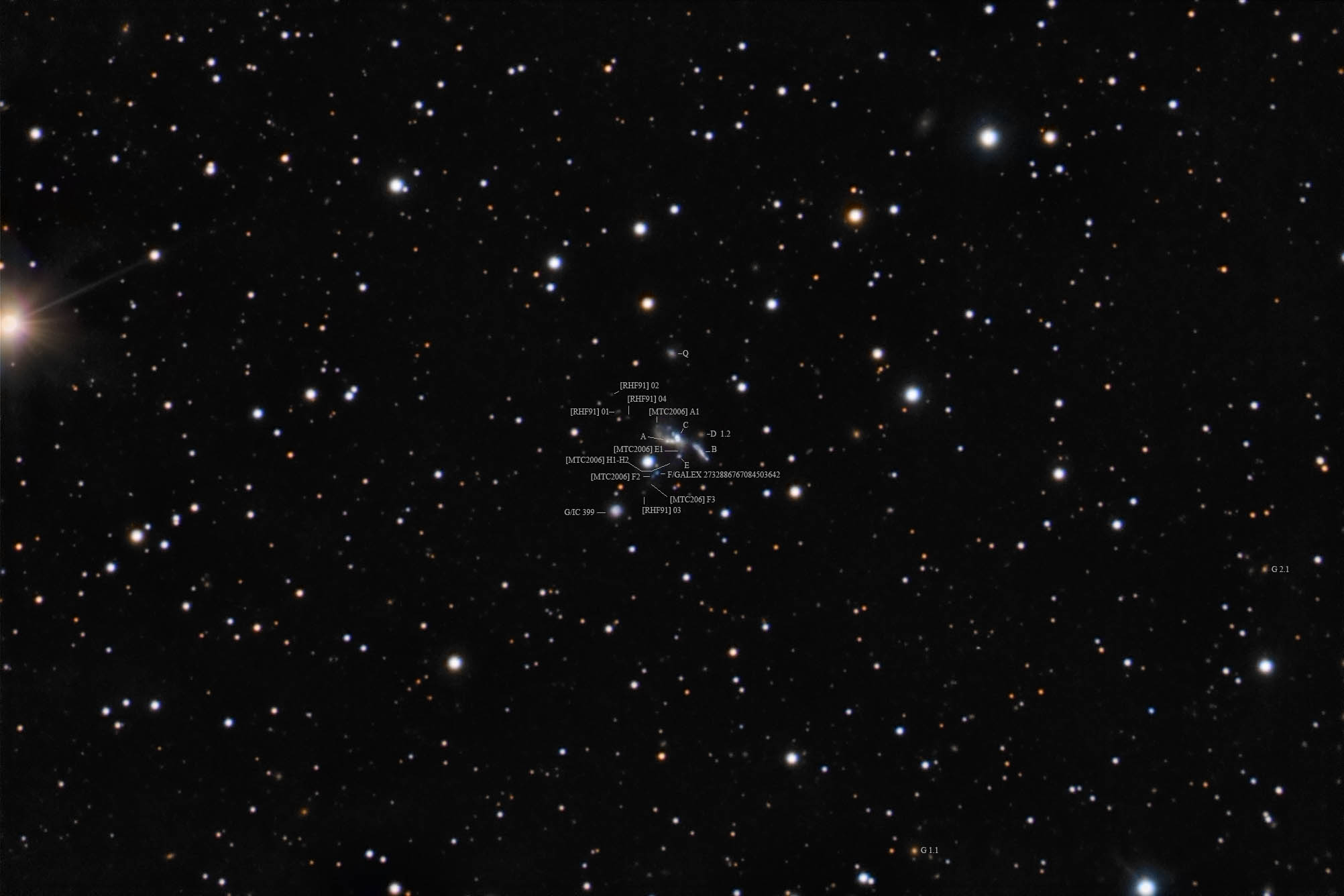