Arp 260/UGC 7230 is a pair of interacting galaxies in southwest Coma Berenices a bit north of M98. They are thought to be about 340 million light-years distant. Arp put them in his classification Galaxies (not classifiable as S or E): Irregular Clumps. I suppose that refers to the two star clusters north of the core of the western (right) member. His comment on it reads: \"Possible lines of faint condensations extending south.\" Does this refer to the large southern plume from the western member? The attached Sloan image seems to break it up into linear features.

NED classes both members as Sc. I\'d think they both are worth a pec. designation but apparently NED doesn\'t agree. The western part of the two star clusters north of the core of the western member does have its own entry in the Sloan catalog, SDSS J121337.45+160718.0. Though it is marked at NED as being part of the galaxy, not a separate galaxy.

Arp 260 is a member of a group of galaxies at about 340 to 360 million light-years years by redshift. The actual distance is probably closer to 350 million light-years averaging out their redshifts. All are marked on the annotated image that are in NED. Several are very blue like Arp 260 though far smaller. Something has happened to trigger all that star formation. Group members include the more ordinary spiral CGCG 098-102 at the upper right. I\'m rather puzzled that it is classed as SA0. I\'d think SAb would be more reasonable. It has one somewhat blue arm but otherwise is a pretty old star looking spiral. The other old star looking galaxy is VCC 0075 west and a bit south of Arp 260. It looks rather like an elliptical galaxy but NED shows it as S0? If so it must be seen end on to be so elliptical looking. At the very bottom is a blue member of the group LEDA 1497645, also known as AGC 226038 and ALFALFA 1-171. No, it\'s not a member of the Our Gang movie series. ALFALFA stands for Arecibo Legacy Fast Arecibo L-band Feed Array. Someone was having acronym fun it would seem. In any case, it is obviously a strong radio source. AGC stands for Arecibo General Catalog so that scope put it in two of its catalogs. I couldn\'t find anything at NED on it, however. Must be a lot going on there, however. It\'s strong blue color would also indicate lots of new stars being created there.

NED shows a galaxy cluster at 2.7 billion light-years, MaxBCG J183.37186+16.06813. They show it as having 16 members. The center of the cluster is at the position of a very red galaxy southwest of Arp 260. The galaxy is 2MASX J12132924+1604054 and has a redshift showing it to be 2.7 billion light-years distant. The cluster has a photographic redshift distance of 2.6 billion light-years. I\'ve noted it on the annotated image as G/GC with both distances shown. I don\'t know if the smaller red galaxy just east of the marked one is a member of the group. I suspect it is but NED doesn\'t give me enough information to be certain of this. There are several galaxies at the 2.7 billion light-year distance in the image. I assume they are members of this group. No angular size is shown for it.

There are some galaxies I\'d like to know more about. The large, but faint blue galaxy at bottom center is SDSS J121411.39+155759.5. I have no distance data on it or anything else of much use to tell how it might fit with anything in the field. The Sky shows it as PGC 39076 and classes it as S?. I don\'t see any hint of spiral structure but my exposure time didn\'t collect much to go on. It is blue like many spirals but that isn\'t sufficient to call it a spiral. 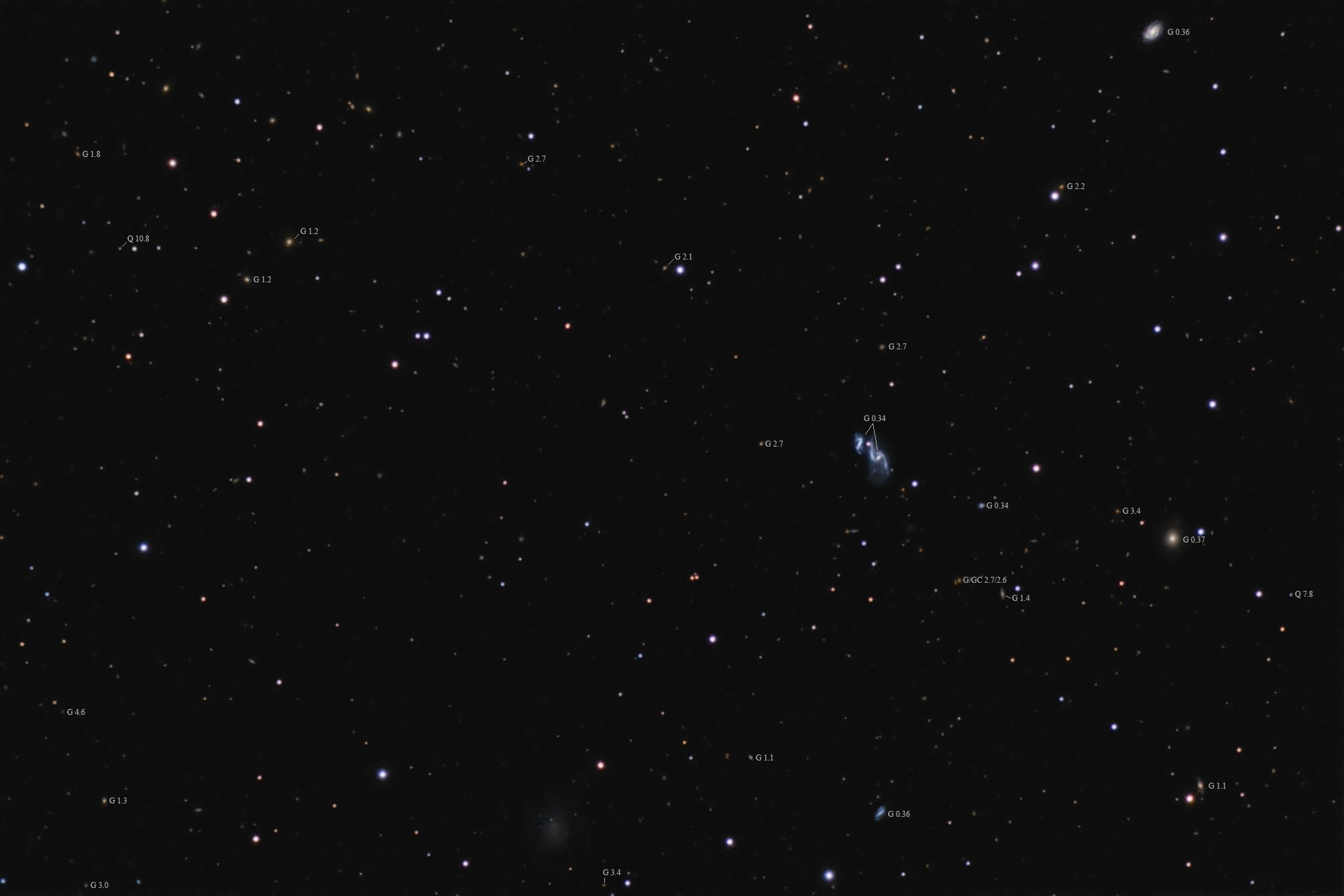 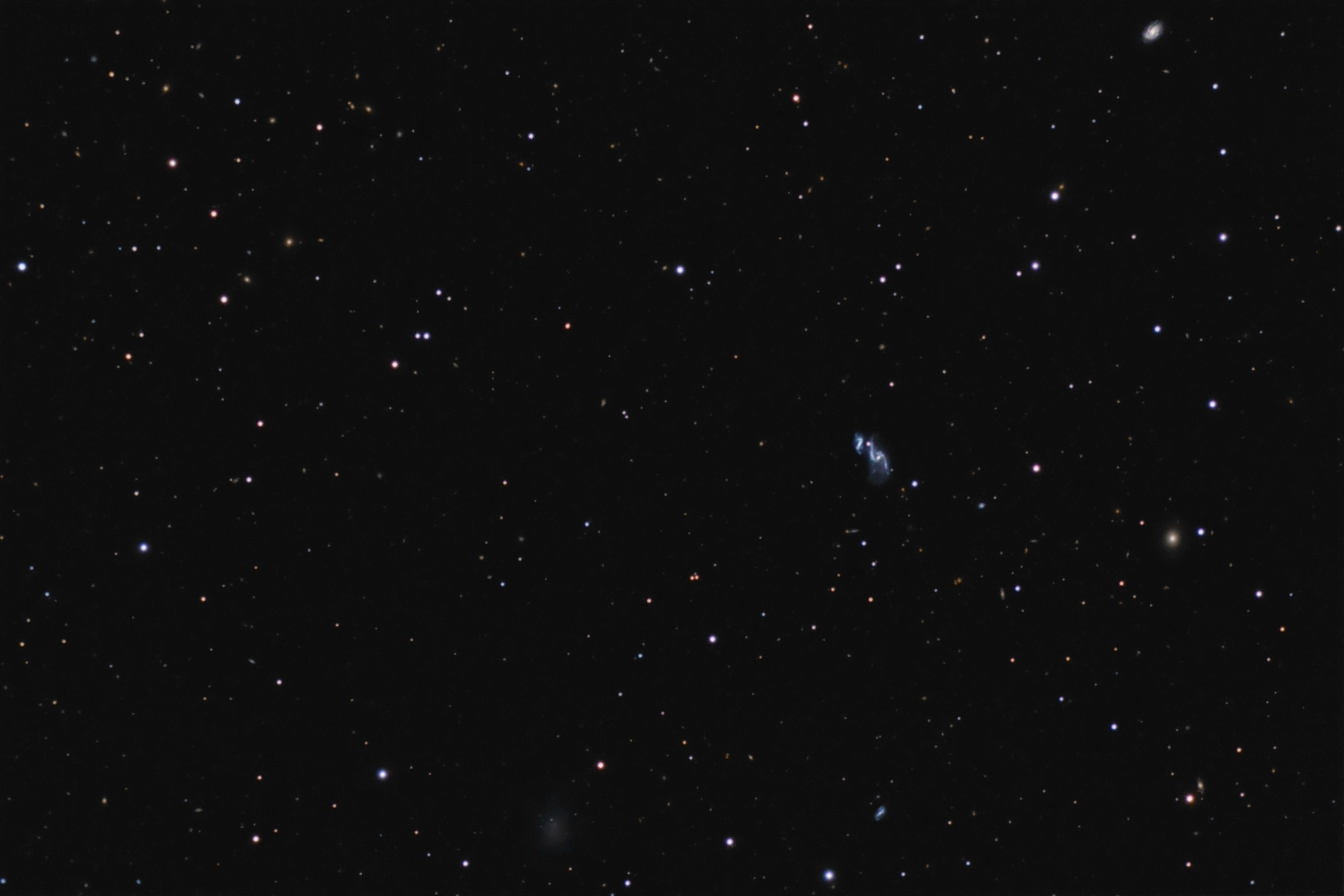 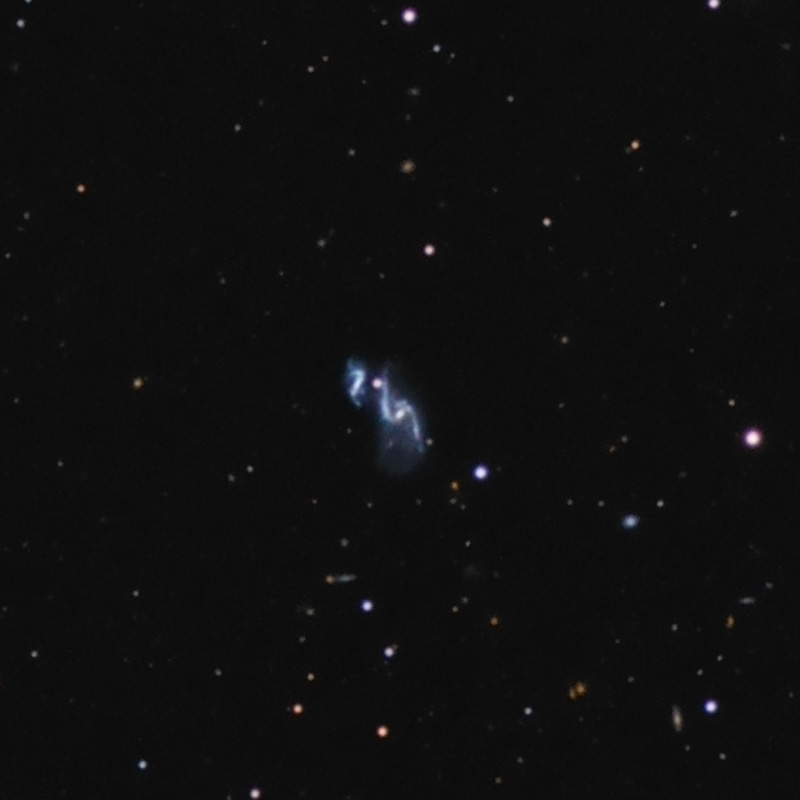