ARP 263/NGC 3239 is thought to be the merger of two galaxies. It was discovered by William Herschel on March 21, 1784. It failed to make either of the Herschel 400 observing programs. I find no records that I ever viewed this one visually. When displayed with south up it looks much like the Minnesota state bird, the loon. Though it has a spike for a tail a loon doesn\'t have. The spike is likely a trail left by one of the merging galaxies. The head is likely the trail of the other merging galaxies. I suspect the spike tail is straight only from our viewpoint. Seen from the \"side\" I expect it to is curved. The head trail has superimposed on it a red star at just about the spot the loon has a red eye. It also has a white neckband right where two bright star-forming regions and the supernova make a bright area. I\'ve included a picture of a loon family for those unfamiliar with this large diving bird (it is not a duck) that can dive over 200 feet deep and has solid rather than hollow bones. Being so heavy it needs a lot of runway to get airborne and gains altitude very slowly. When I imaged in on January 21, 2012 it contained a supernova that I\'ve marked in the annotated image. Its resemblance to the loon is best seen when displayed south up rather than my usual north up orientation.

SN2012a was discovered by amateur astronomers on January 7th. It was the first supernova of the year. It is a type II supernova meaning it is a single massive star that lived fast and died in a blaze of glory we are just now seeing millions of years later. The redshift distance to the galaxy is 50 million light-years but most think it closer though, to be consistent, I used the 50 million light-year figure on the annotated image. Most current estimates are more like 25 to 30 million light-years. The one Tully-Fisher measurement at NED says 26 million light-years. In any case, it is a rather small galaxy, likely the result of a merger of two even smaller galaxies. NED classes it as IB(s)m pec. It has two tidal tails. A straight one on the west side going south-southeast that is full of knots of star formation. The other tail is a smooth curving one also starting south but curving around the east side of the galaxy and ending up going north with the SN at its base. These likely show the paths of the colliding galaxies. Assuming 26 million light-years the galaxy is about 35,000 light years across as seen from our perspective.

Colliding galaxies as is likely the case here, create a large number of massive new stars which will quickly go supernova after using up their huge fuel supply in only a few tens of millions of years. So seeing a supernova in one is not all that unexpected. It does make the fifth Arp galaxy I\'ve imaged with a supernova going off in it. Arp often didn\'t realize it but many of his galaxies were highly disturbed and thus creating massive, short-lived stars destined to go out with a very big bang. In fact, SN hunters target many of them for this reason. A good paper on this galaxy is at: http://articles.adsabs.harvard.edu/full/1990PASP..102...41K

There was a lot of confusion about the SN on the net. Many at first thought the bright star to its west was the SN. That is just a star in our own galaxy. Though I found several web pages that still point to it as the supernova even though many images taken before the supernova show this isn\'t correct. When discovered, it was said to be magnitude 14.6 brightening to 14.4 the following day and 13.9 a few days later. Unfortunately, it was cloudy here until a sort of opening on the 21st. It closed before I could get but 4 luminance shots. I got the needed color on the 28th but clouds moved in on the blue frames. This cost blue in the fainter areas of the galaxy as it just didn\'t get through the clouds. Other problems with the mount driver conflicting with something in my computer has made getting further color data impossible so I\'m going with this. My quick estimate shows the star at 13.6 magnitude in my image. If you look at early images when it was fainter such as the discovery image at:
http://www.skyandtelescope.com/community/skyblog/observingblog/New-Supernova-in-Leo-136977918.html the SN appears far brighter than the two star-forming regions nearby. Yet it appears about the same brightness in my image. This is due to my stretching the image to bring out the galaxy. This reduced the contrast between the two. Measuring the actual data shows the SN to be about 5 times brighter than the star clouds. Many SN hunters use red sensitive cameras as well which would also increase the difference between the white of the SN and blue of the star clouds.

There are several galaxy clusters in the image. The one to the upper right is WHL J102522.5+170225 with 17 galaxies with no diameter given. Why the anchor galaxies distance is so different from the cluster\'s I don\'t know. The cluster below the galaxy is GMBCG J156.22001+17.21934 with 12 galaxies in an undefined area. At least its distance does match that of its anchor galaxy. A third cluster is further east and south of the galaxy, GMBCG J156.54392+17.04437 at 3.6 billion light-years. It contains only 8 galaxies but its distance is the same as that of the anchor galaxy. Southwest of the galaxy is yet another cluster; GMBCG J156.13244+16.99977 at 3.7 billion light-years. It\'s distance matches that of the anchor galaxy as well. It contains 10 galaxies in an unknown area. Several other clusters are noted in the image at NED but seeing nothing at those positions I didn\'t include them in the annotated image.

CGCG 094-040 is a rather obvious galaxy in the image but without any redshift data. I included it with a question mark for the distance. Likely it too is at the 0.61-0.62 billion light-year distance of the other CGCG galaxies in the image.

What\'s missing are any galaxies at the distance of Arp 263. It does seem rather alone in the universe yet apparently did merge with a companion. 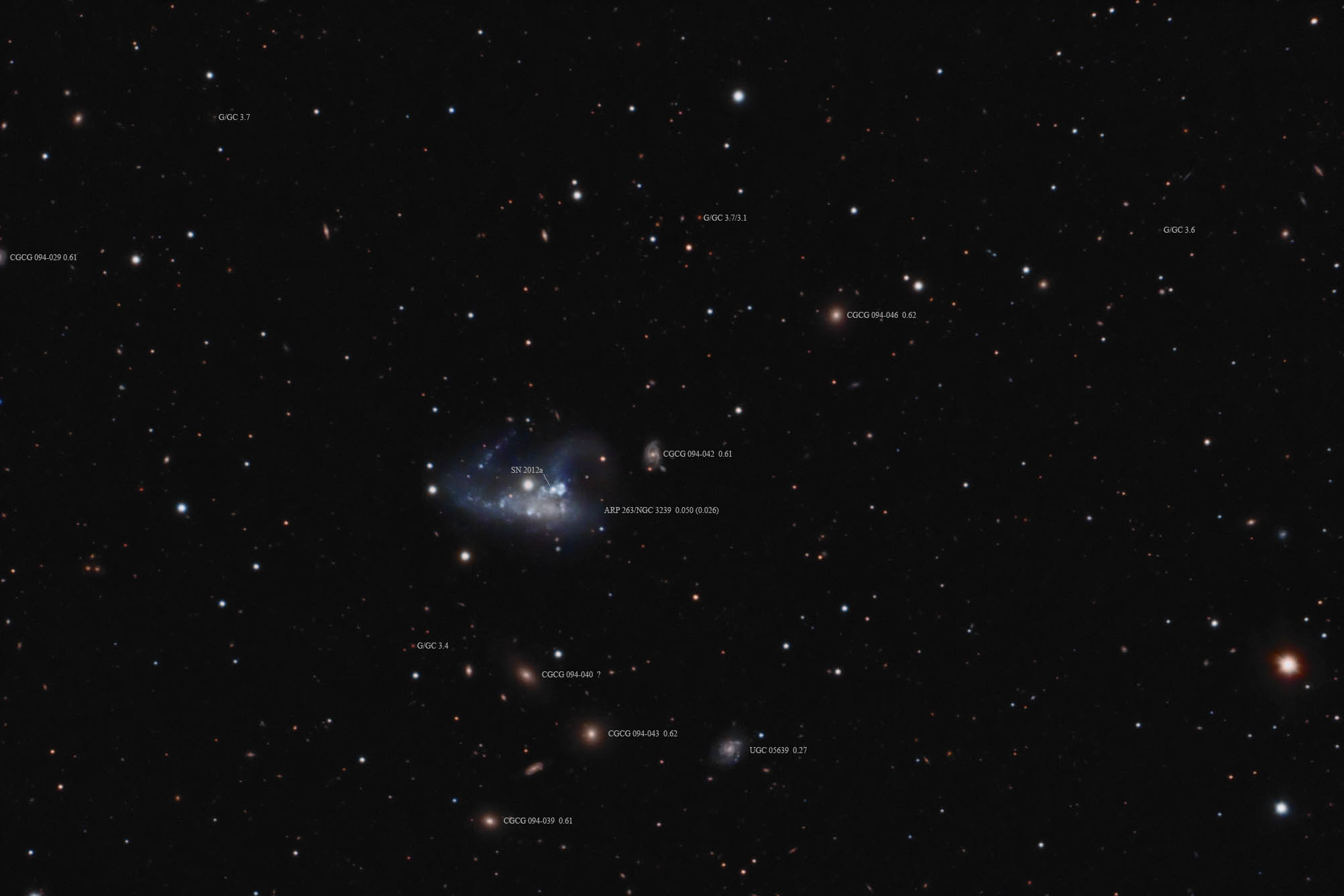 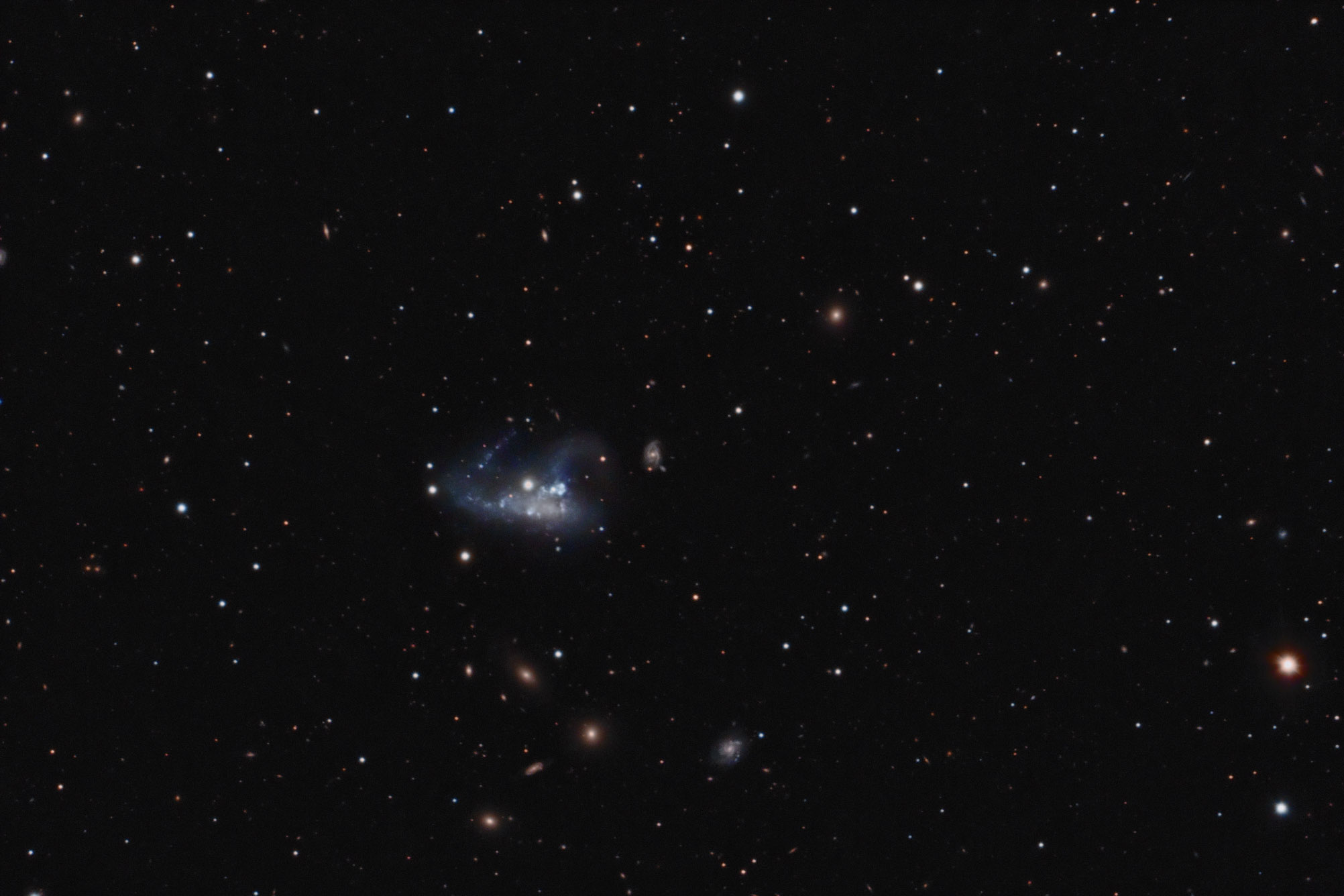 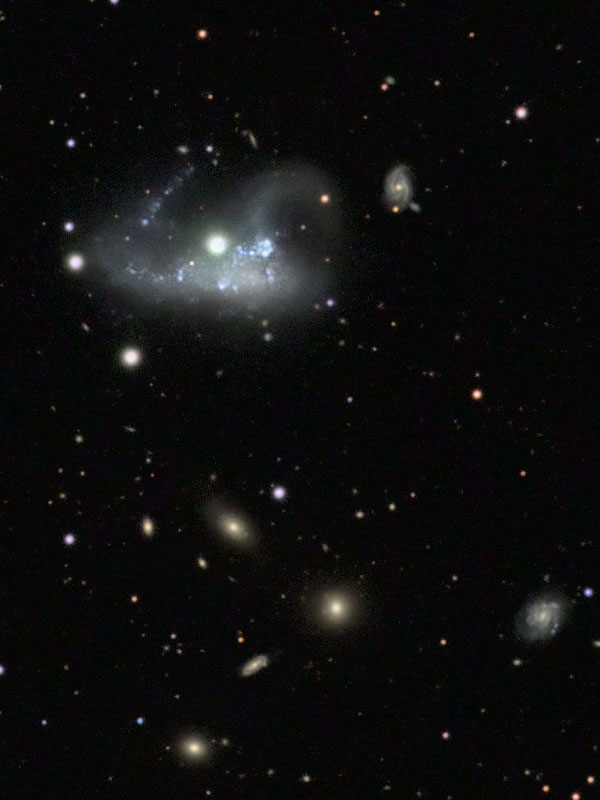