Arp 265/IC 3862 is a very odd object in Canes Venatici located about 210 million light-years away. Arp put it in his class galaxies with irregular clumps. Though a note at NED incorrectly says \"galaxies with adjacent loops.\" It is also known as IC 3862 which NED then splits into two galaxies only 2\" of arc apart! One is centered on the brightest part of the galaxy and the other two seconds west where little is to be found. The error circle for the location of the western galaxy is 1.25\" while that of the eastern is 0.5\" so they could nearly overlap and be the same object. One note at NED also says \"Possibly consists of two bodies.\" It certainly has the look of a possible merger in progress. Arp\'s only comment on it is \"Resolution of stars or knots.\" Southeast of Arp 265 about 14.3 minutes is KUG 1252+361. This is a distorted spiral at the same distance as Arp 265. A note at NED suggests it has a double nucleus. I doubt that but it certainly is distorted. It was discovered by Max Wolf on March 21, 1903.

When I go to research a field at NED I normally find the error circle for an object to be 0.5\" making identification easy. In this field, many objects are in error circles as large as 5\". Even objects from the Sloan survey have unusually large error circles. The object I identify as a quasar at 11 billion light years in the annotated image has a listed location that puts the object I\'ve identified as the quasar at the very top of the error circle. It is listed as 20.0 magnitude and that matches my reading on the object I\'ve labeled. There is nothing but black space where the catalogs put it. Interestingly, it isn\'t listed by any Sloan ID, only as [HB89] 1251+362, WEE 077 and [VCV2001] J125421.9+360039. Almost due east of Arp 265 is an object I show as both a galaxy and center of a galaxy cluster (G/GC). In NED it is listed 4 times, three with a redshift, none of which agree as to position, magnitude or distance. The error circles of all include the galaxy I\'ve assumed to be the cD galaxy of the group. Two of the three entries calling it a galaxy have redshifts listed as 2.6 and 2.7 billion light years but the cluster is listed at 2.8 billion light years. I\'m used to things clicking with an accuracy of a few hundredths of a second of arc but here I vary from the catalogs by up to 6\" of arc on some objects. Those few with small error circles I am getting to my usual accuracy so don\'t think it is my measurement that\'s off. Never thought I\'d say that but seems correct. The galaxy cluster is MaxBCG J193.58591+36.08206 and is listed as having 19 members but no diameter is given.

There are some distant objects in this image. A quasar at 11 billion light-years and a galaxy in the upper right corner at 5.2 billion light years. 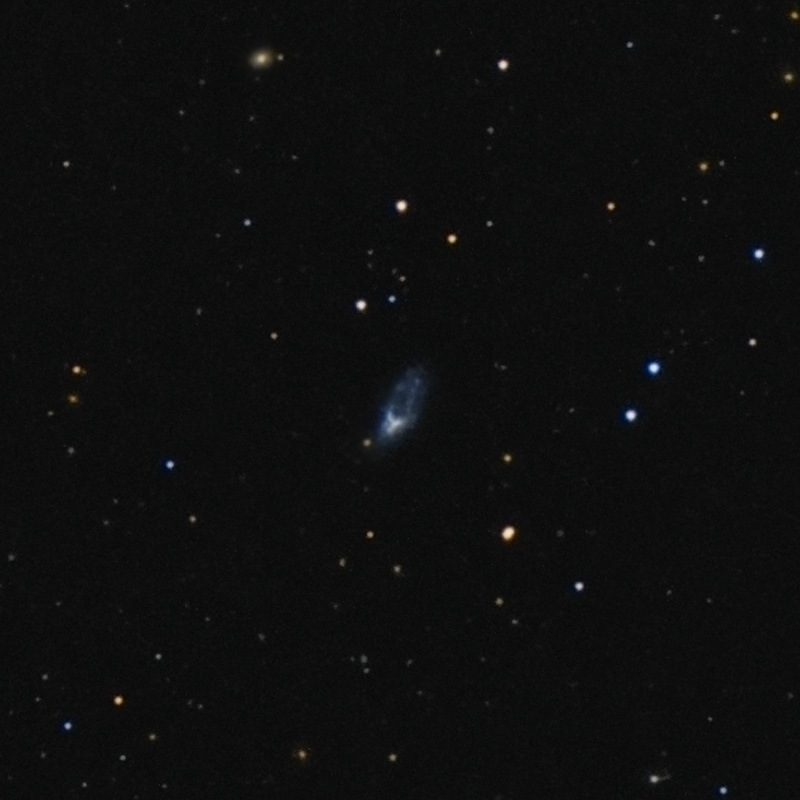 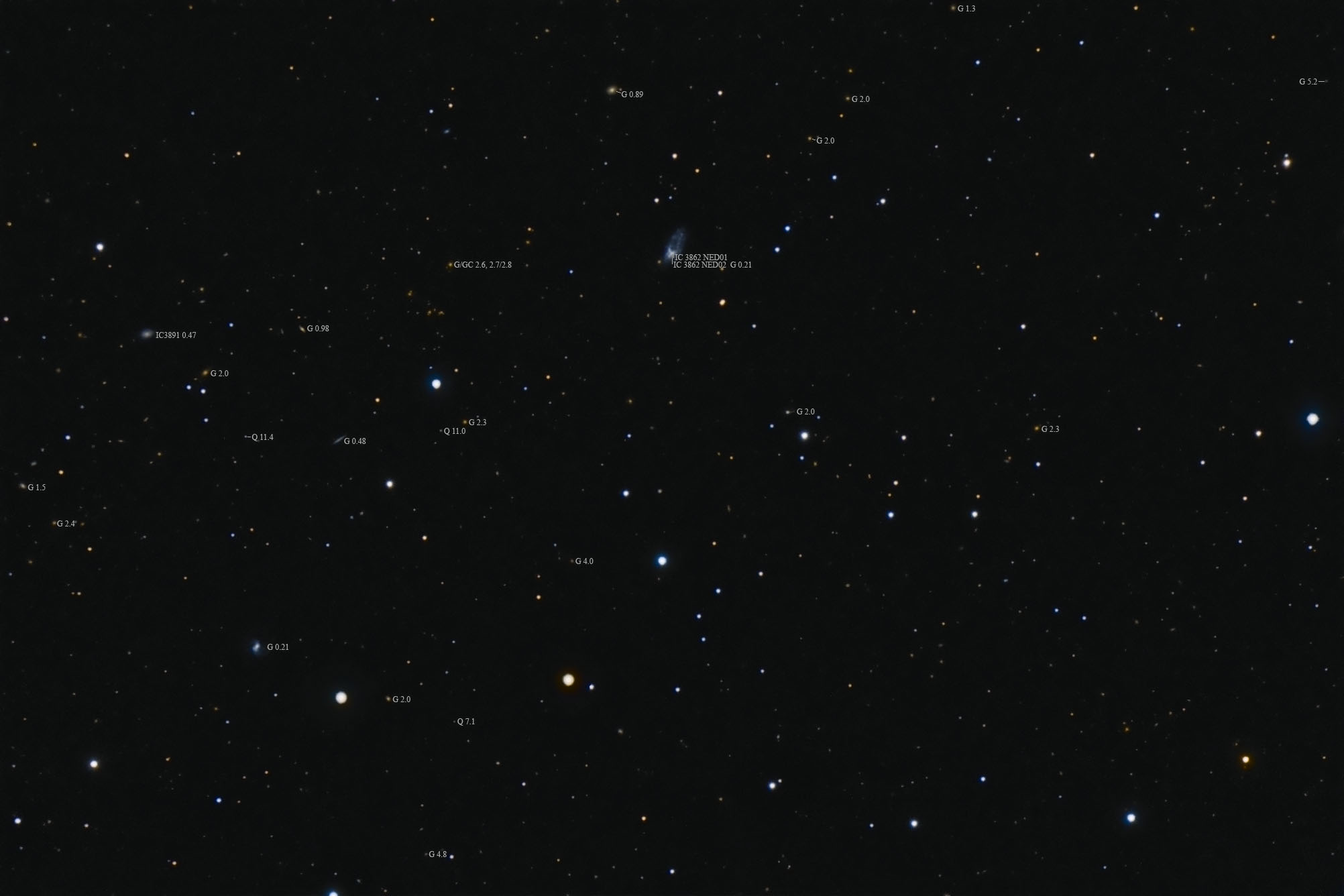 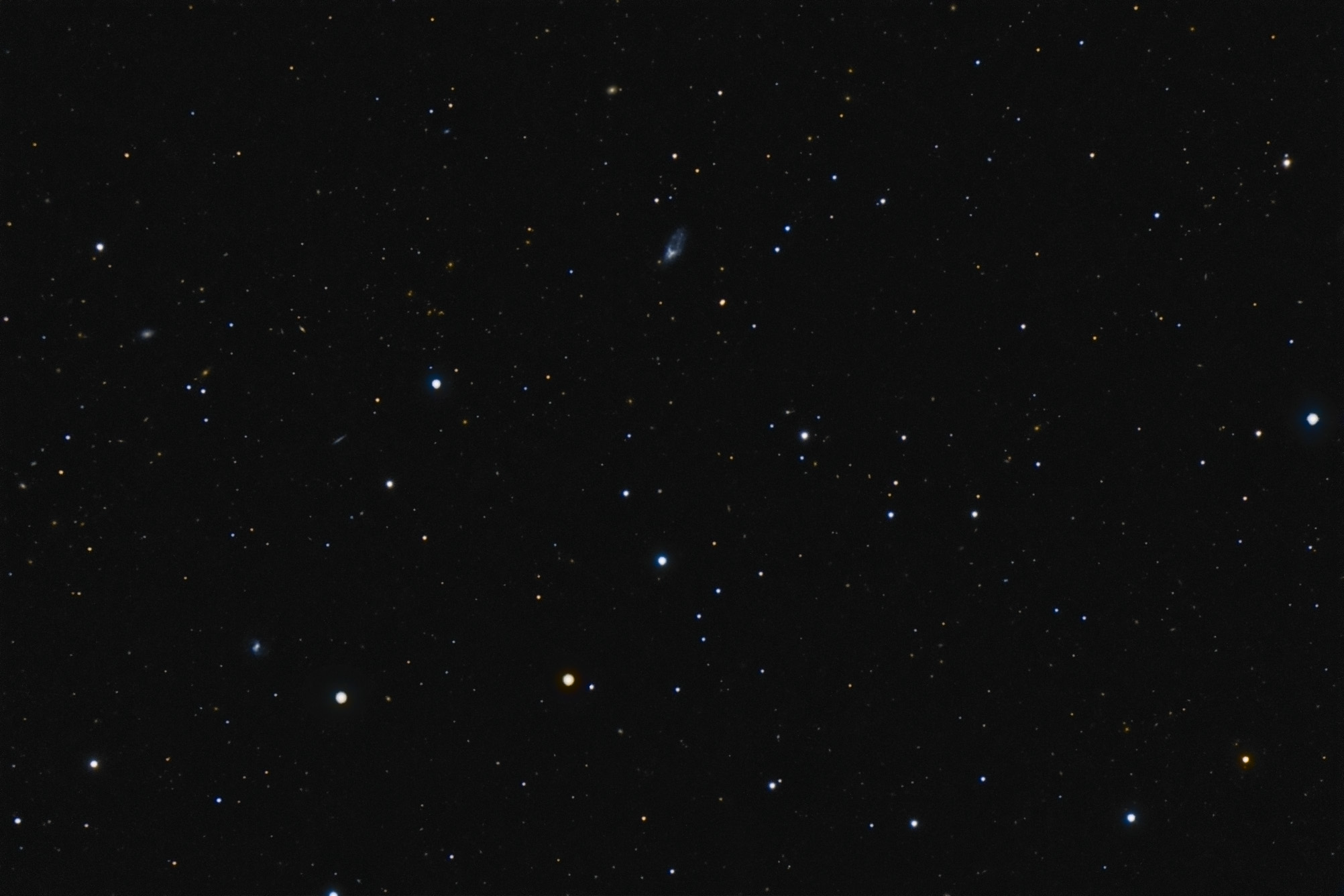