Arp 268/Holmberg II is part of the M81 group and is located about 3 megaparsecs from us, about 10 million light years. It is classed as a Magellan type irregular galaxy. Arp classed it under \"Galaxies (not classifiable as S or E); Irregular clumps. Being close and having blue giants up to 19th magnitude I was able to resolve many of its brighter stars and star clusters. Arp\'s comment: \"Resolution of stars: Note linear loop of emission regions.\" I\'m not sure how a loop could be called linear but I\'m sure he is referring to that looping feature on the east side (left) of the galaxy. The CGPG catalog notes: \"Large post-eruptive blue irregular with compact core and many knots.\" I\'m not such what is considered the core of this guy. I can\'t say I see it in any image I looked at.

There are several interesting galaxies in the field. Above and slightly left is the oddly red spiral NPM1G +70.0037. I find no distance estimate. Galaxy Zoo in studying the Sloan Deep Sky Survey images has discovered a new class of spiral galaxies, red spirals. This appears to be one of those. Spiral arms are usually very blue as this is where new star formation is going on. Without current star formation, it was thought the spiral structure would quickly break down. So this class of spirals is a real problem to explain.

Down and to the left of the red spiral is the double spiral KUG 0815+709. Apparently, that bright spot on the upper arm is a second galaxy. Both it and the red spiral are strong IR emitting galaxies.

Most galaxies in the image are anonymous, including the interesting looking spiral below the double spiral KUG 0815+709 and the narrow edge on spiral seen through Arp 236\'s east side just above that loop of star forming regions. I\'d love to know more about it but couldn\'t find even a mention of it anyplace.

There is a large galaxy cluster centered just above my image, RX J0819.3+7054. Some of its members are seen along the top center of my image. They are somewhat reddened by their great distance of about 2.7 billion light years. None were listed individually, however. Therefore I can\'t separate which are cluster members and which are just background galaxies. Two other clusters are listed in this region to add to the confusion of who belongs to what.

An excellent image of this galaxy taken by the 10 meter Keck telescope is at:
http://cse.ssl.berkeley.edu/bmendez/pics/TRGB/Holmberg_II.jpg

Arp\'s image of this galaxy is one of his best, indicating a very good night atop Palomar mountain.
http://ned.ipac.caltech.edu/level5/Arp/Figures/big_arp268.jpeg
Arp\'s image was taken in blue light it appears to show the super hot blue stars recently formed in the galaxy. 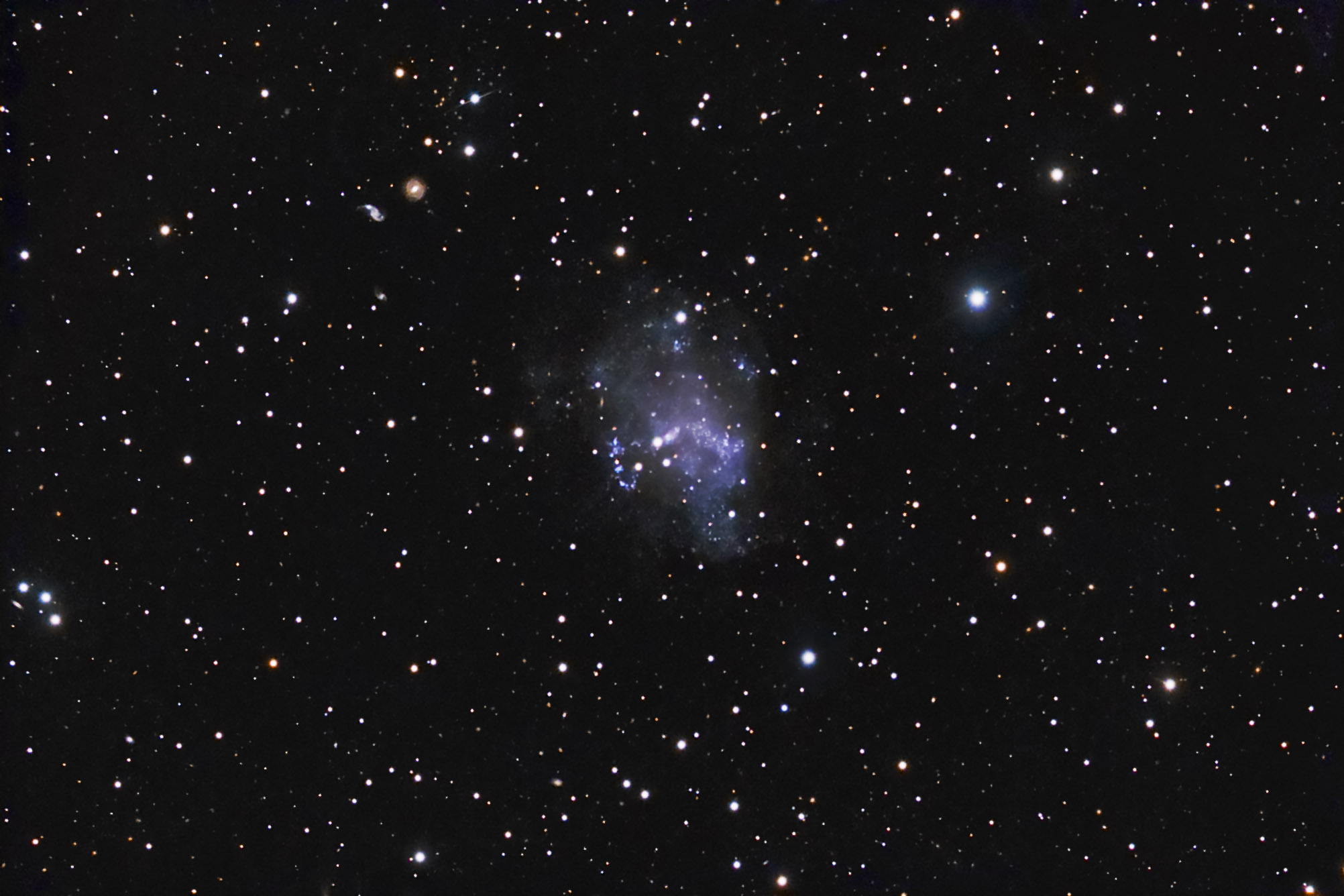