Arp 282 is an interesting interacting pair just under 200 million light years from us. It consists of a large but distorted spiral, NGC 169, and a small companion with tidal arms, IC 1559. Ned calls the small companion a SAB pec though I see no hint of spiral structure. Most papers I saw classed it as E3 or S0 which makes more sense to me. Arp classed the pair as Group character: infall and attraction, whatever that means. He explained a bit saying \"Companion appears to rain into the nucleus of spiral.\" The famous Whale galaxy, Arp 181/NGC 4631 is similarly classed by Arp.

Distortions to NGC 169 include a core that is well west (left) of center as something seems to have drawn the arms on the east side way away from the core. Likely the companion passed by this side sometime in the past. While the companion seems to be \"falling\" into the core it likely is well in front of the galaxy after looping around the east end. The orbit is likely unstable and the two will eventually combine some time in the future. Note too that NGC 169 seems to have a large bulge of halo stars \"above\" (north) of the plane of the galaxy. This would indicate the companion may have made several passes to cause both tidal distortions.

Note at NED makes the following comments on the pair: \"These two galaxies have dramatically different colors; galaxy A has very blue, star-forming colors; galaxy B displays the colors of a reddened elliptical, yet has a disk morphology.\" I assume A is IC 1559 and B NGC 169. Another note says: \"Pair in contact, made up of NGC 0169 and IC 1559 MRK 0341 = IC 1559, a small peculiar lenticular.\"

The MGC catalog says of IC 1559: \"It is of elliptical shape with the major axis having stubby ends. The continuous spectrum is diffuse in the blue-violet region and becomes brighter in the ultraviolet. H{alpha} is observed.\" Both galaxies were discovered by R.J. Mitchel on September 18, 1857.

I had a lot of problems processing this image due to the bright star, SAO 78148, right beside the pair. It is a K2 giant of 6th magnitude and cast all sorts of junk across the image that was a major pain to deal with.

The third member of this group, 11 arc minutes to the SW (lower right) is NGC 160. It is at about the same distance as Arp 282. It is classed as SA0(r) pec. One note says of it: \"Very small nucleus, isolated at center of faint double (R). Non-interacting pair with NGC 0169.\" That is, it has a double ring structure. I assume that refers to the inner yellowish band around the core as well as the bright bluish outer edge to the galaxy. Normally the outer edge of a spiral fades away but this one ends abruptly after a narrow suddenly brighter rim. Some stars are seen outside this bright rim at either end but they also seem to end abruptly rather than fade into the background. So did it interact with Arp 282 sometime in the distant past to get this odd structure? NGC 160 was discovered by William Herschel on December 5, 1785 but isn\'t in either of the Herschel 400 observing programs.

Above NGC 160 and right of the bright star is UGC 354 at 240 million light years. A bit farther than the others but possibly a group member. Note that some catalog listings incorrectly show it as NGC 162. The Sky\'s database has this error. The description of NGC 162, however, shows it to be a very different object. It reads eF, stellar, 160 sp which translates to extremely Faint, starlike, NGC 160 south preceding. But UGC 354 certainly isn\'t starlike, nor extremely faint nor is NGC 160 preceding it across the sky but following it. Thus most feel that NGC 162 is one of many stars incorrectly thought to be faint galaxies when seen at the very limit of visibility in scopes of the era. It is likely the star east (left) of the top edge of NGC 160.

These 4 are the only galaxies in the field that NED shows redshift data. About 15 more galaxies are cataloged in NED (all IR emitting in the 2MASX catalog) though a few also carry extended LEDA designations. Thus most of the galaxies in the image are anonymous as far as I can tell. 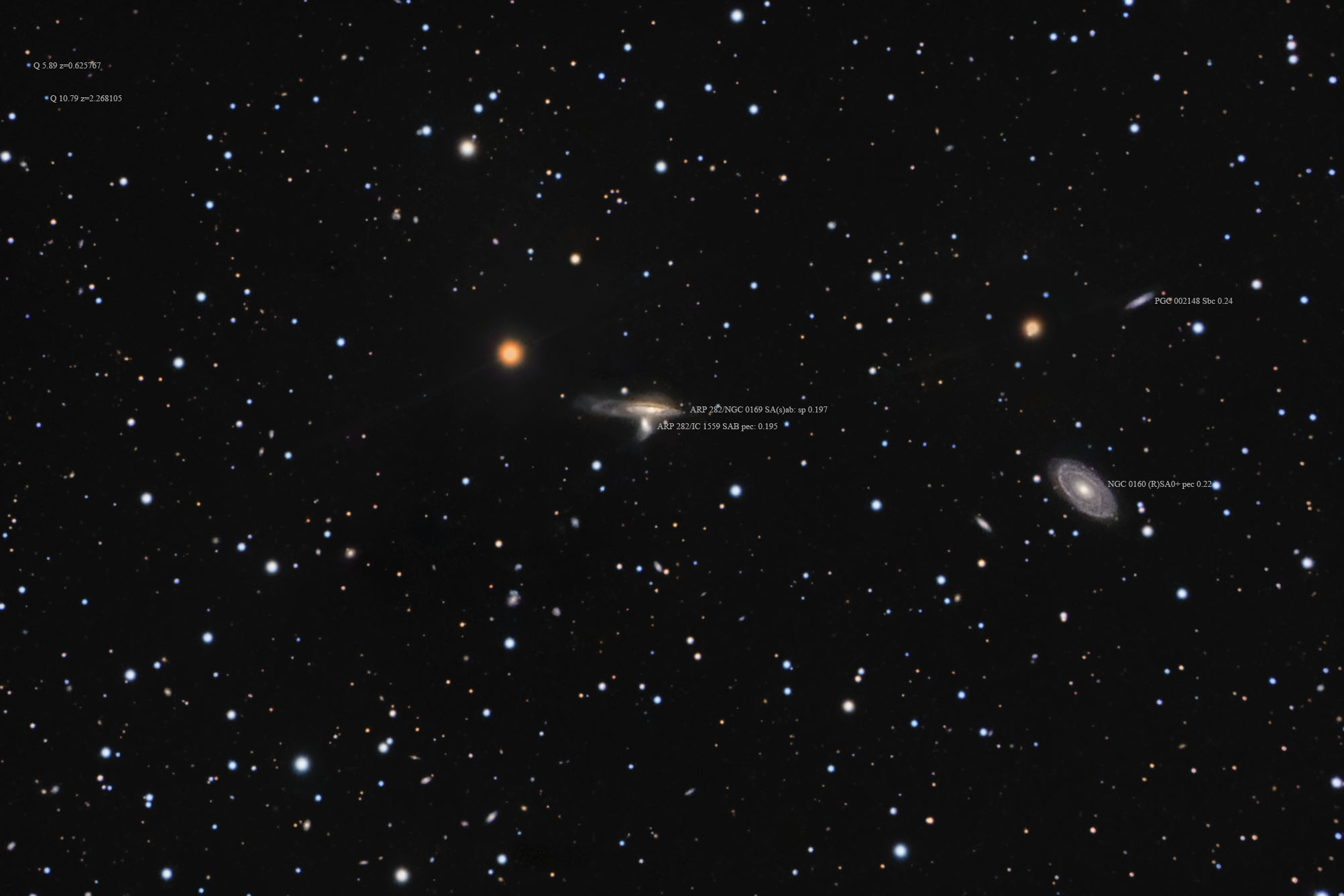 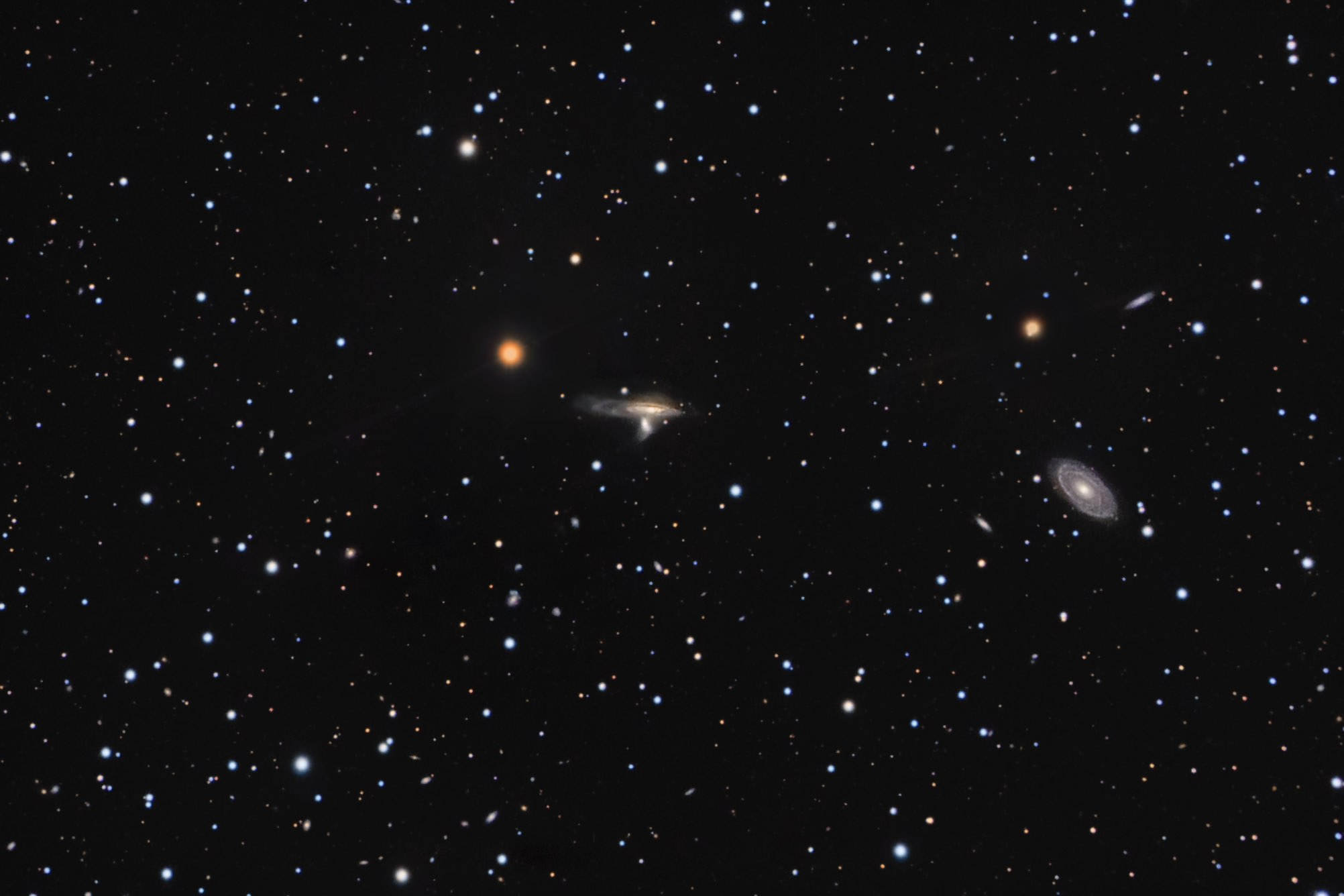