Arp 283 consists of two interacting galaxies, NGC 2798 right and NGC 2799. Arp classed them under Group Character: Infall and attraction. He adds this comment: \"Arc of barely resolved knots curves into nucleus of larger galaxy\". It does appear the interaction has created huge tidal plumes on NGC 2798 and has warped the disk of NGC 2799 into a sort arc. Unfortunately the night I imaged this wasn\'t very good with below average seeing and transparency so this image is well below what I\'d have liked. Still, you can see a hint of the curve of NGC 2799\'s arc toward NGC 2798. This could be just a perspective illusion.

NGC 2798 is classed as an SBa or SBb galaxy depending on who you read. In any case, it is classed as a barred spiral. Its core seems so distorted. I don\'t see much of a bar and the spiral arms seem to come from nothing rather than end of a bar as you\'d expect. Their beginning ends are 180 degrees apart as you\'d normally see with a barred spiral. The interaction has obviously greatly altered the galaxy.

It shows no new stars in visual light but IR data shows massive star formation going on hidden behind extensive dust. The core region contains most of this star formation. The spiral arms are quite red, rather than blue. I can\'t tell if this is real or scattered dust has absorbed much of the bluer light letting only red through. It was discovered by William Herschel on January 14, 1788 though he missed NGC 2499 or more likely saw them as one object. It isn\'t in either of the Herschel 400 observing programs.

NGC 2799 is seen nearly edge-on. Most sources consider it an SB galaxy, that is a barred spiral, but a few consider it as Sc. Considering it is edge on and highly distorted this is an argument that I doubt can be settled.

The pair appears to be about 90 million light-years away.

Actually, this is a three galaxy system. The spiral below them, UGC 4904, shows the same redshift as the two others. It too shows strong signs of interaction. In fact, it resembles M64 as being a \"black eye\" type galaxy though, in this case, is more a \"reddish brown eye\" in my image. The core also seems made up of several condensations with only a rough indication of spiral structure. It too is classed as a barred spiral though it appears too chaotic for me to see that structure. It may show at other wavelengths, however. In any case, it appears all three have interacted with each other.

Starting at the lower left corner move along the bottom, under a star then pass over a much fainter one and you come to a small galaxy most of which is in the frame with only its very south end cropped. This is SDSS J091831.58+414533.0 at 1.3 billion light years. Up and to its right is a somewhat larger redder and brighter galaxy. It is 2MASX J09182805+4146242 at 1.8 billion light years. It obviously is a really big galaxy to be magnitude 17.5 at that great distance.

There are other galaxies and quasars in the image. The above galaxies and the other distant objects are shown in the annotated image with their distance in billions of light years per NED using their 5 year WMAP data.

My image has several very distant quasars so I\'ve also attached an annotated image point these out and the distances to some of the other galaxies in the image.

This one is located in Lynx. Arp\'s image is at:
http://ned.ipac.caltech.edu/level5/Arp/Figures/big_arp283.jpeg 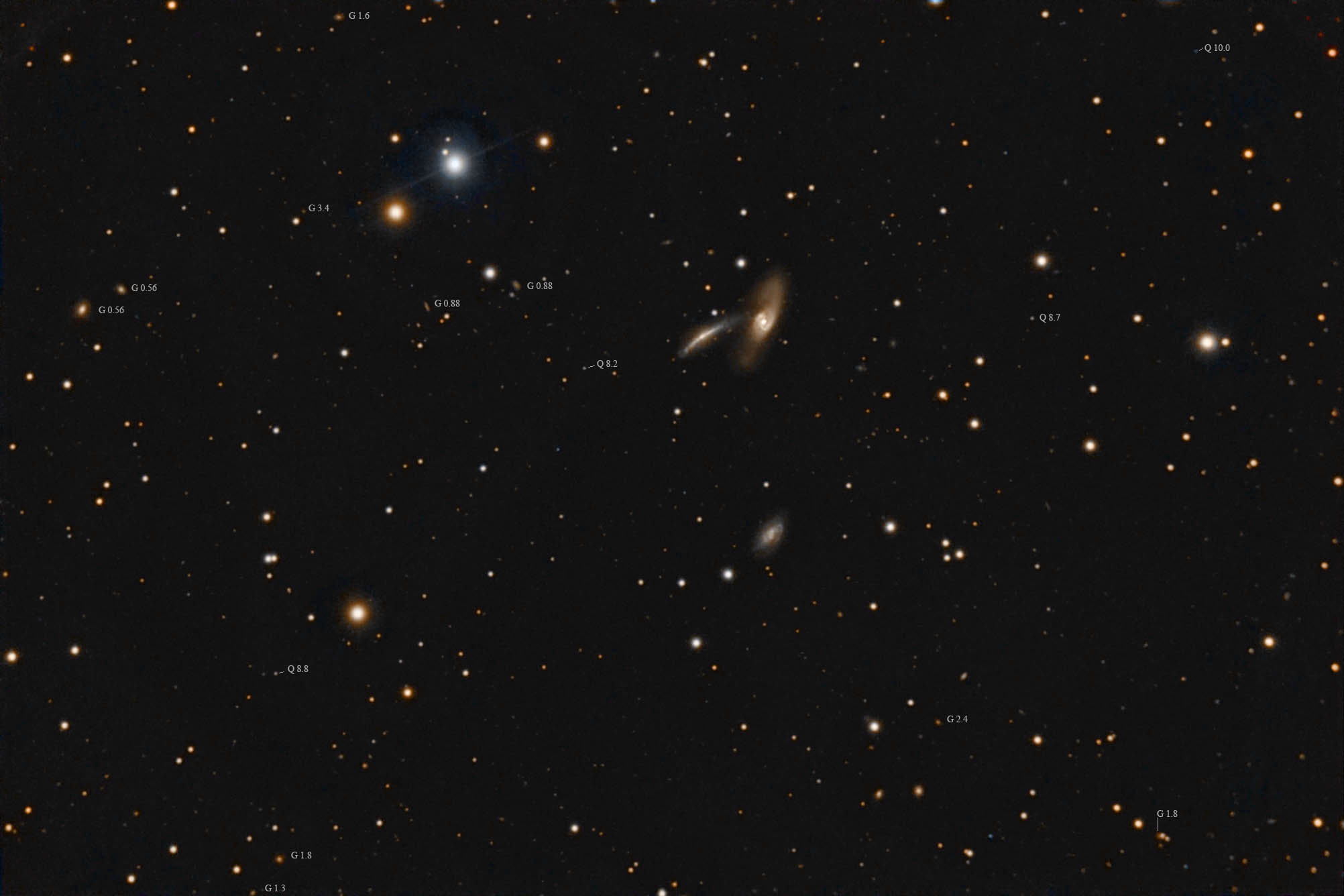 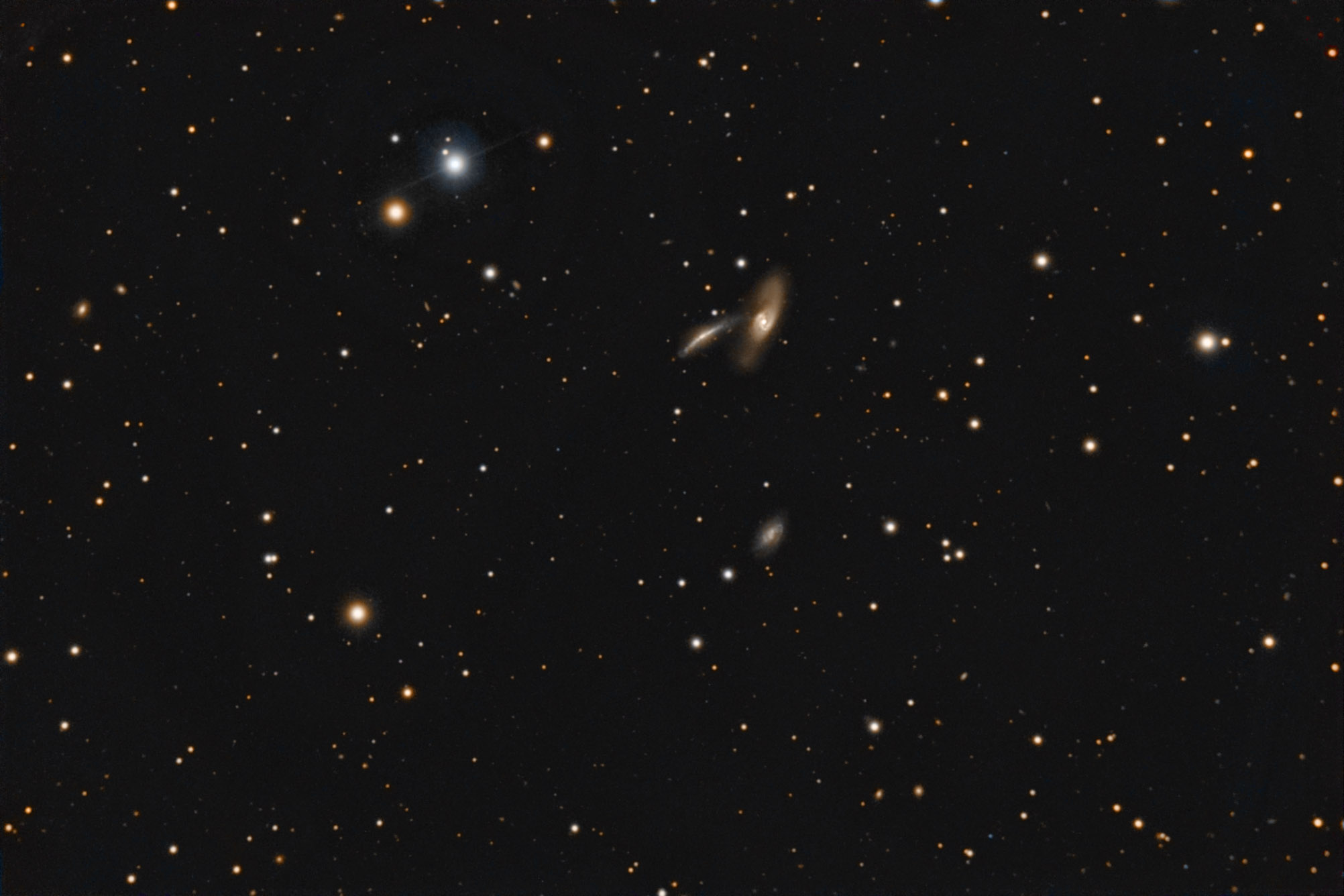