ARP 284 is a pair of interacting galaxies NGC 7715 and NGC 7714 left to right. Arp classifies these under the heading of \"infall and attraction\" whatever that means. They are located a bit over 100 million light-years away in the constellation of Pisces. NGC 7714 is a starburst galaxy. It has strong H alpha emission though I didn\'t take it in that light so it\'s not well seen in my shot. The starburst occurred some 3 to 9 million years ago. Note the odd reddish tidal arm at the lower right that just doesn\'t seem to fit the rest of the galaxy. The red color is due to mostly H alpha light so it is one huge area of ionized hydrogen. The companion NGC 7715 has H alpha emission and is not a starburst galaxy. It is classed as an irregular galaxy and is not an edge on spiral as it might appear. 7714 is an SB spiral that has been highly distorted by the interaction. Its core has emission lines that classify it as a LINER galaxy, a type with an active black hole in its nucleus.

The bright star at the upper right is also very interesting. It is SAO 128268 and is 126 light years away. What is interesting is that it is moving very rapidly through the sky. I was checking the POSS1 plates taken in the 50\'s at the Hale Observatory on Mt. Palomar when I noticed it wasn\'t in the same place as it is in my photo. Click this link http://stdatu.stsci.edu/cgi-bin/dss_search?v=poss1_red&r=23+35+25.46&d=%2B02+13+48.6&e=J2000&h=15.0&w=15.0&f=gif&c=none&fov=NONE&v3= to see that plate image. Note the two stars on either side of it are above it in that photo yet below it in my shot. It is moving upward and a bit to the east at a rate of about 1/3rd of a second of arc per year. In the approximately 50 years between the photos, the motion is quite obvious. Some stars show a high proper motion (movement through the sky) because they are close, Barnard\'s star is an example, while others do so because they really are moving fast. In this case, it is a little bit of both. NGC 7714 was discovered by John Herschel on September 18, 1830. It\'s not in either Herschel 400 program. NGC 7715 was discovered by Bindon Stoney on November 4, 1850. An HST image of NGC 1714 is at: http://cseligman.com/text/atlas/ngc7714hst.jpg but only shows a short piece of the arm that connects the two.

The star just below Arp 284 is one of the very few in all my images that is visible to the naked eye. It shines at magnitude 5.7 which means you can just barely see it on a dark moonless night from a location far from any lights. Averted vision (that is not looking right at it but somewhat to the side) will likely be necessary to see it. So it isn\'t an easy star to see but it can be seen. Unfortunately, that makes it so bright it made processing this image very difficult. Most of the scientific papers on the galaxy pair mention their measurements are likely tainted by the glare of the star so even the big boys are bothered by it. It is a spectroscopic double star about 100 light-years away known as HD 221950 or 16 Psc. The latter indicates it is a naked eye star, the 16th in Right Ascension order in the constellation of Pisces. These numbers were assigned long ago so precession (a ~26,000 year wobble of the earth\'s axis) has changed the RA order of the stars in some cases but the original order numbers have been kept.

I\'ve prepared a rather sparse annotated image that has little on the close galaxies but for those in ARP 284 but does show much more distant quasars and a galaxy cluster. Arp made a big deal about quasars around his active galaxies claiming the redshift of them had nothing to do with distance. By his logic, they weren\'t active massive black holes in distant galaxies but were something ejected from active galaxies. Redshift somehow related how long ago they were ejected. Higher redshift indicated they were ejected before those with lesser redshift. Somehow this involved electrons that changed with age. I\'ve tried reading several of his books and other books trying to explain his logic and I end up a screaming basket case each time so may have this somewhat scrambled. With all the quasars around this actively interacting pair, he\'d have had a field day though all have a rather similar redshift. I\'ve not dug through his books to see if he mentions this one or not. My brain can\'t handle much more of his ideas. 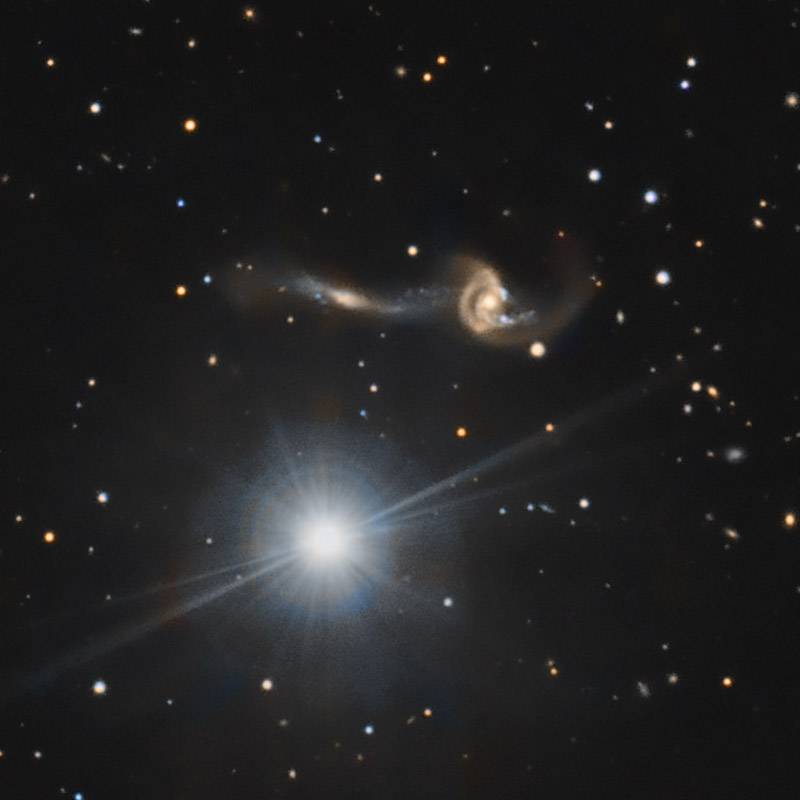 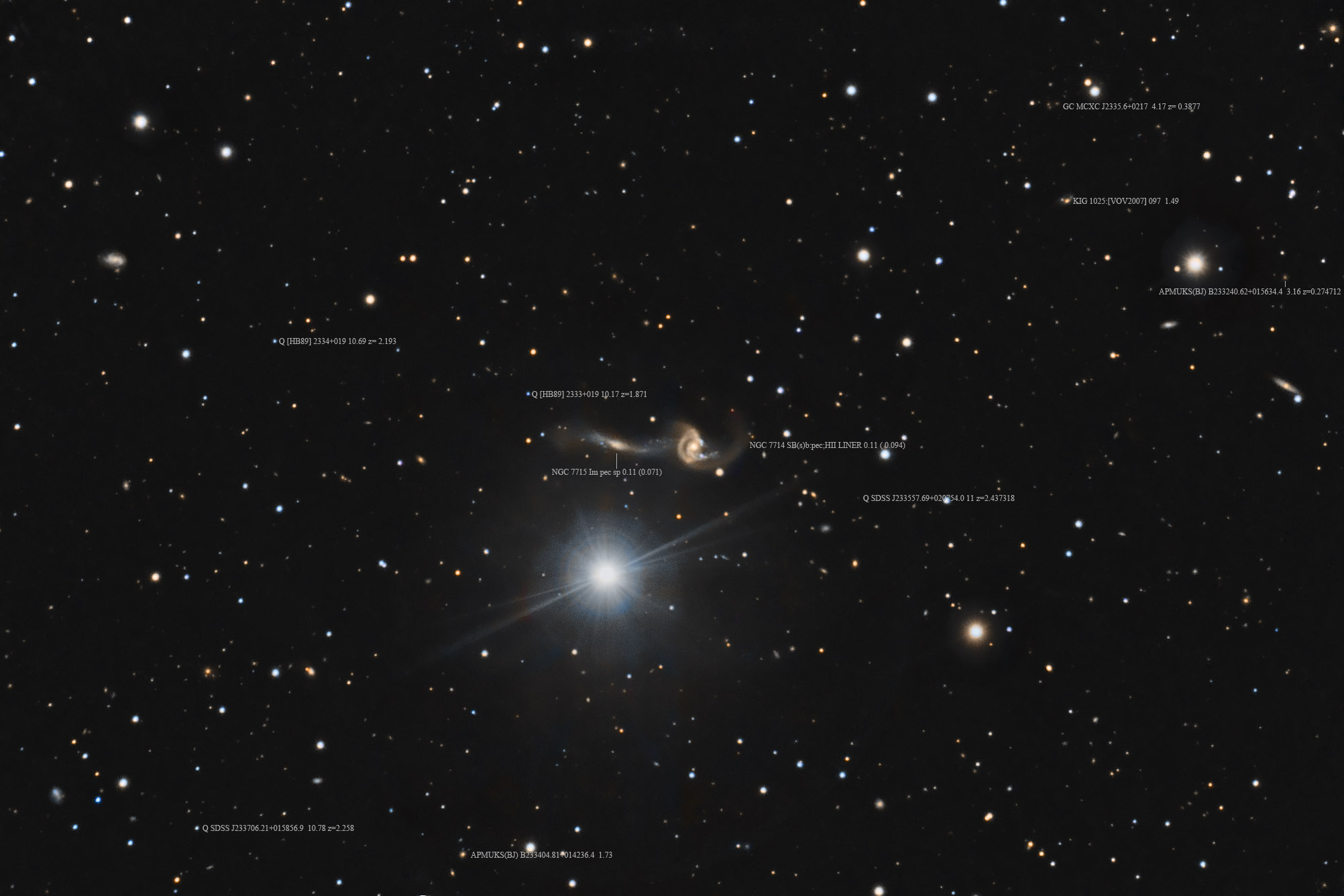 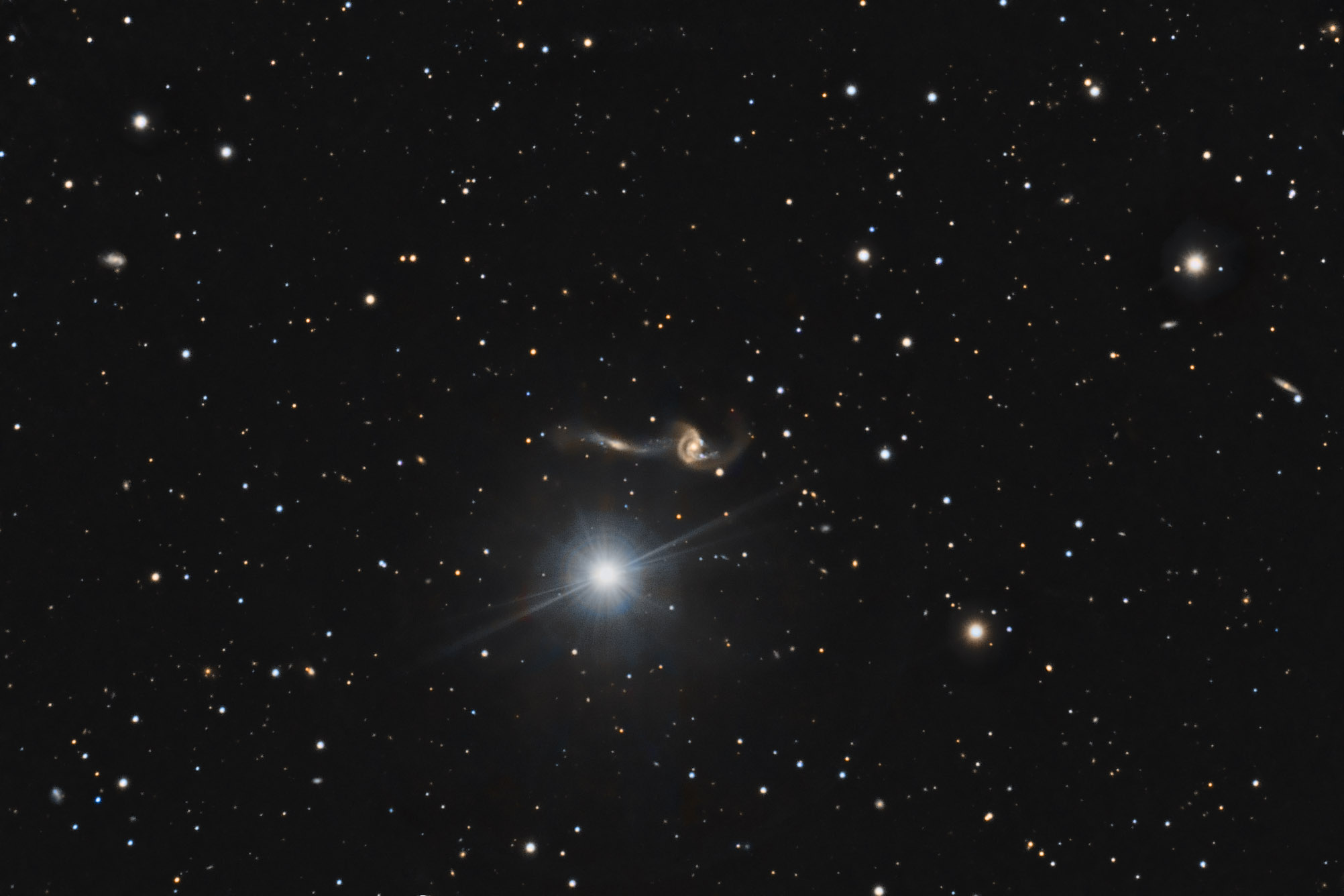