ARP 287 is a pair of interacting galaxies, also known as NGC 2735 and NGC 2735A, located in northern Cancer. Arp put these in his category: Double galaxies, Wind effects. In fact, it is the very first entry in this category. Arp said of the pair: \"Slanted parallel streamers off each edge of main galaxy.\" That certainly is the case. They certainly are strange compared to the standard plumes seen in interacting galaxies. Many years ago I spent many days playing with software to model interacting galaxies. I found it easy to make all varieties of \"normal plumes\" seen in his catalog but I never could make the \"wind effect\" type no matter what I did. Such software was primitive (as was the computer) compared to today\'s, still, I\'ve not seen a simulation that creates these types of plumes. If anyone has run across one please let me know. Besides the streamers note that there is a dust lane between them that extends completely across the main galaxy to the companion. So are the streamers really coming from the companion as the dust lane appears to be? Seems possible to me.

Redshift data at NED puts the main galaxy at about 125 million light years and classes it as SAB(rs)b? pec. Many papers, however, class it as a \"Red SBa\" spiral. The companion is a blue compact galaxy classed as Im: pec and showing a redshift that puts it a bit further away at 130 million light years. This difference is easily within the normal range of galaxies in groups. They are likely at virtually the same distance. The thin sliver of a galaxy to their east (left) is also at the same distance (SDSS J090253.00+255612.5). So this is more of a triple than a double system. It just isn\'t interacting with the other two. NGC 2735 was discovered by Édouard Stephan on February 26, 1878.

Arp later noted that quasars seemed to be found around his strangest galaxies and thought that the low redshift ones were nearest the galaxy and the largest redshifts belonged to the most distant. Most astronomers considered this coincidence but it led Arp the belief that some, if not all, quasars were actually nearby objects ejected from these strange galaxies. He even came up with what many would call crackpot physics to support this idea. This and other factors led to him being kicked off the 200\" scope and sent packing for Europe where a few still thought at least some parts of his ideas needed to be further investigated. Few if any buy them today, however. Geoffrey Burbidge, who died before Arp, was one of the few that still held out hope for non-cosmological redshift but not using Arp\'s \"warped\" physics. `In the case of Arp 287, there is a \"nearby\" quasar just north of the main galaxy that is \"only\" 4.9 billion light years distant. See the annotated image to find it. A bit further out along the same line is one 8.2 billion light years out and following the line the other way even further is one of 11.6 billion light years. But if you go further the idea breaks down with a quasar to the northeast of the last one that is only 4.4 billion light years away, the lowest redshift of all. But if you want to save the nutty idea then maybe these are something different. It was partly due to Arp\'s ability to rationalize away exceptions that helped ruin his reputation. All scientists constantly come up with wrong ideas. The good ones know when to let go and move on. For some reason, Arp found this impossible as to his anomalous redshift idea.

The annotated image. as usual, shows the distances to galaxies and quasars in billions of light years. The limiting magnitude of the image appears to be about magnitude 23.5 for the processed image. The raw luminosity images goes a bit deeper. I\'ve labeled one such galaxy with its green magnitude. It is one of dozens you will see if you enlarge the lower southeast portion of the image. To me it appears there\'s a galaxy cluster there but I found none listed at NED for this area. Looking at the image though you will see the galaxies tend to fall into groups. There\'s one at about 1.1 to 1.3 billion light-years, another at about 4.3 to 4.7 billion light years. If there\'s no redshift listed by an object that means I didn\'t find one at NED. This includes some rather \"bright\" galaxies.

The image contains 6 asteroids. Late evening images to those a few hours after local midnight show those that are moving in retrograde motion if near the meridian where I image. Thus they move \"backwards\" from east to west as we pass them taking our shorter and faster inner track around the sun. But this image was taken just before dawn and caught them in their \"normal\" west to east motion. So they are moving right to left. But the tracks are short indicating they soon will be changing to retrograde motion. The short tracks make them harder to pick out so I\'ve labeled them in the annotated image. 3 are magnitude 19.7. The obvious bright one above Arp 287 is magnitude 18.6. The faintest at magnitude 20.1 is just above a \"small\" galaxy in the lower right corner. The one right on the bottom edge near the right edge as well is 19.9, I barely caught it. One of the 19.7 ones is named Desai. Seems if you do well in the Intel (used to be Westinghouse) science contest you get an asteroid named after you. This is the second I\'ve run across in my images. The naming citation reads: \"Kshitij A. Desai (b. 1992) was awarded second place in the 2008 Intel International Science and Engineering Fair for his medicine and health sciences project. He attends the Michael E. DeBakey High School for Health Professions, Houston, Texas, U.S.A.\" Do they have high schools for astronomy professionals? 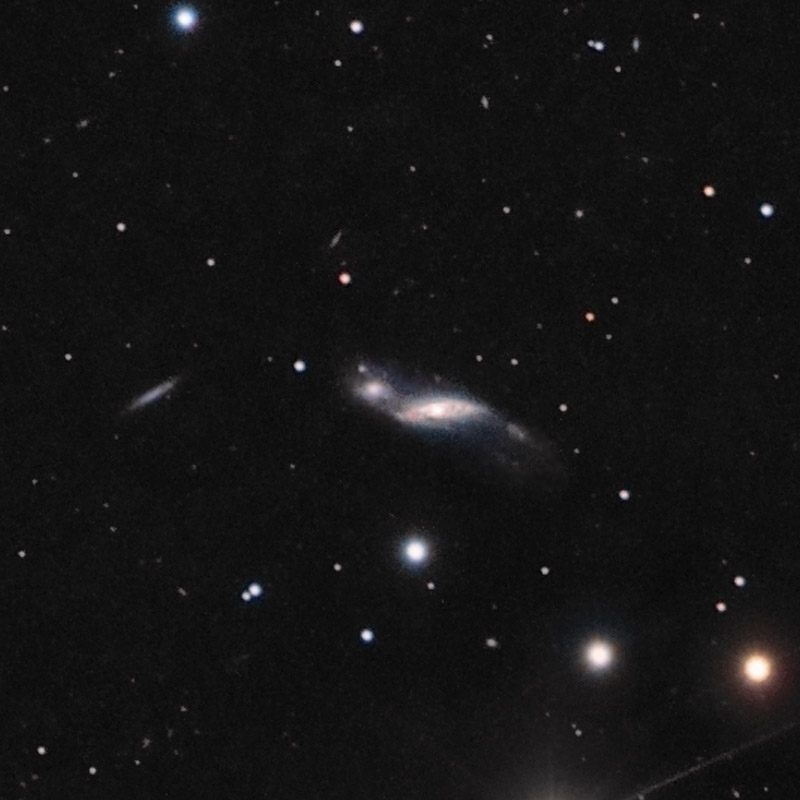 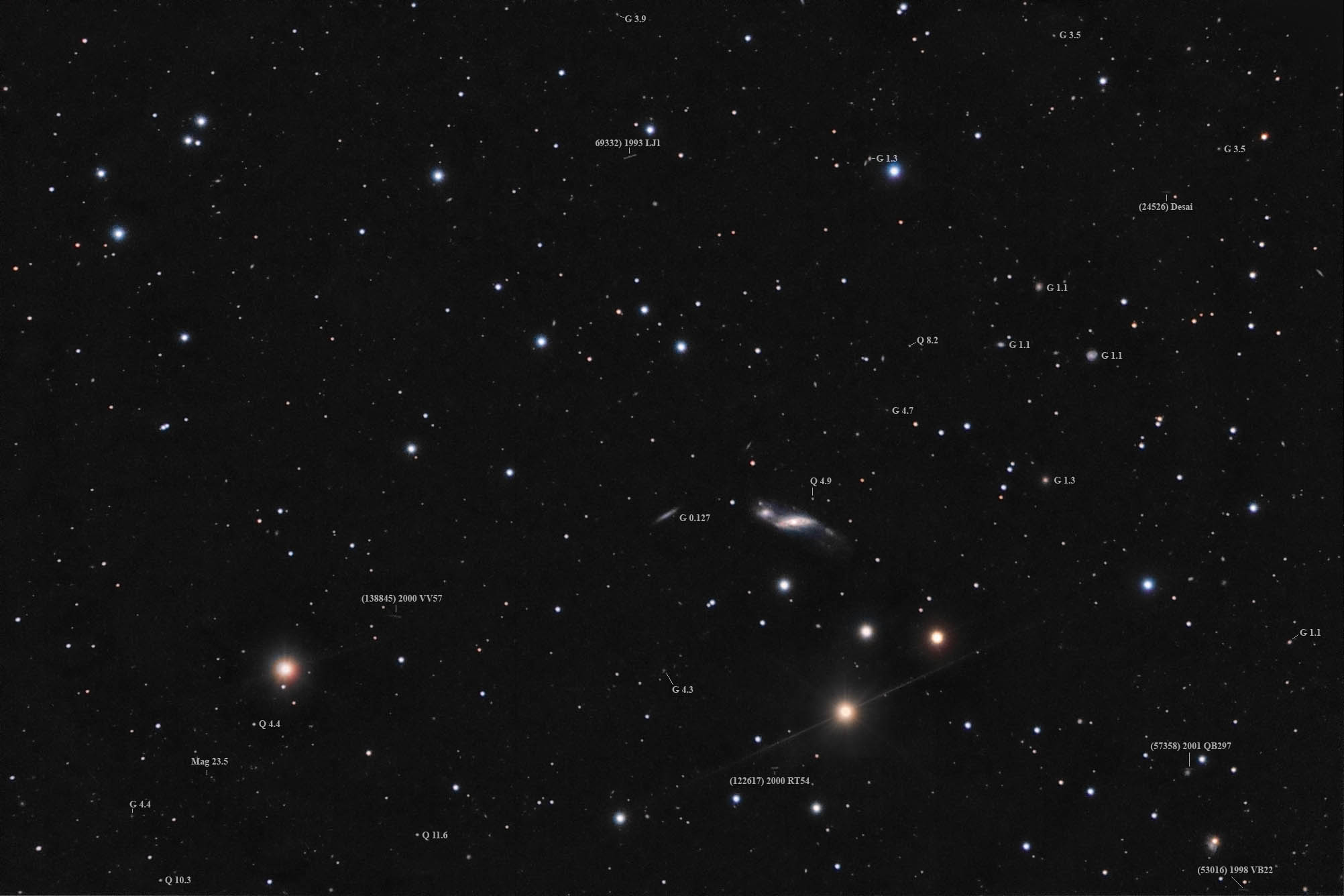 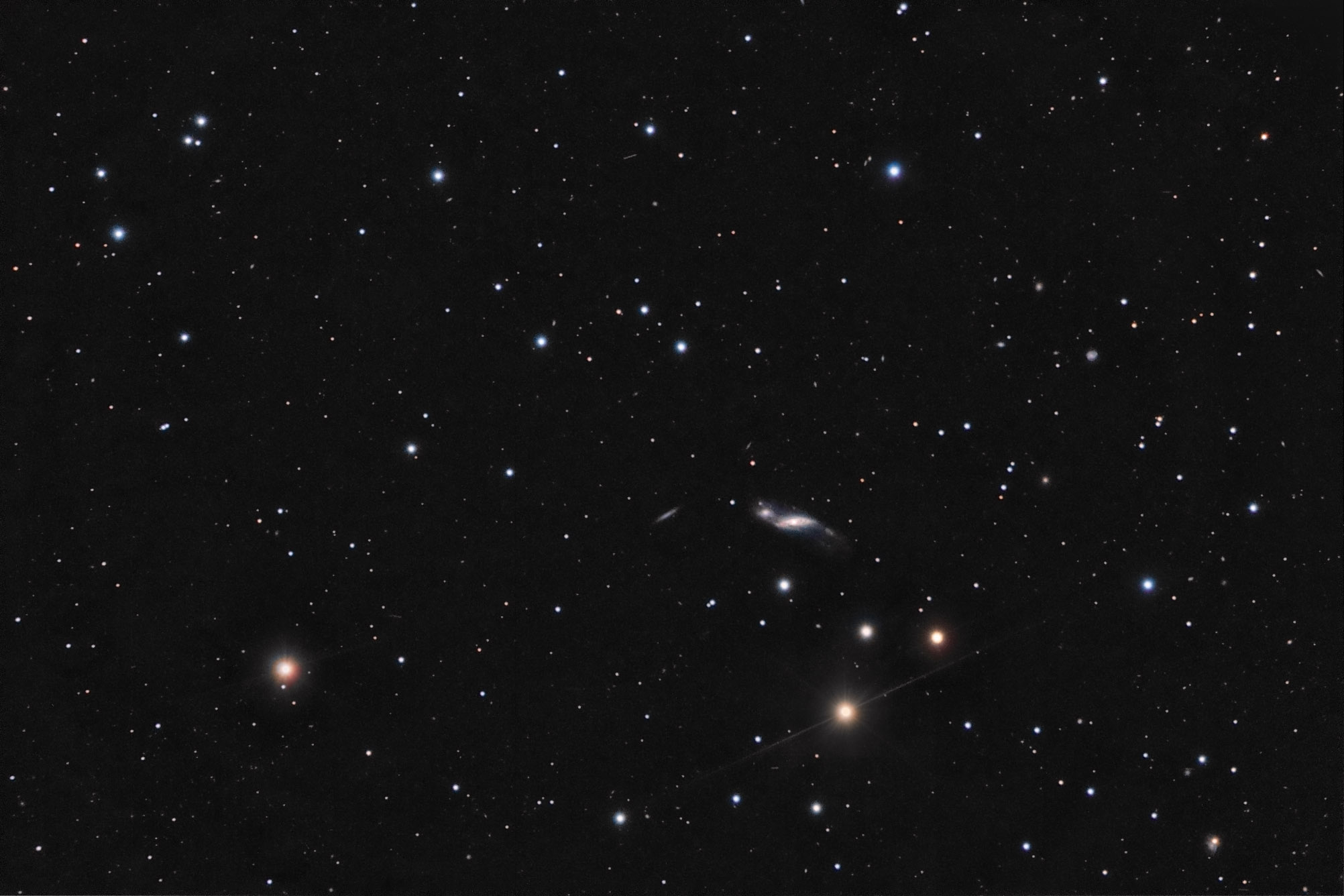