ARP 288 is a triple galaxy system in the very northeast corner of Virgo about 320 million light-years away. Arp put it in his catalog under Wind Effects. Apparently referring to the northern member of the trio, NGC 5221. It has some faint but huge plumes. South of it is the odd galaxy pair of NGC 5222. It consists of a small blue spiral and a larger golden elliptical galaxy. Arp\'s comment refers to NGC 5221 when it says: \"Streamers in both directions from edge of spiral\". Why he included the pair that is NGC 5222 I\'m not sure. They are related in that their redshift is about the same but neither shows distortion that could easily explain NGC 5221\'s plumes.

NED classes NGC 5221 as Sb. I\'d have thought the plumes would earn it a pec designation but apparently not. The spiral itself is quite ordinary looking though I suspect that is due to our highly tilted viewing angle. One note at NED says it is a barred spiral.

NGC 5222 is an odd pair of galaxies, a small blue Sa spiral and a far larger elliptical (E). The spiral has some distortion, best seen on the Sloan or Arp images. Redshift puts them about 3 million light years further away though this is likely due to their motion about a common center of gravity rather than a real difference. Still, these two have virtually the same redshift indicating a closer relationship. The papers I found consider the elliptical as the cause of NGC 5221\'s plumes. I\'m not so sure. The distortion to the much smaller and likely nearer blue companion is not nearly as great yet such a tiny galaxy should be greatly distorted. Though if the interaction is just starting this would be the case. Still, I\'m not convinced.

The other large galaxy in the image is NGC 5230, an M101 like spiral. It has a redshift distance of 324 million light years. One note at NED says it might be distorted by the elliptical NGC 5222. Again I\'m having problems with this. Shouldn\'t the elliptical show some distortion after interacting with two large and one small galaxy? I can understand the small one but not the other two. Would it be more likely that NGC 5221\'s plumes are due to it interacting with NGC 5230 in the distant past? Seems more likely to me. Nothing I found in the literature suggests it, however. Both were discovered by William Herschel on April 12, 1784 but aren\'t in either Herschel 400 observing program.

There are quite a few other galaxies in the group in my image. The largest after these three is NGC 5226, the small spiral north of NGC 5221. At a redshift distance of 346 million light-years, it could be a distant member though again this might be due to its motion relative the rest rather than a true distance difference.

All possible members with redshift data are shown by name in the annotated image. Those without a catalog designation are too distant to be considered possible members of the Arp 288 group. 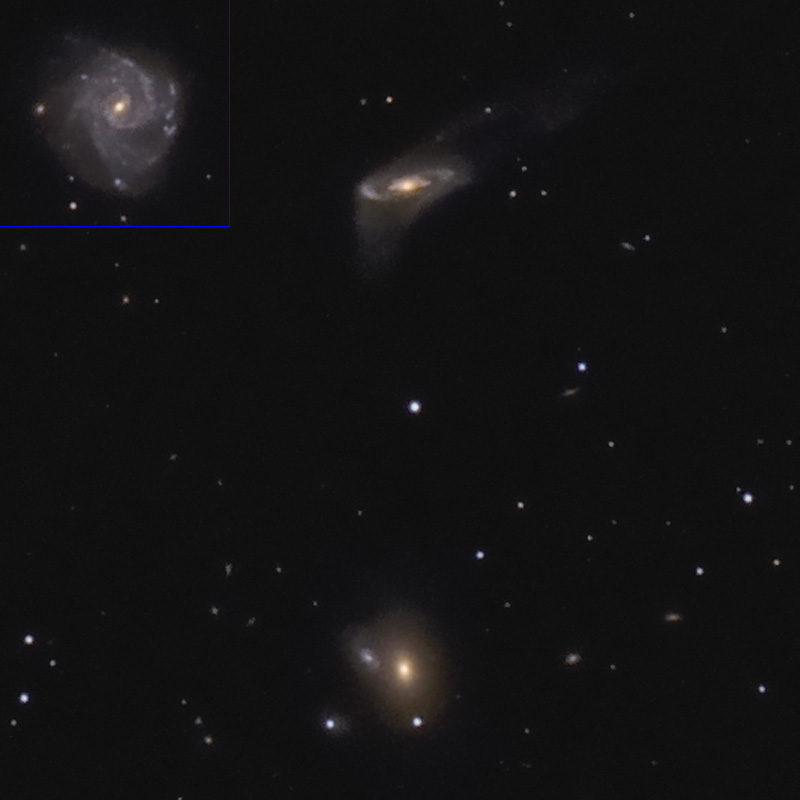 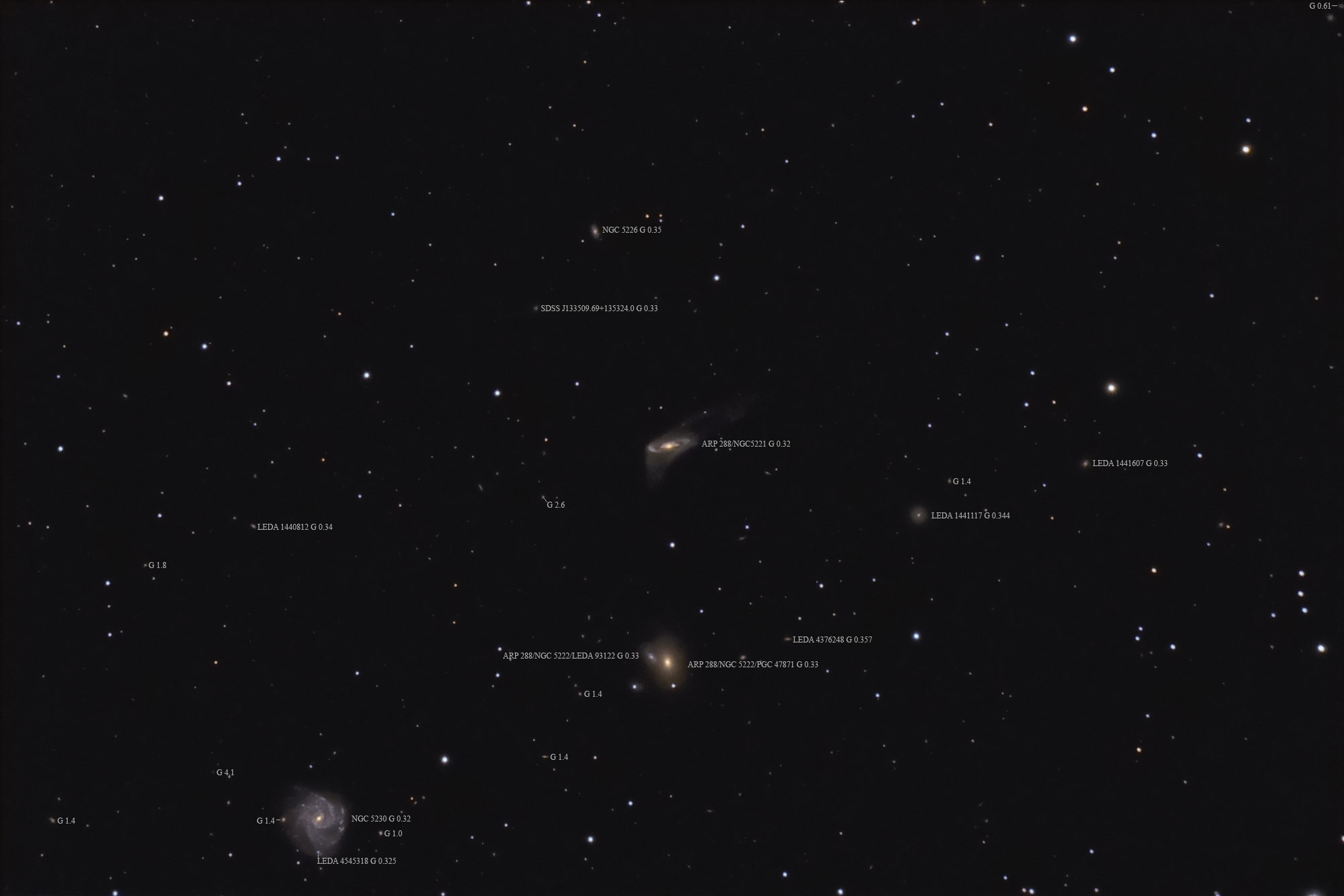 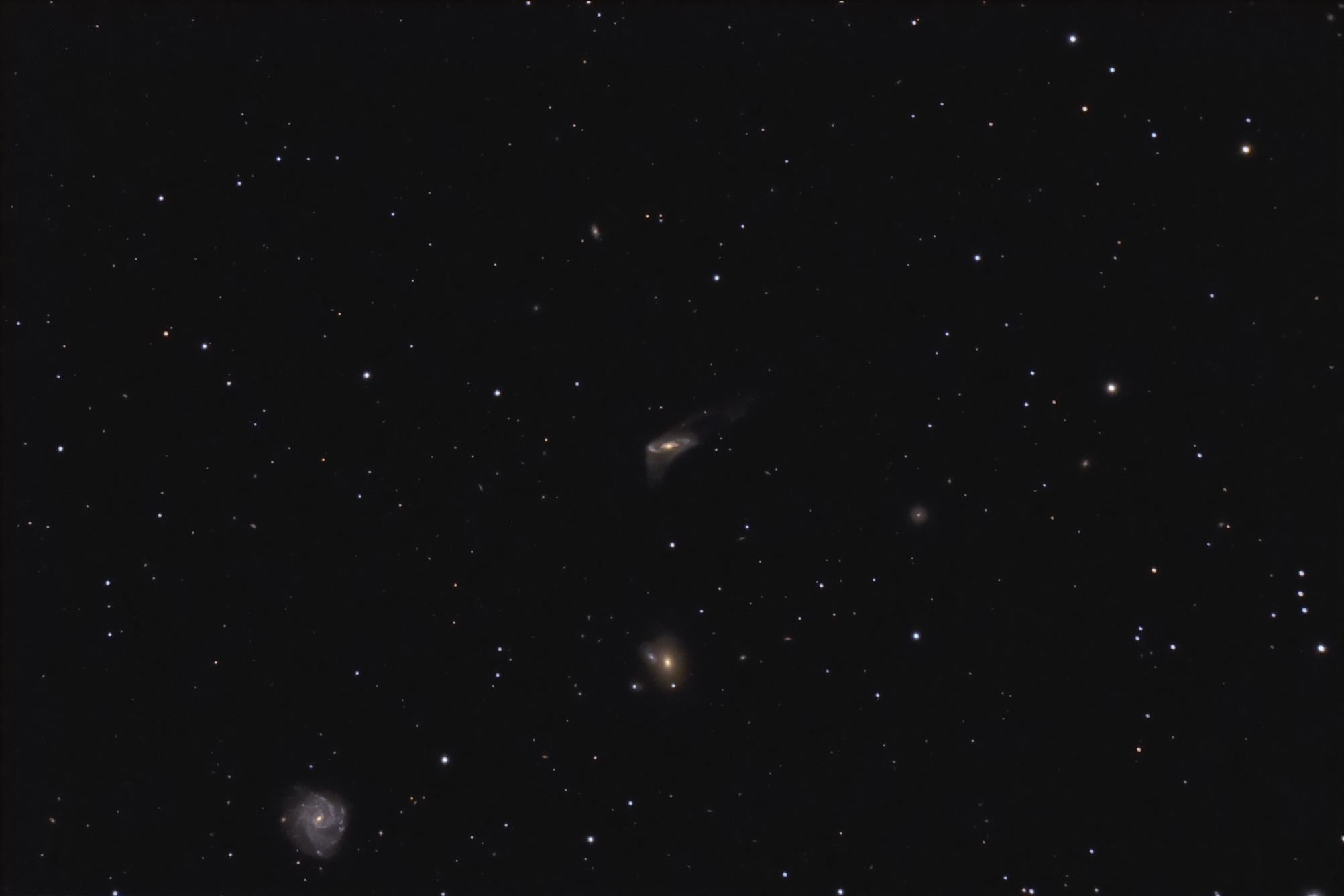