ARP 289/NGC 3981 is a spiral galaxy in far eastern Crater just barely in Crater rather than Corvus. At almost 20 degrees south it is the most southern Arp galaxy I\'ve been able to image. Its distance is put at about 100 million light-years by redshift and about 75 million by other methods, mostly Tully-Fisher. Arp put it in his category of Double Galaxies with wind effects. His comment reads: \"Very faint diffuse streamers.\" NED classes it as SAB(s)bc pec.

The problem is that most sources don\'t see the second galaxy. Of the notes at NED only a very old one (1968) about the time of Arp\'s Atlas speaks of it being an M51 like galaxy. Apparently, Arp and the note are referring to the blue blob at the south end of the brighter part of the galaxy. The Kanipe-Webb book on the Atlas identifies the blue blob as VV8B. VV stands for the Vorontsov-Velyaminov Interacting Galaxies catalog. But NED shows VV8B as Part of Galaxy, not a separate one. Most today seem to consider the object a massive star forming region in the galaxy rather than a separate galaxy. So what distorted it? Like Arp 184/NGC 1961 some say the distortion is just the way this one was made. Even if true how do you explain it was \"made\" so differently? Hubble hasn\'t taken but one very underexposed and useless image showing nothing I can recognize so no help there. Kanipe-Webb just leaves the issue of one or two galaxies here as open to debate. The galaxy was discovered by William Herschel on February 3, 1788 but isn\'t in either of the H400 observing programs.

I can\'t buy those plumes being just the way this galaxy is. I think it merged with something and the blue blob something left over from the merger which created the huge plumes. I\'d love to see some rotational studies of it but couldn\'t find anything on this.

Modern paper (1994 -- latest at NED) read:
\"The two well-defined principal arms of the grand design type in NGC 3981 have high surface brightness. They can be traced for about half a revolution outward from their origin near the center until they abruptly decrease in surface brightness, become more open, and exhibit a smooth appearance. It is the plume-like appearance of the very faint outer \"arms\" that gives the notation (tides?) in the classification, although no companion is present. The designation simply describes the morphology, not the cause, which probably is not interaction via an encounter but rather is endemic to the galaxy. The heavy main print shows faint HII regions in the outer extensions of the inner arms and in a separate outer arm not connected with the two main inner arms. This third faint outer arm can be faintly seen as a straight segment along the major axis (at the top of the facing print) which then sweeps at a large pitch angle to the right in the orientation of the image here.\"

1968 paper says:
\"Third, after M 51 and NGC 7752-3, classical example of interacting galaxies, the bridges to one of them being the spiral arms of the other, caught by a companion. It is now well-established that M 51 is not unique of its kind, but in its time was an important proof of the generality of the composition and origin of spiral arms and bridges between galaxies. Type: vB - Sbt, Morg - fS6. Photo: VV Atlas No. 8; Arp No. 289. Companion here of type Irr?.\"

Being so far south my image is rather poor. If seeing would hold this low for several nights I could take a pure RGB image which would be much clearer as I could remove the prism effect that so elongates the stars in my luminance channel. Even RegiStar had trouble aligning the color channels. I probably should have run them through a second time as there\'s still some nasty prism colors in the corners. Most of which I removed by brute force processing, that is, clone it out. This prism distortion greatly reduced my resolution. Most nights I can\'t go this low at all so I\'m just happy I could get this result. Due to atmospheric absorption this low a lot of light was lost. Even with 60 minutes rather than my normal 40, I couldn\'t go nearly as deep as normal. Still, I went nearly as deep as most images on the web taken by more southerly located telescopes.

The galaxy is out of the Sloan survey field so there\'s a dearth of information on the other galaxies in the field.

The bright oval red galaxy in the upper left corner is MCG -03-31-003, a SAB0 galaxy with a redshift virtually the same as Arp 289. It is likely a member of the same group as Arp 289. I see no distortion to it so it likely has nothing to do with the distortion of Arp 289, just an innocent bystander. Just below at the 5:30 position is a very tiny, likely dwarf galaxy, [MPP88] 1154-1935. It has a very small redshift putting it possibly much closer, say 20 million-light years away. If true it is a very tiny galaxy. I have some trouble with this. It likely is further away than its pure redshift indicates. MPP is the Monk Penston Pettini galaxy catalog. I don\'t know what characteristic it is using for deciding what galaxies to include. No other catalog lists this galaxy that NED has in its database.

The \"large\" spiral galaxy half-way down the left edge of my image is ESO 572- G 024. It is classed as SBd?. Its redshift is also about the same as Arp 289. Likely another member of its group but again looks quite undisturbed. A couple more likely members of the group are out of the top of my frame. For some reason, I thought they were lower so moved the galaxy up. Think I was looking at the declination and assuming it was positive rather than negative. I\'ve done that before. So I missed them. Just more smudges so not much missed. The only other \"interesting\" galaxy in the image is the smudge of a galaxy toward the right center of the image. It is ESO 572- G 016. Nothing much is known about it. The rest of the galaxies in the image carry unusual catalog names and no red-shift distance if they are listed at all, most aren\'t.

Arp\'s image oriented the same as mine for a change:
http://ned.ipac.caltech.edu/level5/Arp/Figures/big_arp289.jpeg 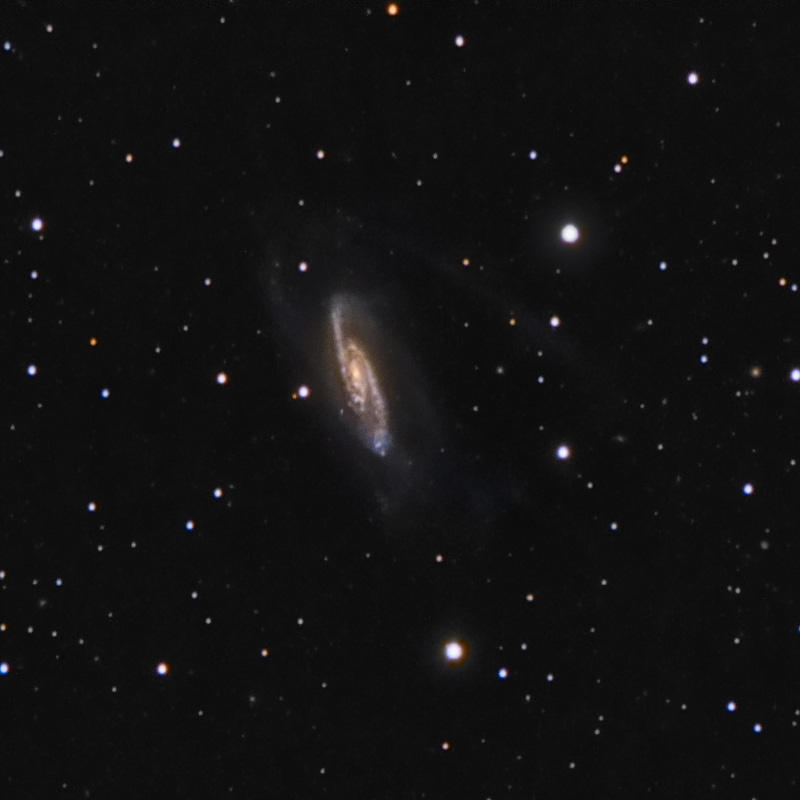 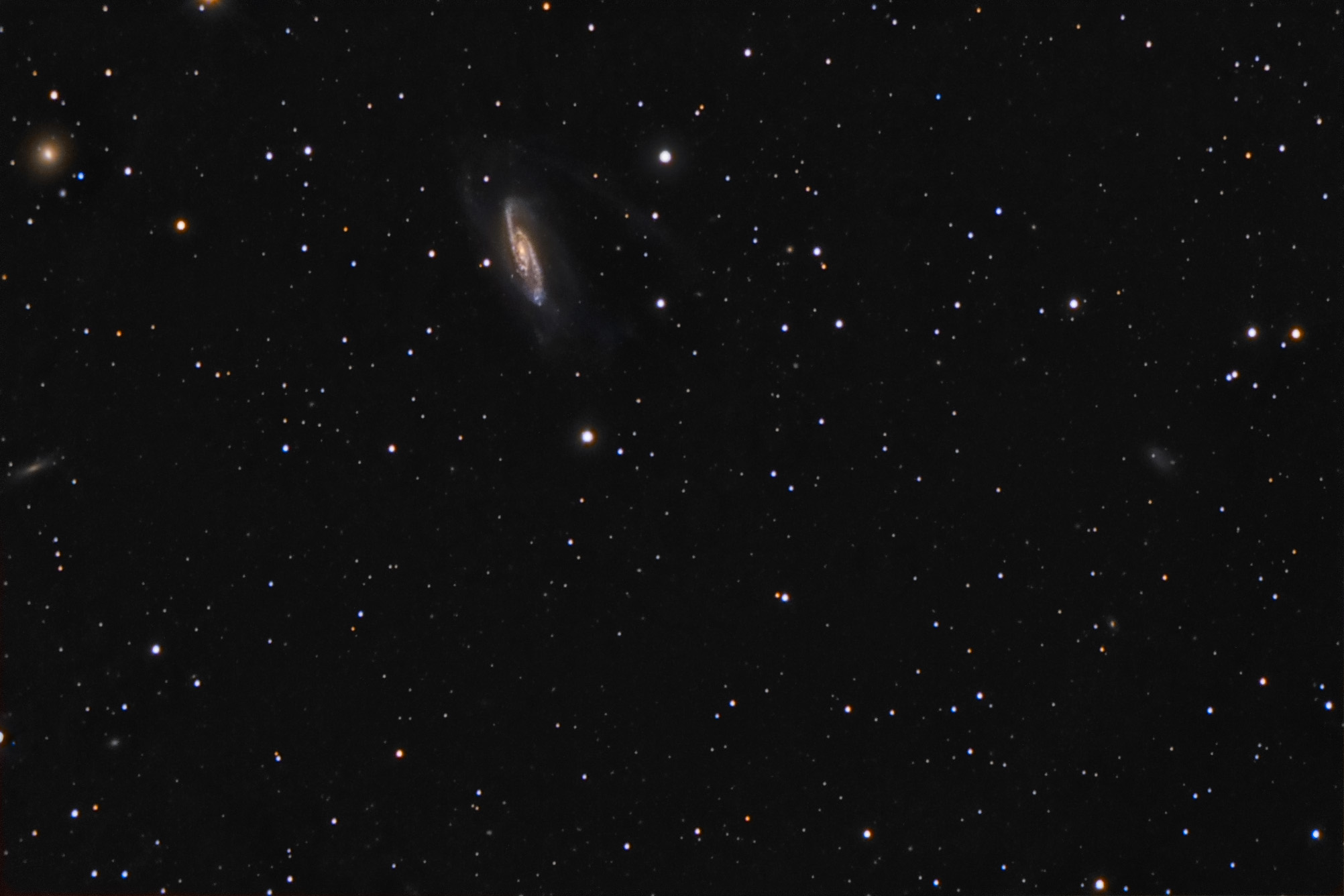