ARP 302 is a pair of interacting galaxies known as UGC9618 located 460 million light-years away in the constellation of Bootes. Arp put it in his class: Group Character: Double Galaxies. Apparently, he missed the tidal star clouds around especially the northern member.

The southern galaxy is a Sc blue spiral. It shows some rather strong HII emission but isn\'t considered a starburst galaxy as it lacks the needed IR light. The northern member, however, is quite different. It is a red spiral classed at NED as Sb and is a LINER galaxy indicating its core is very active. It is classed as a starburst galaxy and does have strong IR emission showing active star formation. This is odd. Normally red spirals are considered dead spirals. Ones in which star formation has ceased so they are dying as all the new blue stars are long burned out leaving only yellow and red stars giving it a reddish hue. But here we have massive stars being formed though this is hidden to us by warm dust we see as IR light. I do note the very ends of its arms are blue. Usually, in a starburst galaxy, the majority of the star formation is in the core. These spirals are often barred spirals but this apparently isn\'t one of them.

While this field is covered by the Sloan survey NED shows no distances for any galaxies in the field beside the two making up Arp 302. Below Arp 302 is a tight trio of galaxies almost in a line. The two on the left look like one on the POSS plates but are separated by a narrow dark band in my image as well as the Sloan image. The right object is much bluer than the left but far smaller in angular size. Looks like a piece broken off the left piece but the color difference makes it obvious they are separate objects. I have no distance data so can\'t tell if they are really close together or not but at least NED does list them. The third member of the group just to their right isn\'t listed at NED but the faint 23rd magnitude galaxy beside it at the one o\'clock position is. There are many interesting galaxies but about all I have on them is a magnitude estimate and their coordinates. Thus I didn\'t bother to prepare an annotated version.

I\'d like to know more about the edge on spiral near the right edge of the image at the same level as Arp 302. It too is a red spiral and seems to have blue stars at the very ends of its arms. Coincidence? Or is it related to Arp 302 and had a run in with it in the distant past causing these blue ends? Wish I knew. There\'s just nothing much on these galaxies unfortunately Even Arp made no comment about them.

Normally I image at 1\" per pixel binning the image 2x2. But this night seeing was far better than normal so I went to 0.5\" per pixel by not binning. To keep the image size within reason for the internet I only downloaded the center one quarter of the image by area. When seeing permits I often enlarge the image to 0.67\" per pixel. No need here as it already is at 0.5\" per pixel. Still, the stars are very tight. Many only 1.2\" to 1.4\" FWHM. This is likely my highest resolution Arp image to date, slightly better than Arp 149 taken the previous night. But like the previous night, the good seeing didn\'t last. I\'d hoped to take 12 L images but after only 7 seeing went very bad. So bad in fact I had to shut down. Color data was taken binned 2x2 the following night. I\'d hoped I\'d be able to get more L data that night but seeing was 2.5\" (about normal) and far from what I needed to go to the 0.5\" pixel. I never did get more luminance data. So the image is noisier than I\'d like but the detail makes it worth it.

See Arp 177 for later and better images of this one. 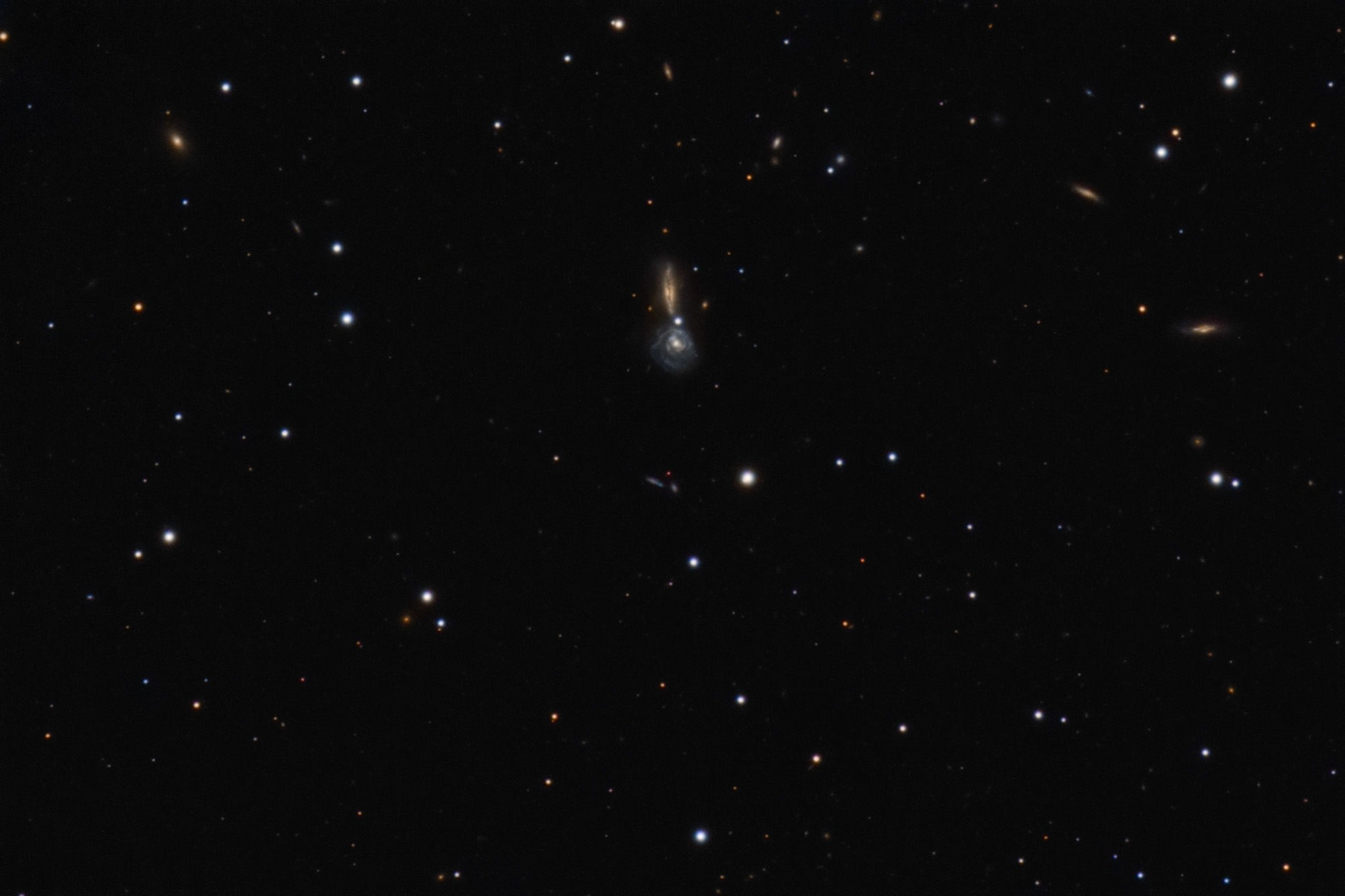