ARP 310 and 311 is an odd combination in Arp\'s catalog. Arp 310 consists of IC 1259, a close pair of galaxies. Arp 311 consists of Arp 310 and adds IC 1258 to its southwest and IC 1260 to its southeast. Arp 310 is classed under Group Character: Galaxy pairs while 311 is under Group Character: Galaxy Groups. There are other galaxies in the area but as far as I can determine they aren\'t included in 311 by Arp. Arp 311 is also known as WBL 640 and is listed by NED as consisting of only 4 galaxies. But the SDSS lists a cluster centered on Arp 310 called SDSS-C4-DR3 3143 consisting of 47 members. It puts the average redshift for the group at 8394 km/s while that of Arp 310 is a bit less at 8100 km/s. The difference is insignificant as relative motion within a cluster can easily exceed this difference. So apparently the group is much larger than Arp realized. Using this latter redshift the distance to Arp 310-311 would be about 375 million light-years. Arp\'s comment on Arp 310 was simple that it consisted of two close elliptical galaxies. He had nothing to say about Arp 311. These galaxies are located near the head of Draco, just east of the Draco Dwarf Galaxy, a satellite galaxy of our Milky Way Galaxy that is one of the dimmest galaxies known consisting mostly of \"dark matter\" and a handful of stars.

Arp 310\'s two galaxies are classed as S? (right) and S0 pec (left) by NED. This disagrees with Arp\'s elliptical statement but does agree with my image that shows them as having a somewhat bluer cores than the outer halo. Most ellipticals have a far redder core than these do. IC 1258 is classed by NED as Sab? I\'d put a pec on that. It does appear to have somewhat blue arms but this is an illusion. Looking at the three color planes red is slightly stronger than blue yet it appears blue to my eye when compared to the red of the nearby galaxies and its own core. My image seems to show a bridge of red stars between the two galaxies. As best as I can tell Arp usually used a blue sensitive film with a yellow filter to take most of his images. This won\'t pick up a bridge of red stars very well but I think I see a hint of it in his image when shrunk down. Odd he never commented on it.

There\'s a lot going on in the image. I\'ve prepared an annotated image. Galaxies in the SDSS-C4-DR3 3142 cluster beside those of Arp 310 are listed by name with no distance while those far beyond the cluster are listed by distance. Quasars are also listed by distance. One is very near Arp 310. Something Arp considered meaningful rather than a coincidence nearly all other astronomers agree it is.

In the annotated image note the two very close quasars in the lower right corner, both of which have virtually the same redshift showing a distance of 8.7 light-years. The redshift of the one on the left is z=1.269000 while the left is z=1.269040. I find nothing to indicate they are the product of gravitational lensing. Their colors are not the same, the left one has far more blue in it. Two quasars this close, 7 seconds of arc, is rather unusual I\'d think. I\'m only guessing here. 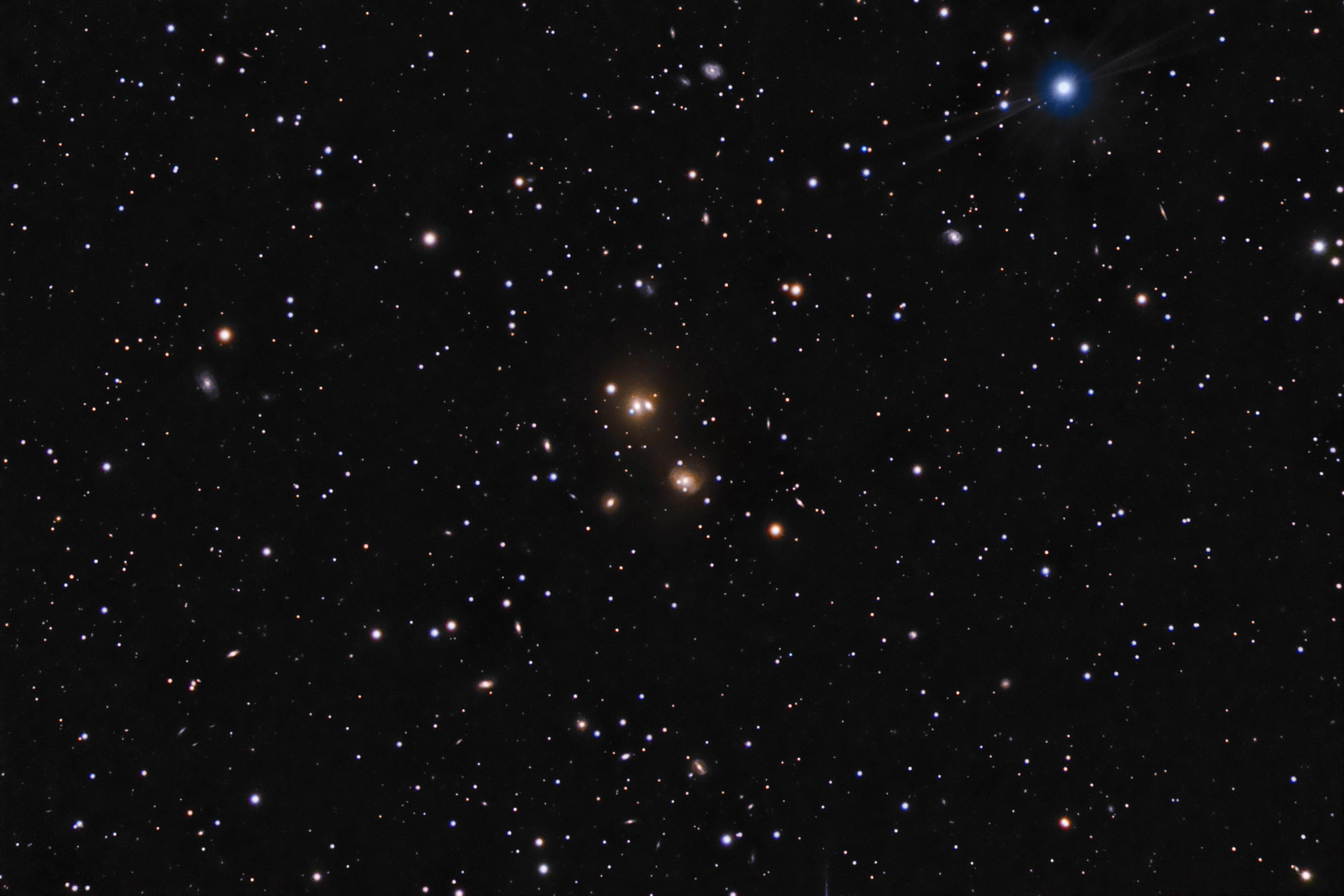 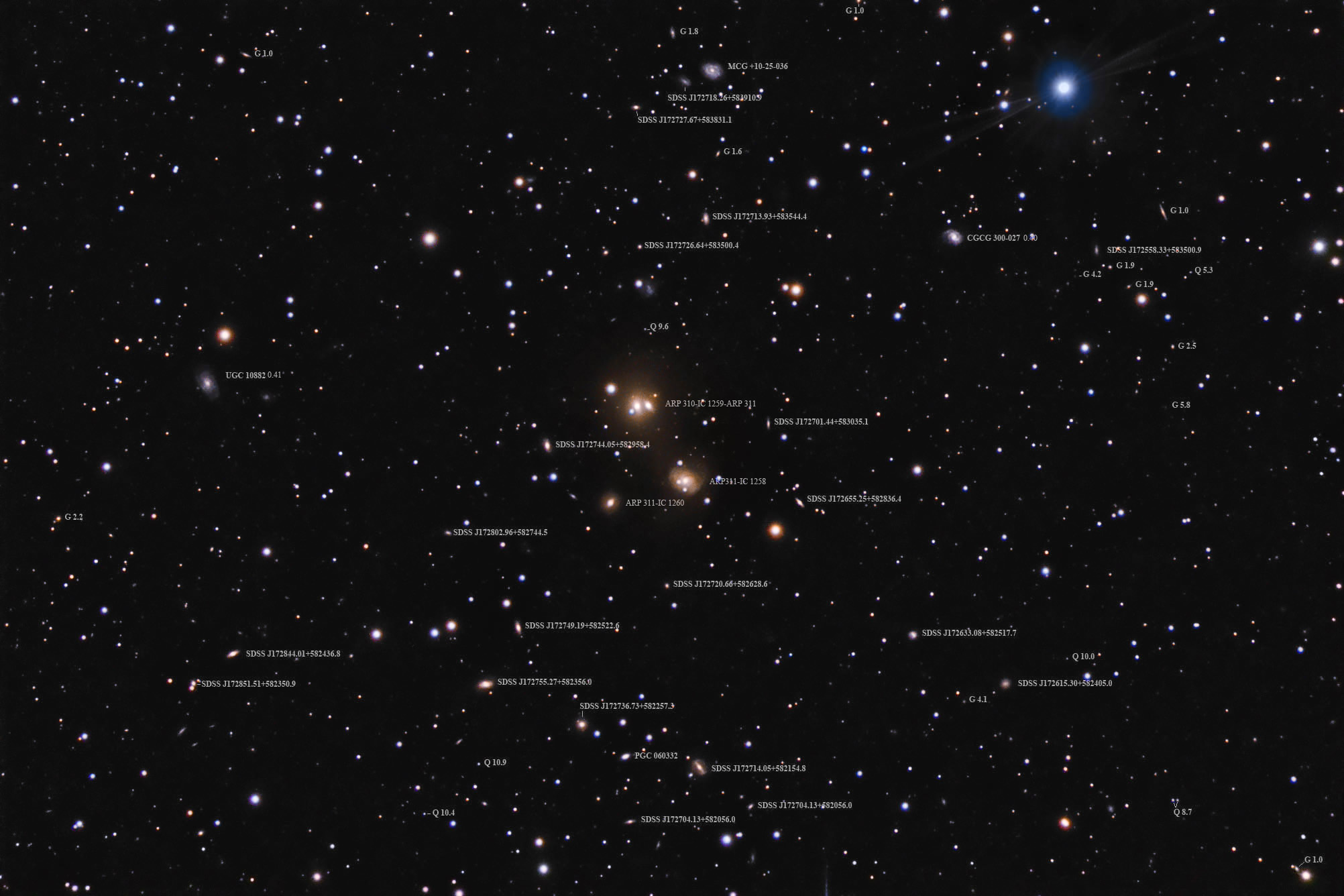