I was going through all my Arp images trying to get them organized. I found some of my very early ones, back when I was just taking interesting galaxies and paying no attention to the Arp catalog, were very poorly processed. This one is one of them. Arp 316 consists of 3 galaxies NGC 3187, NGC 3190 and NGC 3193 and is located between two stars of the sickle of Leo. NGC 3185 is part of the Hickson 44 group but apparently not part of Arp 316. Arp classifies it under \"Group Character: Groups of galaxies. A redundant classification. Reminds me of when I was in college working for an accounting firm. Bookkeeping was done by IBM punch cards on a mechanical rather than computer system. The firm with the equipment forced all users to the same expense categories. There were 9 possible classifications in three levels defined by the numbers 1-9. Each refined the previous category. 9 was Other, 9 under that was Miscellaneous and 9 under that was Misc. I was told that I could never use account 999 for obvious reasons. So they did Arp one better with redundant classes.

The main galaxies of the group include NGC 3185 at the bottom (not part of Arp 316). It is classed as SB(r)a and is thought to be about 70 million light-years away.

NGC 3187 is the wide armed spiral, SBc pec, and is thought to be about 85 million light-years away. Note how the upper arm has lots of fine detail but the bottom one looks all \"windswept\" and fuzzy. Must have happened in the tidal interaction that gave it such wide spread arms in the first place though I can\'t recall seeing this effect before. Notes indicate it is interacting with NGC 3190 and maybe NGC 3185.

The big spiral in the center with the very weird dust lanes is NGC 3189 (lower part) and NGC 3190, rest of it. Most sources just use the NGC 3190 designation, however. It is classed as Sa pec LINER and is thought to be 73 million light-years away. Note the two planes to its dust lanes. There\'s the main lane which at the NW end suddenly seems to separate and go off at a different angle for a short ways. Then toward the other end, it splits with a fine lane resuming about the same plane as the odd piece at the other end. But they don\'t point at each other, just that they seem to be at about the same angle in relation to the main band. Very odd. Lots of tidal spray around the galaxy as well. This may be the result of a merger that hasn\'t yet been pulled into one plane.

This group is also known as Hickson 44. NGC 3185 and 3187 were discovered by George Stoney in January 1850. Sorry I couldn\'t find a more precise date. The other two NGC 3190 and 3193 were discovered by William Herschel on March 12, 1784. I find it odd he didn\'t find the first two as they are seen in my 10\" f/5 scope though 3187 is more difficult than the other three. Both of Herschel\'s galaxies are in the original H400 program. My notes from April 15, 1985 under humid but fair skies at up to 150x reads: \"3190: Oval galaxy, gradually brighter toward the center. This galaxy is not a winner except when you take the other three into account. Does form a nice high power pair with NGC 3193. 3193: Small, not quite circular galaxy near a field star. Forms a high power pair with 3190. It has a large bright core with a tight halo about it.\" It appears this group is photographically much better than seen visually, at least through the humidity I was dealing with that night.

The blue spiral toward the SE corner is LSBC D500-05 an Sc spiral, LSBC stands for Low Surface Brightness Catalog. The galaxy is listed with a redshift that puts it about 200 million light-years away. Thus it must be a rather large galaxy.

Most of the other blue fuzzies aren\'t even listed in NED which surprises me as this is an area covered by the SDSS yet they aren\'t in it either.

ARP 316 as a whole is listed by NED at a distance of 78 million light years by redshift.

This was taken on a night of better than normal seeing. So I was able to get a lot of detail in these galaxies. But what really strikes me about the image is that the spread of faint objects is very uneven. There\'s an area around the 3 upper galaxies and one bright star that has a lot of faint objects in it. But the rest of the image has far less. You normally don\'t think of dust in Leo but it seems like something could be reducing the background except in that one area. It appears most of the objects in this \"enhanced\" area are galaxies. I searched NED for some galaxy clusters in the area and came up with two but they are centered near NGC 3187 or a bit above it. Still, they show a distance of over 2 billion light years which does seem to fit. They are NSC J101747+215255 and 400d J1018+2154. They are likely seeing the same group. There\'s not much data on either as to size density or galaxy count.

Arp\'s image of the group taken this time with the 48\" Schmidt telescope due to the area being too great for the 200\" field of view, is at:
http://ned.ipac.caltech.edu/level5/Arp/Figures/big_arp316.jpeg 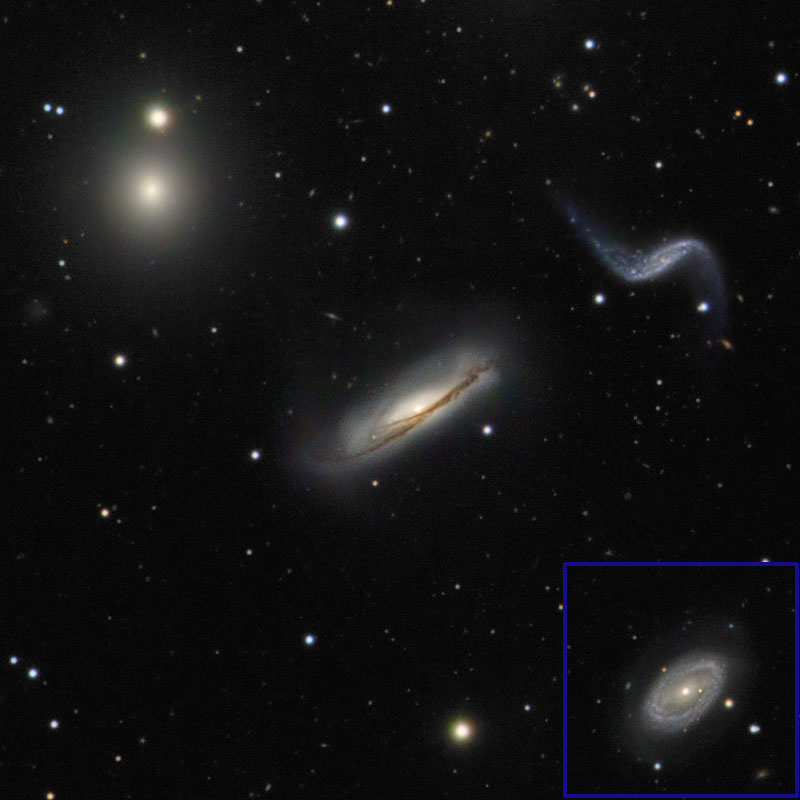 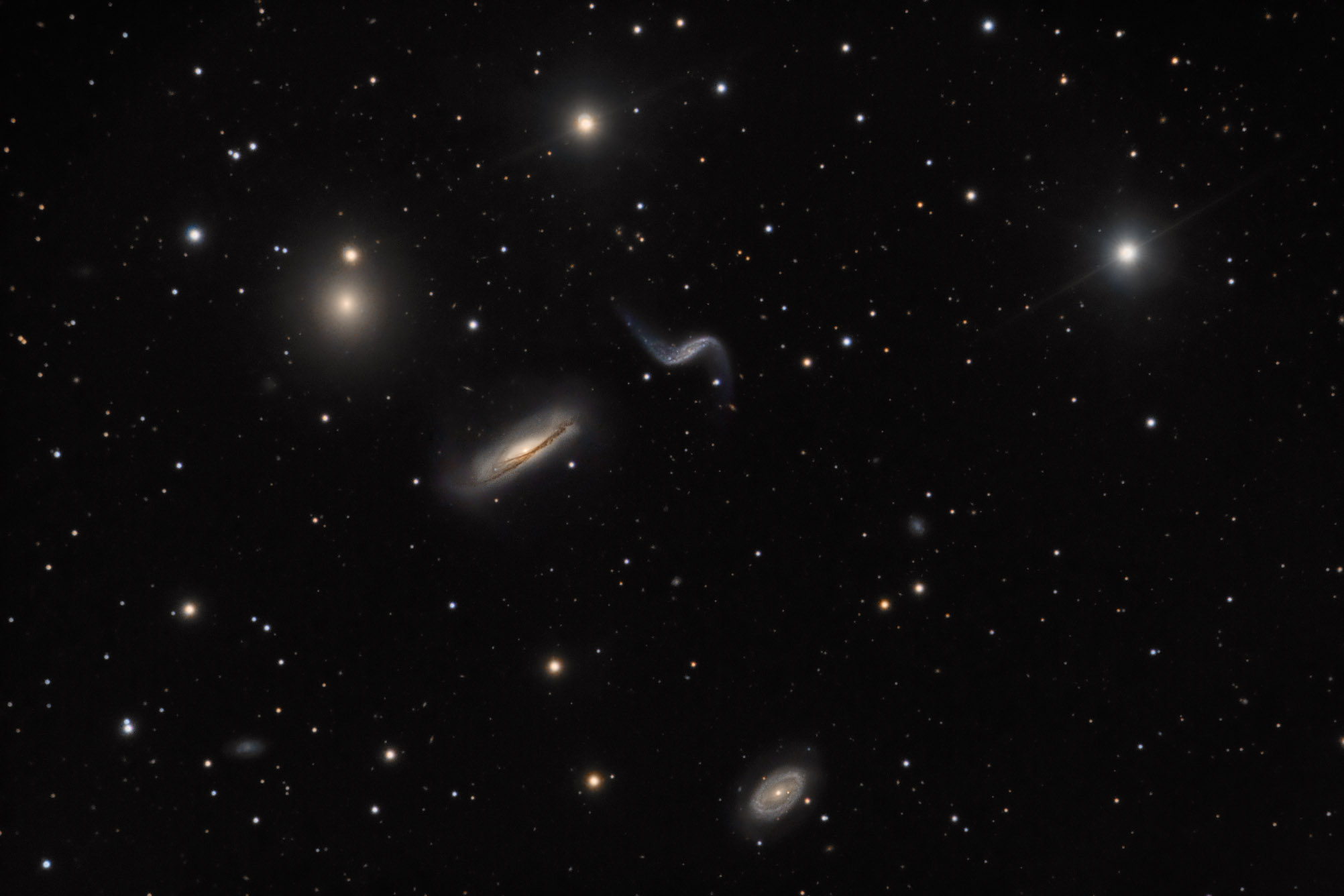