Arp 319 is better known as Stephan\'s Quintet. It is really a group of 4 galaxies with a 5th galaxy in the foreground though there is a true fifth member Arp didn\'t include it. The interloper galaxy is NGC 7320. It is apparently the largest of the group and the bluest. It is really a member of the so-called \"Deer Lick\" group located less than a degree away. It is located only some 40 million light-years away while the other 4 are about 270 million light-years from us. At one time this group was put forth by some to disprove redshift as a distance measure to the universe. Since NGC 7320 is close it has a small redshift while the other 4 have a large redshift. But if all were at the same distance then redshift was called into question. It took Hubble to answer this for sure. It could resolve stars in NGC 7320 but only massive star clusters in the others. This was consistent with the redshift distances and it is now accepted that 7320 is a Deer Lick member seen in front of the far more distant group. Actually, we do have 5 members of this distant group. To the left, a bit is a barred spiral whose arms make a nice ring, NGC 7320C. It is now known to be a member of the group and may be responsible for some of the tidal plumes. So there really are 5 galaxies in Stephan\'s quintet, just that one isn\'t the one we thought was a member for many years.

For a shot taken with a far larger telescope on Kitt Peak than mine see: http://www.noao.edu/image_gallery/html/im0414.html

Actually, there are several more members of the group. Just that like 7320 is well away from its group these other members aren\'t as close by. One is LEDA 141041 even further east than the first 5. Then there\'s the very awkwardly named [WYV2002] 6 in the upper left corner of the image. Just out of the image due east of the cluster is NGC 7320B yet another member of the group. These are the only ones I found with redshift values to show they are very likely group members. In the lower part of the image is NGC 7320A which looks almost a twin of NGC 7320B I missed catching. Both these last two are members of the 2MASS flat galaxy catalog. On the west side of the image is the S0 looking galaxy PGC 69218. It too has no redshift data but could possibly be a member of the group.

I find it interesting that while NGC 7320 is now known not to be a member NGC 7320B and NGC 7320C are members (as may be 7320A). The annotated image identifies the galaxies that have redshifts and those two without redshift data that might be members of the group as well as the interloper, NGC 7320 itself. There\'s one quasar in the image hard to pick out from NGC 7319 appearing more like a bright spot in the galaxy. Also, a star forming knot in the tidal plume coming from NGC 7319 is listed in NED as a separate galaxy though I think it is just a star cloud in the plume, one of several in that plume.

So how did this group come to be so tidally damaged? There are many theories. A note at NED summarizes them this way: \"To explain the peculiar morphology of Stephan\'s Quintet, a number of different interaction scenarios have been suggested. Some of these scenarios involve ram pressure stripping during a head-on collision between two galaxies. For example, Peterson & Shostak (1980) suggest that a head-on collision between NGC 7318B and NGC 7319 removed the gas and caused the radio continuum ridge between them. A different scenario was suggested by Shostak et al. (1984): a prograde tidal encounter of NGC 7320C and NGC 7319 occurred, pulling gas out of these galaxies, creating the long tail south of NGC 7319. This was followed by a high-speed collision between NGC 7318A and NGC 7318B. Other scenarios involve a collision between an \"intruder galaxy\" (usually NGC 7318B) and intragalactic gas that had previously been tidally stripped or ram pressure-stripped in an earlier encounter between two different galaxies in the group (van der Hulst & Rots 1981; Moles et al. 1997). Moles et al. (1997) suggest that a direct collision between the outlying galaxy NGC 7320C and NGC 7319 occurred in the recent past (10^8^ yr ago), removing a large quantity of gas from these galaxies. After this event, NGC 7318B entered the group at high velocity, colliding with this stripped gas and triggering star formation.\" Pick one of your choosing or come up with another. Seems to be still open for more ideas. Look up Arp 7319 at NED and read the notes for even more suggestions from users of the radio part of the spectrum.

What I never saw mentioned is that NGC 7320 seems to have its own plume extending to the southeast (left and some down). Is it from NGC 7320 or is it really from NGC 7318B but mostly hidden by NGC 7320 until it finally appears after passing behind it? I found nothing on this feature. 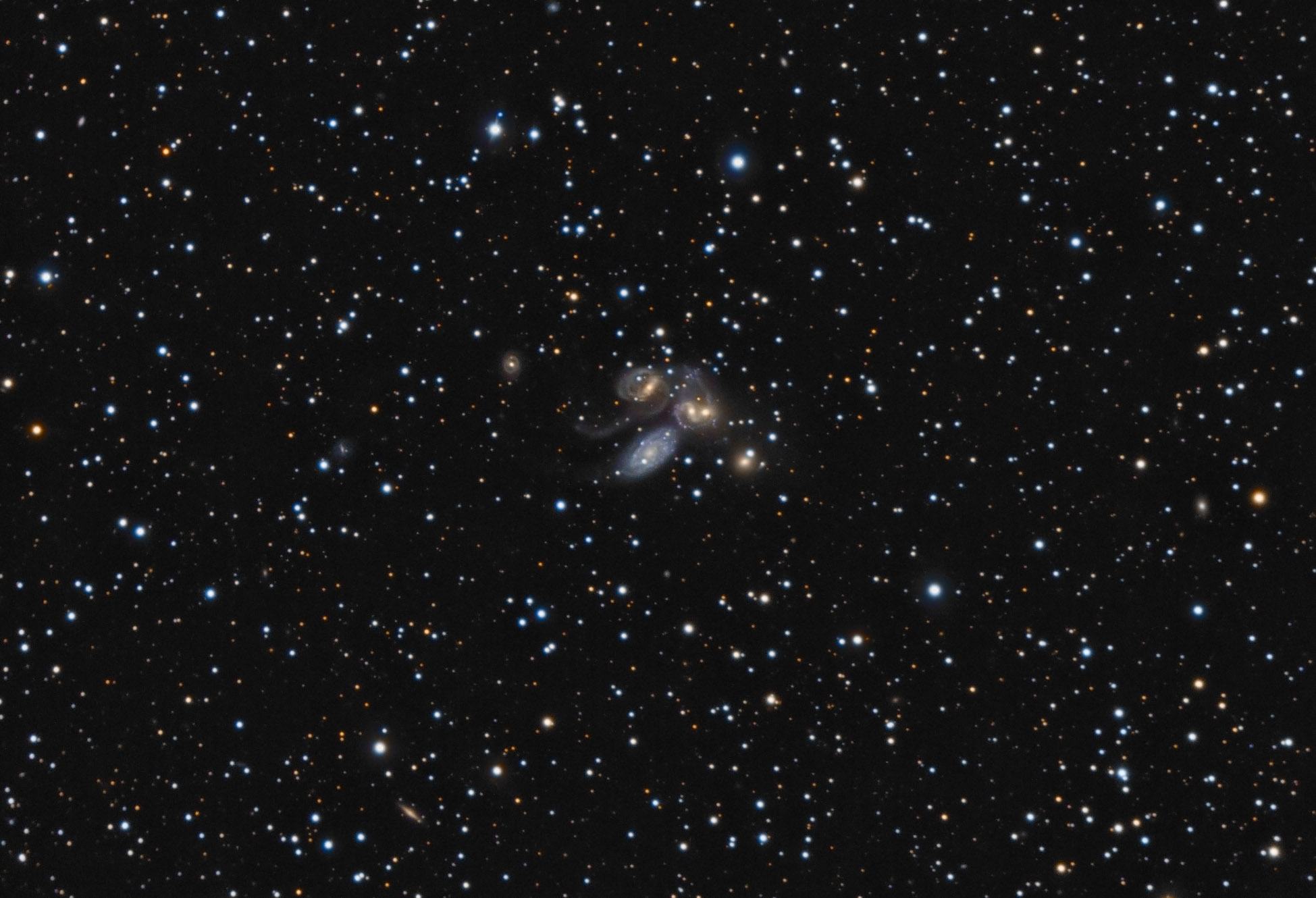 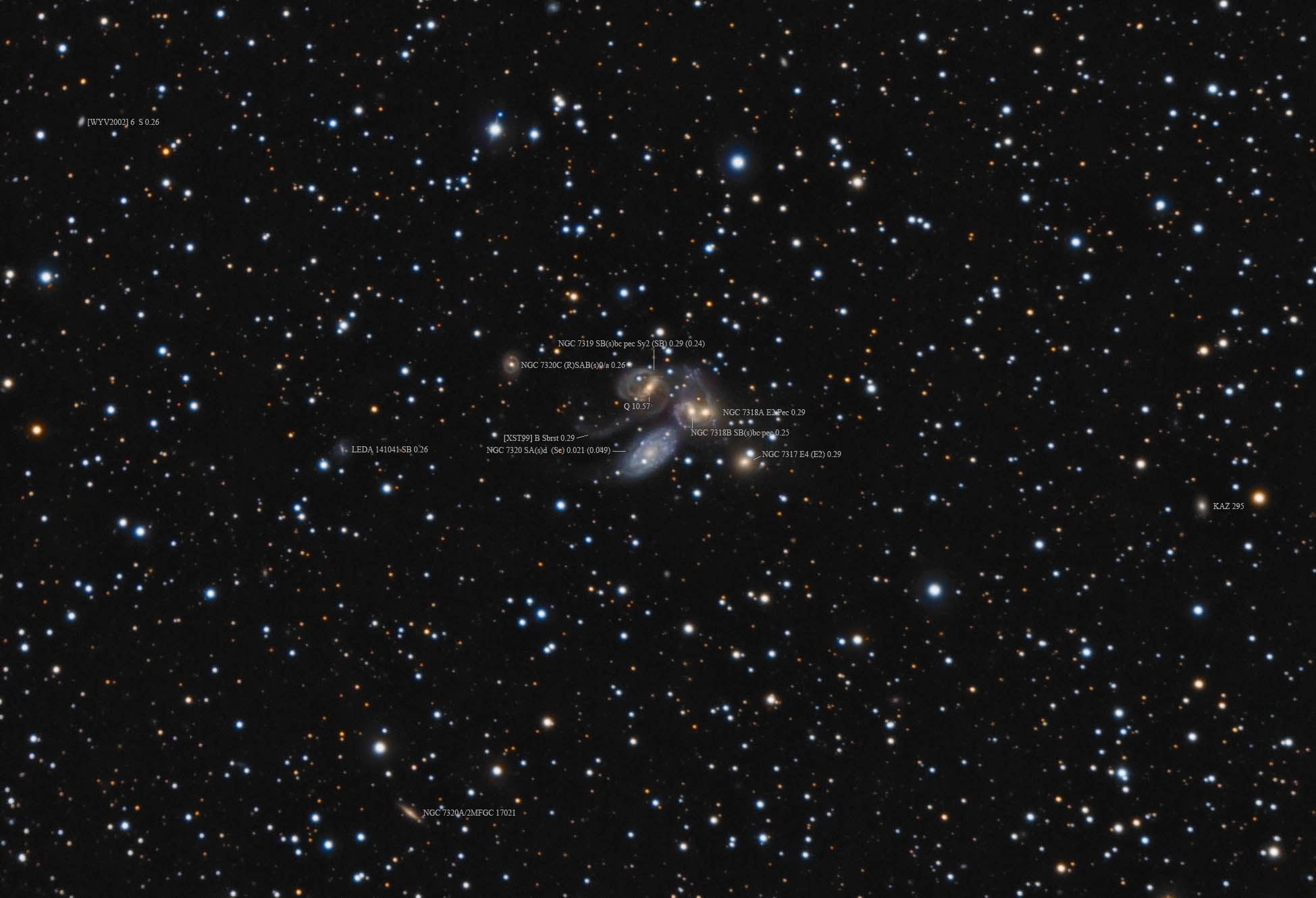 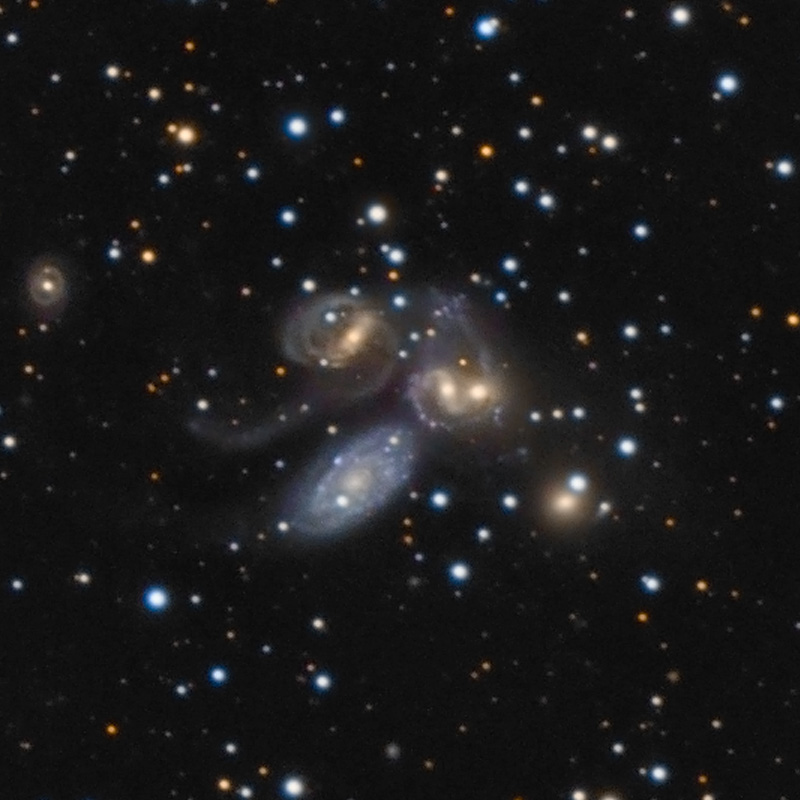