Arp 324 is a chain of galaxies in a western corner of Hercules right on the border with Serpens Caput. It is located in the corner I call the realm of Abell galaxy clusters. As there\'s a line of 3 them with Abell 2147 at the south end. 2152 and 2151 are the other two, 2151 is the famous Hercules Galaxy Cluster. In fact, Arp 324 is almost at the center of 2147 cluster which is about 475 million light years distant. Arp put Arp 324 in his Group character: Chain of galaxies category. How many he saw in the chain I don\'t know. Some sources say 6 some 9. Arp\'s comment on the group: \"Diffuse elongation of E\'s along line joining them.\" I think he is referring to the two main ellipticals which seem to exist in one diffuse, very elongated halo. Whether this is real or a line of sight illusion I don\'t know. I found nothing on this question. In any case, such elongated halos are a pretty good sign that these halos are tidal in nature. Not easy to pull stars from such massive elliptical galaxies so I assume it was these two interacting that caused these tidal features. The northern galaxy is classed as cD:E+ which is a rare type of extremely large elliptical galaxy usually found to be anchoring a galaxy cluster, which is exactly what it is doing. It is known as UGC 10143. The smaller southern one is PGC 056770 or MCG +03-41-051 and is classed simply as an E3 galaxy.

I really doubt this is a true galaxy chain but more a line of sight apparent chain of random galaxies in the cluster. Some of which, like the two big ellipticals and III Zw 075 below are interacting pairs.

Between the two main elliptical galaxies is a \"cute\" ring spiral galaxy with two fine arms coming off the ring. It is UGC 10143 NOTES01 or PGC 056777. It is a puzzle to me. Everyone considers it part of the chain. Here\'s a typical comment on it: \"Compact red object with a faint envelope. This is a component of a chain (connected by a luminous band) of which the compact galaxy III Zw 075 is also a member.\" By red they mean infrared which I don\'t pick up. So it is more blue-white in my image. The problem is its redshift is considerably greater than that of the others putting it about 600 million light-years from us, 125 million further than the Abell Cluster that contains Arp 324. Sometimes a galaxy can pick up high speed due to the gravitational interaction with its cluster neighbors. That may explain it or it may not be a member of the group. I\'m leaning toward the latter. It is quite obviously classed as SAB(r)ab.

III Zw 075 is the pair of elliptical galaxies below the ring spiral that are only 6\" apart. Each has a slightly different redshift. I don\'t know why the note above implied it was a single galaxy. They appear to be a pair of interacting compact dwarf spherical galaxies in the Abell cluster. They seem to exist in a common envelope of stars though this may be an illusion.

At the bottom of the \"chain\" is a flat edge on spiral. It is UGC 10143 NOTES03 or KUG 1559+160. It is nearly impossible to find a catalog that includes all of these. Several include most, however. Like the ring spiral, its redshift is a bit out of line with the Abell cluster. In this case, it is about 75 million light-years closer by its redshift than Abell 2147. Since most cluster galaxies are elliptical I\'m leaning toward this one not being a member as well.

Another spiral like galaxy \"in the chain\" is 2MASX J16021582+1557252. It is between the upper large elliptical and the ring spiral. Its northern arm seems far bigger and brighter than the southern. It might be two superimposed galaxies though NED and SDSS only list the one at in this immediate area. It, like the other spirals, has a redshift that doesn\'t fit the two main ellipticals for Abell 2147. It is about 100 million miles beyond them based on its redshift.

This covers the basic 6 galaxies in the \"chain\". While other sources list more I\'m unable to identify them with any certainty. Some are listed by their MAC entry. The only listing of this catalog I have is accurate only to about 1 minute of arc in Declination and 15\" in RA. Another PGC 56783 is non-existent in all of my sources. As best as I can determine at least two of these are referring to the little interacting trio of galaxies above the two major ellipticals and a bit west. From south to north they are SDSS J160214.00+160111.2, SDSS J160213.92+160127.2 and SDSS J160214.72+160127.5. Redshift data shows the first two are members of the Abell 2147 cluster. I have no data on the third member, it appears to be involved with the halo so probably is also a true member of the cluster.

If you\'ve been following my posts I\'ve been noticing the SDSS often missed very blue galaxies. So the extremely blue galaxy west of Arp 324 caught my eye. It seems an exception because it was picked up by the SDSS as SDSS J160154.20+160016.7 and has a redshift that puts it in the Abell cluster. So not all of these super blue galaxies are not picked up.

Down near the bottom left of center is a very weird galaxy with a redshift of 510 million light-years and thus likely a cluster member. It is right beside a rather bright blue star to its east. It is classed as S0 but seems to have a very odd blue ring around it. NED\'s primary listing for it is GIN 464. Blow up the image to see the ring detail.

Trying to do a typical annotated version of this image is virtually impossible. I\'d have labels on top of labels making a mess and taking me far more time than I have available. So I\'ve just pointed out a few objects, not members of Arp 324 or Abell 2147 that caught my eye. Objects like SDSS J160143.48+155706.3, a quasar at 12 billion light years shining at magnitude 21.3. A question mark indicates a galaxy not in NED that I think should be as far dimmer galaxies are included.

For those who have been asking the limiting magnitude of this image isn\'t as deep as I\'d have liked, humidity cut down transparency. It is about magnitude 22 for tiny compact galaxies, 22.3 for stars and about 21.8 for fuzzy galaxies. All these are measured in green light. 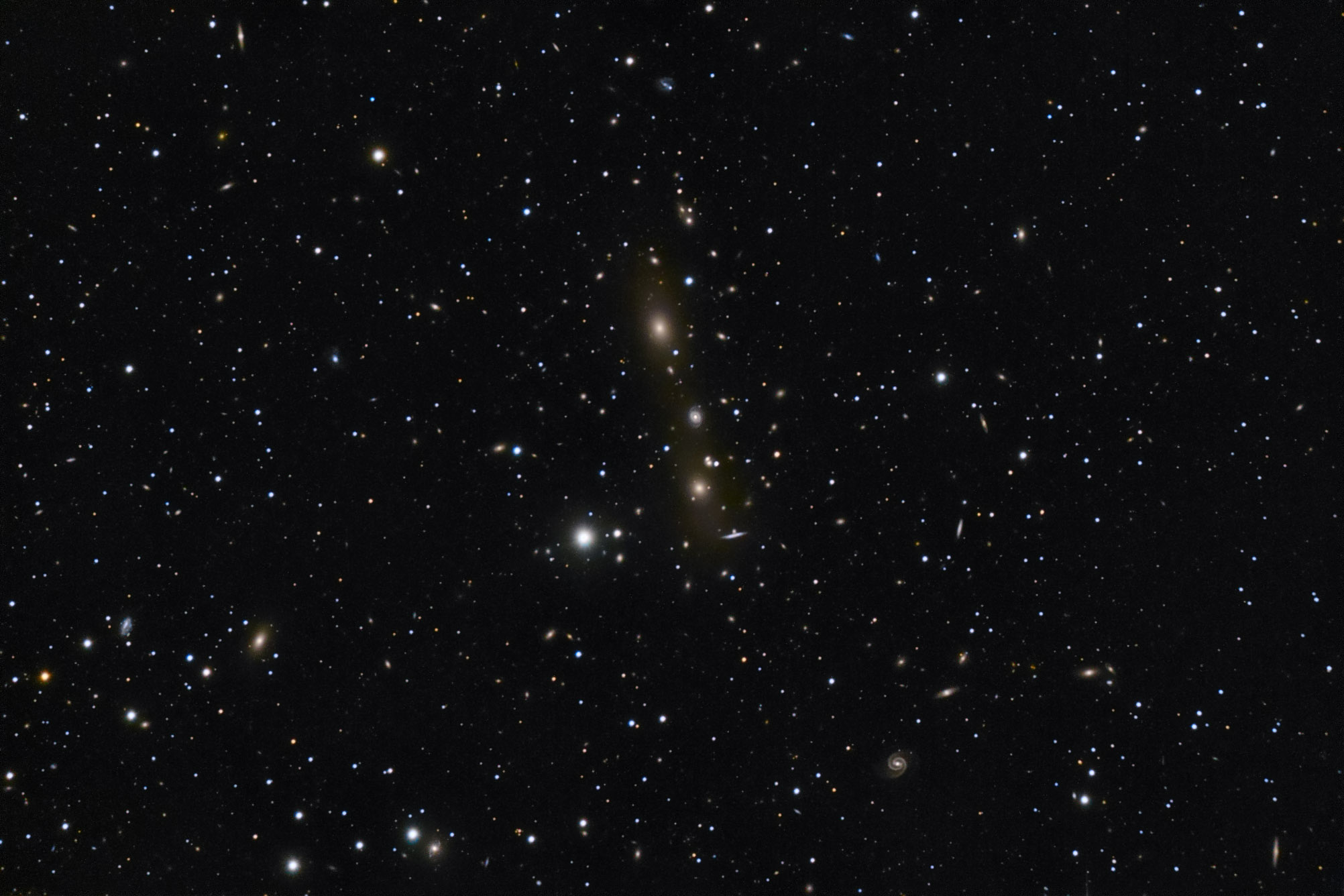 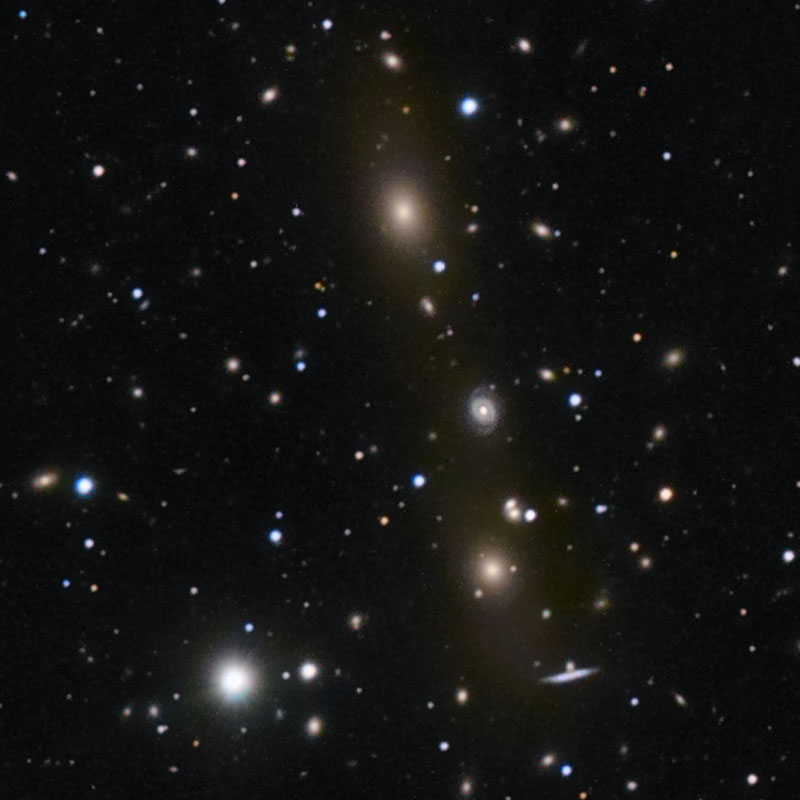 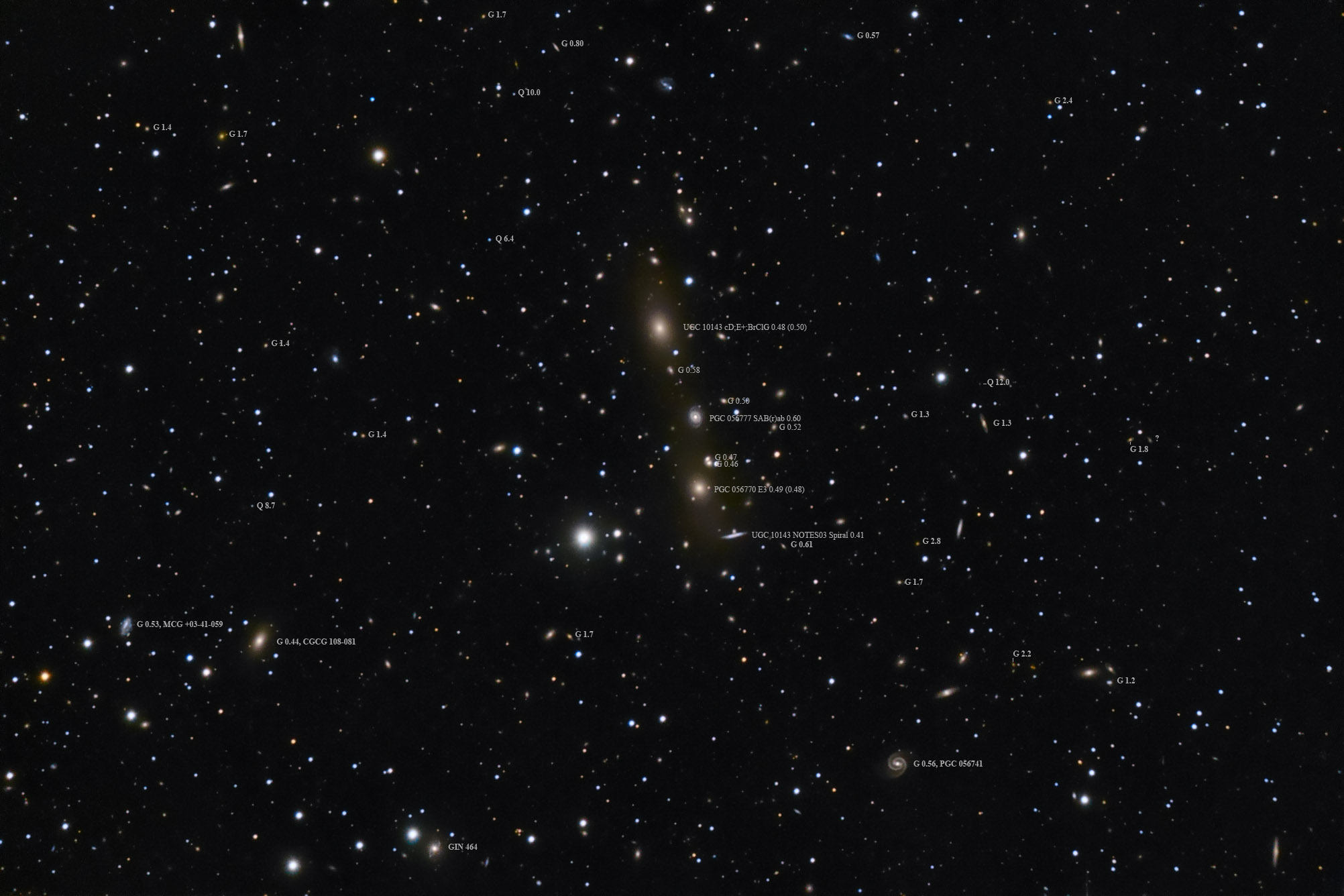