Arp 325 is a chain of galaxies, one minute of arc long, in very southern Aquarius. There is very little on these. No catalog I could find lists them as separate galaxies. Most just number them 1 through 5, usually north to south rather than in RA order as most other such groups are numbered or lettered. Best I can do is either say they are VV 167 or MCG -04-52-014 and number them NED 01 through 05 top to bottom. I wish I could tell you more about this chain but I can\'t. I find only one redshift measurement of one of the galaxies in the chain. It is obviously wrong and NED says the same. It shows it coming toward us when it\'s quite obvious this is a very distant chain and thus would have a high speed away from us not a small one toward us. Neither Hubble nor SLOAN has examined this field. Arp had no comment on this field either. The Rodney Dangerfield of Arp galaxies it would appear.

This is by far the most southerly object I\'ve tried to image. At -21 degrees it is well below my -15 degree cutoff. But the night was super steady giving me a chance. Still, the result is about 4\" seeing but compared to the 8\" that\'s normal this low that is darned good. I can\'t image it at its highest point due to the Meridian Tree which blocks that part of the sky. it was only about 14 to 18 degrees above my horizon when imaged, Some of this time part of the aperture was blocked by the wall of the observatory, blue and green data suffered most from this. If I\'d been thinking I\'d have taken the Red lowest since that low I lose a lot of blue and some green light but dummy did it backwards. This made color balance very difficult. There was no G2V star in the image (they are rather rare) nor could I use my normal formula for calculating the correction as I didn\'t know the light lost to the observatory wall. So this is a WAG beyond all reason. Still, it looks OK, just don\'t go saying these colors are right! I probably should have used this super night to take something high that could have used 0.5 pixels. In fact, that was planned for the next object. But the seeing didn\'t hold so I blew that one. But did get an Arp I didn\'t expect to ever image so something came of it at least.

There\'s little data on the rest of the field. One of the few galaxies with redshift data is west and a bit south of Arp 325. It is near the western (right) edge of the 1.5x cropped image. It is 2MASX J22060492-2106160 or LEDA 832620. NED shows it to be about 780 million light-years distant. There are two other galaxies at this distance in the image and another just off the bottom center of my image. All are similar to the galaxies in Arp 325. Could they all be part of the same group of galaxies? If so that would give a distance estimate for the group. The other chains like this one in Arp\'s catalog are all made up of similar elliptical galaxies of the same color. Here the northern and southern galaxies seem bluer and much smaller in angular size. I don\'t know what, if anything, this means.

I\'ve attached a rather sparse annotated image showing them as well as one quasar. The quasar is magnitude 19.0, wavelength unknown, normally that would be quite bright on one of my images. It is rather dim in this one due to atmosphere extinction that low in my skies. I\'d have liked to have added exposure time but first, the Meridian Tree objected (it blocks 2 hours around the meridian then the clouds seeing did. Never had a night of sufficient seeing after that to get more data. With so little data on the field, I can\'t but guess at my limiting magnitude. So I\'ll guess at about 20, over 2 magnitudes lost over a normal image. I wonder how much more there is in this field I missed.

Arp\'s image
http://nedwww.ipac.caltech.edu/level5/Arp/Figures/big_arp325.jpeg
Notice how he was able to easily separate the northern galaxy from a star below it. This separation is barely visible in my image due to the seeing so low in the sky. 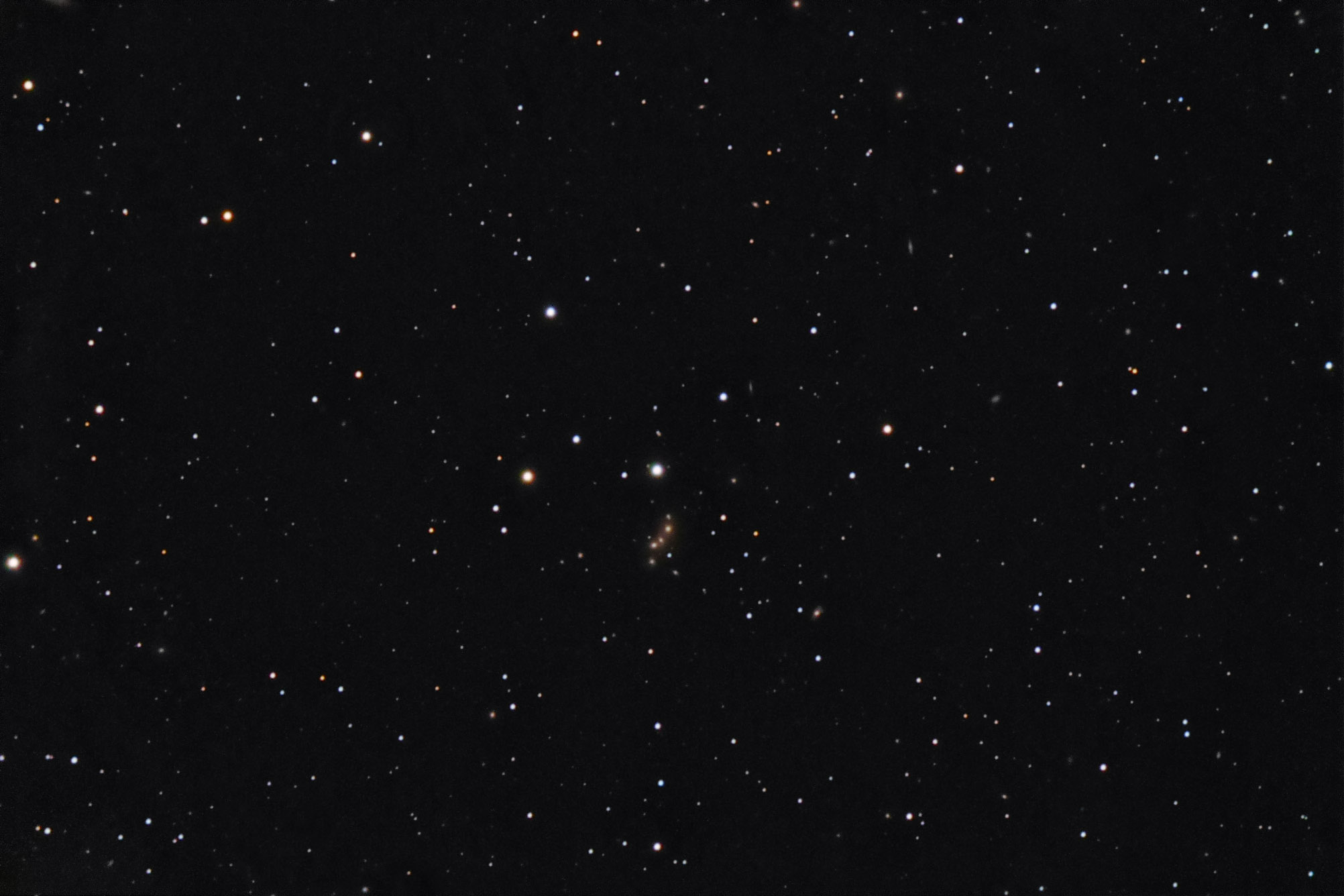 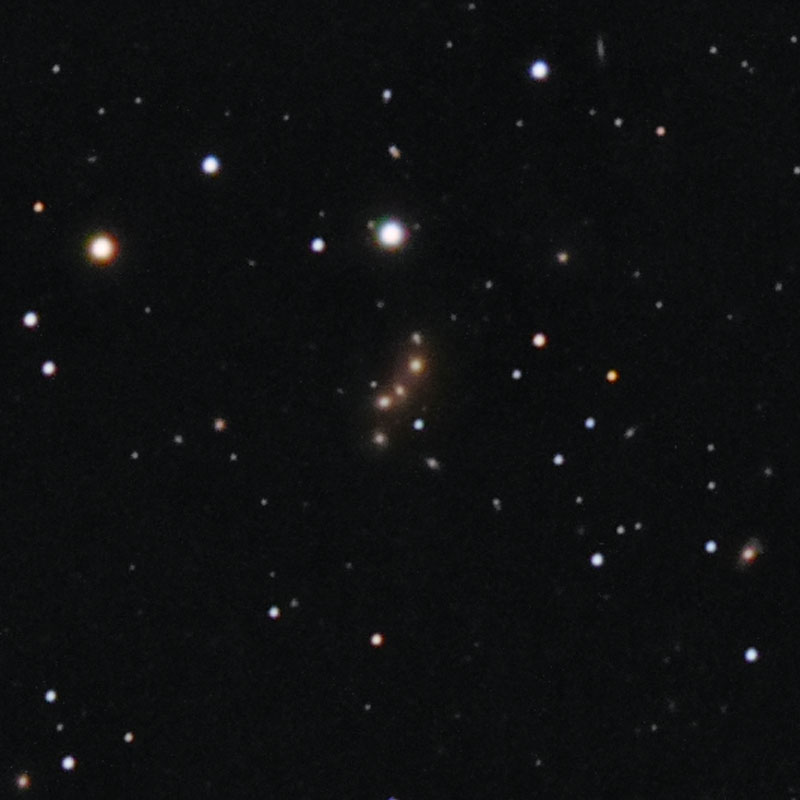