ARP 333/NGC 1024 lies in Ursa Major near the bear\'s nose. It is classed as (R\')SA(r)ab and is about 150 million light years distant. Arp thought it peculiar enough for his catalog due to its extremely thin arms but had no category for this so put it in his Miscellaneous category. ARP 337 (M82) being the most famous member of this class. His comment on Arp 333 reads \"Thin circular arms, star in southeast superimposed on wisp.\"

Inside the faint disk of the galaxy are two short blue arm segments that are extremely thin. I don\'t know if he is referring to them or the outer edge of the disk. The star at the southeast end that obscures the \"wisp\" is a pain. While only the wisp is obvious in his image, mine shows quite a bit more in this area. Is it the remains of a partly cannibalized dwarf? I find nothing on it. If you compare my image to Arp\'s at this star you will note a small reddish condensation just above the star in my image that is missing from Arp\'s image. This bothered me at first. Then I checked the DSS 2 red and blue plates. Arp used film very similar (grainier) that was used for the DSS images using a blue sensitive emulsion but imaging through a yellow filter much of the time. This tended to neutralize the color to better match a true spectral image for visual light. But it does eliminate red objects. Sure enough, the object is missing on the blue plate and present on the red. So its absence from Arp\'s image is easily explained by his emulsion choice. So much for my \"supernova\" discovery. NGC 1024 was discovered by William Herschel on September 18, 1786 but isn\'t in either H400 observing program.

Unfortunately, this one is outside the SDSS coverage so there\'s not much information on this area. With the two galaxies to its east, it forms a three galaxy group; WBL 082/KTG 09. The little northern spiral is NGC 1028 classes Sa by NED and SB at the NGC Project. It looks barred to me so I doubt the Sa classification. Its arm structure is very odd and non-symmetrical. To me, it is more deserving of an entry in Arp\'s atlas than NGC 1024. The redshift distance of 380 million light-years is quite at odds to its non-redshift estimate of 250 million light-years. The lower is NGC 1029 classed as S0/a by both NED and the NGC Project. Both were discovered by Albert Marth on October 1, 1864.

Now while these three are considered a group NGC 1028 is small because it over twice as far away as the other two at 380 million light-years. Thus it is only a line of sight group member. It looks like it could have been included in Arp\'s One Heavy Arm category.

While there are other sizable galaxies in the image I find redshift data on only two others. One is the edge on the spiral southwest of Arp 333. It is FGC 0326 (Flat Galaxy Catalog) classed as Sd and is about 350 million light years distant. So another background galaxy as its angular size would indicate. The other is southwest of NGC 1029 and southeast of Arp 333 on a line through the major axis of Arp 333. It is a small (in angular size) reddish spiral. Like all the other identified galaxies in the image but without distance data it is from the 2MASS survey, 2MASX J02392466+1045321. It lies twice as distance yet again at about 750 million light years. I find no classification on it. There appears to be another \"flat\" galaxy just west of NGC 1029. I couldn\'t find it listed at NED though the very red starlike galaxy between it and NGC 1029 was listed as 2MASX J02393145+1047331. 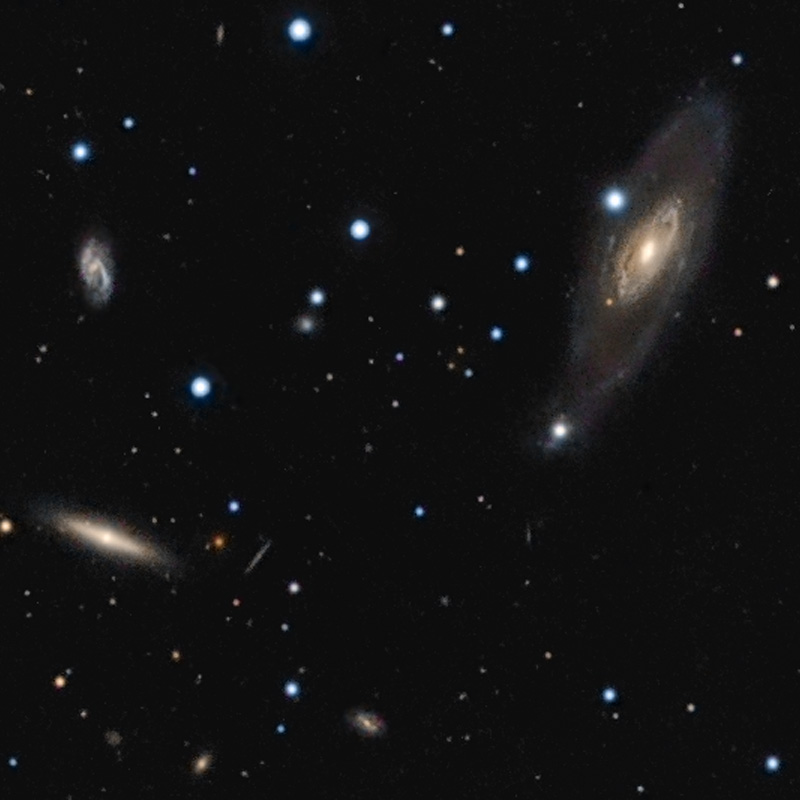 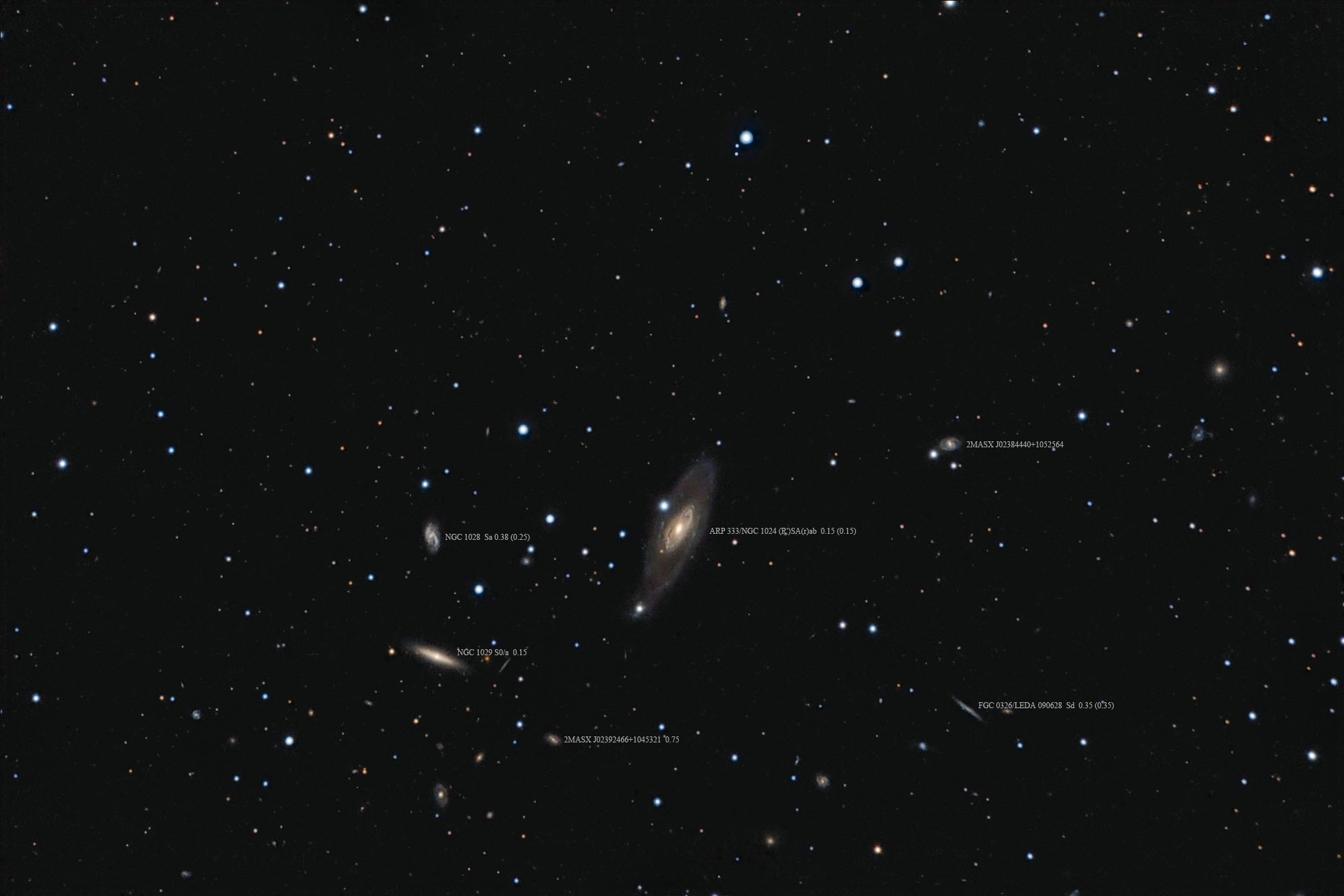 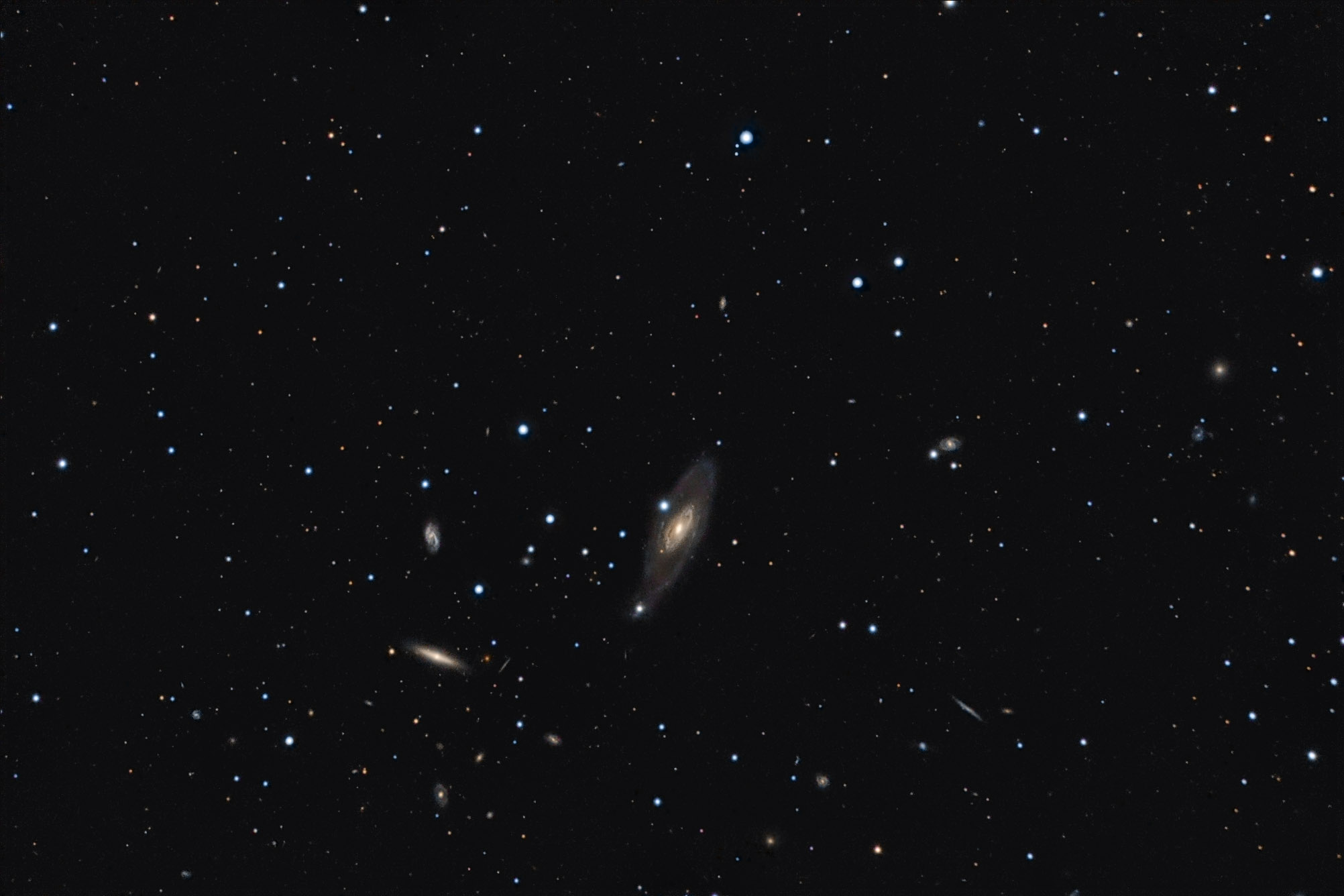