ARP 335 (NGC 3509) is a possible double galaxy that Arp put in his Miscellaneous category, M82 being the well-known galaxy in this classification. Looks to me it would have fit in his one heavy arm class. Ned and some other sources consider it a double galaxy. I thought maybe the other galaxy was the reddened blob directly north of the obvious nucleus. But its position isn\'t recorded as a separate galaxy in NED that I could find. Turns out that on the inside edge of the heavy arm there\'s a blue blob I considered a star cloud in the arm but most sources list it as a \"galaxy within the bounds of NGC 3509.\" Whatever it is, I marked it in the ID image with its distance of 0.37 billion light-years, same as Arp 335. What about the two I have marked as KPG 265A and B? Well, it seems the Kanipe-Webb book on the Arp galaxies notes them in their book. NED says of 265B that it is the southern component of the double galaxy. But NED lists no northern component unless they consider that the main galaxy. NED says most of the parts it lists inside the galaxy are just parts of the same galaxy. Apparently, that included KPG265A. I\'ve marked its NED position. Problem is the Kanipe Webb book shows KPG265A where NED has KPG265B and shows the orange blob I\'ve marked with a question mark as KPG265B. So who is right? I have no idea. Maybe it is three galaxies. The obvious core defining one, 265B defining one that streams west from the bright knots and a third whose core is the orange blob and streams east creating the huge arm? Guess this is why Arp put it in his miscellaneous category. His only comment is: \"Large luminous system.\"

NED classifies Arp 335 as SA9(s)bc pec. As mentioned it is about 370 million light-years distant. To appear so large at that distance it must be a huge galaxy and it is. I measure it as being 250,000 light-years across even without a southwestern arm like the northeastern arm.

Arp 335 is located in southern Leo. The image was taken in late January. Since I was making an annotated image to mark the various parts of Arp 335 I went on to list all galaxies NED had redshift data on as well as the position of several galaxy clusters.

In doing this I found two very blue galaxies (marked with ?) that the Sloan survey, as well as all others, seem to have overlooked. At least I found them in no catalog, I didn\'t check the Mitchell Anonymous Catalog however as it doesn\'t have any useful data. I\'ve found similar uncatalogued blue galaxies in fields covered in detail by Sloan. There has to be some selection effect here but I don\'t know what it is. Since this was first written the SDSS has included these two, possibly due to my request about them. The western one is now listed as SDSS J110406.4+044955.5 at about the same redshift as Arp 334 making it about 36,000 light-years long. The eastern one is SDSS J110508.53+044919.8 and a bit closer at 320 million light-years and 34,000 light-years across.

The galaxy clusters are marked with GC. Some have lines that show the exact center as defined by NED. In other cases, the center is the center of the label itself. I only used the line when that would have covered up objects that might be of interest. You\'ll note that there\'s nothing there in every case but one. At the top left a cluster at 3 billion light-years has the exact same coordinates as a galaxy at 2.9 billion light-years. It may be the anchor of the cluster. The only cluster that I may see members of is the one to the upper right of Arp 335 listed as being 4.4 billion light-years away. While there\'s nothing at that exact position there is a bunch of faint distant galaxies below that position. Not marked is a Zwicky cluster listed as being the size of my image located at the right center edge of my image and containing 120 members. It is so vague I have no idea what it includes but it covers half of my image at least.

The HST hasn\'t released a color image and I only found UV and IR images in their data base. The UV image barely shows the \"red blob\" though it shows well in IR so I used that to make a very noisy black and white image. Note the blob appears to be a background galaxy and the knots below the core of Arp 335 seem to be star clouds but could be the remains of a galaxy it is \"digesting\". 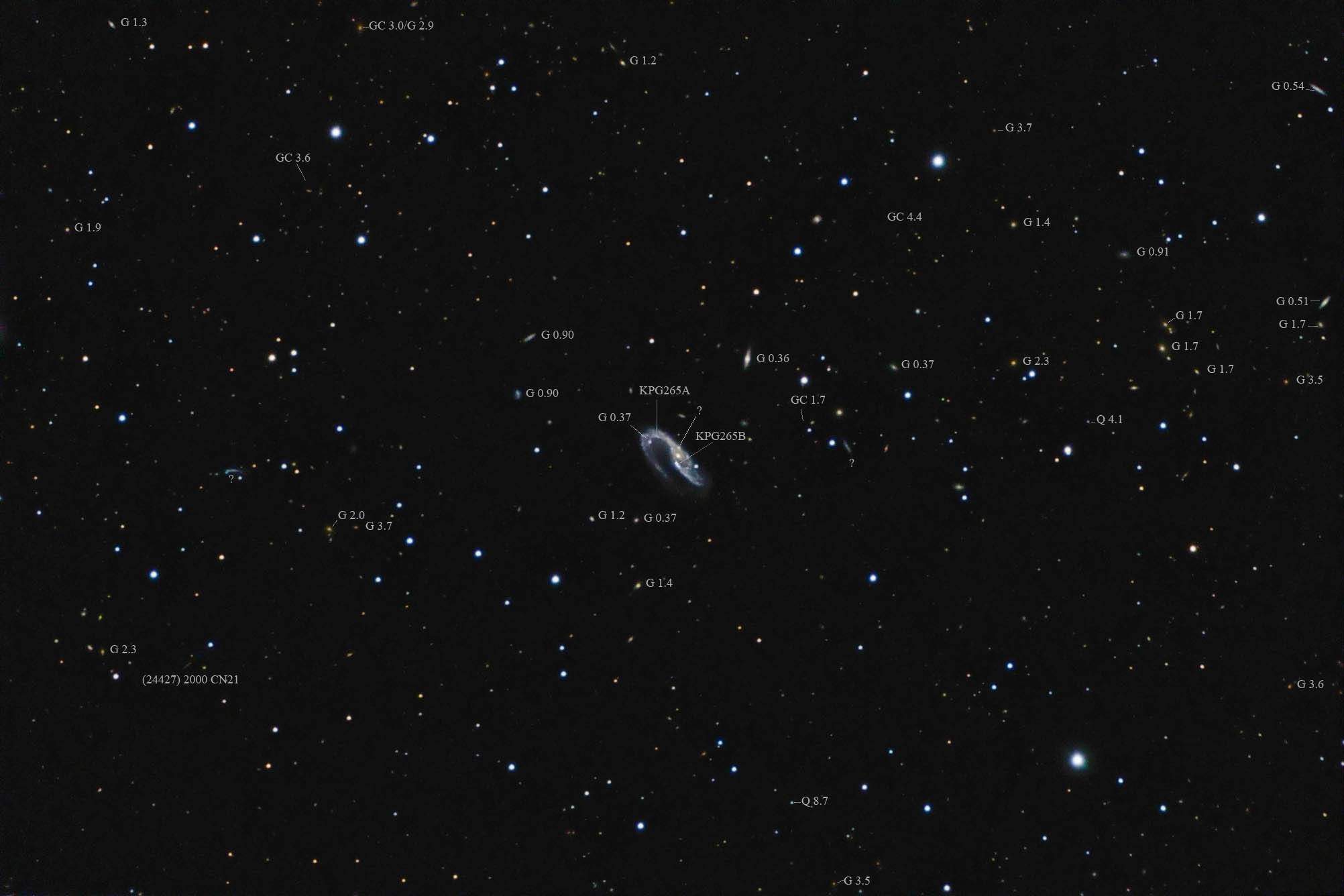 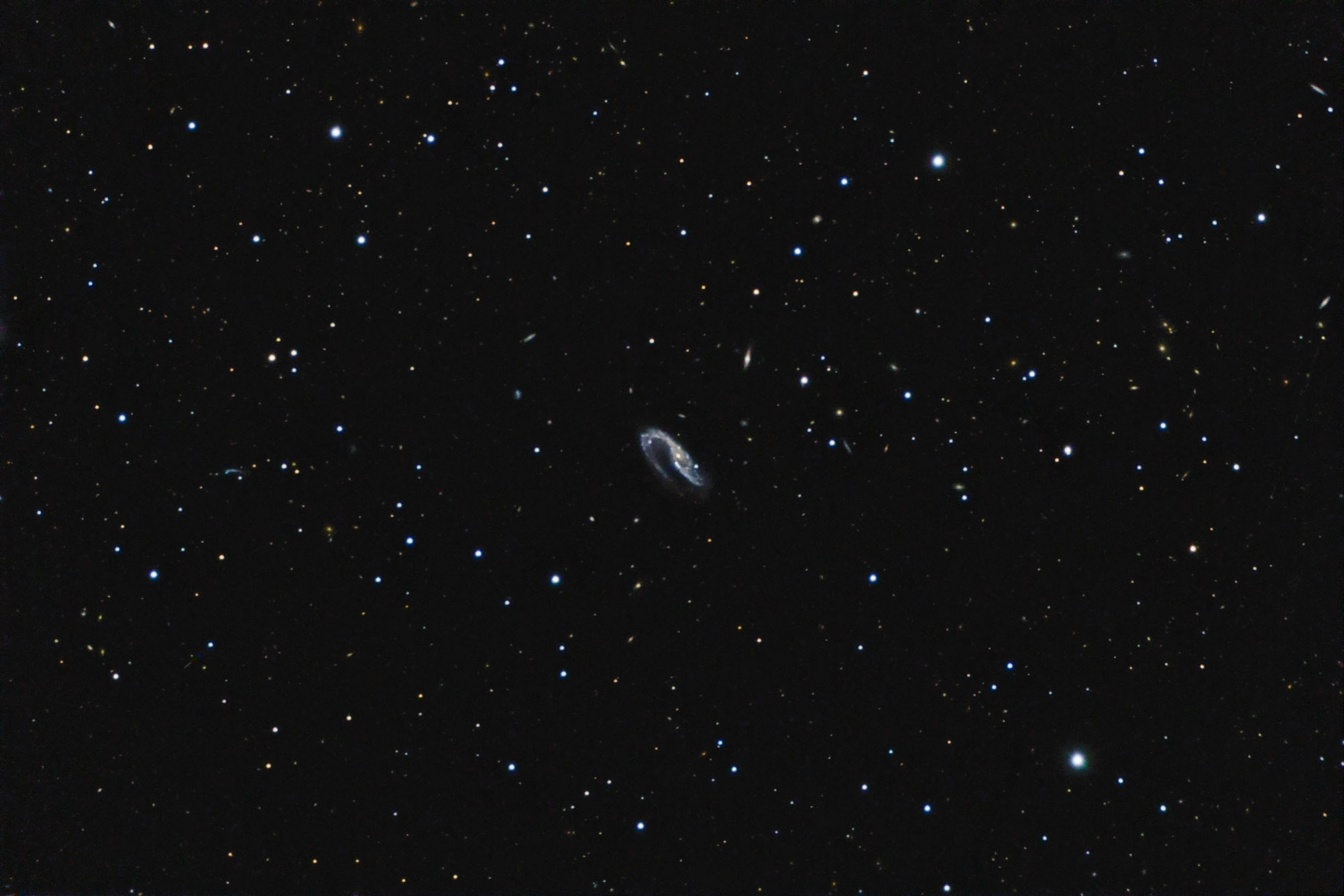 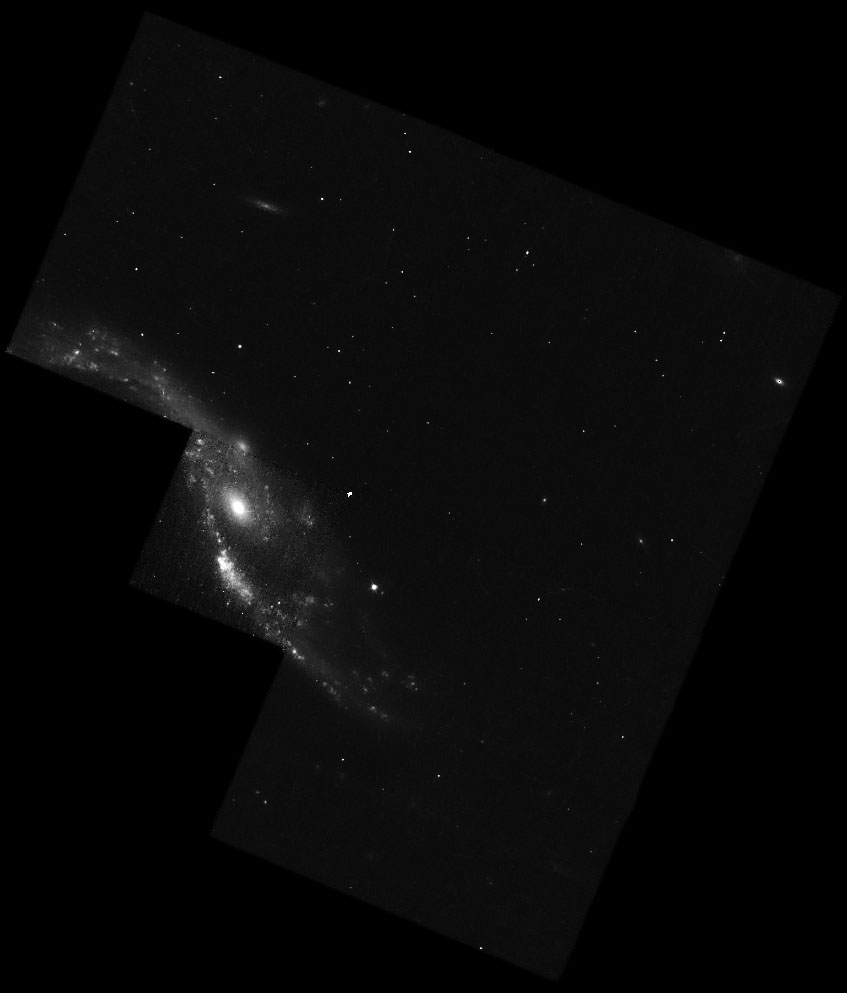