Arp 338 is the most obscure entry in Arp\'s atlas. It is also the very last entry. It is, however, the only one NED lists only by its Arp number giving no other designation. Though likely there is a second entry for it as shown below. It is in one of the other catalogs NED has entered into its database. However, it is listed as PGC 154807 in other catalogs with a magnitude of 16.1. While the bar-like feature is listed in The Sky as PGC 3094767 at magnitude 18.5. Arp 338 falls into Arp\'s miscellaneous class. It is located in southern Sextans. Distance is a bit uncertain. More on this in a bit. Even though the area is rich in galaxies, the Sloan survey doesn\'t cover this area. Nor could I find one paper discussing it other than one that lists it simply as one of Arp\'s peculiar galaxies and another that indicates it appears similar to one the paper is really about. So I\'m coming up blank on this one.

As mentioned, The Sky 6, however, does list it as PGC 154807 but doesn\'t list it under Arp 338. The bar-like feature has a separate listing PGC 3094767. NED may list the bar as 2MASX J10105859-0755016. I say may because its position has error bars large enough to include the main galaxy. Also, it lists a magnitude of 16 which is right for the main galaxy but far too bright for the bar. I suspect it is just a second entry for ARP 338. I find a few references to Arp 338 being a double galaxy. But the way they read, it seems they are not seeing the bar as the second galaxy. Most see the very blue galaxy to the southwest as the one it is paired with. The Sky 6 says it is PGC 1010862. Arp was careful to include it in his image. NED considers Arp 336 a double galaxy but seems uncertain of its position. I\'m used to the vast majority of its objects to be within a 0.5\" diameter error circle. In this case, the error circle is 10 minutes by 7.5 minutes! It is a minute or so off center. So much for precision.

To me, the bar is a separate galaxy as the 2MASX entry suggests. It certainly is an IR source to be in that catalog and its coordinates match the golden core of the bar, not the main face on galaxy. Also, the bar seems to be a bit blue well away from its center just like a typical spiral galaxy would. The only problem is a lack of a dust lane you\'d expect from such an edge on view. The 2MASX catalog does give a redshift of a bit over 700 million light years for whatever it is pointing to. What about the blue galaxy? There\'s no distance data for it either. In fact, it isn\'t in NED\'s database at all! Assuming a 700 million light-year distance for both galaxies I measure the disk galaxy at 120,000 light-years for its long diameter and the edge on at 80,000 light-years in length.

There appears to be a pair of interacting galaxies to the northwest of Arp 338. They appear to share a common envelope. There are two levels to this envelope. A bright inner one and a much larger faint outer one. Without any distance data, I can\'t estimate its size. The upper left one is in NED but with no redshift. The other one isn\'t in NED\'s database. In fact, most of the galaxies in this image aren\'t listed in NED\'s database. Only a very few have redshift data. All appear at about the same distance as the bar in Arp 338. If the bar is a separate galaxy in front of the other one then that one would be further away, how much further is unknown.

Normally in an image of an Arp galaxy NED will identify several thousand galaxies. So few were identified in this field I\'ve noted each and every one by name and its distance when that is available. That\'s how little there is on this entire field. 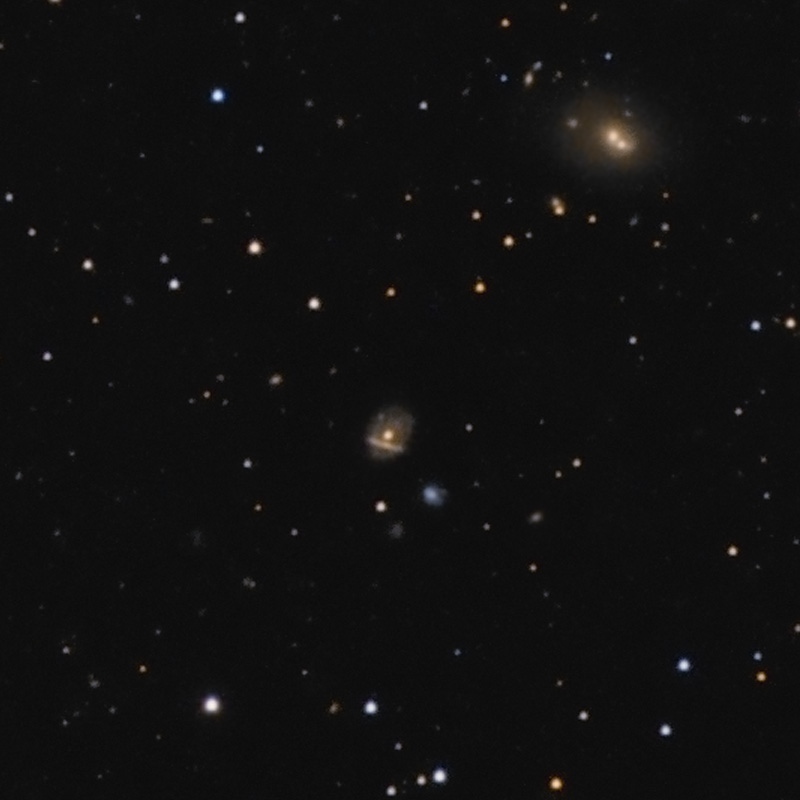 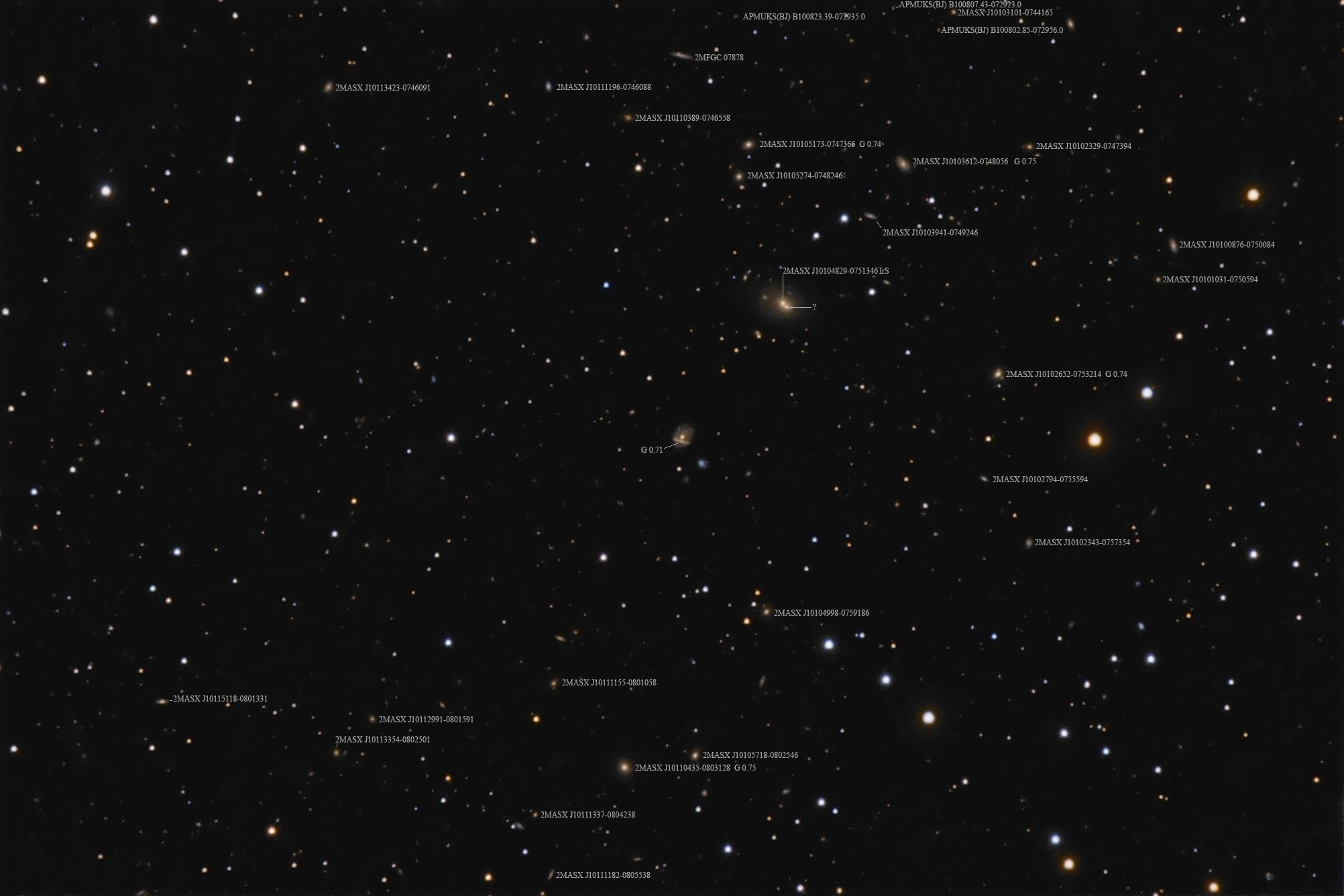 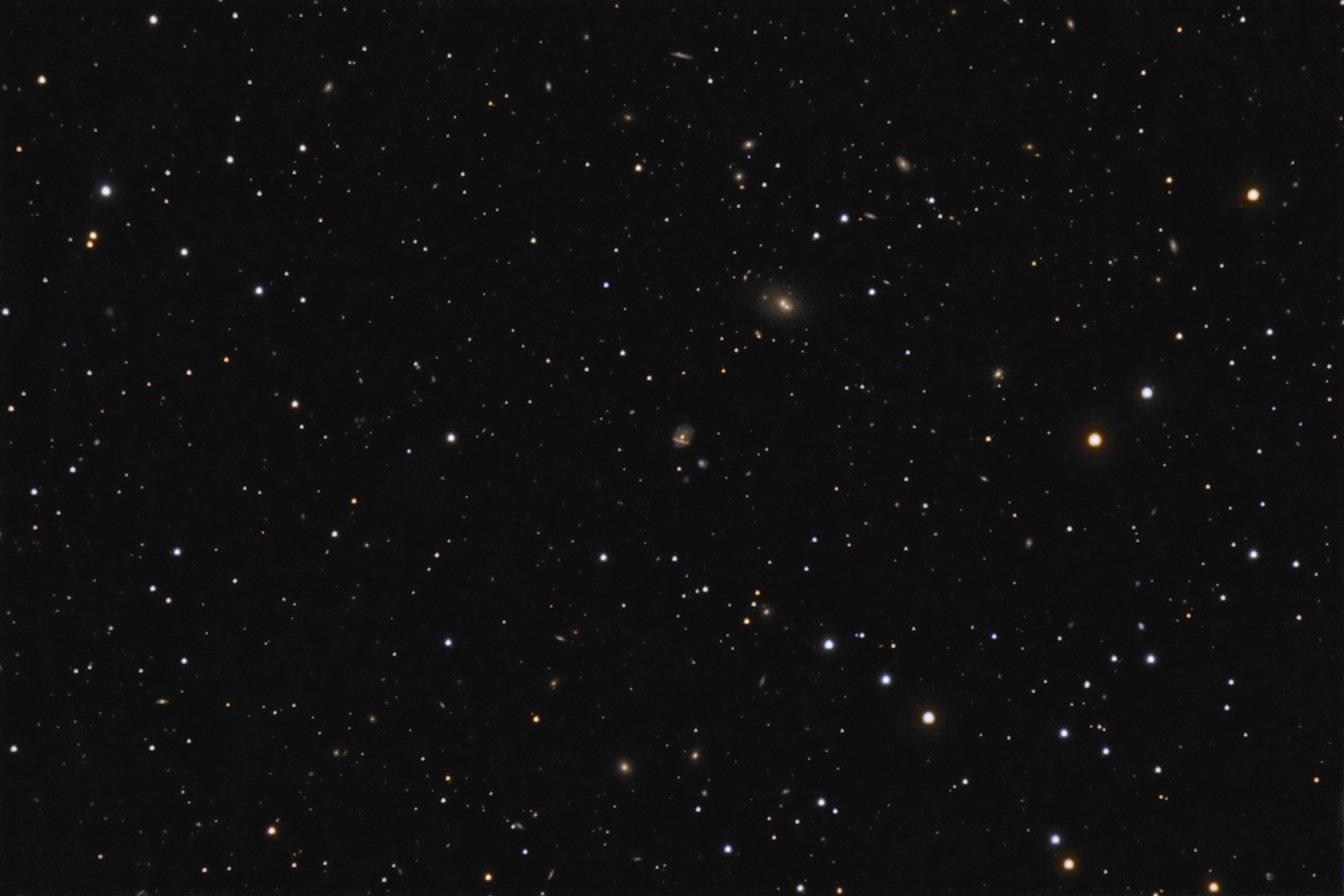