M40 is simply the double star Winnecke 4. The separation has been steadily increasing since Winnecke first measured it at 49.2\" in 1863 at a position angle of 88 degrees. Hipparcos in 1991 said 52.8\" at 77 degrees. Intermediate measurements show the pair to be separating on a straight line so they are a line of sight pair. There seems to be some discrepancy about their spectral color. Lick Observatory\'s catalog shows them as G0 and F8 while Brian Skiff says K0III and G0V. Unfortunately, my color data is severely distorted by clouds, especially during the red frames. I tried on a second night for new red data only to have clouds again create a problem. Thus I\'m not sure about my colors. I did push them too but I seem to see a late G and early F. Looking at other photos online I see the few color ones showing white and slightly blue though the Sloan Survey image would appear to agree to Brian Skiff\'s K and G classification. I\'m likely too blue with the hotter star.

The main reason for imaging it was I\'m trying to get color digital images of all M objects north of 15S. So was going to make a quick image of it but when I saw the two nice galaxies appear in the framing shot I decided to move to a midpoint between them and use my normal exposure time. As mentioned, clouds hurt the color data. Another I should revisit.

The barred spiral, NGC 4290 reminds me of \"The Eye\" galaxy, NGC 3646, in that it has a large ring surrounding a rather normal galaxy, a barred spiral in this case. The inner ring is somewhat distorted with the western side nearly linear rather than circular in shape as the eastern half is.

Assuming a distance of 140 million light-years and a diameter of 2.02 minutes it is only 80,000 light years across, much smaller than NGC 3646. NED and the NGC Project class it as SB(rs)ab: with HII.

The spiral to the west is NGC 4284. It is somewhat further away; 200 million light-years by redshift and a bit further, 225,000 by the average of Tully-Fisher measurements though a measurement by IRAS agrees to the redshift value. At first glance it appears smaller in angular size than NGC 4290 but when the drawn-out faint arm pointing toward NGC 4290 is considered it is actually larger at nearly 2.8 minutes. That, using the 200 million light-year distance gives a size of 160,000 light-years or twice that of NGC 4290. It is classed as Sbc by both NED and the NGC project. Except for the faint drawn out arm, it is a pretty normal looking, if very large spiral galaxy.

There\'s a really flat galaxy just under a bright star toward the bottom of the image below NGC 4290. I was hoping to find something on it but NED fails to pick it up and also fails to pick up a much fainter smudge beside it. These are marked by a question mark. Also, a very blue smudge of a galaxy just above a very blue star-like galaxy is also missing from the catalog though the blue star-like one is listed.

The image has several very blue quasars as well.

M40 was used by Messier as a known point when looking for a reported galaxy in the area that was erroneous. Since he had the coordinates of the stars I put it in his catalog -- or so the story goes. SEDS has a bit more on this: http://messier.seds.org/m/m040.html 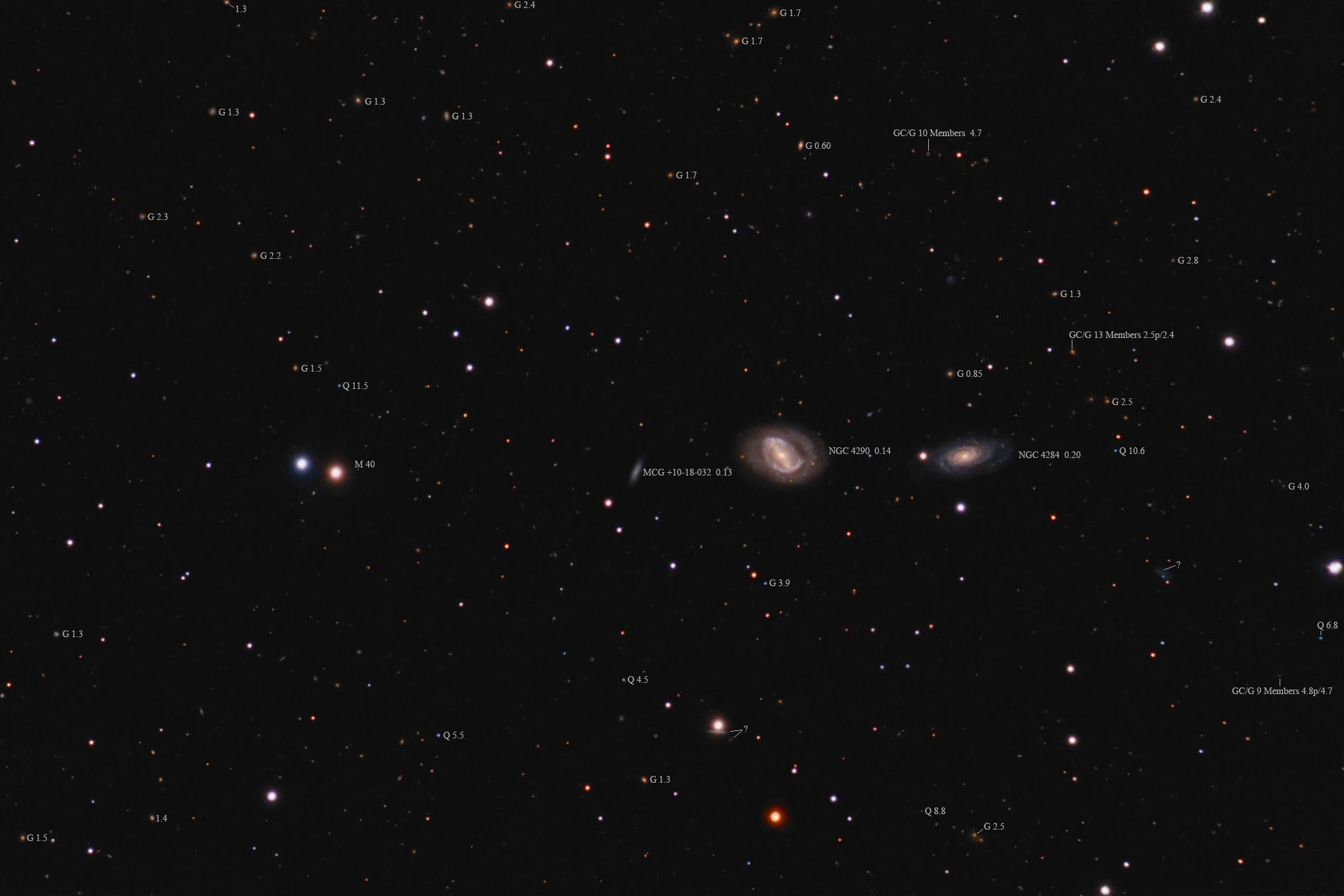 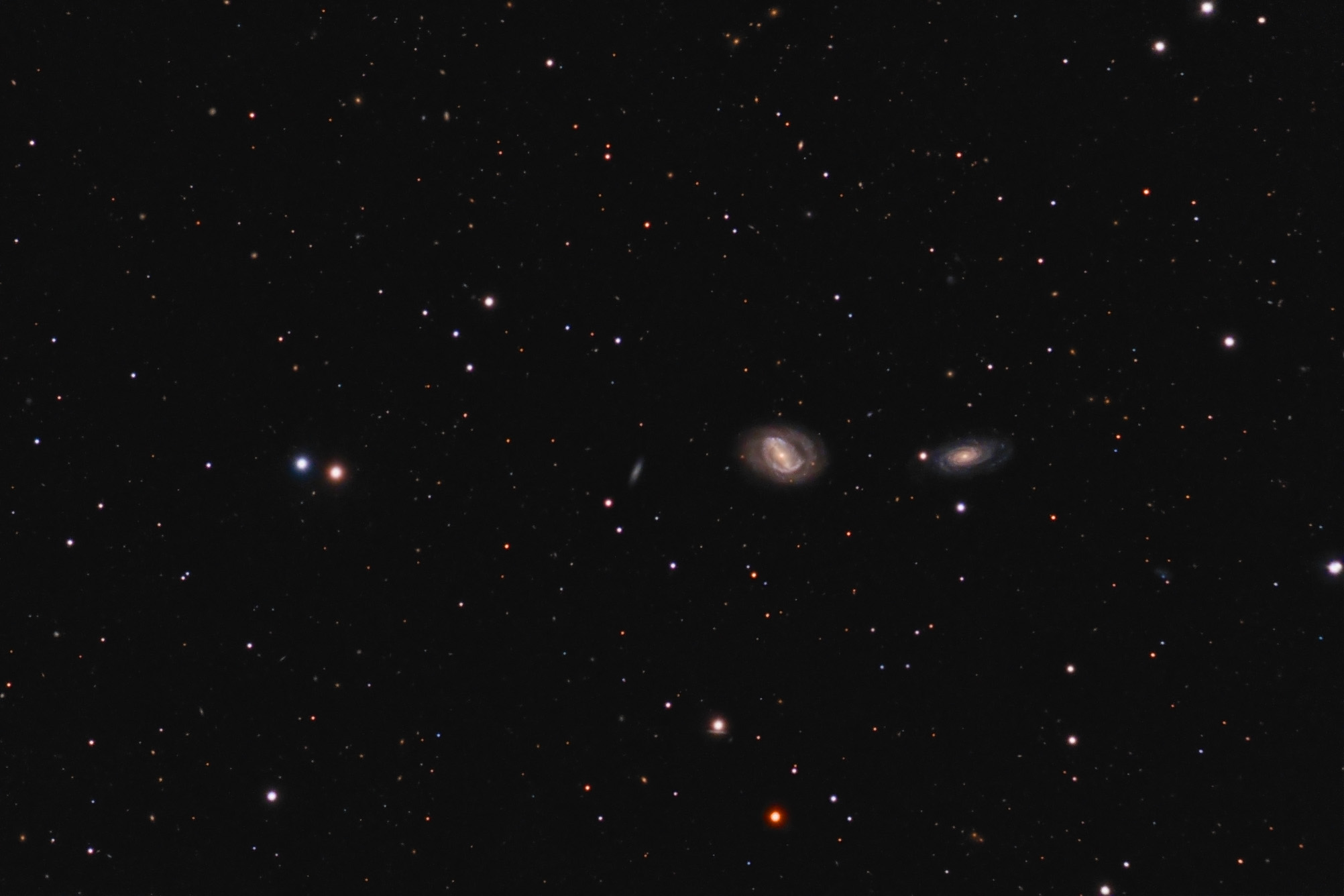 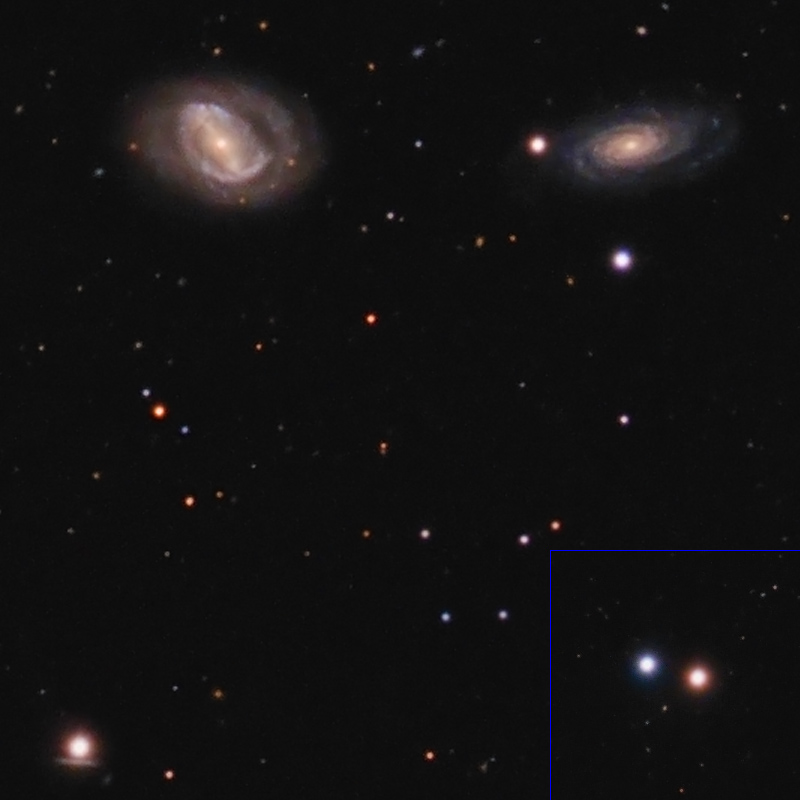