M41 is a rather famous open star cluster below Sirius. But at -20 degrees it is down in the winter gunk for me. Still, being one of the more famous M objects I had to give it a try on a really \"good\" night. More on the imaging issues later.

M41 is thought to be about 2300 light-years away. It is a rather sparse but bright star cluster covering about 38 minutes of arc which is larger than my field\'s width of 33.7 minutes and a lot larger than its height of 22.5 minutes. So I only capture the center of the cluster. It is famous for the K3 orange star at its center though contains other fainter K stars as well. They don\'t show their color visually in small scopes however so are often overlooked. This is a rather young cluster, thought to be about 190 to 240 million years old. This compares to our sun\'s age of 4,500 million years. At about magnitude 4.5, it is visible to the naked eye. There\'s weak evidence Aristotle saw it long before the invention of the telescope. More certain is his discovery of averted vision helping to see faint objects in the night sky. It was first seen telescopically by Hodierna but his observations went unknown for centuries. John Flamsteed found it February 16, 1702 and Le Gentil saw it in 1749 so it was well known by Messier\'s time. He recorded it in 1765. http://www.seds.org/messier/more/m041_ari.html

Up here moisture in the air condenses out forming ice crystals our air is so cold, -30C is typical on a good clear night and -40C/F not uncommon. These crystals form a haze over the lake I live on. They literally fall like fine snow out of a clear sky. Imaging low like this means imaging through a lot of this ice crystal haze. Like atmospheric particles, these fine ice crystals scatter blue and green light. The center of this image was in a fog of blue and some green light scattered by the brighter stars of the cluster. GradientXterminator had to work overtime but did a great job on this haze. I also forgot I was imaging a cluster and used my normal 10 minute subs. This is way too long for bright star clusters as the stars saturate making it difficult to recover their true color. Fortunately, there are techniques for finding the color from the fringes of the star\'s bloated, overexposed image and using that to color the star. I don\'t like to do that but did in this case. Of course, the overexposure also made the haze from the ice crystals worse as well. Being so low stars distort due to atmospheric refraction. I tried a technique used to reduce motion blur and finally managed to sort of make it work. At least the stars look somewhat round but bloated. The haze I had hid most of the faint Milky Way background stars. This helped the cluster stars to stand out but does give a rather empty looking background compared to what I\'d have otherwise. Unfortunately, there are many such Messier objects this low in the sky making it next to impossible for me to image them from this far north. 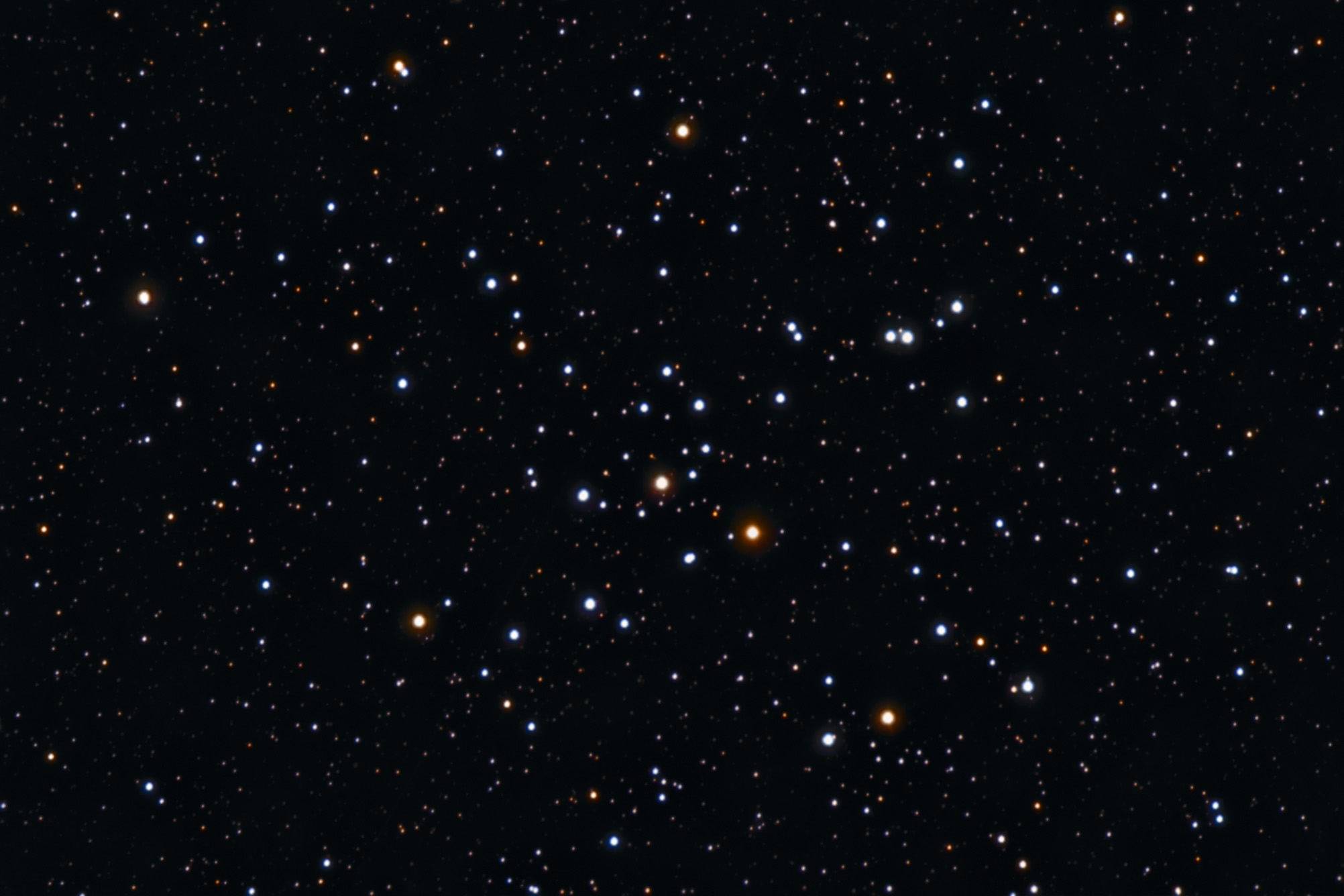