M50 is an open cluster in southern Monoceros about 3200 light-years distant. Whoever decided Monoceros was a unicorn was on some really \"good stuff\". The cluster resides in the winter Milky Way so has a fair number of background stars. In winter we are looking out, away from the galaxy\'s core. So while the stars are numerous they are spread much thinner than those in the summer Milky Way. Assuming the 3200 light-year distance it contains about 200 stars in a sphere 20 light-years across. That would put the 200 stars in a volume of 4200 cubic light-years or one star every 20 cubic light-years. In the same volume around our sun, there are 16 stars including the sun. But one is a triple star system and three are double star systems. At 3200 light-years these multiple stars would be seen as one so we\'d see 12 stars but two of these are brown dwarfs, invisible in ordinary light, reducing the count to 10 that would be seen in a scope like mine from this cluster of 200. So yes it is a cluster. Also, the number of stars brighter than our sun in the cluster is several dozen while there\'s only two brighter than the sun in our similar area, Sirius and Alpha Centauri. At that distance, our sun would be barely visible visually in my 14\" telescope and too faint to see in my 10\" scope. Most of the stars seen in this cluster in my image are brighter than the sun by a factor of 100 times. That\'s because they are hot stars that live less than a billion years. The cluster is thought to be about 125,000 years old according to WEBDA. So its very brightest stars have lived and died but it still has plenty of stars 100 times the brightness of the sun.

Most credit the discovery of this cluster to Giovanni Cassini sometime in 1711. Charles Messier recorded it on April 5, 1772 but it is uncertain if he made an independent discovery or was reporting it from Cassini\'s observation he may have run across. Various writers seem to have differing opinions on both of these \"discoverers\". SEDS says Messier did discover it.

For reasons lost since it was taken in March 2008 I took the image at 1.5\" per pixel then cropped it a bit. So the image is smaller than normal. I\'m guessing seeing was poor and the cluster didn\'t really need higher resolution. But I left no notes about this. 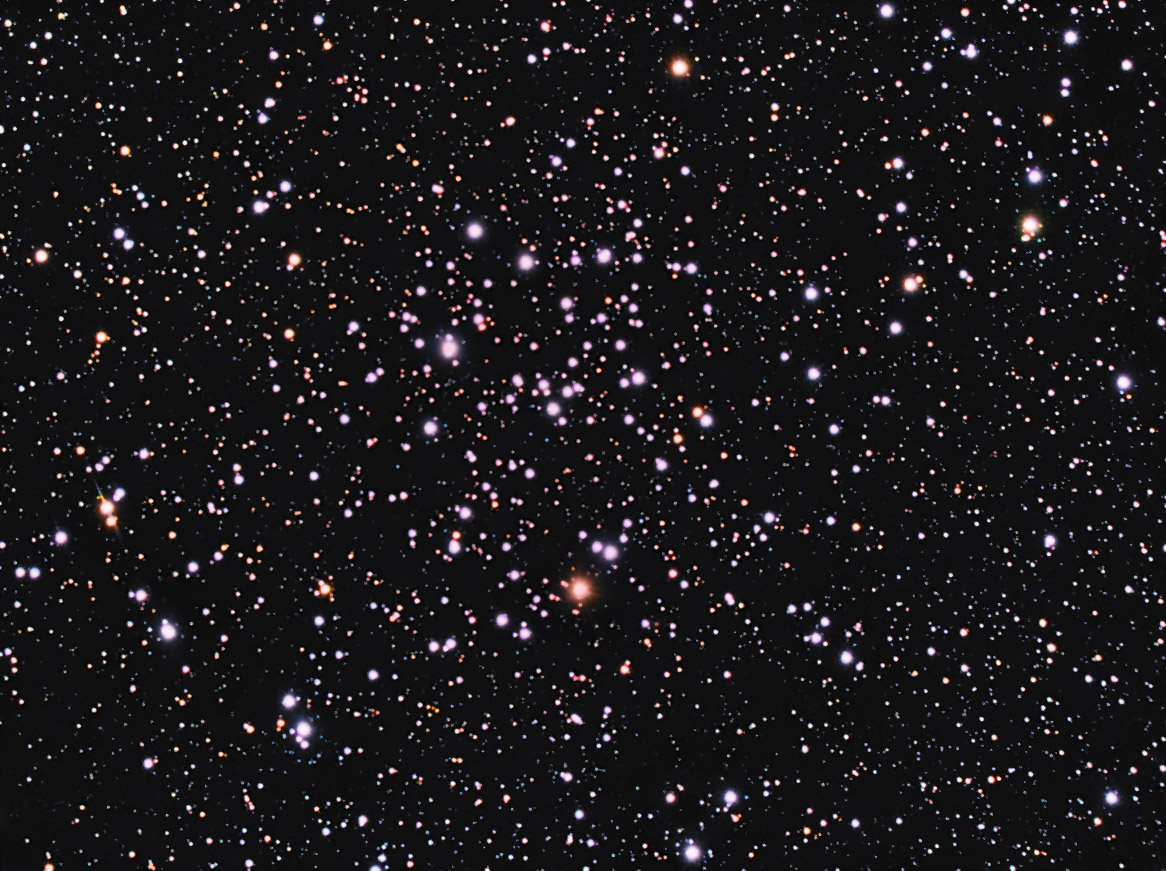