M97 is known as the Owl Nebula due to its two \"eyes\" looking back at you from a round \"face\". It is a planetary nebula, the death throes of a sun-like star. In this case, it may have been a bit smaller than ours. The nebula contains about 0.15 solar mass while then white dwarf (16th magnitude in the center between the two \"holes\") is about 0.7 solar mass. Some mass was likely lost that we don\'t see glowing. The nebula is estimated to be about 6000 years old and maybe 1500 light years away. Though SEDS says 2,600 and there are other estimates, even SEDS lists others. Notice the many faint galaxies in the background. If it looks like a dim star but is slightly fuzzy it is a galaxy of billions of stars.
You can read more at: http://messier.seds.org/m/m097.html

For a photo of both M108 and the Owl that is a good example of why you can\'t trust a photo to show the right color of an astronomical object see: http://messier.seds.org/more/m097-108_more.html

The film used to make that photo is virtually insensitive to the color, blue-green, of OIII light. Thus the nebula comes out red when really only the outer edge is that color. OIII is the light that gives my shot its blue-green color. Color film isn\'t designed for line spectra. Ektachrome I used at one time for color work in my film days didn\'t see the red rim, only the blue-green OIII light. Even CCD filters have problems with color shift since they record only 3 colors and something that emits light at only one frequency will appear to have the color of the center of that filter\'s passband not the color it really had. Realizing the problem my filter maker (Astrodon) overlaps the blue and green filters so OIII light hits both in such a way as to preserve its correct color as seen by the eye. But that means other blue and green objects may not be quite right. There is a processing step that can correct for this, however.
For more info on planetary nebula and the light they emit see:
http://messier.seds.org/planetar.html

My shot used 5, 5 minute luminosity frames (I took 6 but a really bright satellite ruined one by going right through the nebula where I couldn\'t remove it with any tool I have and know how to use. I recently picked up one that might do it but haven\'t figured it out yet. Then the usual 3 by 5 minute color frames were used.

The above was taken from my original 2006 post on this object. Today a bright satellite isn\'t a problem. Then I actually had the tools but lacked the knowledge how to use them so killed that frame needlessly. But my technique was very poor greatly killing star color, letting system noise pollute the image making it far noisier than it should have been and the scope was obviously out of collimation to boot.

I\'ve prepared an annotated image for the field that I didn\'t know how to do 11 years ago. Though there\'s little of great interest in the field. I did notice a super blue star that somehow survived my heavy-handed technique that killed color in many stars and weakened it in all others. The star is by a galaxy with no known redshift to the northeast (upper left) of M97. Almost always these turn out to be blue quasars. Once in a while, they are super hot white (really should be called blue) dwarf stars whose planetary nebula has long since dissipated. But in this case, NED lists it as just a star or Ultraviolet Source with no distance data. I still have to wonder about it as I\'ve never seen anything but quasars and very hot white dwarf stars with this intense of a blue color.

I reprocessed this one as best I could but was severely handicapped by my stupidity 16 years ago. I threw out the original data and calibration files after I processed it back then. I didn\'t even save the 32 bit TIFF file as back then I made only 16 bit TIFF files as that was the best by software could do. Still not saving anything but a JPG with rather strong lossy compression limited what I could do. This one, like many of that time frame (mostly M objects), is in dire need or a reshoot. Though I doubt it will happen as I still have many hundreds of objects I\'ve never taken still on my to-do list. 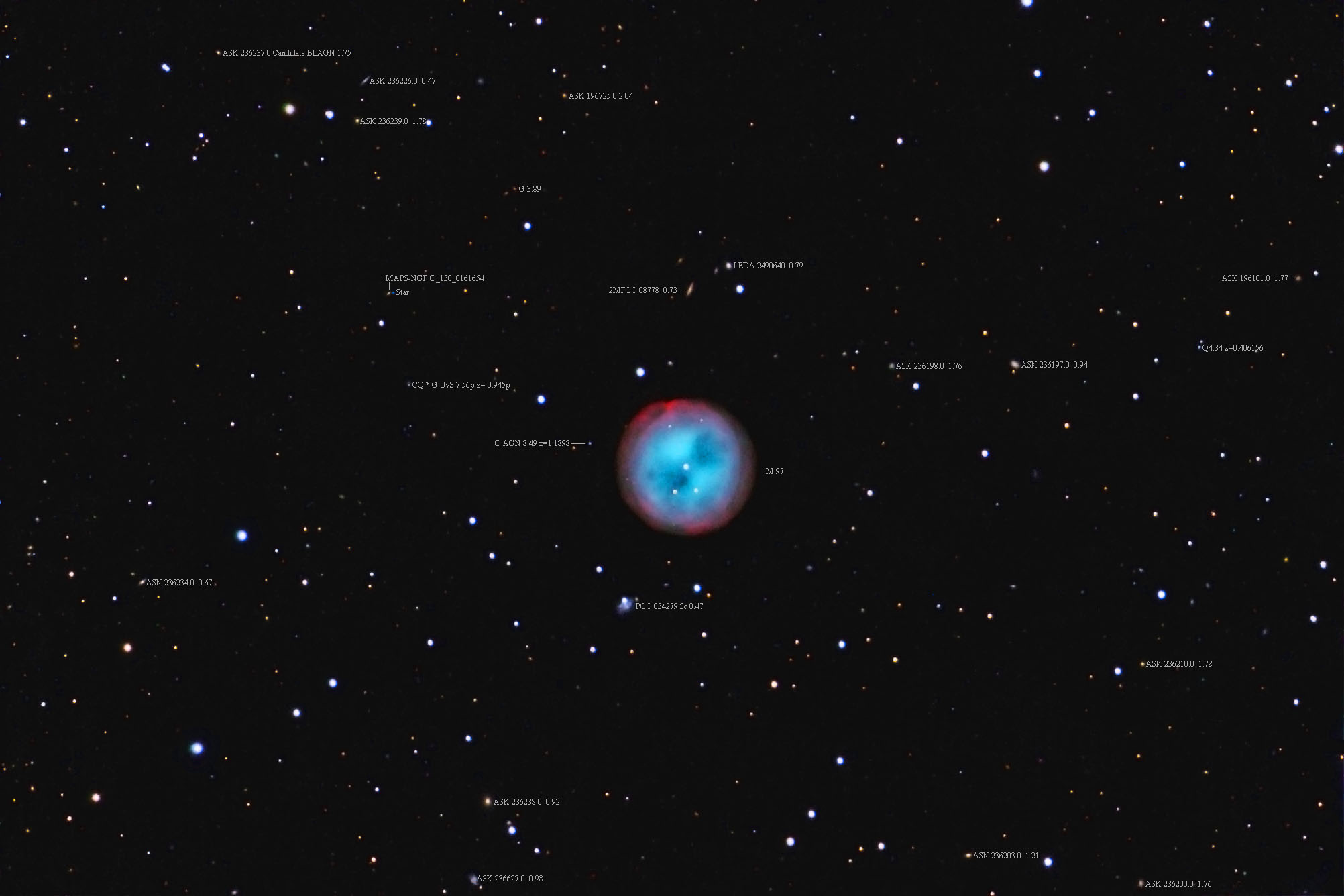 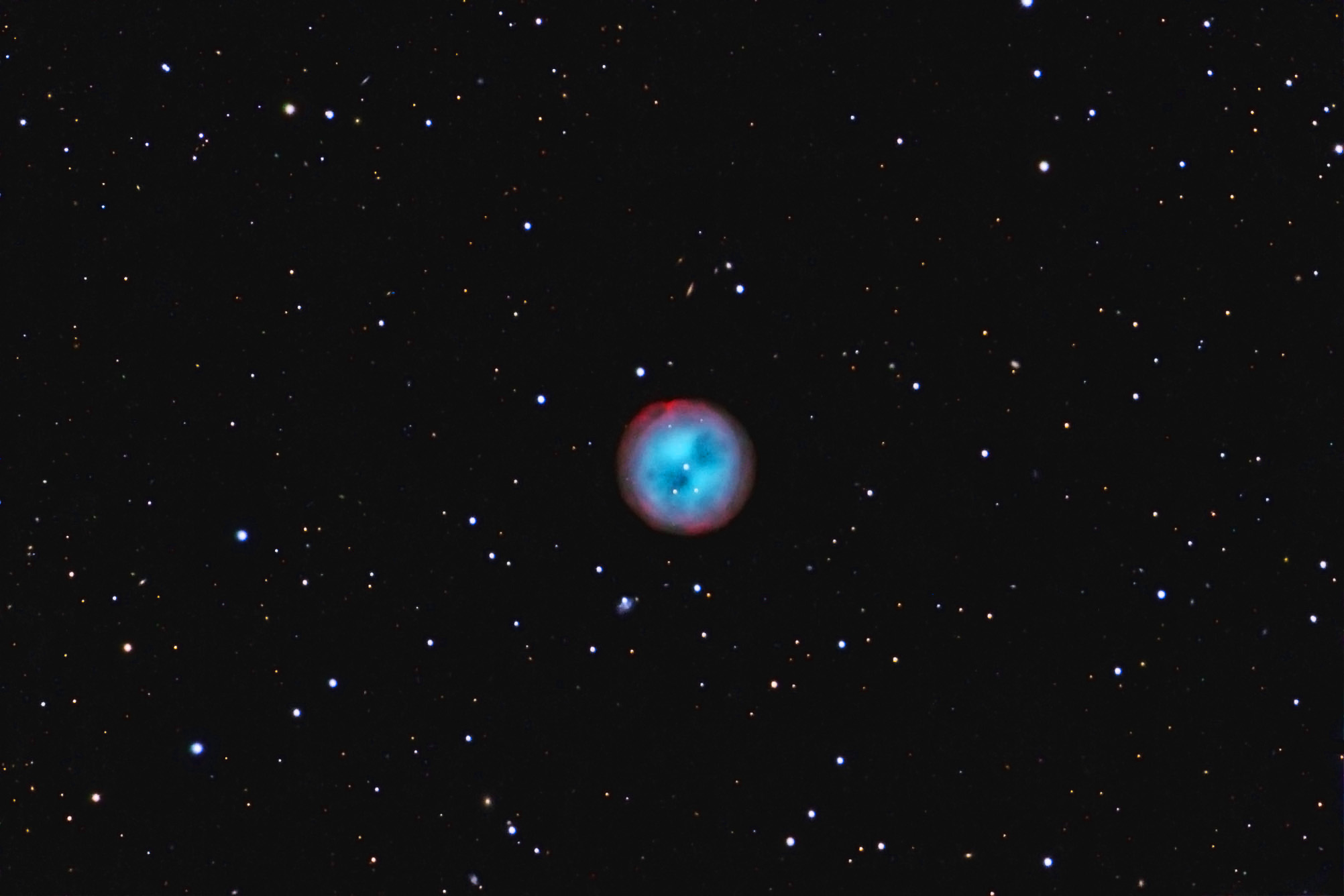