M103 is a somewhat young cluster being about 22 million years old according to WEBDA. Other sources say it to be 25 million years old. When a cluster forms it is made up of a few super hot short lived stars and far more dimmer sun type stars and even more faint red stars. The huge super hot stars die quickly. Many won\'t even make it to 20 million years of age. So by studying the color of the stars in a cluster, we can tell its age. It can\'t be any older than the maximum age of its hottest, bluest stars. Since they are very bright, even though few in number they provide nearly all the light of a young cluster. In the case of M103, located at the edge of the Milky Way in Cassiopeia the fainter members are very difficult to tell from background Milky Way stars. This cluster is at a distance of 7150 to 9200 light years, distant for an open cluster. So even in my scope, the typical star is too faint to see as a cluster member.

For this reason, early estimates of the number of stars in this cluster were so low some even denied it cluster status. Turns out Messier was right, it is a cluster. But instead of the 25 to 60 members assigned by astronomers even as late as the 70\'s we find it has at least 172 members we can see and likely a heck of a lot more just too faint to see at its distance. One of its blue stars has already evolved into a red giant, its the obvious orange star near the center. Since it has already evolved off the main sequence we know it was originally even more massive and brighter than the remaining stars. It has since lost mass in its red giant stage and will soon make a big boom in the sky. For a few weeks, it will again be the brightest star in the cluster as it blows itself to bits and creates either a neutron star or maybe a black hole. Come back in a million years and we should know -- probably a lot less. So being young this cluster, except for that one red giant is very blue. Typical of most open clusters. It seems tidal gravitational forces in our galaxy rip clusters like this apart. So before they are more than a few hundred million years old their stars are so scattered about no cluster is left to see. Our sun likely formed in such a long extinct cluster. Since there\'s no need for high resolution I\'ve reduced this image in size by one third as my usual 1\" per pixel scale didn\'t add anything useful.

It was discovered by Pierre Méchain in April 1781.

You can read more about it at:
http://messier.seds.org/m/m103.html 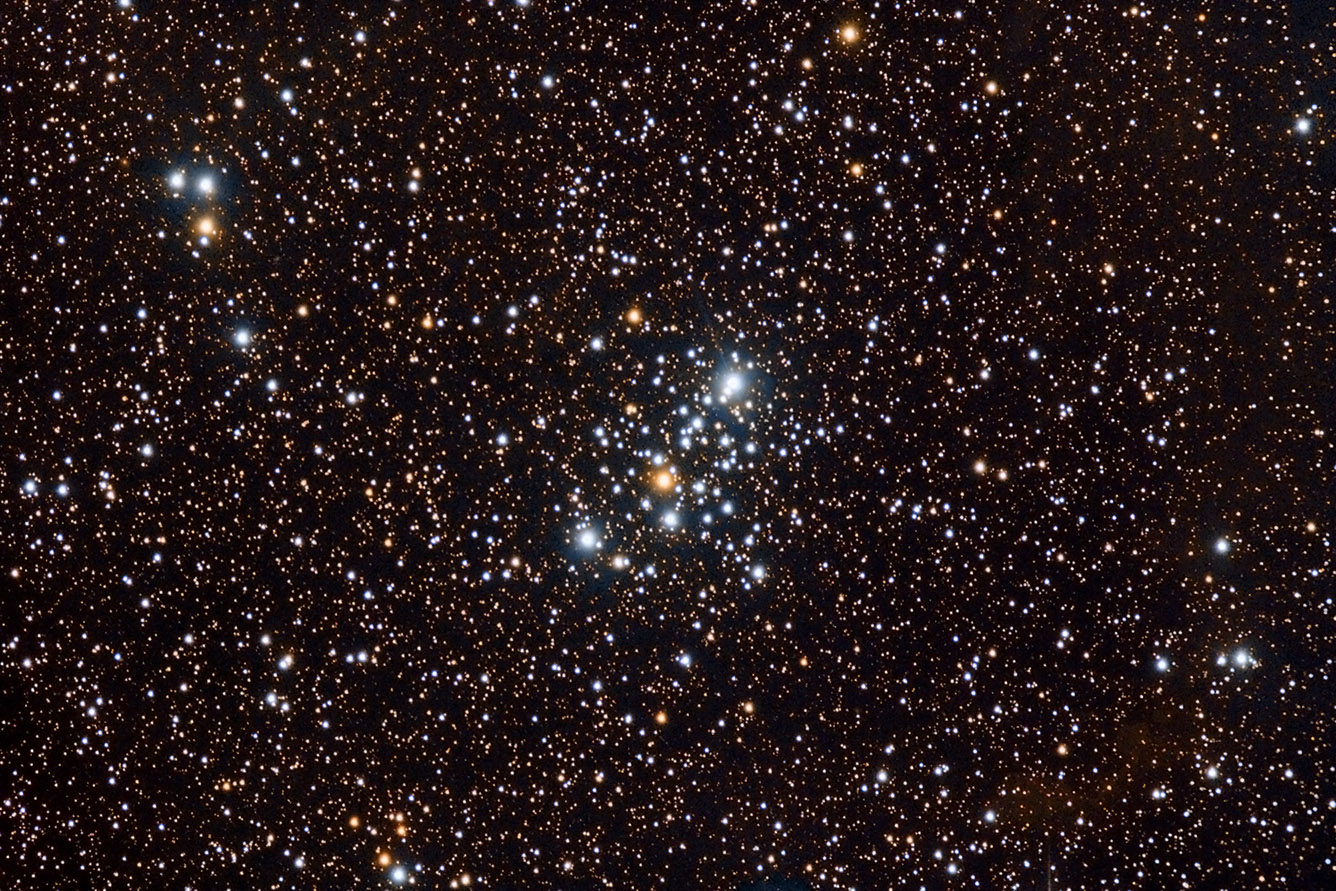