NGC 271 is a somewhat distorted, face on spiral in Cetus. Its redshift distance is a bit over 170 million light-years. Tully-Fisher measurements (all from the same data) range from 191 to 220 million light-years depending on how you look at that data. The value with the smallest error bar says 191 million light-years while a median value is 218 million. Pick your candidate or roll your own.

Off the southeast edge of the galaxy is a puff of stars. The arm had pretty well faded out then returns in this puff or is it a separate object? NED offers no help here. I note the other arm on the other side also fades then reappears though looks again like the arm rather than a puff. Still, it is likely it is just part of the arm.

SAO 128981 is an 8th magnitude star that gives trouble here. Its glare overrides the galaxy. Could that create a false sense of the drop in the arm\'s intensity creating the appearance of a puff? I don\'t think so, the drop off was quite obvious even through the glare of the star. I find no amateur images of this one but the various POSS images and the Sloan image all are bothered by the star but also appear to show the puff as real.

This area of the sky hasn\'t been well studied for galaxies. I found only 3 others with redshift data. One, to the southwest, has a similar redshift and is likely a companion. The other two were about a billion light-years out. Out of frame at the top right is UGC 00505 also at about the same redshift as NGC 271. Some sources list these three as a triple. The odd shape of NGC 271 might be due to interaction with UGC 00505. For reasons I can\'t determine I managed to not get it in the frame. My notes say to catch it yet I didn\'t.

NGC 271 was discovered by William Herschel in 1785 and at magnitude 12.2 moderately bright in a 10\" scope. Yet it isn\'t in either of the Herschel 400 observing program lists.

One of the galaxies with redshift, in the lower left, is a face on spiral with featureless arms at my resolution. It is a rare galaxy in that it is both a strong IR source and a Ultraviolet Excess source. Hence I included both its 2MASS and GALEX designations.

Preparing an annotated image, especially in poorly covered areas like this results in lots of issues. A SCT scope can create ghost images that look much like faint dwarf galaxies. These I usually process out. Since several have asked me recently about them I left in the one that is in this image. It\'s above the 2MASS/GALEX galaxy. In well-covered fields, they are easy to spot as they are not in the various catalogs. But in a region like this where most are unlisted things get more difficult. They are faint and thus their absence from the POSS plates may not mean they aren\'t real. I have to download the FITS and then stretch like crazy. I also get the Sloan image when available (often not the case in these regions) and do the same. In this case, the Sloan image is available. Neither it nor the POSS images show any sign of it so it is quite likely not real. But at the top center of my image is a similar faint smudge that is real and in this case listed in NED though that is rare in fields like this one. It is [dIM97] J005019.82-014447.4. It shows how similar a real low surface brightness galaxy is to a ghost image the SCT corrector can create having a flat surface ideal for reflections. The odd linear feature towards its southern edge is a pair of faint stars not part of that galaxy. NED had no redshift for it so that is shown by \"na\".

Another issue is shown by the galaxy to the lower left, MCG +00-03-016. NED has no distance for it yet labels it a dwarf. In other images, I\'ve seen similar \"dwarfs\" with a redshift value of over a billion light-years. Now you can\'t be a dwarf when 100,000 light-years across that these have to be or at a very bright magnitude as others can be. Something is wrong in these cases. But when there\'s no distance data is it really a dwarf or just another that isn\'t what is claimed? This one sure does look like it could be a dwarf so I didn\'t add a question mark but still I can\'t be certain that\'s the case after all the obvious errors I\'ve seen in other fields.

Why some galaxies don\'t make a catalog and others do always amazes me. APMUKS(BJ) B004829.03-021415.6 is a galaxy in the Automated Plate Measurement UK survey. Just to its north is a galaxy that for some reason wasn\'t seen by the survey. Seems automation misses the rather obvious sometimes. Another reason the various Galaxy Zoo projects are finding so much not found by the computers.

The annotated image is sparse as few galaxies in the image had redshift values. I\'ve labeled others without redshift data when mentioned above. Hundreds of others missed their 15 minutes of fame it seems. 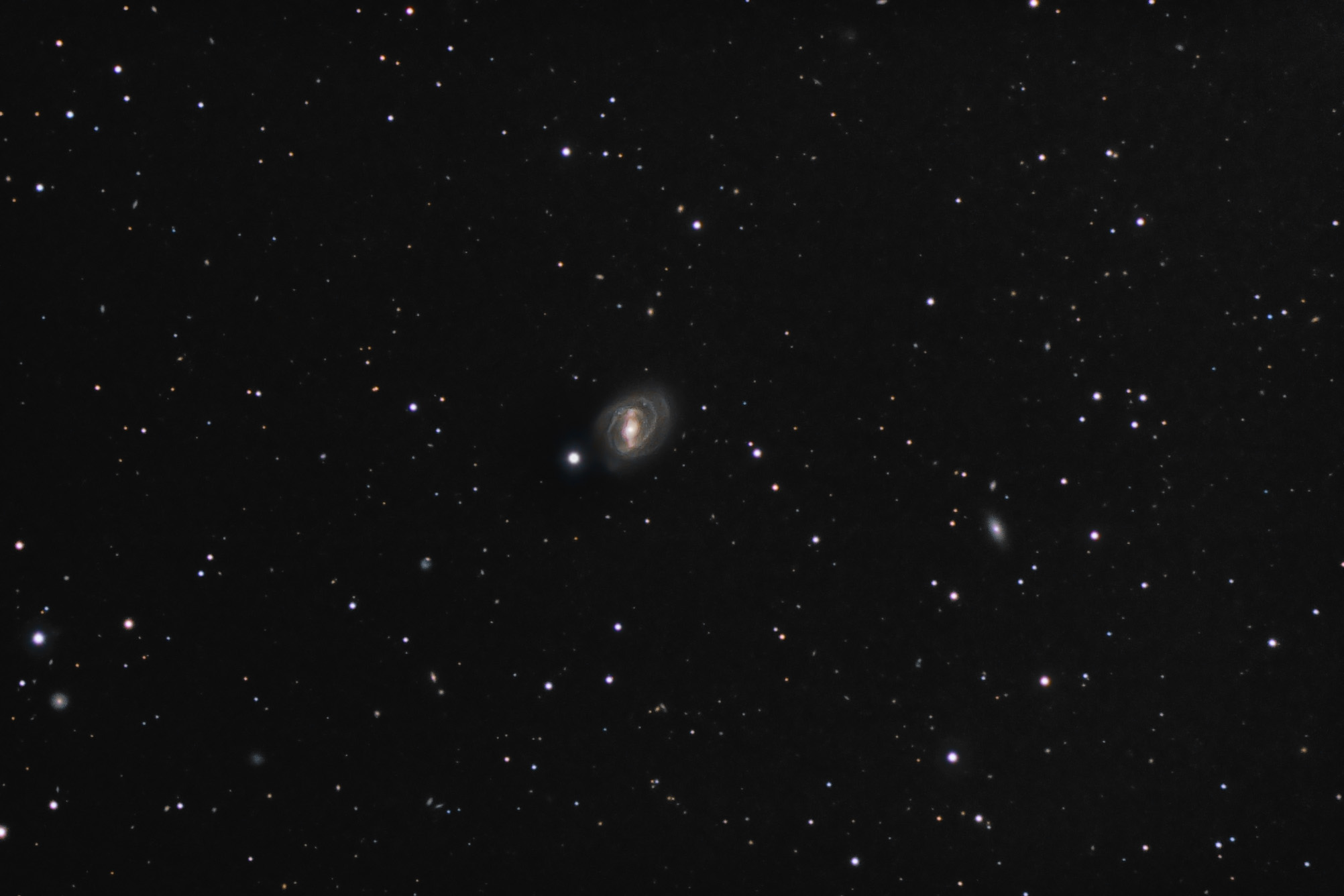 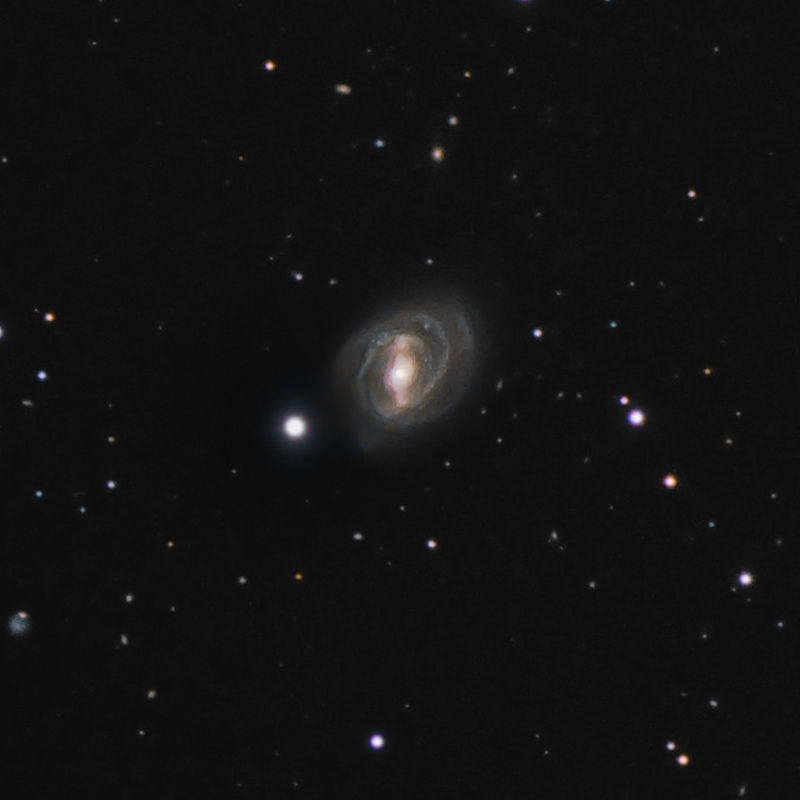 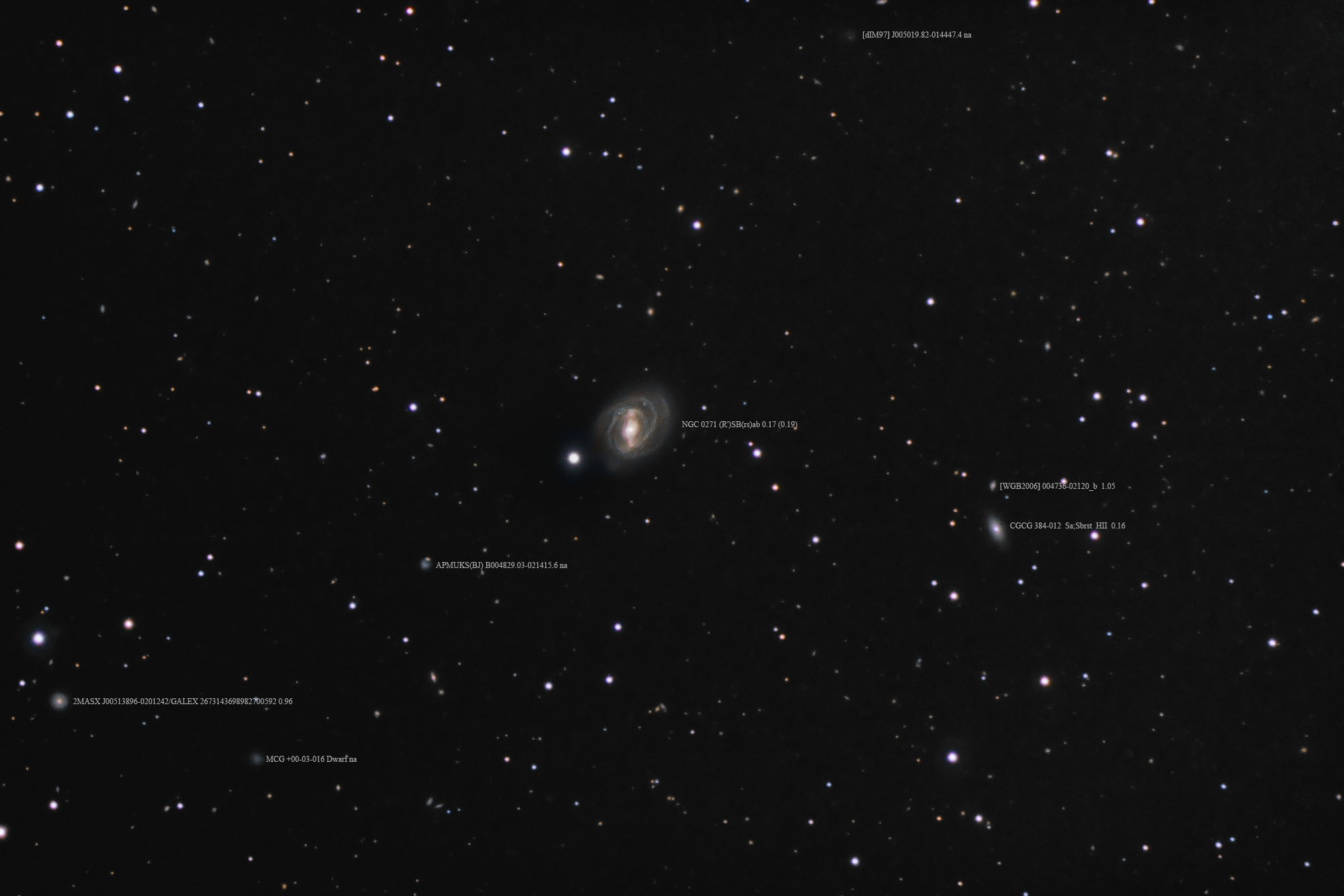