NGC 337 is a strange looking, possibly barred, spiral located in Cetus 60 to 70 million light-years distant. I measure its size at about 50,000 light-years. NED and Seligman classify it as SB(s)d with HII emission. The NGC Project says Sc -- they see no bar, neither do I. It has no central bulge which is unusual. It\'s disrupted state may be due to a merger. Here is what one source says about it: \"The arms in NGC 337 cannot be well traced from the nucleus. Perhaps part of the central pattern is a bar, from whose opposite ends originate two of the arm fragments, but the pattern is not regular. The association of the other segments with any overall spiral pattern as a whole is even less obvious.

\"The irregular morphology of the arm segments may be due to a close encounter; this might be established if the small structure with a central knot (a nucleus?) and associated bar with its associated stubby (s)-type arms can be identified as a companion. But it is not certain that this galaxy is, in fact, a companion, or even if so, if it is ready to merge.\"

Another paper http://arxiv.org/pdf/1304.0447v1.pdf says it contains 8 ultraluminous X-Ray sources and is bulge-less. These may be due to the long-sought intermediate-mass black holes. They correspond to the bright blue and pink HII regions seen in my image. I thought one to be the galaxies core as it was slightly red but when I added H alpha data it turned out to be a bright nebula with the core a bit below it. I\'m unaccustomed to seeing emission nebula this close to a galaxy\'s core. Checking the Sloan image it is bright blue indicating it is full of young UV stars. Sloan\'s filters miss H alpha so these regions are always blue in their filters. It is possible the quote above may be seeing this HII region as the possible \"companion\" it mentions.

The galaxy was discovered by William Herschel on September 10, 1785 and is in the second Herschel object observing program. This is what put it on my to-do list. Oh yes, the galaxy has had two recent type II supernovas; SN 2011DQ and SN 9/2014. This is consistent with it being a starburst type galaxy.

Only one other galaxy in the image has a redshift value and that is one of a pair of galaxies on the right edge of my image. The one is at 1 billion light-years. The \"companion\" is not listed so could just be line of sight and not a real companion. I suspect they are a real pair but without more, I\'m left guessing. With so little data I\'d not have prepared an annotated image but then two asteroids appeared in the image so I prepared one to give the details on these two space rocks. 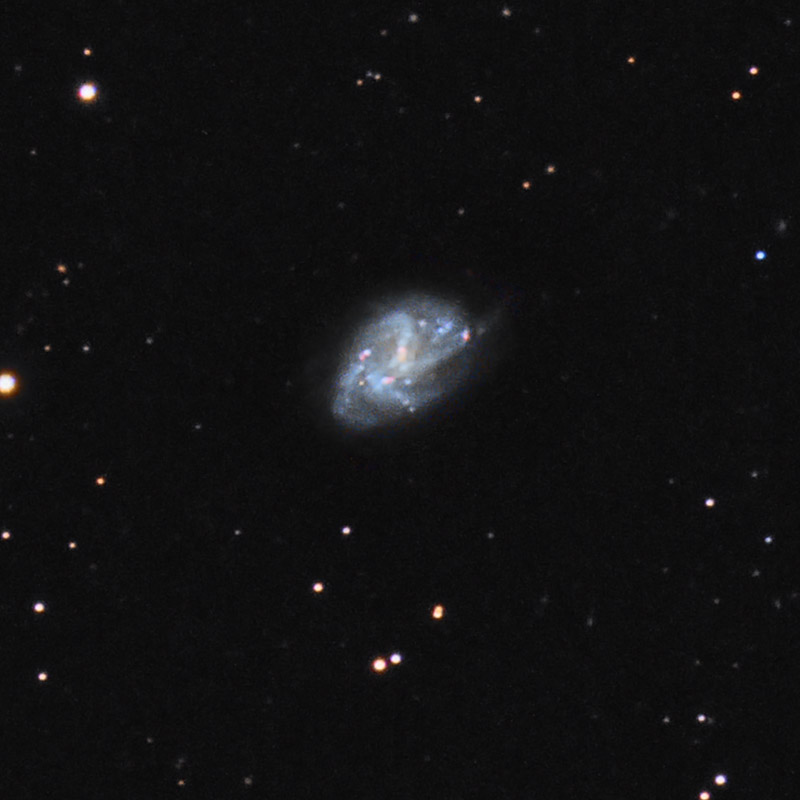 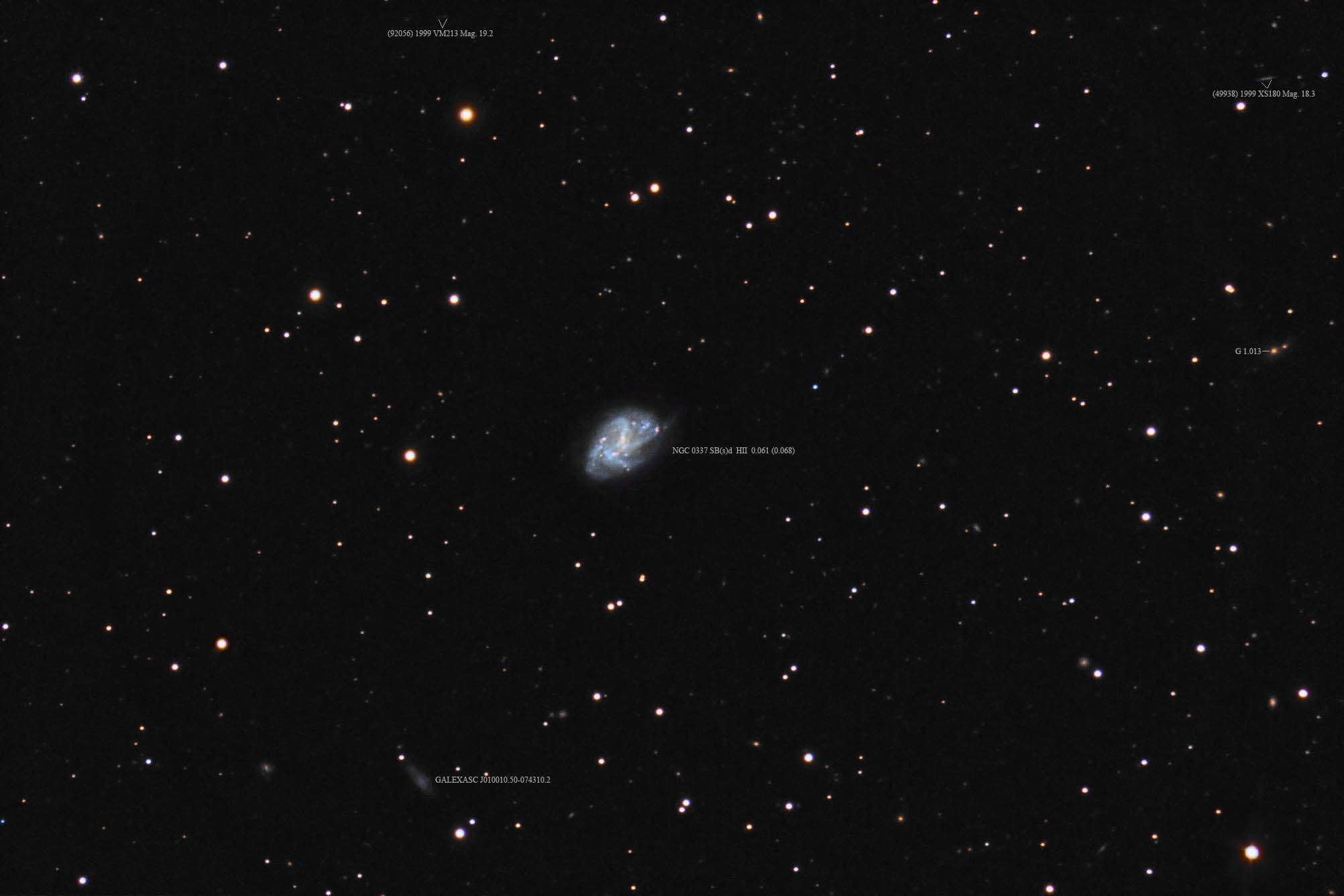 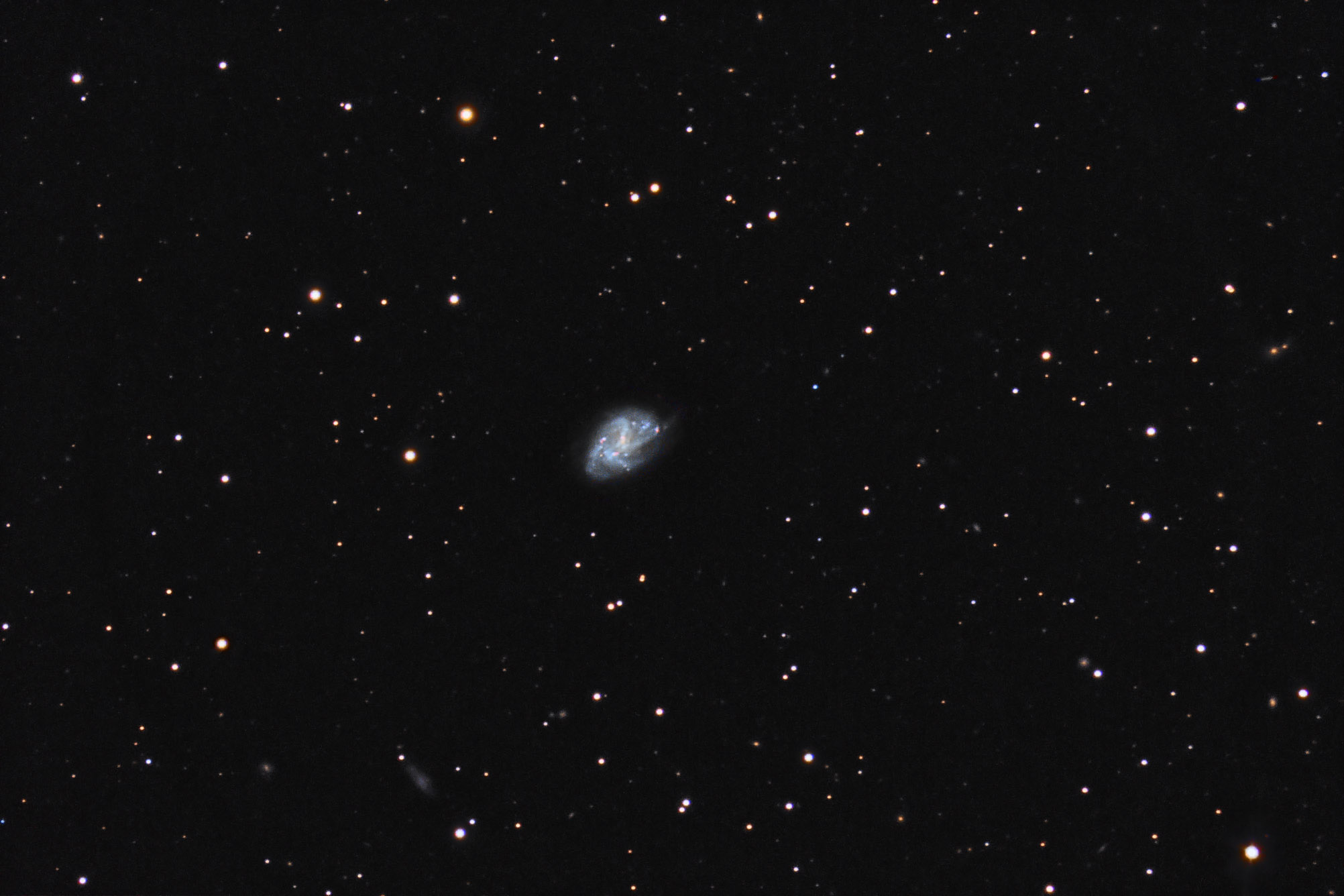