NGC 0366 is a small, type II3p open cluster in the center of Cassiopeia. WEBDA puts it at 5,800 light-years distant with an age of 25.7 million years. The only paper I found on this http://adsabs.harvard.edu/full/1994BASI...22..369P puts it at 7,000 light-years distant and gives an age of 25 million years. WEBDA says it is reddened by 1.256 magnitudes while the paper says the reddening varies across the cluster from 1.1 to 1.4 magnitudes. Indicating dust and gas density between us and the cluster varies quite a bit. The paper concludes it has a higher percentage of low mass stars compared to other clusters of its age.

The cluster was discovered by John Herschel on October 27, 1829. Dreyer describes it as \"a cluster, small.\" To its south, just out of my frame, unfortunately, is NGC 358. It is apparently just an asterism of 4 stars so I didn\'t miss much.

But what I didn\'t miss is a nebula not found in any catalog I checked and I checked quite a few. It is located in the lower right corner of my image. It is a blue reflection nebula near a moderately bright star. The star seems unlikely as the light source as it is rather cool for such an illuminating star. I\'ve made some inquiries but so far not heard anything. It does show very faintly on the blue POSS II plate and I found it in one amateur image. Again so faint the amateur didn\'t notice it. I saw it on the first frame that came in and thought it a reflection. I almost stopped the series but when I saw it on the POSS-II plate let it run to completion. It\'s coordinates at 01 04 13.59 +62 06 01.07. Since I first wrote this I\'ve learned it really is unknown and no one cares. Reflection nebula like this are all over the sky and aren\'t dynamic objects like say a planetary nebula so aren\'t normally cataloged unless they have something that attracts researchers. This one doesn\'t. So it is destined to always be unknown. I did find it one one other amateur image, much fainter than on mine. Apparently he didn\'t notice it or feel it worth mentioning.

For some reason, I took only 1 red image. My series shows two were to be taken but only one showed up when I went to process it. Apparently, the system decided the rising moon would bother and didn\'t even try. It isn\'t supposed to do that. It is to continue anyway and if it must stop retake the frame the next usable night. We\'ve had a couple but it didn\'t reschedule it. The image color seems reasonable so I\'ll ignore the missing frame. 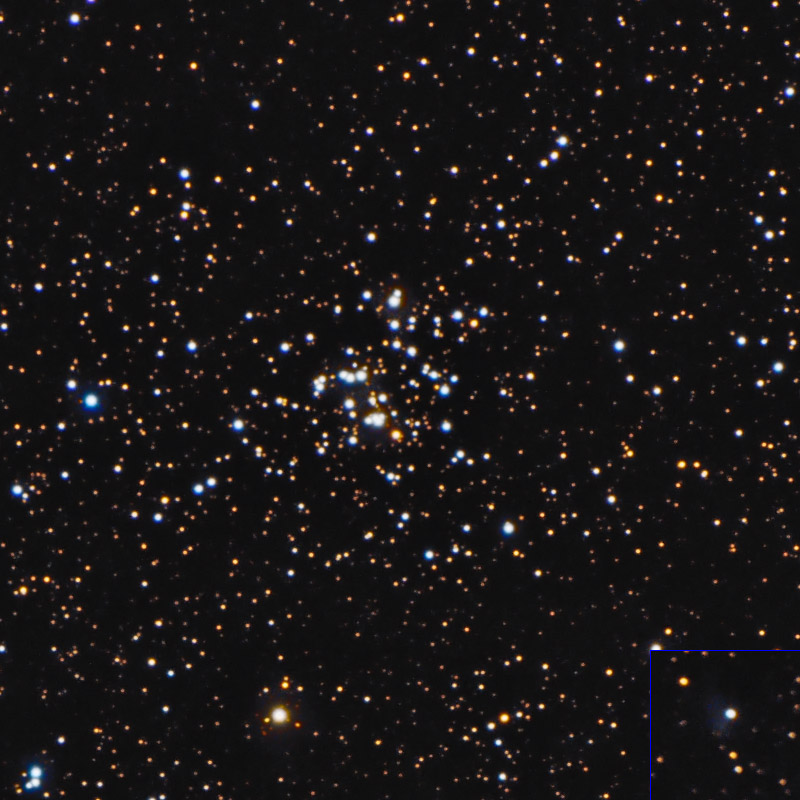