NGC 428 is one odd looking galaxy in Cetus. Redshift puts it 38 million light-years away. Unfortunately, the error bar of redshift is at least this great meaning it could be twice as distant. In fact, Tully-Fisher measurements put it between 45 and 54 million light-years distant. The longer estimate may be the more accurate. It is classed as SAB(s)m with HII emission. Galaxies of the Magellan class tend to look rather messed up. Are they naturally this way is the question. I see one note at NED that says; \"Two bar-like bright regions suggest that an interaction may be occurring, and one of the bars has more bright knots than the other. The galaxy is not detected at radio wavelengths by NH.\" Usually, if there\'s interaction involved you\'d expect rather high radio activity. If it is 50 million light-years distant it would be about 60,000 light-years across. If the redshift distance of is right then it is about 45,000 light-years across.

North of NGC 428 is the dwarf irregular galaxy LEDA 135629. It appears as a blue smudge. Was it torn apart by NGC 428? They have a similar redshift. But the galaxy looks rather typical of its type so I doubt any interaction. Still, they make an interesting pair. NGC 428 was discovered by William Herschel on December 20, 1786 but isn\'t in either H400 program.

SDSS J011310.00+005012.3, bottom center, has two very different redshifts given at NED. One puts it at about the same distance as NGC 428 while the other puts it nearly 400 million light-years further away. While it does seem to have a low surface brightness like others in the NGC 428 group I doubt the redshift measurement that puts it at the distance of NGC 428 can be right. NED also prefers the further distance.

As usual, the annotated image shows the light travel time distance to all objects in the field that NED had the needed data. Labels are immediately right of the object unless a line is drawn to the object. Also, I included catalog names for objects likely part of the same group as NGC 428 as well as galaxy clusters. Interestingly, all galaxies in the vicinity of NGC 428 are dwarf irregular galaxies of very low surface brightness. While far larger NGC 428 is considered a low surface brightness galaxy that has little regular structure same as its traveling companions. There were quite a few noted quasars and UvES objects (likely quasars) in the field which are noted by a Q or the UvES label and their light travel time distance. 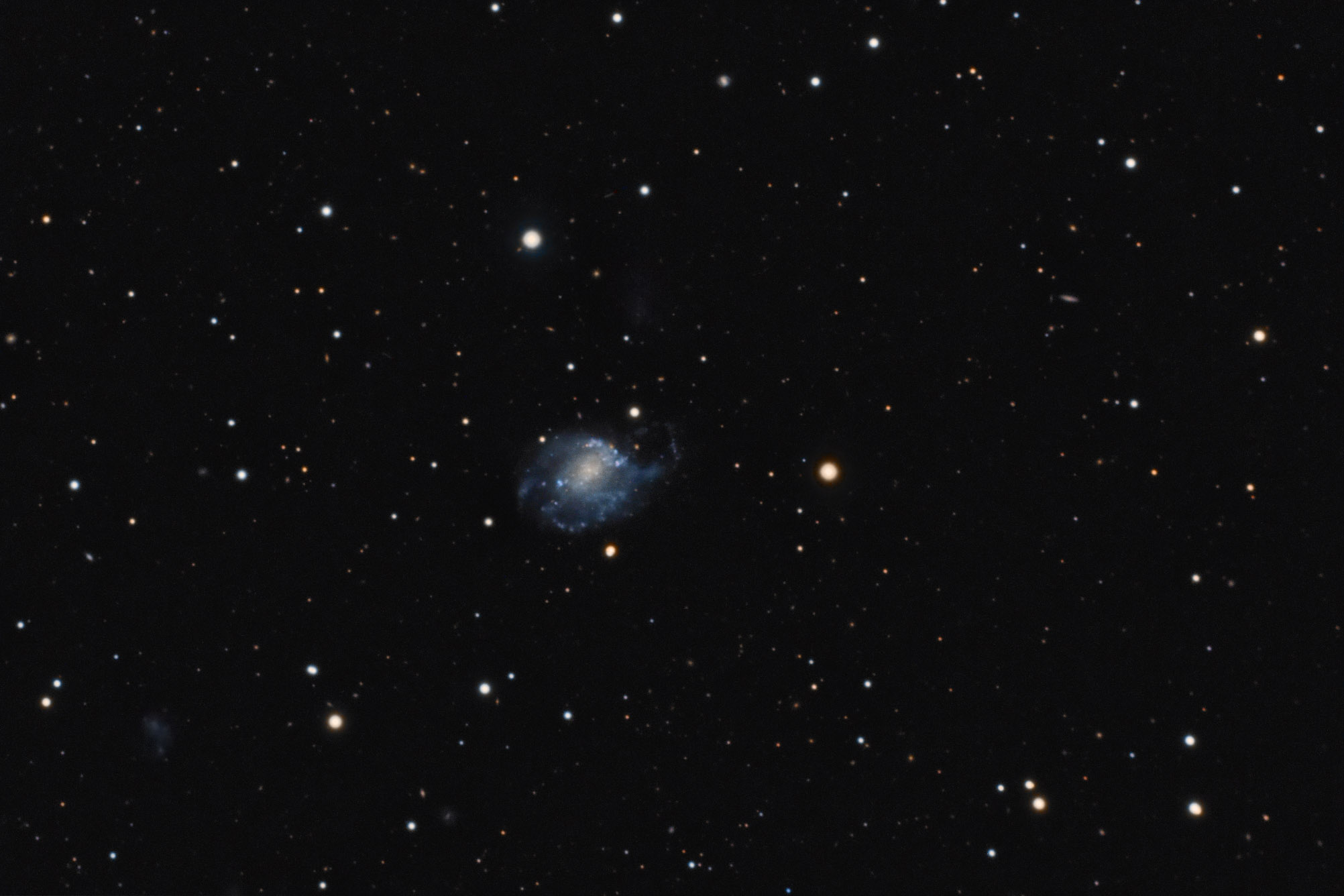 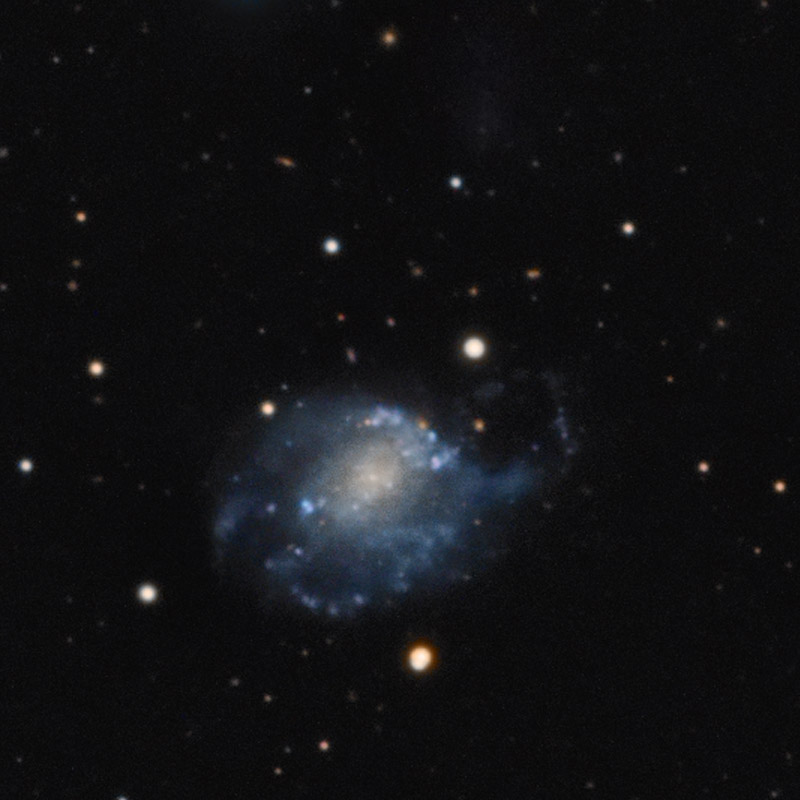 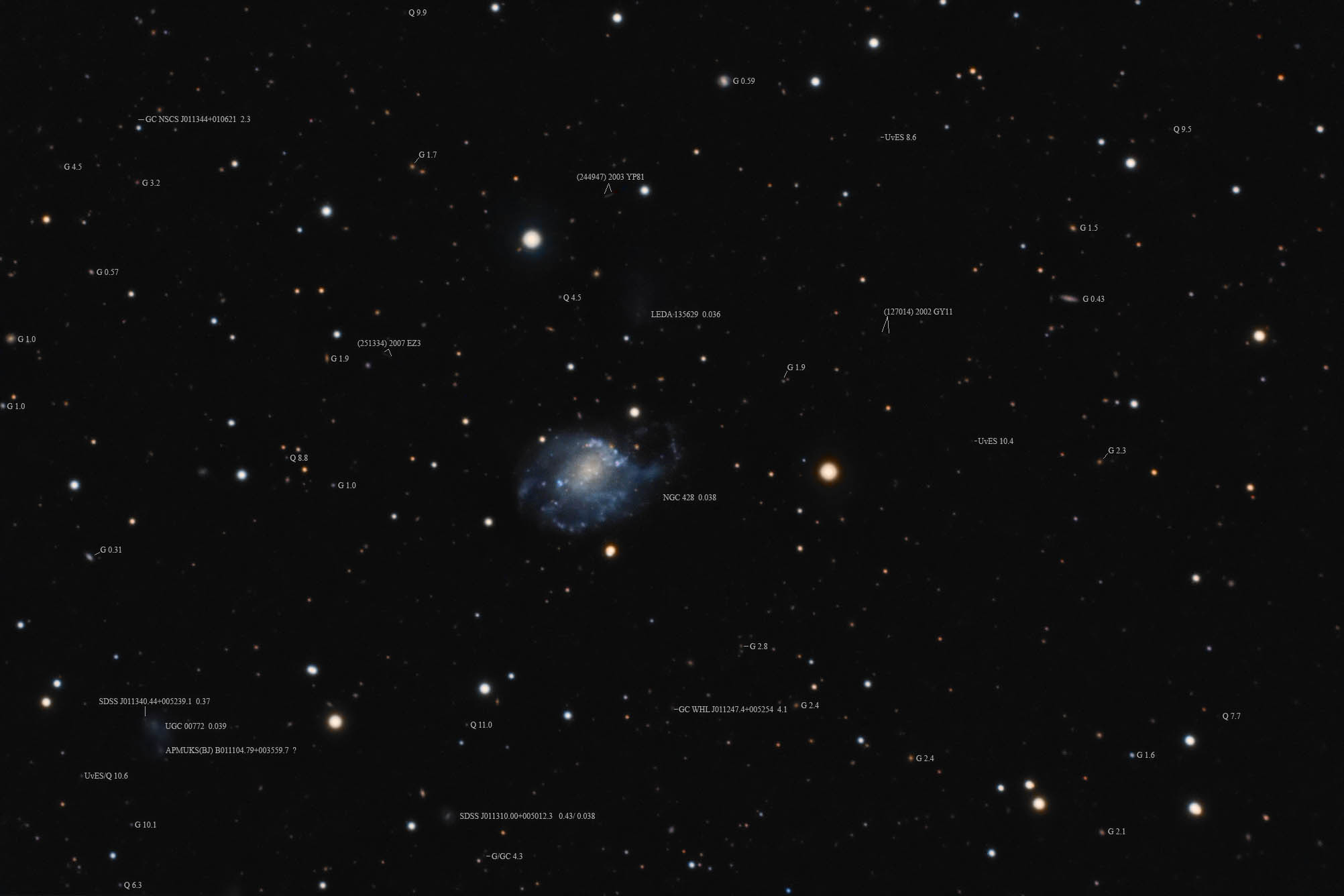