My target for this image was NGC 615 on the far left in central Cetus. I moved it left when I saw NGC 600, a rather interesting low surface brightness barred spiral could be fit into the frame. The core and bar of it are quite bright but the arm structure rather faint without much fine detail but for all the star clouds on the faint arm to the south that seems pulled away from the rest of the galaxy.

NGC 615 has a strange dust lane that cuts right across the inner spiral structure. This makes it rather similar to NGC 210 I posted back on September 28, 2010. In the case of NGC 615, the dust lane is far more obvious, however, but doesn\'t make an \"X\". NGC 615 is seen more edge on which might make the dust more obvious.

NGC 600 was discovered by William Herschel on September 10, 1785 but isn\'t on either Herschel 400 observing list. NGC 615 was also discovered by William Herschel. He found it on January 10, 1785, 8 months before finding nearby but fainter NGC 600. NGC 615 is on the original Herschel 400 observing list. My notes from a fair but humid night using my 10\" f/5 reads: \"Very small, faint round galaxy. Seems to have a starlike nucleus surrounded by a bright ring located half way to the edge of the halo. Very interesting but hard to see due to the small size and need for averted vision.\" Odd I said round when it is very oval. Seems I wasn\'t seeing but the red portions of the galaxy and missed the faint outer blue arms entirely. I needed 150x to see it very well the notes indicate. I made no mention of NGC 600 so like Herschel likely missed it at the time.

Both galaxies have a redshift that puts them about 70 million light-years distant and thus likely part of the same local group. Their size is similar at about 71,000 light-years in diameter. If they are at about the same distance then their separation is only about 620,000 light-years making them much closer to each other than we are to M31.

The field isn\'t well documented in NED. The only other galaxy in the field to have a redshift is the dwarf galaxy KDG 007. While its redshift is almost the same as NGC 615 indicating it may be a satellite of it the only non-redshift measurement puts it much closer. I can\'t follow the reasoning used for this however as it assumes this dwarf is a member of the NGC 1313 galaxy group. Now that group is nearly two hours east and almost 60 degrees south of the dwarf! Again that famous Asian astronomer Sum Ting Wong may have struck again. But since NED includes that reference I included it.

6th magnitude HD 9562 was moved out of the field at the top. Even so, it cast a huge blaze of light into the frame that was a pain to deal with. Fortunately, this is a rather sparse field for faint distant galaxies so I doubt it cost much detail to deal with it. 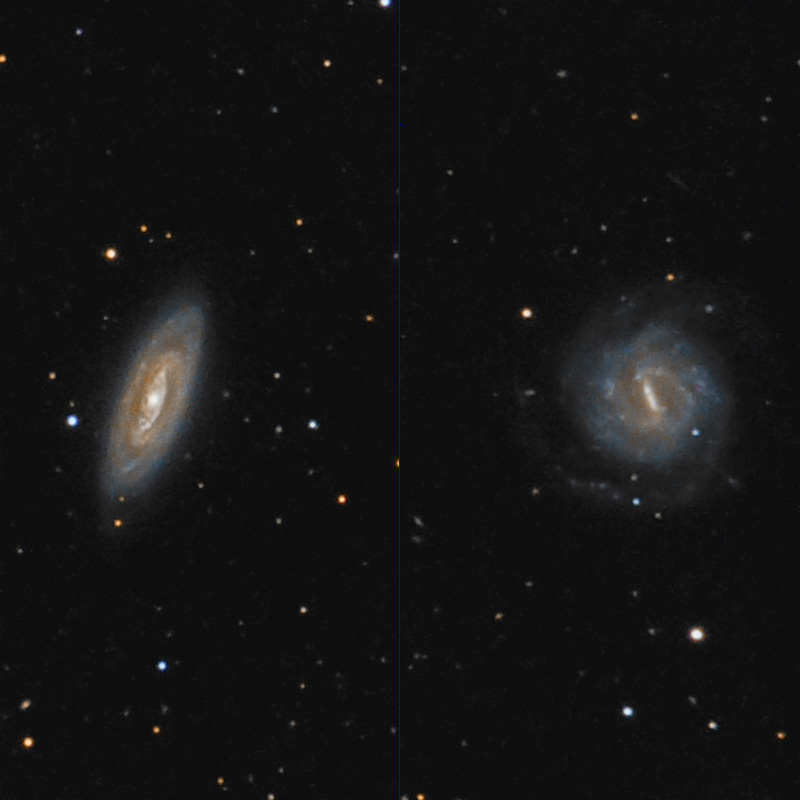 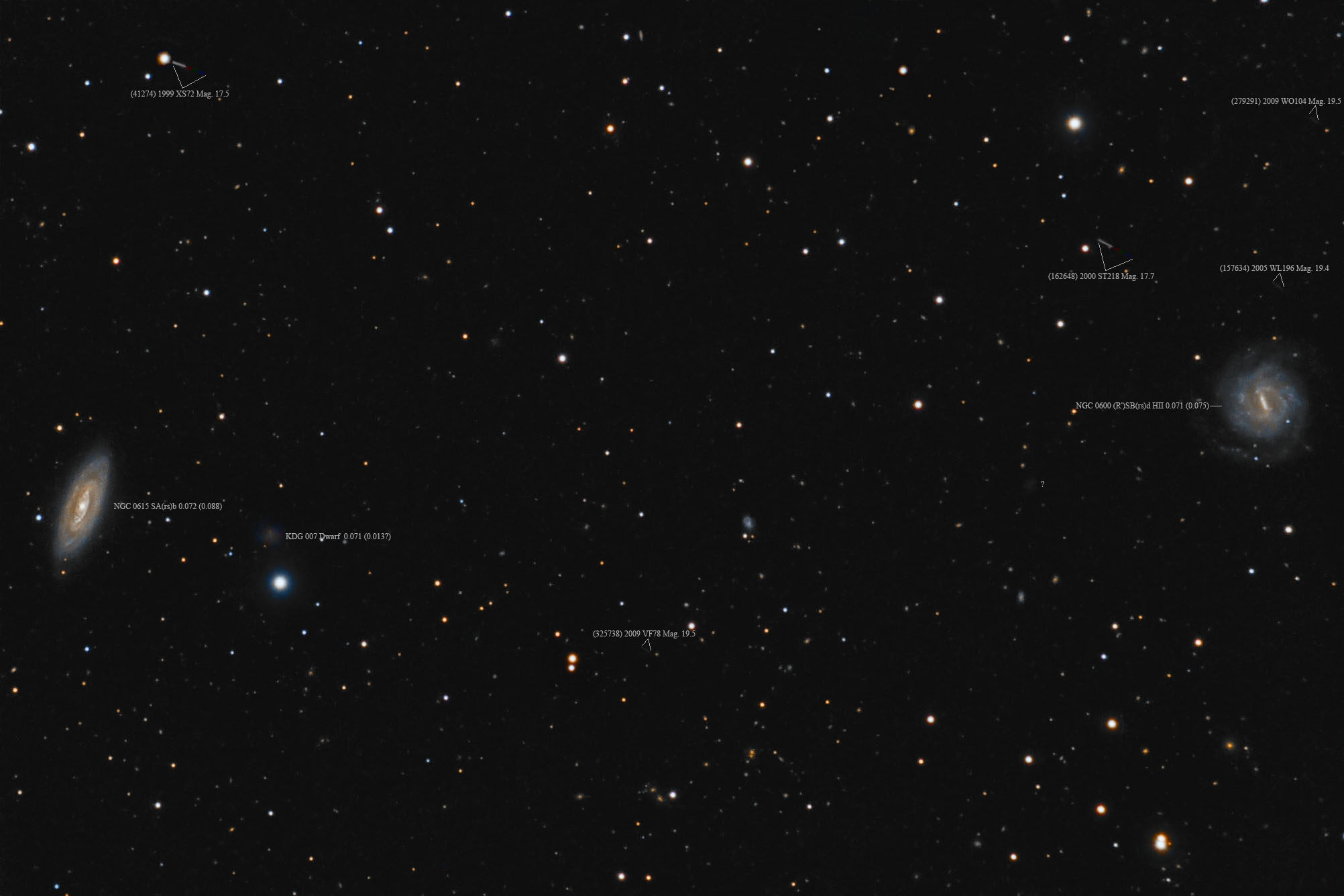 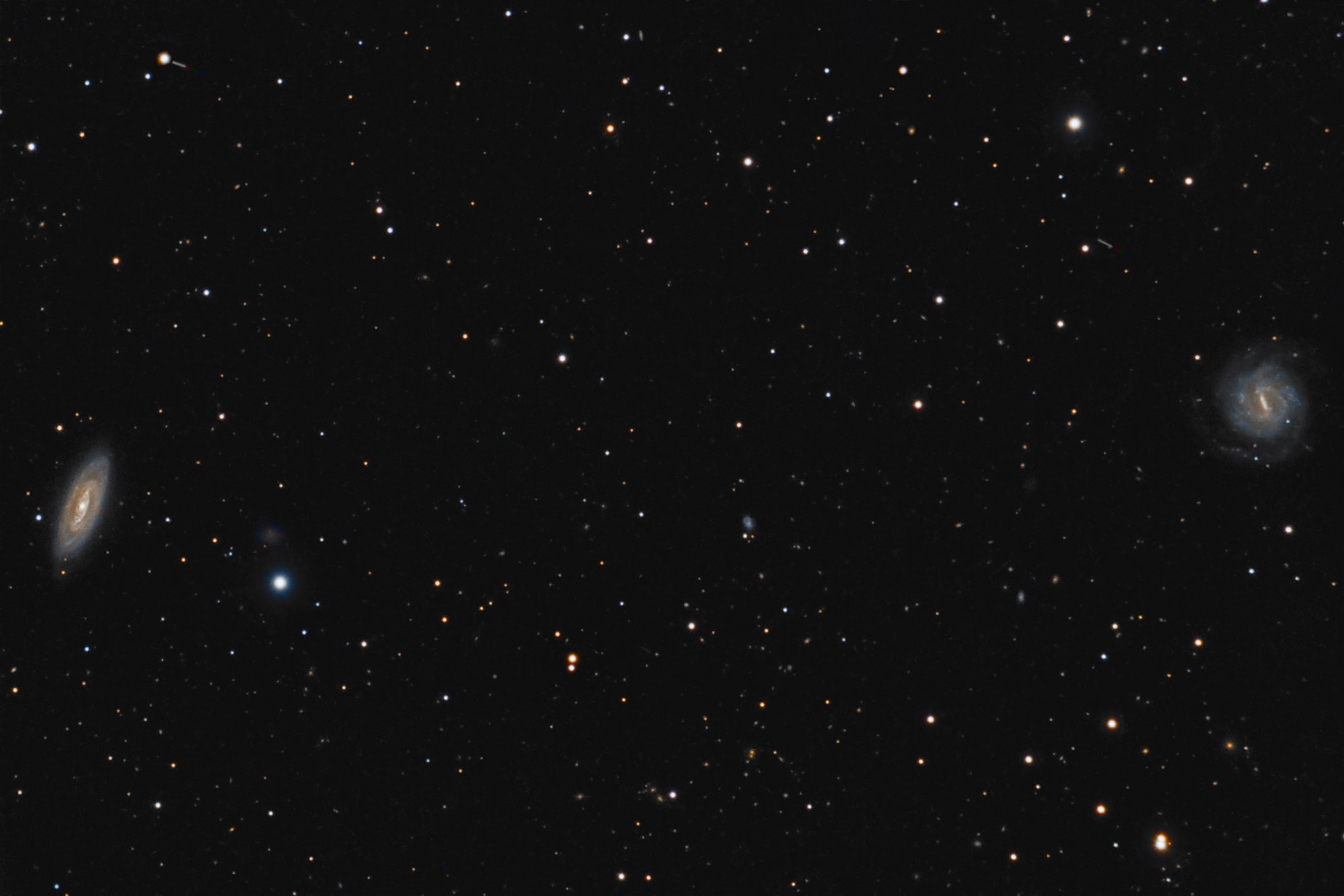