NGC 697/674 is a spiral galaxy in northwestern Ares about 130 million light-years distant by redshift and 110 by the consensus of 17 non-redshift measurements at NED. It is considered a member of the NGC 691 galaxy group which average about the same redshift as that of this galaxy. Still, it is hard to argue with a rather nicely grouped non-redshift measurements that have a standard deviation of only 9 million light-years. So I\'ll split the difference and say 120 million light-years. That makes its size nearly 200,000 light-years including faint plumes my horrid night barely showed. Unfortunately, they don\'t show in the color image. Using the size seen in the posted image it is still very large at a bit under 160,0000 light-years across. So this is a major galaxy. While I\'ve not yet taken NGC 691 its angular size in catalogs is smaller than NGC 697-74. NGC 697 is classified as SAB(r)c: by NED and the NGC Project and Seligman. It\'s unusual when those three agree though Seligman uses a question mark for a colon they two mean essentially the same, a bit of doubt in the classification as a c arm structure galaxy. Not surprising given the oblique angle we see it at. For a hint of the plume, especially on the east side see http://cseligman.com/text/atlas/ngc674wide.jpg.

So why two NGC listings. Seems William Herschel discovered it on September 15, 1784, got its position correct and earned the NGC 697 entry from Dreyer when he assembled what became the NGC catalog. Then on December 2, 1861, yes, over 77 years later Henrich d\'Arrest recorded a galaxy 2 minutes of arc west of NGC 697 which he claimed to have viewed the same night. But there\'s nothing he could have seen at that position. Also, his description is a perfect match, including the position of a 9th magnitude star in relation to the galaxy, for NGC 697. Thus the two are now considered one and the same by nearly all catalogs. You can read a bit more on this mix-up at the NGC Project webpage for either NGC 697 or NGC 674. While Herschel discovered it the galaxy isn\'t in either of the H400 observing programs.

The night I took this image had awful seeing and even worse transparency due to a nasty haze layer. Sometimes these stabilize seeing but not this night. The 6th magnitude star in the lower left corner SAO 74966, a double star whose combined light is that of a G3III star so virtually white with a tinge of red, gave me fits sending a bright gradient completely across the frame. Combined with the loss due to lousy transparency this image is about 2 magnitudes short of my normal efforts with an FWHM of 4\" rather than the 2.5\" I often obtain for stars. Thus much detail in the galaxy was lost. Taken in late January 2017 it was my last January or February image. It is now well into March with a bright moon as I write this with still no imaging. Worst winter I\'ve ever had for imaging. 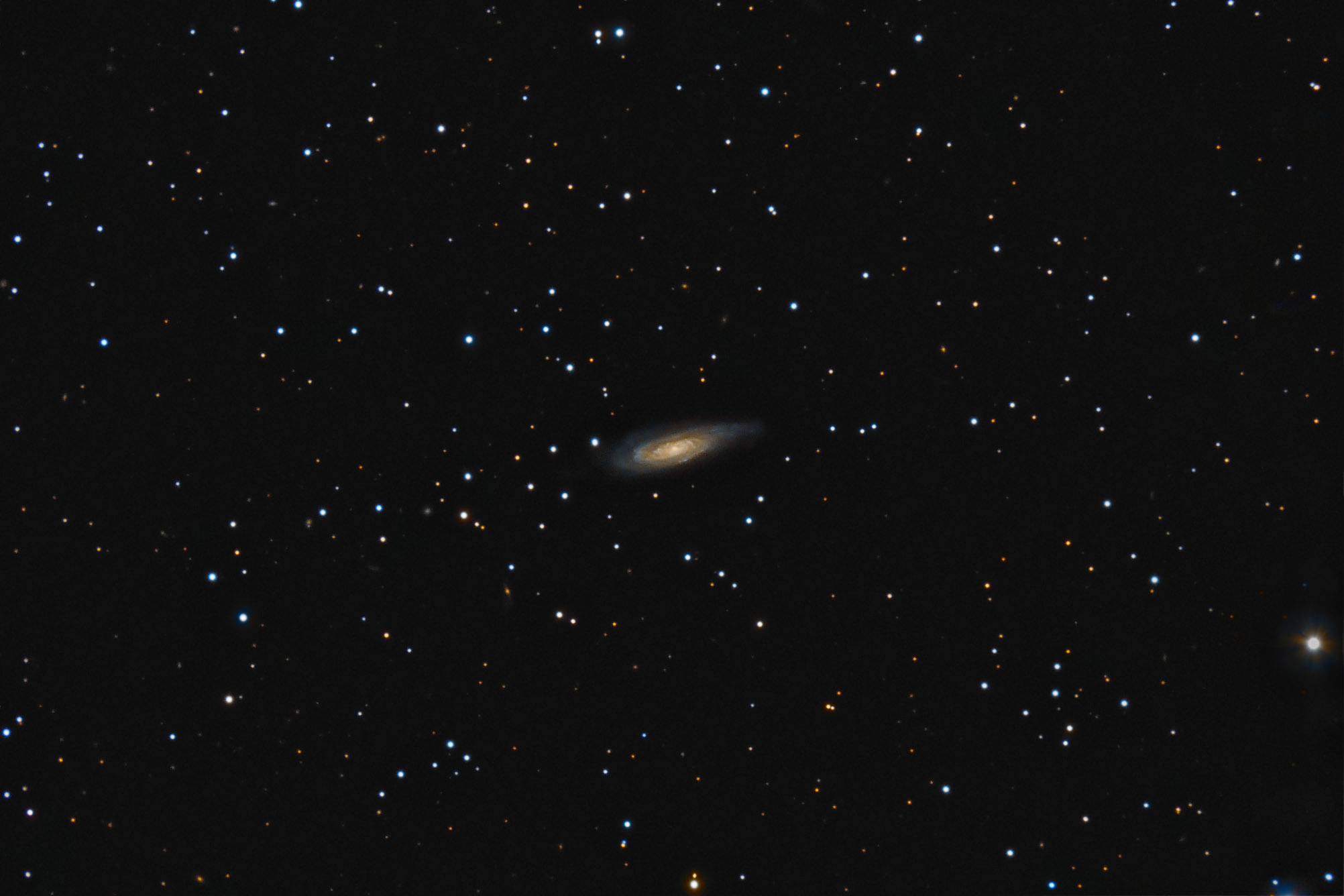