NGC 753 is a nice three-armed spiral that is a member of the Abell 262 galaxy cluster. While the cluster has a radius of about 1.75 degrees and NGC 753+ is over a degree from the center of the cluster several papers describe it as being; \"Relatively close to the centre of the A262 cluster.\" I don\'t see how that quite matches my idea of \"relatively close\". In any case, Arp had a classification for three armed spirals in his atlas. This one didn\'t make the atlas but seems a better example of this feature than some he did include. It has one major arm above the core and two fainter less defined arms below. The upper arm also would seem to fit his category for spirals with one heavy arm at least as well as M101 does that he did include. The inner portion of the arms seems to form somewhat hexagonal ring rather than being a smooth spiral. Makes it look rather kinked. NED classifies it as SAB(rs)bc, the NGC Project says Sc and Seligman says SBbc. Take your pick. The galaxy is 210 million light-years distant by redshift. A bit closer by Tully-Fisher measurements The galaxy was discovered by Heinrich d\'Arrest on September 16, 1865.

As if NGC 753 possibly qualifying for Arp\'s atlas of peculiar galaxies under two different categories wasn\'t enough to get me to image the field it contains two other galaxies I had on my list. So I was able to catch 3 different targets in one frame. The galaxy I was actually more interested in is V Zw 156. A strange red and dead disk galaxy with a faint outer blue ring. I really needed more time to catch this faint feature but I was again fighting conditions and never again did this object have sufficient seeing when within my limited imaging window of 2 hours either side of the meridian at its elevation so this never happened and I had to go with what data I was able to catch. Also, while it was the one I was most interested in due to its odd ring it is the one with the least information available. I couldn\'t even find a distance estimate but suspect it lies far beyond the Abell 262 cluster, unlike the other two galaxies I was after.

The third object is a flat galaxy, FGC 218, an Sc galaxy seen edge on. Redshift puts it 240 million light-years distant with Tully-Fisher measurements saying it is a bit further. It too is a member of the Abell cluster as are the other two galaxies in the image with redshift data. They are on the western side of the image which puts them closer to the center of the cluster. CGCG 522-082 is hiding behind a red and blue star-making is spiral structure hard to see. NED apparently has no better view than I do listing it simply as Spiral. One Tully-Fisher study of the galaxy came up with 4 different distances depending on how various factors were considered. So while redshift shows it at 290 million light-years, a reasonable value for a cluster member, the 4 T-F estimates from the same data set give a range of 71 to 280 million light-years. That\'s quite a range! CGCG 522-083 is the other cluster member that can be identified in this frame. It is 210 million light-years distant by redshift and classified as Sa. No non redshift distance were available. There may be others but without redshift data there\'s no way to know.

This field is located in southern Andromeda near the border with Triangulum. My post of the core region of Abell 262 was posted back on December 13, 2011 under its other name \"The Fath\".

This is my first November image. Conditions were no better than in October unfortunately. 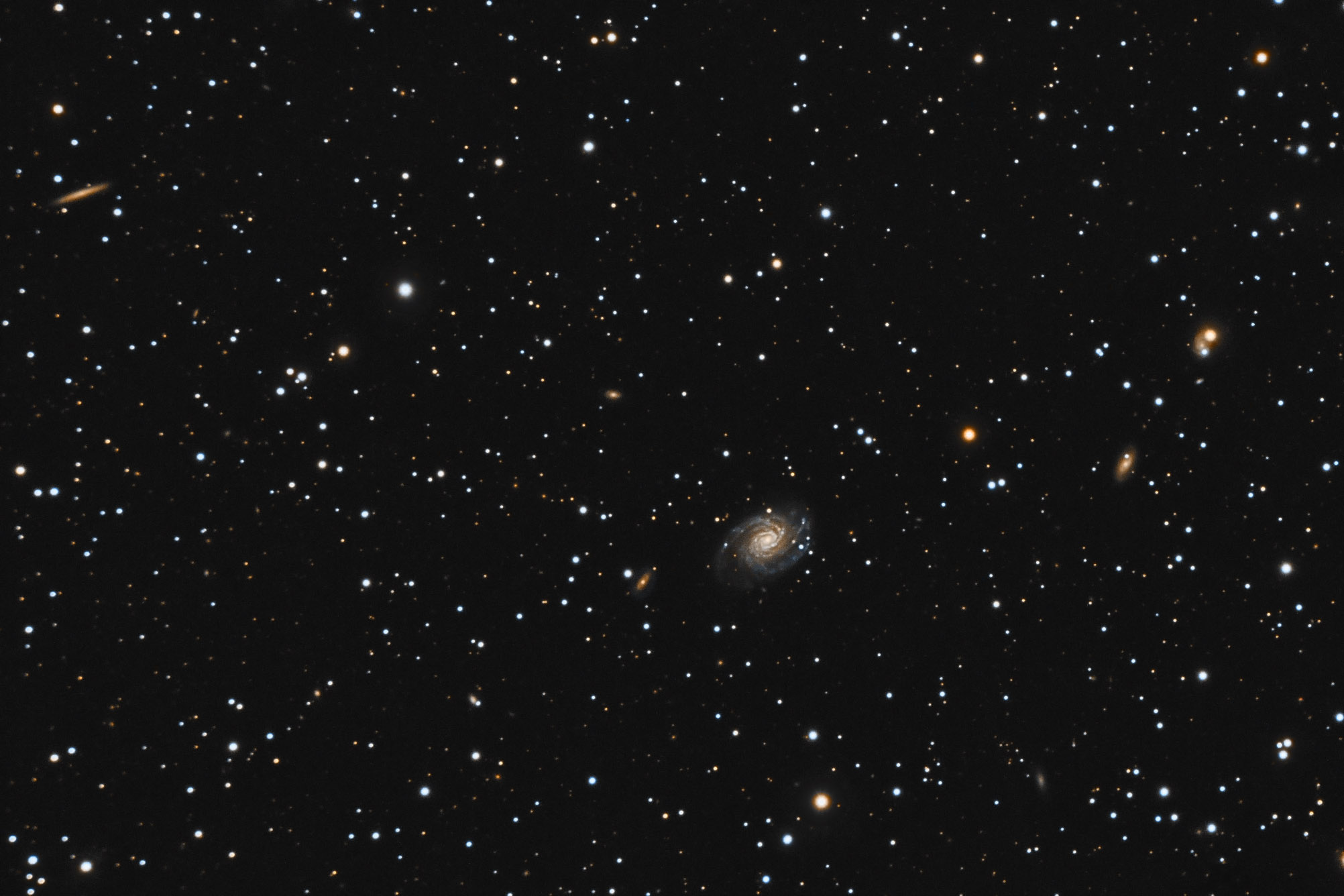 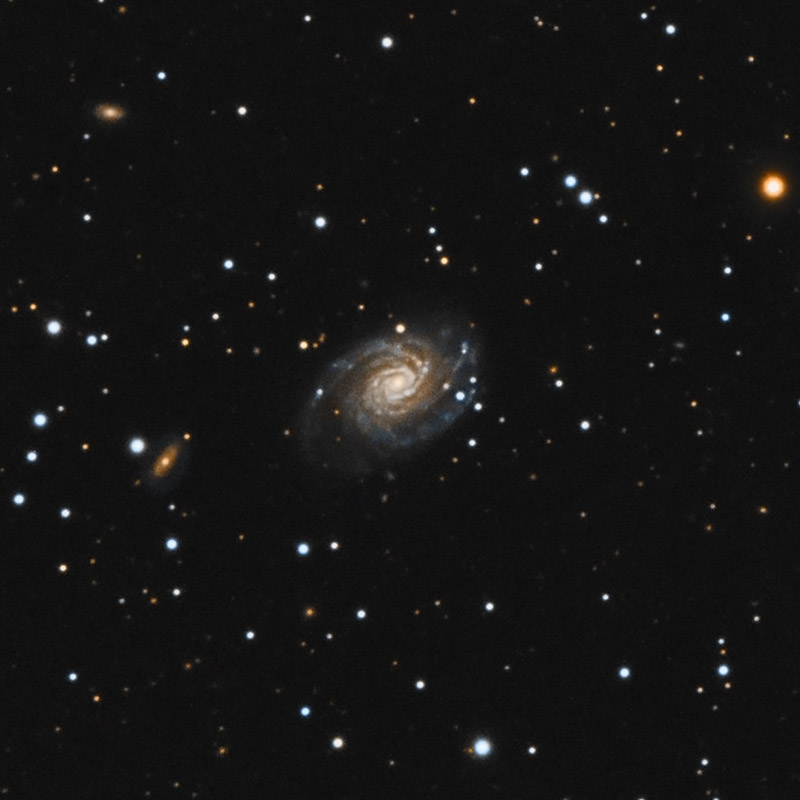 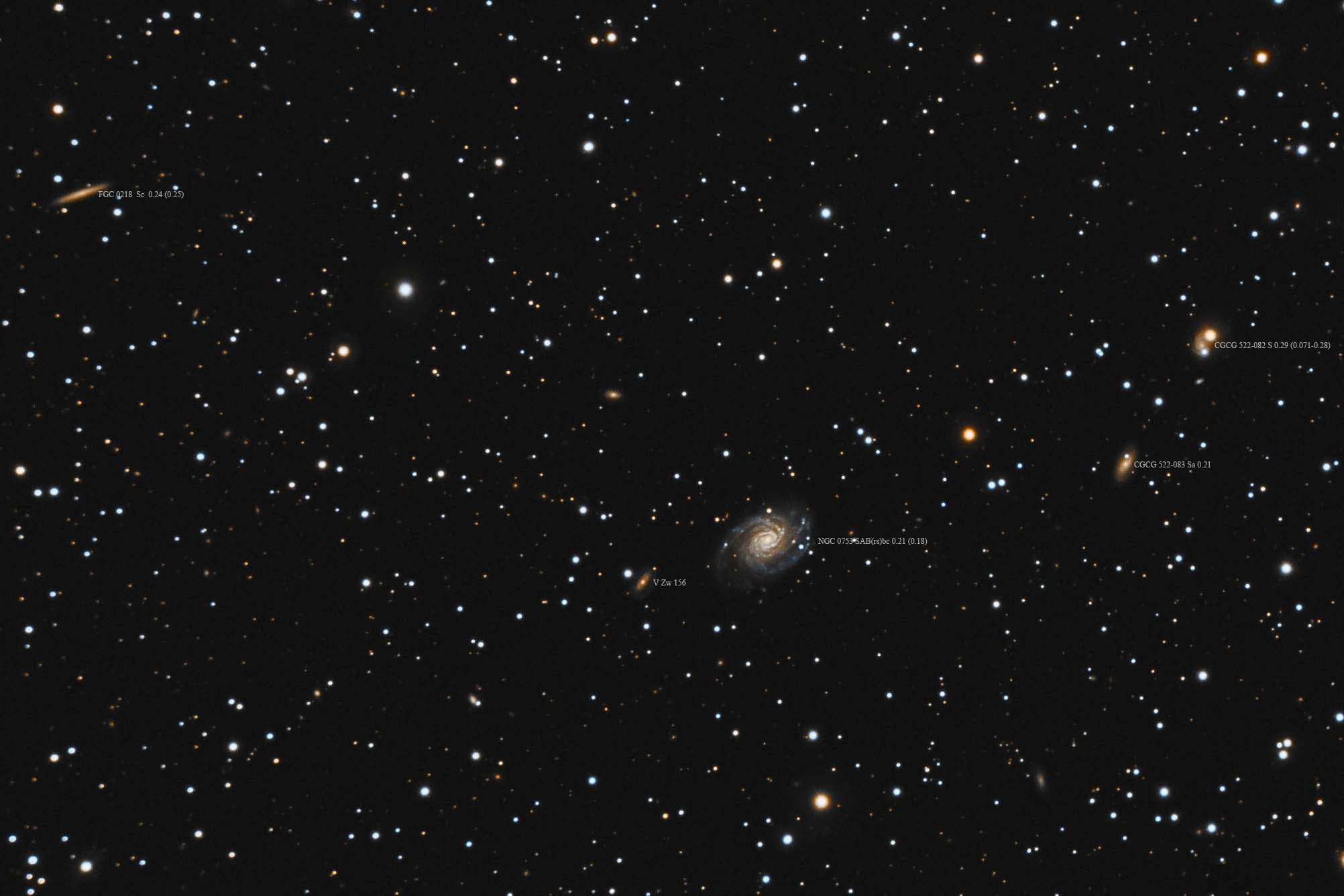