NGC 828 is a very beautiful galaxy that I\'d have expected to be very well known but is virtually unheard of. I can\'t find any professional images of it and only a half dozen amateur images. It is a highly disturbed spiral with a huge dust lane. Most sources attribute these features to it being a merger in progress using several different lines of reasoning. It is classified as Sa: pec and has a LINER core with strong HII from the core as well. Radio shows two peaks 4\" apart in the core which could be the massive black holes of the two galaxies one of which is off center. The galaxy is about 230 million light-years distant both by redshift and the median value of non-redshift determinations. That distance would make it some 150,000 light-years across including the plumes. Prior to the interaction, I would assume it was far smaller but it is hard to understand what it might have been like prior to the merger. My wild guess puts it at about 55,000 light-years before the collision. While NED doesn\'t list it as being a starburst galaxy one paper I found does.

The galaxy was discovered by William Herschel on October 18, 1786. It isn\'t in either of the two Herschel 400 observing programs.

I put NGC 828 well to the west of center and down to also pick up another strange galaxy, VI Zw183. The CGPG says of it: \"Pair of large Sa [m(pg) = 14.6 [CGCG] with blue disk and halo. Plus blue spherical compact companion 13 arcsec west.\" What I see is a red S0/a disk galaxy with blue wings. Apparently, this is really two galaxies, one a red disk seen face on and a faint blue galaxy directly behind it such that only the ansae show as \"wings\" to the red disk galaxy. The blue compact doesn\'t begin to look blue in my image. NED had no redshift for it so I can\'t say if it is related or not to the red disk galaxy. While NED has a redshift for the larger galaxy I can\'t tell if it applies only to the red disk galaxy or both. I\'ll assume this is only the red galaxy as there\'s little to go on for the blue tilted galaxy behind it. How far behind I don\'t know. I was unable to find any high-resolution image of this one or three I should say.

Located in southeastern Andromeda it is in the zone of avoidance so the area is little studied for galaxies. This meant only these two galaxies and one other had redshift information. The pair of blue stars at the bottom of the image gave me processing fits. While 6.82 and 6.09 magnitude and A1V and B9v their combined light and double halo were nasty to deal with. Apparently, they are only a line of sight pair as Hipparcos puts them at 1700 and 260 light-years distant respectively. 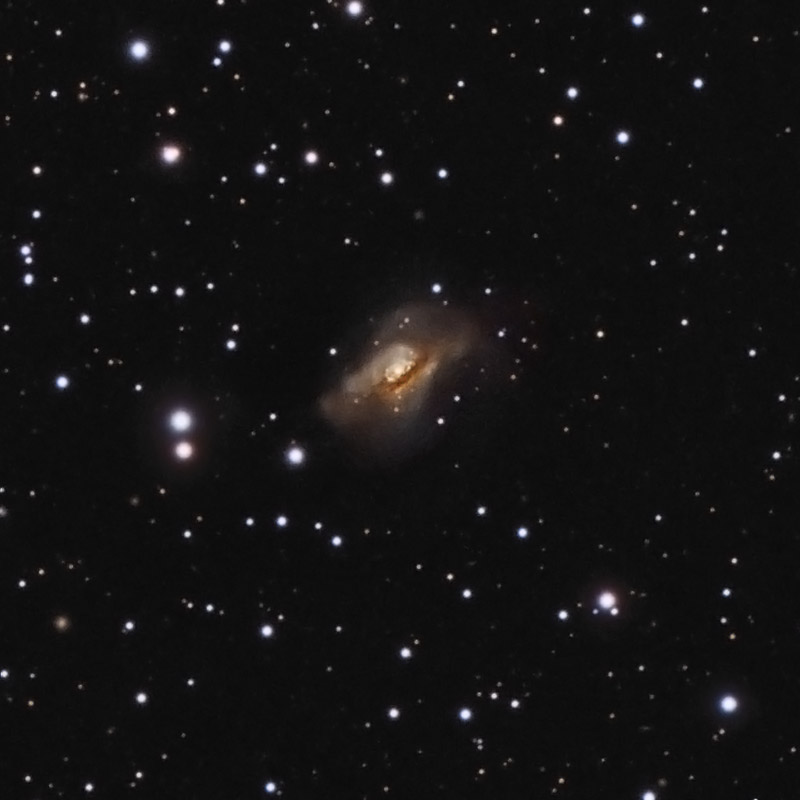 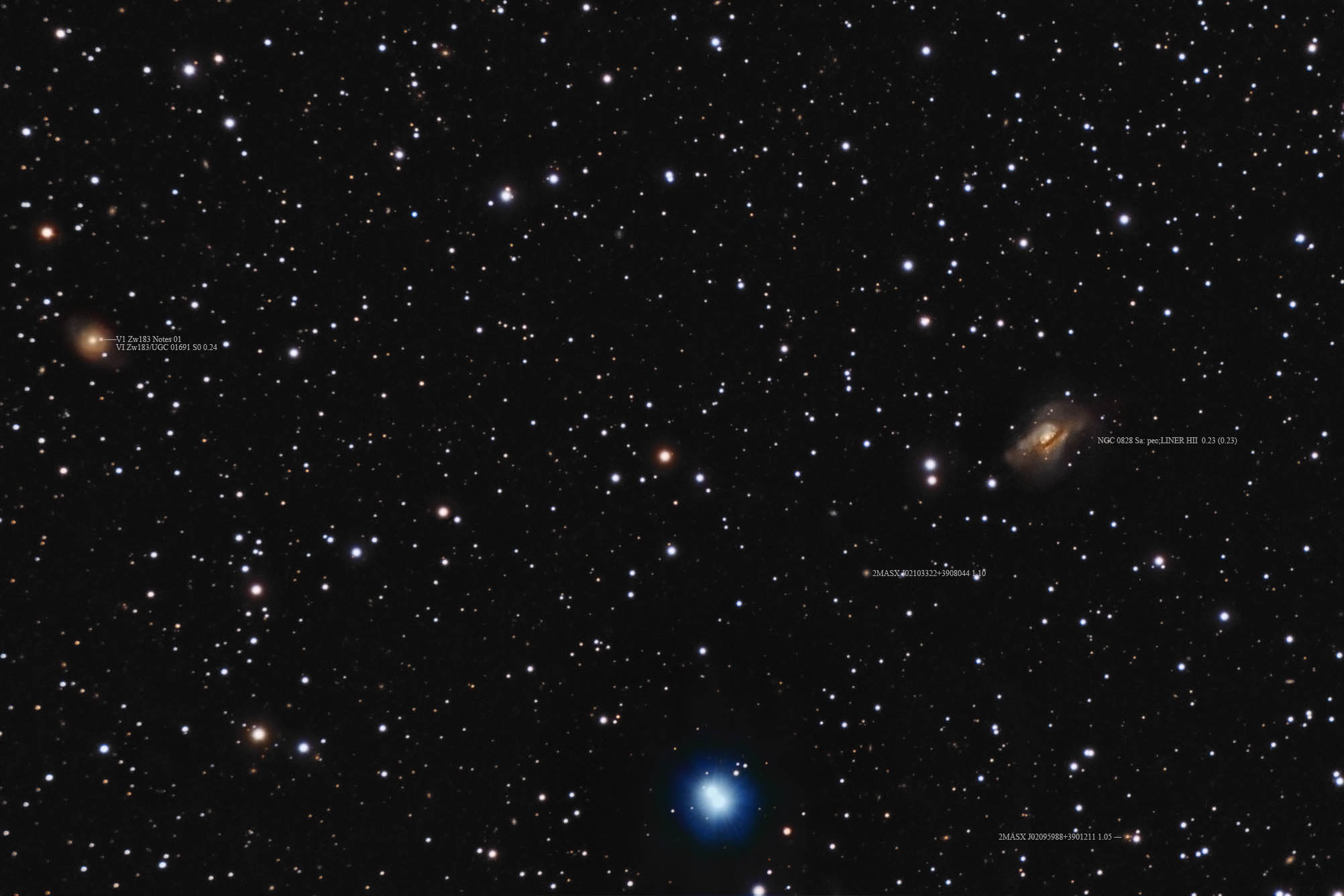 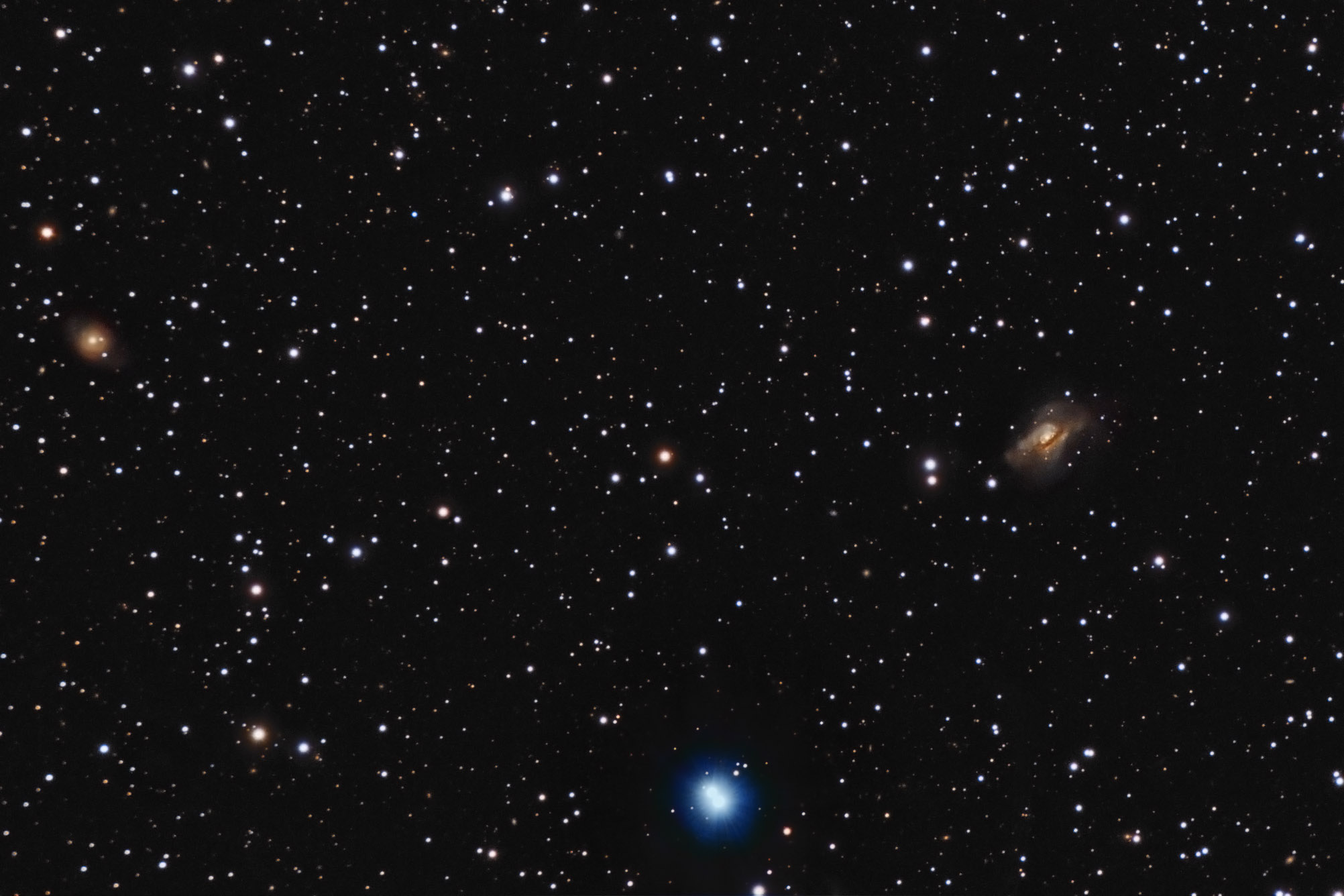