NGC 918 is a SAB(rs)c: galaxy in Ares about 60 million light-years distant. It is seen through a lot of dust reducing its brightness by about a magnitude in visual light, more in blue and less in red light which gives it a rather reddish hue. The galaxy hosed SN2009js 5 years ago. There\'s little known about this galaxy as it is located in the Zone of Avoidance where most galactic studies fear to tread. The southern half seems crossed by parallel bands of stars that are quite evenly spaced. Is this real or caused by dust in our galaxy obscuring it in bands. The POSS 2 IR image shows no hint of these bands which could indicate dust is to blame but if they are made up of hot blue stars then they\'d not be seen in IR. The dust we do see in the image is far too diffuse to have created such a fine structure as these bands so I vote for the bands being real but what causes them. Some galaxies obviously interacting with a companion sometimes show bands much like these. M51 would be an example. But this is a very lonely galaxy. It has no companions. NGC 918 was discovered by John Herschel on January 11, 1831.

I tried to put a lot of time into this one but I ran into an equipment failure, the 35 year old home built power supply I used to power the dew heater died and I didn\'t know it. I tried to take 2 hours of luminance and 1 hour for each color to bring out the foreground nebulosity over three nights. These were done after midnight while I was sleeping. I had no idea the power supply had died until a couple days later. The dew shield was sufficient in the early evening when I was around to see how it was doing but I\'d get up in the morning and \"clouds\" had ruined the rest of the night. Finally a couple nights later dew was so bad it happened while I was up and the cloud sensor said it was very clear yet I was getting \"clouded out\". I trudged to the observatory muttering things not suitable for this post and found the fogged corrector and dead power supply. I unplugged it (no switch) that somehow blew the fuse for the isolation transformer that powers everything. Now you really don\'t want to know what I was screaming rather than muttering. Of course, it takes a micro fuse I didn\'t have nor does anyone local. By the time I was up and running again I never was able to reshoot this object. I had to pull the boat early from the lake and use its battery plus trickle charger to run until I got a new power supply and run without the isolation transformer which isolates me from some nasty power issues deep in the north woods.

The result was of the three nights of luminance data the first night had great seeing but hit by dew. The color data was useless. Second night seeing was poor but dew issue light so both luminance and color were usable. The third night was dewed out completely.

The field was full of asteroids. If not for them I\'d not do an annotated image as only NGC 918 had redshift data at NED. But combining two nights of luminance data turned up 12 different asteroids with 13 asteroid annotations on the image. How 12 became 13 is that one and only one was in the frames of both nights, (117336) 2004 XP15. Only one has a name (9682) Gravesande. Its naming citation reads: \"Willem J. \'s Gravesande (1688-1742) was a professor of mathematics, astronomy and philosophy at Leiden University. During his life, he wrote many textbooks on mathematics and philosophy, and he is also important as an exponent of Newton\'s philosophy in Europe. The name was suggested by W. A. Fröger.\" The \'s is not a misprint that is his part of his sir name, \'s Gravesande. The J is for Jacob in case you were wondering. The asteroids in the first night\'s frames have no color data. The brightest on the second night do. This is why some brighter ones have color trails and some don\'t.

This is yet another for the redo list on a better night. 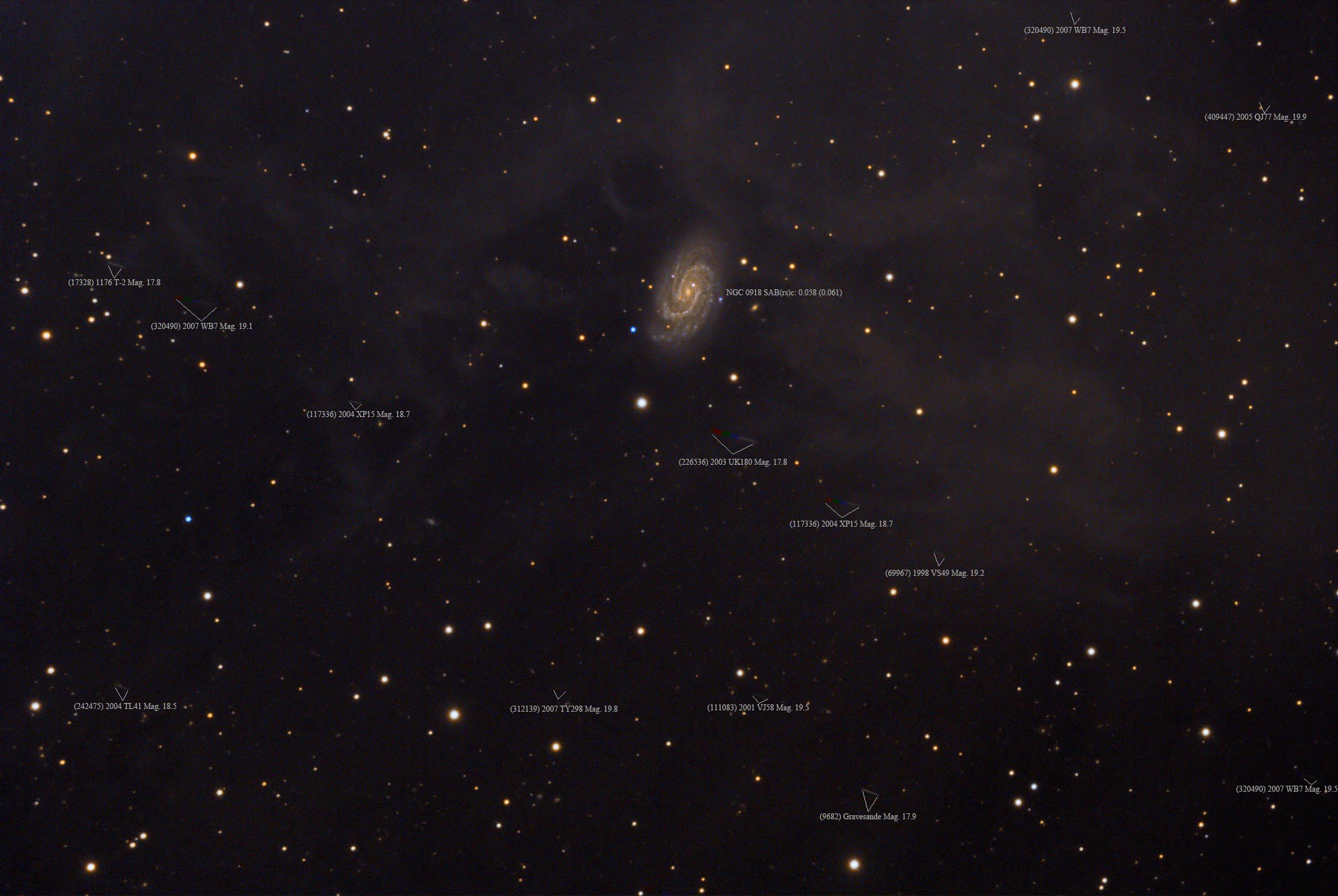 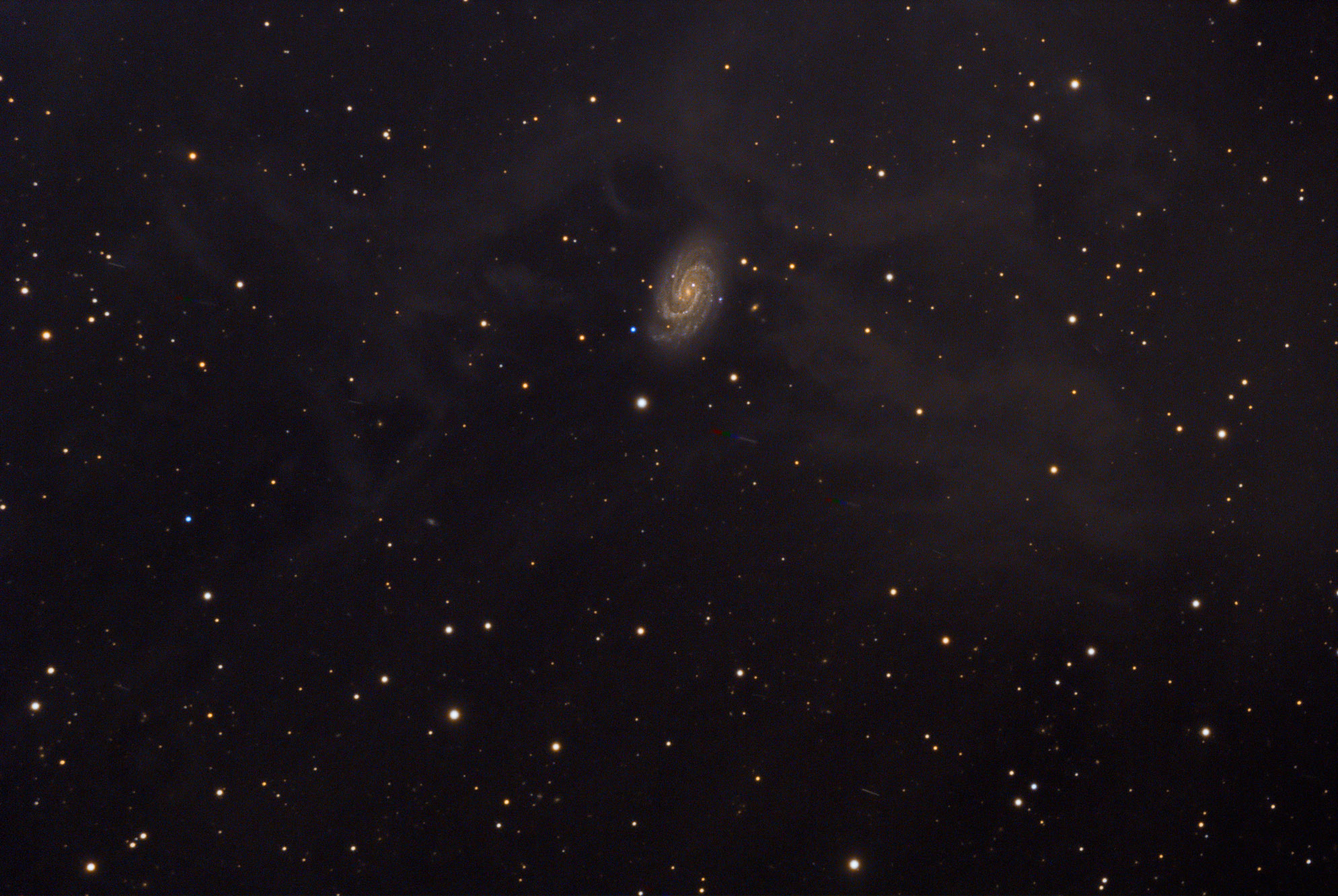