This is an image of a group of galaxies, including 6 NGC galaxies (4 entries in the catalog) and others in the field. The group is located in Triangulum about 200 million light-years away. At least the major galaxies are at that distance. Are they related? It appears two NGC 969 and NGC 974 may be interacting. NGC 969 is classed as S0 but appears to be a SB0 to me or maybe even SBa. It is obviously somewhat torn apart as stars are sprayed everywhere. NGC 974 is a ring type spiral with faint arms coming off of a rather football shaped ring. The western arm is rather well defined while the eastern one is a mess. It has a hint of a bar so is classed SAB(rs)b. Between these two is NGC 970 with consists of a pair of elliptical like galaxies in a common envelope. Is that the case or is one in front of the other with their star balls overlapping? There\'s no redshift data on this one so we don\'t even know if they are related to the first two. They certainly would fit Arp\'s classification for galaxies with the appearance of fission. In this case mitosis might be the better term.

Even more confusing is the case of NGC 971. The Sky says it is a double star. The annotated image has a line drawn to a point half way between the two stars. The NGC project is quite confused about this one. In the finder image they point to a rather bright orange star below the double star. But they give the coordinates for a position 28\" north of the double star but with the same RA as the star. NED also says it is a star but gives the same wrong coordinates as the NGC Project. The NGC Project says \"Lord Rosse\'s diagram and micrometric measurements with respect to NGC 970 point exactly to the star.\" Likely some error has misstated the stars declination. I put in three lines drawn to these three spots. In any case it isn\'t a galaxy.

The remaining NGC object is NGC 978, another double galaxy. Both are classed as S0. The large upper galaxy has a red shift that puts it at 207 million light years while the small southern one is at 189 million light years. Likely they are much closer with the difference being due to relative motion. Neither appear distorted and the little one seems to hide the fainter portions of the large one as well as darken it so I\'ll assume it is in front of the larger galaxy as redshift would indicate. I see little to indicate interaction so doubt they have come very close to each other though it\'s possible they will in the future. To darken the galaxy behind it has to have significant dust in its disk, rather rare for SO galaxies.

There are only 2 other galaxies in the image with redshift data. CGCG 505-008 appears double though one of the cores is likely a star. Which is the star is the question. Since the cores of such objects tend to be red I\'m going to say it is the eastern (left) one but my color data is poor (more on that in a bit). NED\'s position is half way between the two as if it sees this as one object.

Of more interest is NPM1G +32.0101. It is not classified by NED. It appears to be a double ring barred spiral. A very unusual galaxy. That outer ring is hard to explain, at least for me. Any ideas out there how this could happen?

The field is little studied. I\'ve labeled all easily seen galaxies listed in NED. I left out three very low surface brightness galaxies that show as very faint smudges in my image. I did pick up one. NGC 1023 GROUP:[TT2009] 39. The other three carry this same catalog prefix, only the number at the end is different. Normally NED will explain a catalog name but it refuses in this case. I have no idea what it means. NGC 1023 is over 6 degrees north and a bit east of my field and in Camelopardalis. Many rather bright galaxies aren\'t even listed in NED. I\'ve marked a few with a question mark as they seem much brighter than many it did include. The omitted ones likely didn\'t make the 2MASS catalog. One did make the 2MASS flat galaxy catalog, 2MFGC 02031. The Flat Galaxy Catalog requires galaxies be very flat for listing. It appears the 2MASS Flat Galaxy Catalog is far more lenient as to who it admits to its catalog.

Clouds made a mess of this one. I almost didn\'t even try to process it. Blue frames were totally lost to clouds, one luminance frame was very weak and foggy but I did include it as it seemed to help to do so but only if I used a noise rejection stack. These, I\'ve not had much luck with when only having 4 with one pretty lousy. But it worked better than 3 (cost me some asteroids however) so went with it. Now about the missing blue. There\'s a technique for creating green from a red and blue image. This is used to make color images from the DSS plates for instance. I did a similar math process but extended it out rather than interpolating an in-between value. Thus my color is suspect. Still I think it rather accurate. This one is on on the reshoot list more for more time to pick up the fainter tidal sprays I missed due to the thick haze and gunk I was imaging through. The way this winter is going it might not happen this year. Weather here is awful and I thought it bad last year! 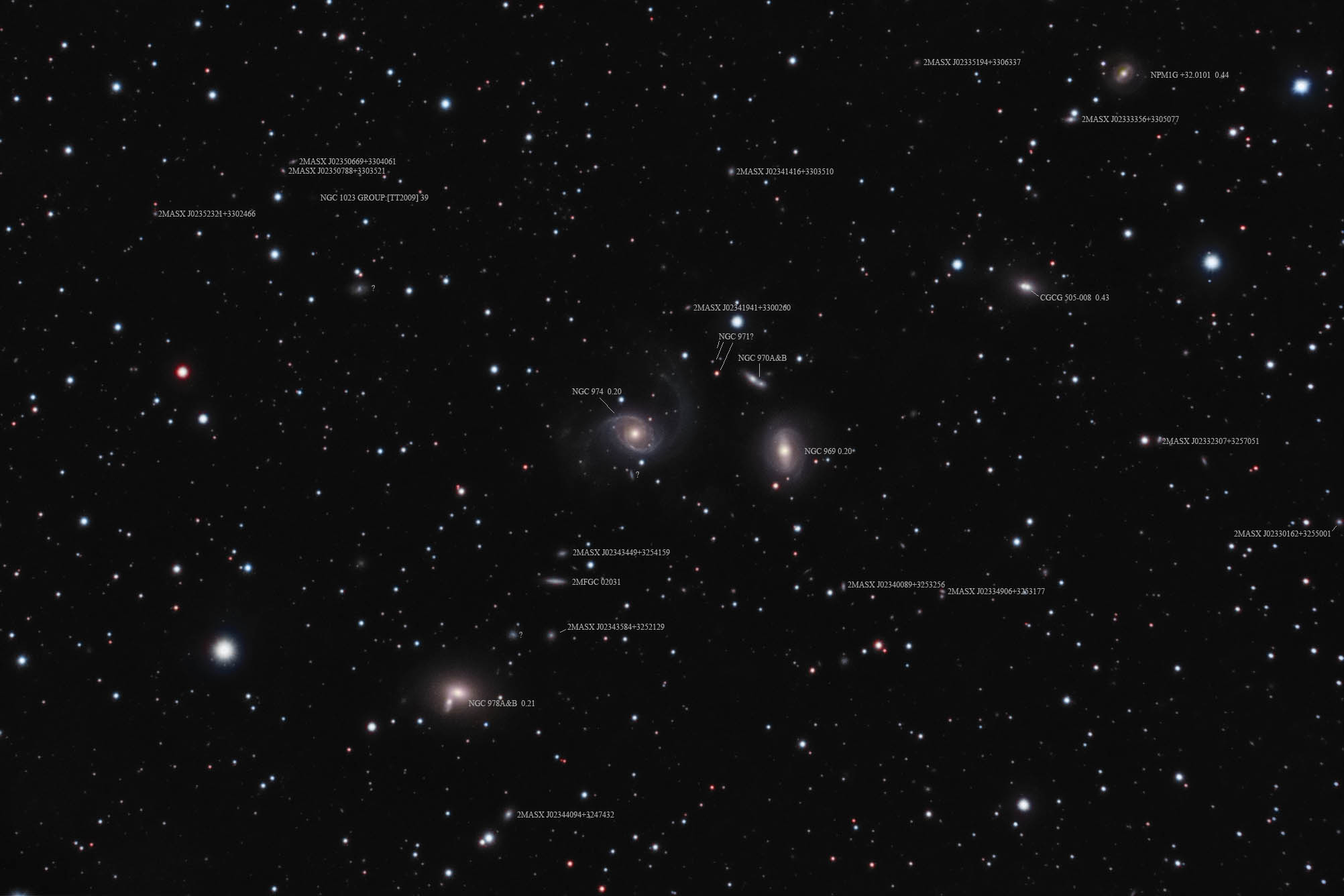 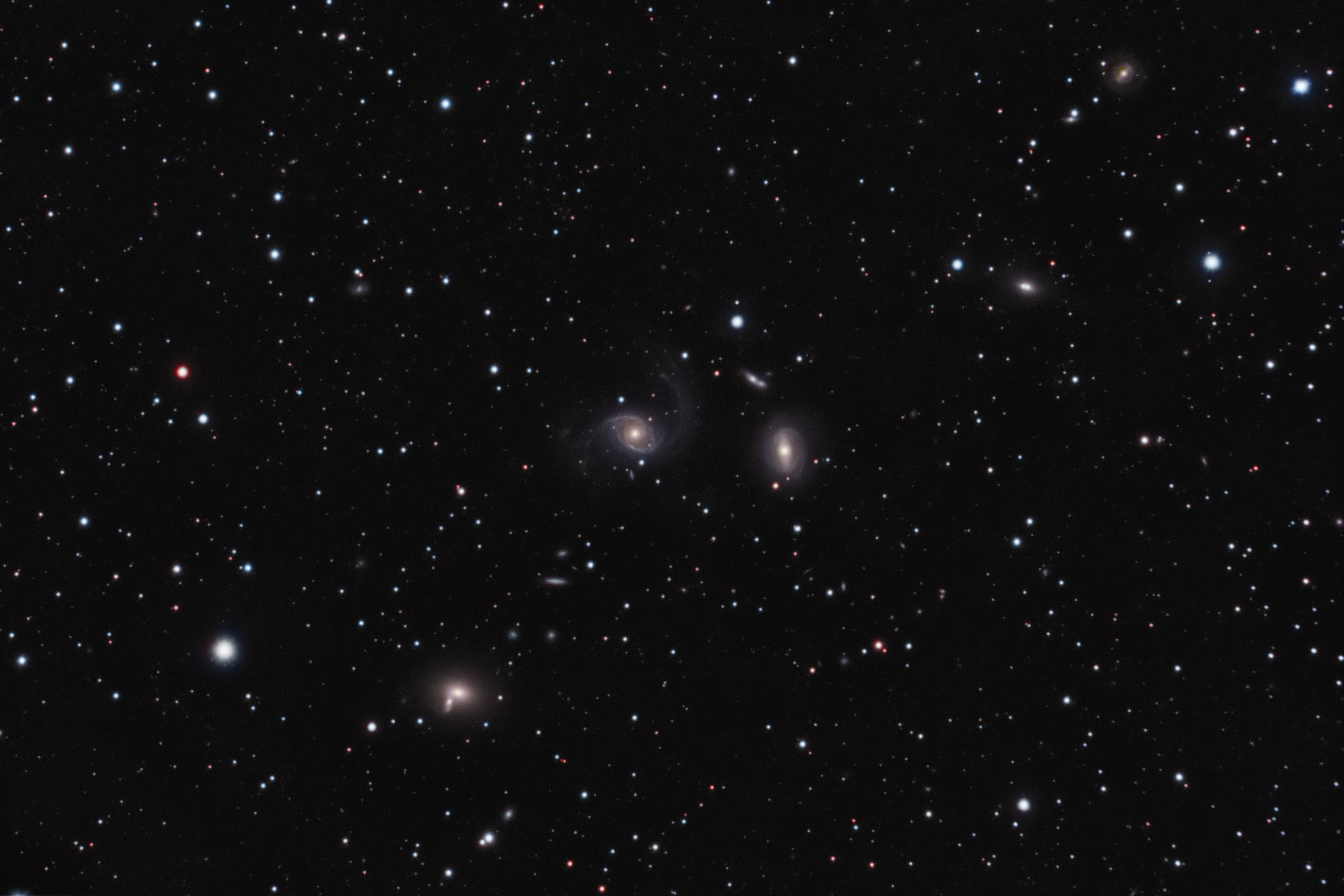