The NGC 1060 galaxy group, about 200 million light-years away, in southeast Triangulum, caught my eye at the NGC project so I have had it on my to-do list for some time now. I finally imaged it September 12, 2010 then forgot about it. I got several surprises once I started processing the image. First I noticed the galactic cirrus that lays across part of the image. I had no idea it was there. If I had I\'d have put in more than my standard 40 minutes of time. The other surprise was all the galaxy interaction going on in this field. My third surprise was that one of the galaxies in the field (near the bottom) is V Zw 274 which was on my Arp-like list to image. This will be a long post. Those here for the pretty pictures can scroll down now.

The NGC 1060 galaxy group goes by many names and galaxy counts. Officially the cluster under this name has only 6 members. I suppose those are the 6 NGC objects in the field. Unfortunately, one of them NGC 1062 is just a star. Though many catalogs incorrectly put that label on UGC 02201. Under the WBL 085 entry it has 7 members, as HDCE 0165 and PPS2 175 it has 12 members, USGC U145 sets the record at 13 members. Rather than try to figure out this ID mess I just labeled every galaxy NED has an entry for in my image. Distance based on redshift data using their 5 year WMAP calculator is given when possible. Many galaxies aren\'t listed in NED. Three of the brightest not in NED at the time the annotated image was made back in 2011 are noted with a question mark.

My color data is weak for coloring the galactic Cirrus. I debated even trying to apply what little color data I had to it. I tried both ways finally deciding to let the color data do its thing, noisy as it is. Converting to JPG format made it look a lot worse than it does in the TIFF file.

NGC 1057 is classed as S0. It seems to have some disk structure including a couple faint dust bands that give it a faint spiral structure. It was discovered by George Stoney in December 1849.

NGC 1060 appears to anchor the cluster. It is a huge E-S0 galaxy. Due to the cirrus in our galaxy, it is hard to tell where the galaxy ends. It appears to have a rather large halo. It was discovered by William Herschel on September 12, 1784. It is in the second H400 observing program.

NGC 1061 which is classed as irregular. It has two obvious spiral arms, one of which is truncated same as several other odd galaxies I\'ve imaged. In this case, the arms are embedded in a rather bright disk. It was discovered by George Stoney in December 1849.

NGC 1066 is another huge elliptical galaxy that appears to have a couple shells. In the outer one between two stars is an odd linear feature. I thought it an asteroid. But that is not the case. I found it in an image in the DR8 data release of the Sloan Survey. Unless they took their image at the exact same time as I did it is something else. Is it a flat galaxy seen edge on or some feature of the galaxy? I found nothing on it. NGC 1066 was discovered by William Herschel on September 12, 1784. It isn\'t in either H400 program.

NGC 1067 is an SAB(s)c or Sc galaxy, one of the few spirals in the group. The dust lane that defines one arm is far darker than its counterpart that defines the other arm. It also seems to have a linear feature almost at right angles to the bar like structure. At first glance, this seemed a normal spiral but these two features are far from normal. It was discovered by John Herschel on November 22, 1827.

Between 1066 and 1067 is UGC 02201 which some catalogs confuse with NGC 1062. An edge on spiral classed as Sc or Sd. The disk is obviously warped and not symmetrical. Likely it has interacted with others in the group. Could LEDA 213075 be involved? Without distance data for it, there\'s no way to know.

PGC 010337 is an even more distorted spiral seen nearly face on. I thought it a spiral I should say. Seems it is classed as either irregular or an irregular of the Magellanic type. it shows a plume of stars to the southwest. Likely it was a reasonable spiral before it tangled with its neighbors.

LEDA 213071 is a disturbed galaxy to the west (right) of PGC 010337. To me, it looks like a barred ring type spiral with two plumes for arms coming off the ring. They\'d be easier to see if not for the cirrus and extended halo of NGC 1060. No distance data on this one, unfortunately.

MCG +05-07-046 well to the southeast is another ring like disk galaxy with plumes coming from the ring. It appears to be an ordinary spiral rather than a barred spiral. Being somewhat out of the cirrus the plumes are easier to see. The edge on rather flat galaxy below it is anonymous, at least to NED. Since this field is covered by the newly released DR8 edition of the Sloan Survey I assume it will be picked up when NED adds that huge data file to its database. I don\'t expect that to be done overnight, however!

V Zw 274 is an entry in the Fifth Zwicky list of galaxies and was privately circulated rather than published. NED, however, picked it up and somehow I learned of it and put it on my to-do list. Then imaged it accidentally! Odd how things like this happen. I find no attempt to classify it. A blob with one well defined plume and one rather ill defined plume would seem to put it in the irregular class. How it got so torn up is the question. Without distance data, we can\'t even tell if it is a member of the group. Seems likely it got tore up by passing too close to another galaxy, likely one of the major elliptical galaxies, but without distance data, I can\'t tell if that is even possible. If anyone lives in these torn up galaxies can they even detect something is amiss? Could we if in such a messed up galaxy? Probably but I doubt we\'d really fully understand its shape. Seeing it in 2D we can\'t do much better from our vantage point either.

Another strange galaxy is LEDA 213076 northeast of NGC 1067. It has a super tiny core and is a featureless disk. If that is a disk. It could be an SO seen end on. I find nothing on it. It\'s the small core that makes it so unusual to my eye. Is that a star or star knot on the east edge? Looking at the Sloan data it appears to be a star. Their image shows some faint spiral arms in the disk and a faint vertical bar. 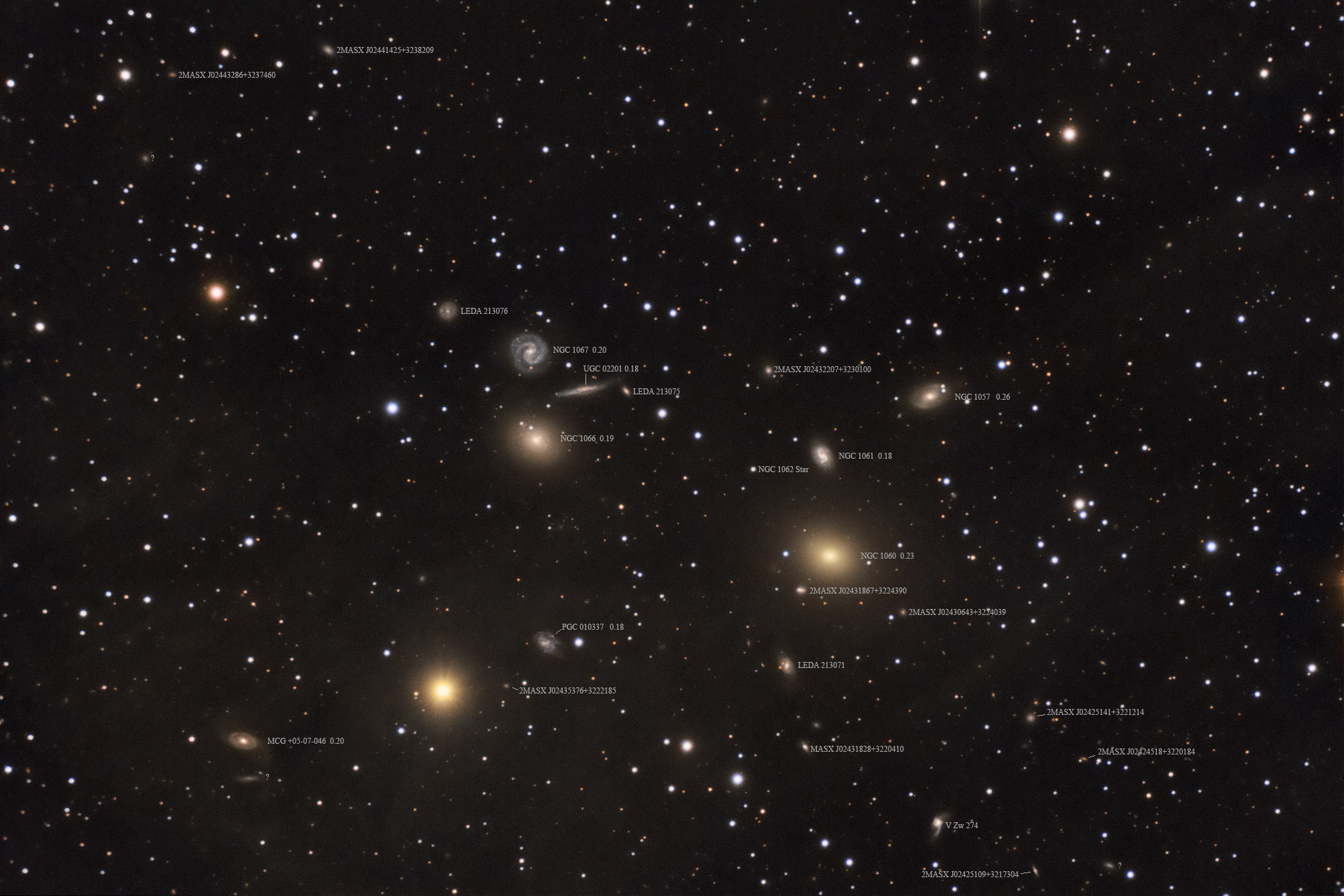 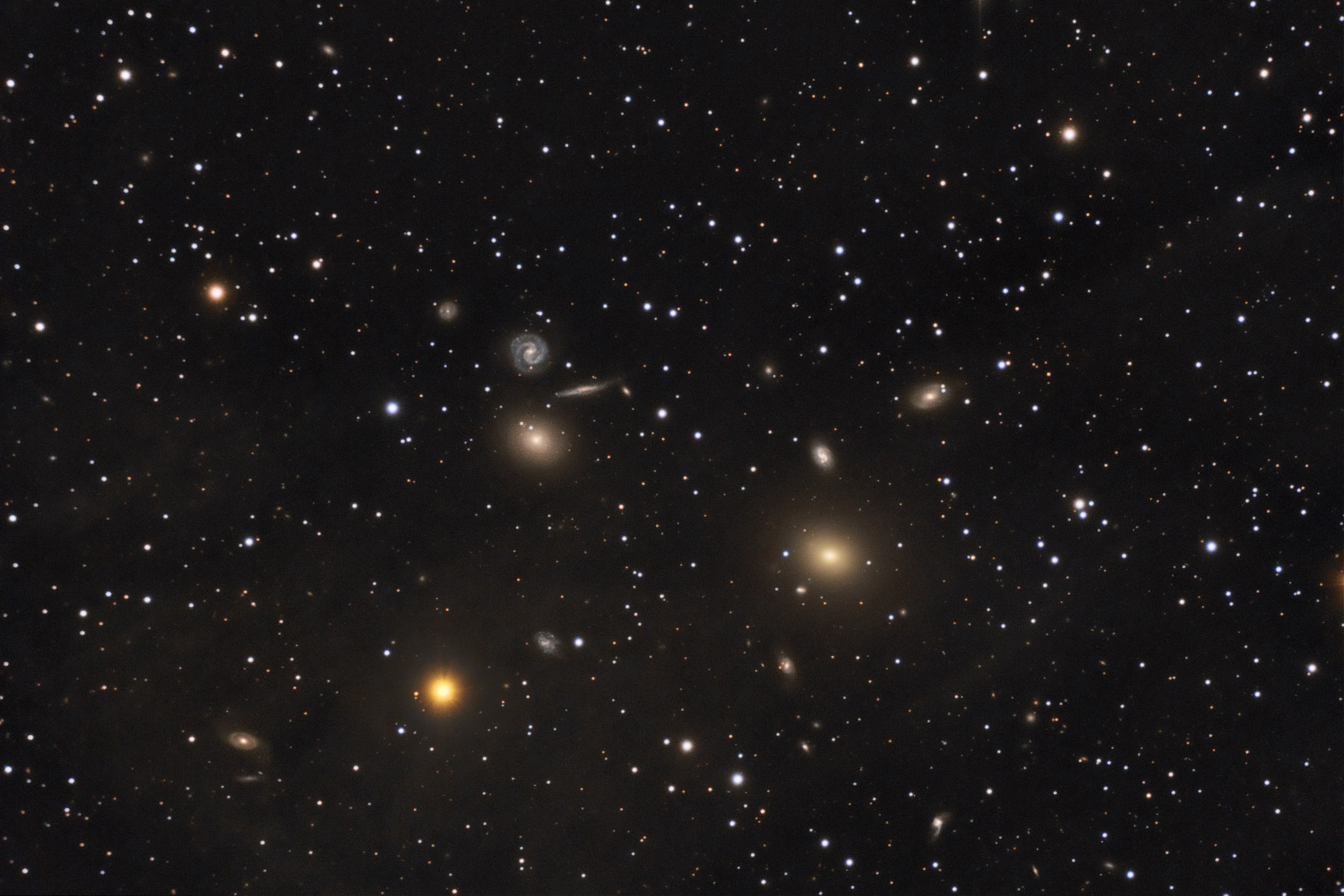