FGC 0356/NGC 1110 is a flat galaxy in Eridanus about 50 to 60 million light-years distant. Its southern declination makes it a difficult target in winter for me as I get a frozen fog layer above the lake I have to look through which greatly dims the image along with brightening the background to near full moon brightness. This limits how deep I can go. Rare is the night I can do even as well as this image, especially this winter. Still, it doesn\'t go as deep as I\'d like and seeing is much worse than even my poor normal of late.

NED classifies the galaxy as an SB(s)m galaxy. The NGC project calls it simply an Irregular galaxy. Usually, you have to be a disk galaxy (spiral) to be in the Flat Galaxy Catalog. The galaxy has three obvious blue near star-like regions. Two of them carry their own designations which NED lists as being: \"Companion galaxy to or part of NGC 1110.\" Both are listed as HII emitters. That to me indicates they are very active star-forming regions in the galaxy rather than separate companions. NGC 1110 was discovered by Francis Leavenworth on December 21, 1886.

To the lower right is NGC 1108. Its redshift puts it much further away at 410 million light-years. That makes it about 90,000 light-years in diameter, over twice the size of FGC 0356 which is only about 42 to 50 thousand light-years in size depending on which distance estimate you use. The NGC project classifies NGC 1108 as a lenticular galaxy while NED says S0-: pec?. On its western edge is what appears to be an edge on disk galaxy though could be a small S0. I was surprised to find it wasn\'t listed in NED at all. So I can\'t say if it is related to NGC 1108 or just a distant background galaxy. NGC 1108 was found by Lewis Swift on October 31, 1886.

The image contains several galaxy clusters. I\'ve noted them using the Big Cluster Galaxy to identify its location. The cluster\'s distance is usually noted by photographic redshift, denoted with a \"p\" while the BCG\'s redshift has been spectroscopically determined. Both are included with the cluster distance first.

Galaxies identified in NED only with a positional name, usually based on J2000 coordinates, are listed only as G with the redshift look back time travel distance computed using NED\'s 5 year WMAP calculation and noted in billions of light-years. Quasars are listed as Q with both the light-travel time distance and the redshift z value used in that calculation as astronomers feel light-travel time distances are misleading at such distances. Partly because so many assumptions are needed for the calculation which only a small change could make a rather large difference and because relativity and time passage makes things \"interesting\" For example (assuming those assumptions are right which is a big if) the quasar to the lower left of FGC 0346 shown with a light travel time distance of 10.65 billion years was only 5.7 billion years from us when the light left it. Since then the expansion of the universe has increased the distance between us until it took the light 10.65 billion years to reach us even though it was nearly half that distance from us when the light started heading our way. Due to that expansion it is estimated the quasar, if it still exists, would be 18 billion light-years from us today! Even without the apparently increasing expansion rate of the universe light leaving it today can never reach us as the distance between us will expand faster than light can travel. And no this doesn\'t violate Einstein\'s theory about not being able to travel faster than light. That says we can\'t travel through space faster than the speed of light but doesn\'t disallow space itself from expanding faster than this. 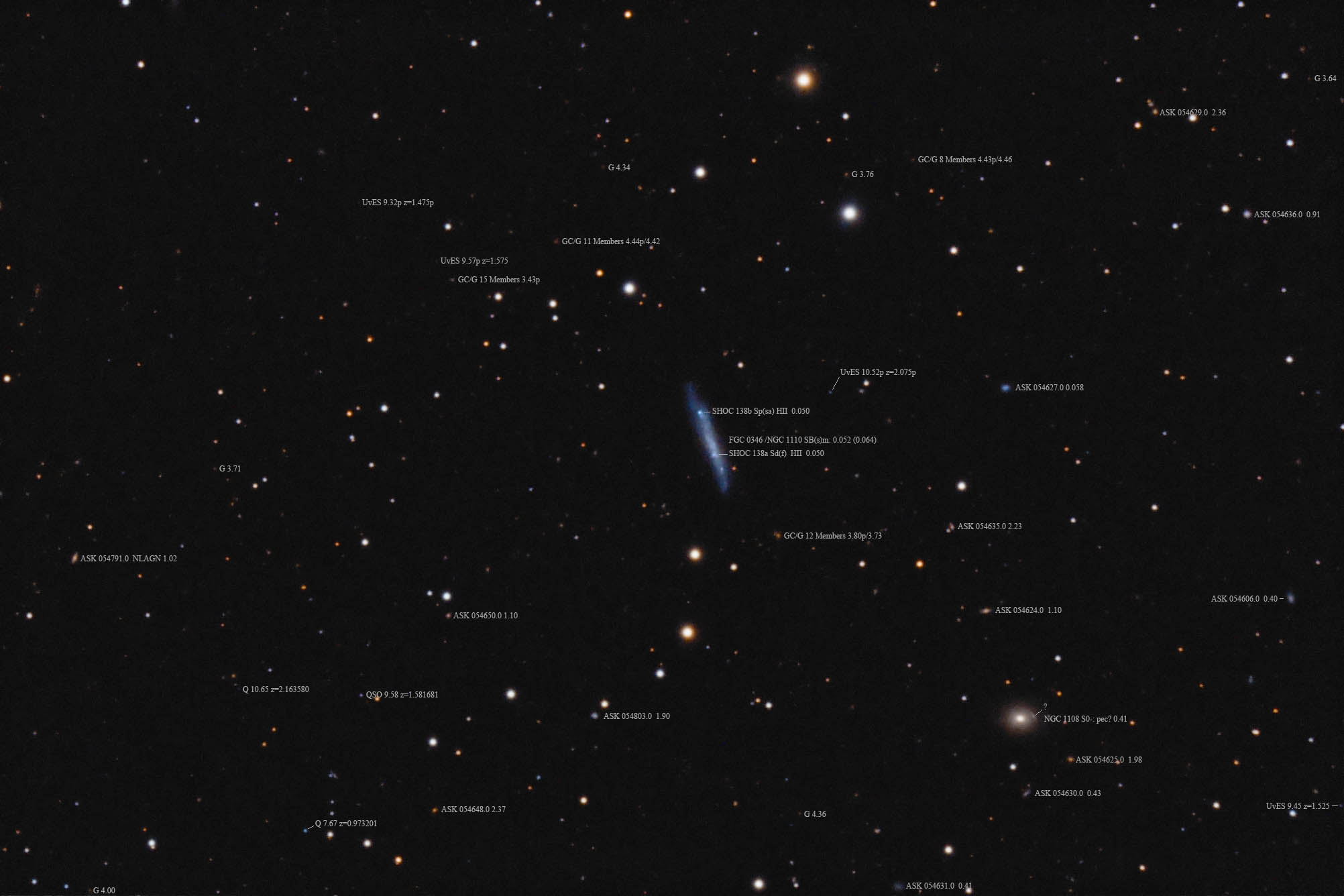 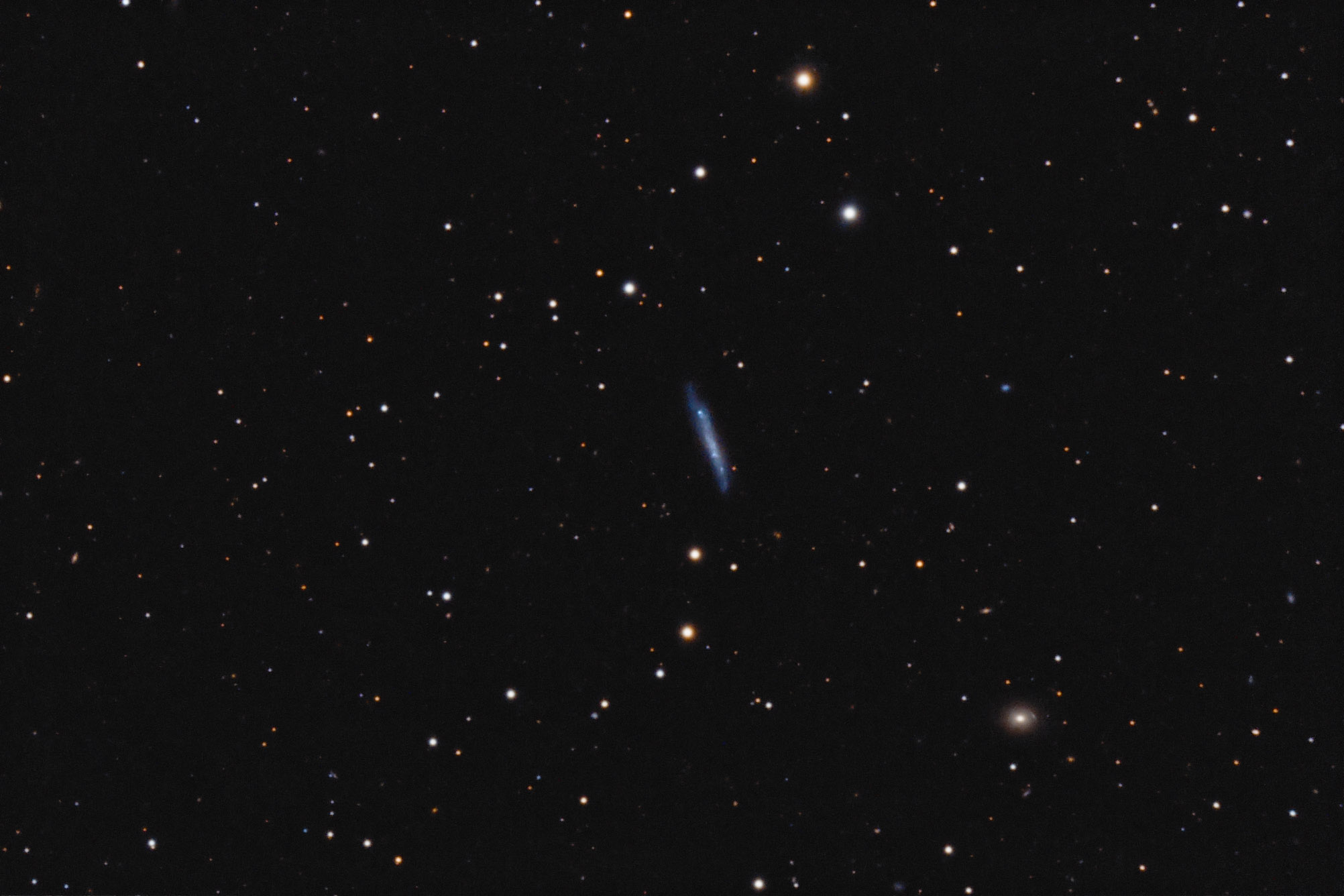