My first attempt at Arp 200 (April 2009) was not all that great so it went back on the reshoot list. I think this is a great improvement.

Arp 200/NGC 1134 is in Arp\'s class for galaxies with material ejected from the nuclei. That left me in the dark as to what he is meaning. Is it the tidal arm going west or is the much brighter eastern arm. Then I read his comment which really is confusing: \"Splash appearance on western side of galaxy points to low surface brightness companion 7\' south.\" That seems to refer to the tidal arm coming off the northwestern end but it doesn\'t point south but to the west-northwest. The galaxy to the south is not IC 0267 which is not low surface brightness and is 10 minutes south not 7. But the tidal plume does sort of point to UGC 02362 which is 7 minutes west (I said east by error in the first post) and is a low surface brightness galaxy that does appear possibly highly disturbed as if it did interact with NGC 1134. So I\'m going to assume Arp got his directions 90 degrees off (while I was 180 off in my first post!). I\'ve since confirmed with Jeff Kanipe that indeed Arp got his directions wrong. He puts a little triangle in the border of the north side of a galaxy. But he put the little wedge along the eastern side then wrote his comment assuming that was the northern side. Before this, I\'d never noticed that wedge or realized its significance when I did see it. Jeff agrees he was referring to the plume going to the west. It was discovered by William Herschel on October 16, 1784. It isn\'t in either H400 observing program.

I found nothing much on these galaxies indicating whether they were interacting or not. So I\'ll just say it seems likely but I\'ve been doing this long enough to know that what seems to be the case can be very wrong.

Arp 200 is classed by NED as simply S? and as S by the NGC project. It would seem the plume should give it a peculiar label but that isn\'t the case. Though it doesn\'t show in the POSS 1 red plate the NGC project uses. It is listed in the 2MASS catalog so is IR strong. Another indication of possible interaction.

Just under the plume is a fuzzy patch. Is it part of the plume or another galaxy. I found no answer or even a hint of an answer so it remains a big question mark to me.

UGC 02362 is classed as a Magellanic class irregular galaxy. If it interacted with NGC 1134 it may be more irregular than it was but I doubt any interaction caused its irregular condition. It may, however, have triggered the strong star formation that is currently going on it judging by its blue color and the fact it is listed in the 2MASS survey indicating strong IR emission hidden behind dust. Another indication of strong star new star formation.

IC 0267 is classed as (R\')SB(s)b by NED. That appears quite reasonable. It too is an IR galaxy in the 2Mass catalog though I see no visible signs of interaction. Nor is any needed to create an IR strong or even starburst galaxy. It was discovered by Lewis Swift on November 8, 1887.

This trio of galaxies all carry about the same redshift. All showing a distance of about 155 million light-years. NED shows no redshift data for any other galaxy in the image. There is an interesting looking pair of galaxies northwest of UGC 02362. The brighter is LEDA 213115 which also is in the 2MASS catalog. Though its close apparent companion is not in NED at all. Is it a true companion or just a line of sight galaxy? I have no idea.

What few other galaxies are listed in NED are all from the 2MASS survey with most being anonymous.

I wasn\'t going to prepare an annotated image but there are four asteroids in the image, two moving so slowly right at the point of moving from retrograde to prograde motion that they would be impossible to point out otherwise. Their names and magnitudes are on the annotated image so I won\'t repeat that here.

The field is in some faint galactic cirrus. It was so faint it didn\'t show on the color filtered frames. I don\'t see this cirrus on any internet image of the field I found. So at first, I thought it due to a bad flat or gradient from some unknown source. But when I stretched the original frames from 2009 taken with a different camera orientation I could match up the brightest patches perfectly so it is real. It would take a much longer exposure and a much wider field of view than mine to really bring it out. 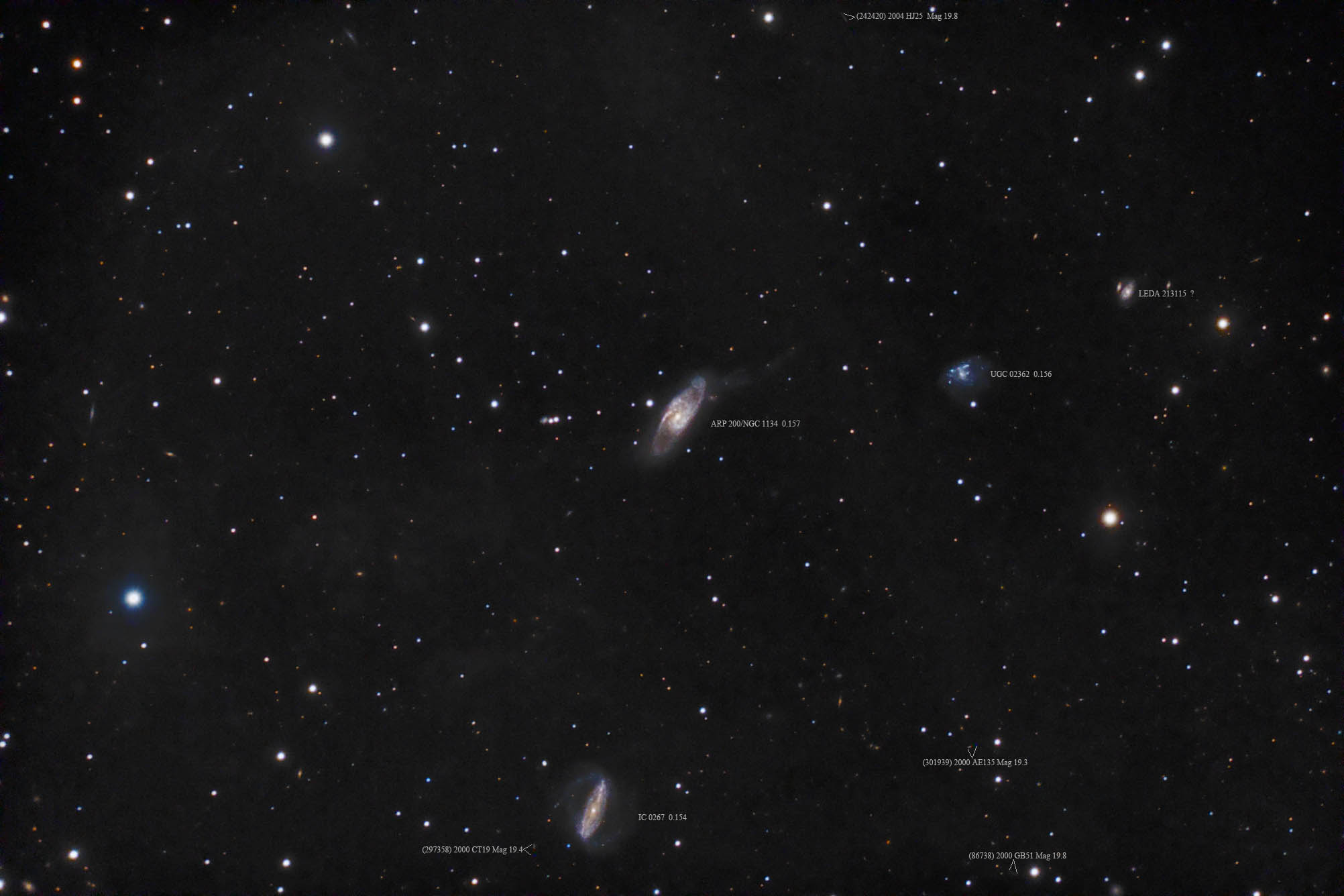 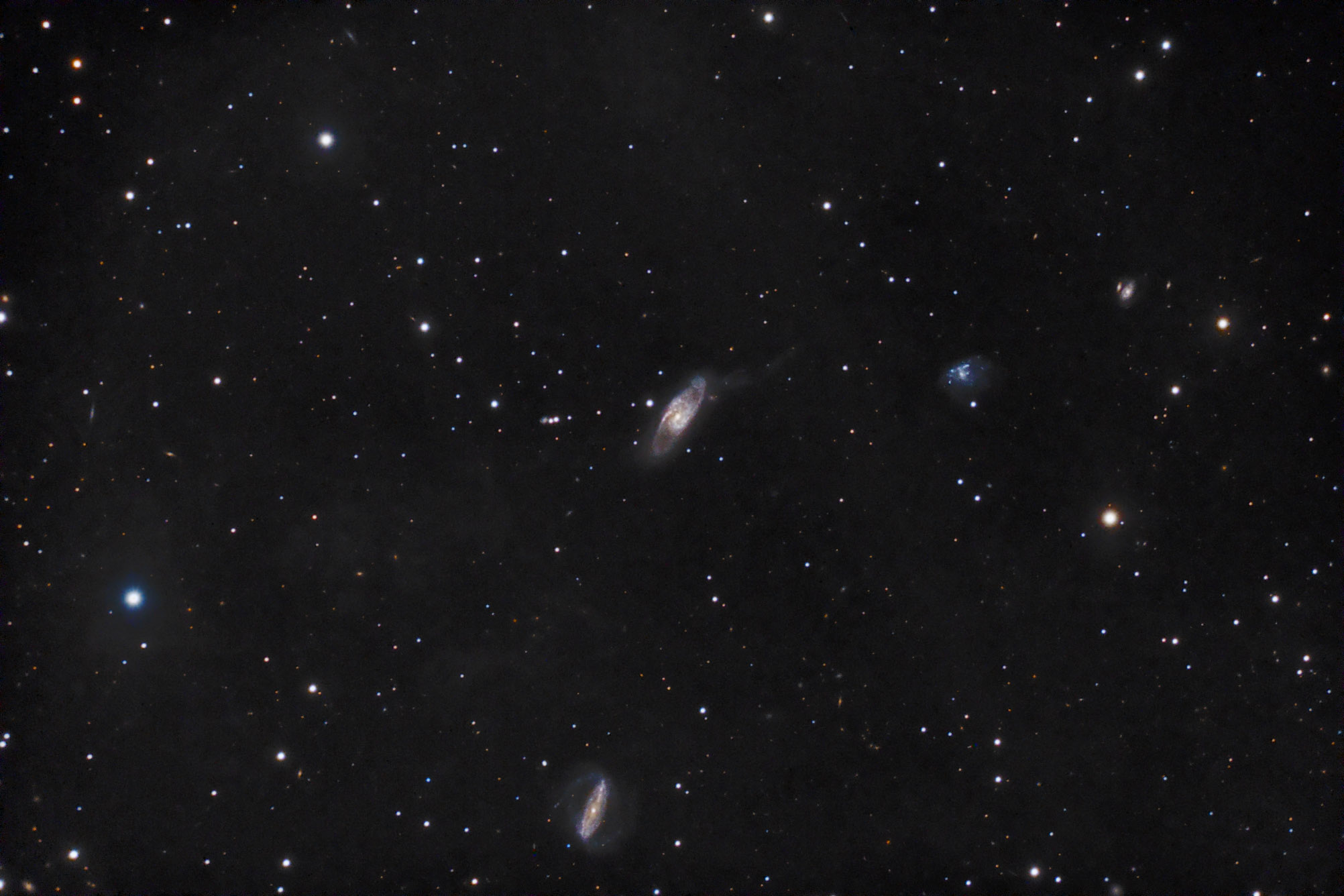 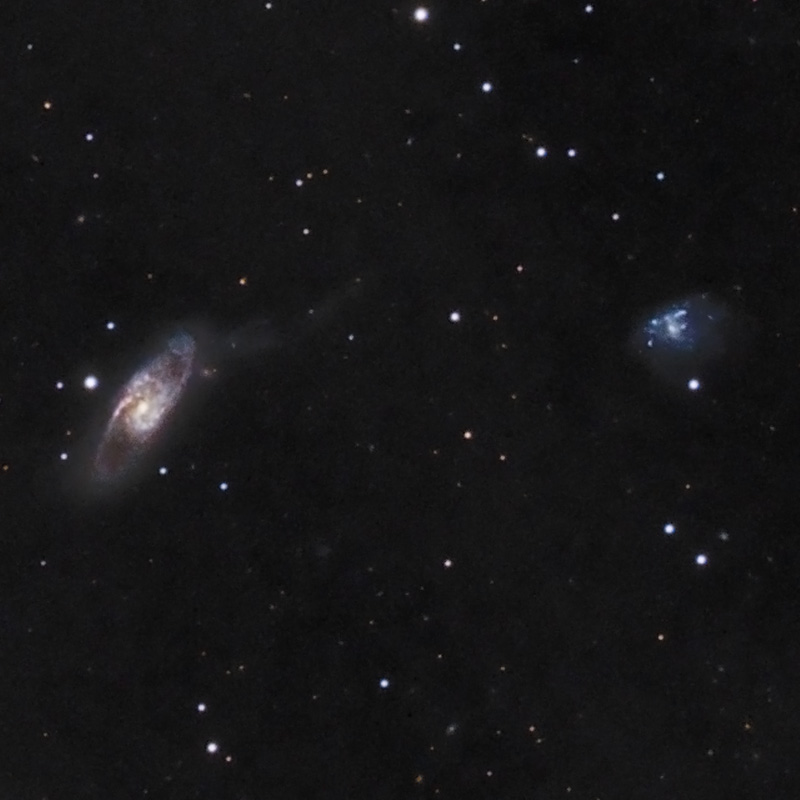