VV699 is a triple galaxy system in Eridanus about 170 to 200 million light-years distant. The three are NGC 1721, NGC 1725 and NGC 1728. Their redshifts put them at a distance of 205, 178 and 171 million light-years. Since they appear to be possibly interacting these differences may just reflect their relative motion more than a true distance difference. I find no other distance estimates for them.

NGC 1721 appears the most disturbed. NED classes it (R\')SAB(s)0^0^ pec while the NGC Project says more simply S0. I can\'t fathom that one. The inner core does have some elements of an SO but you have to ignore the huge outer spiral arms or is it arm. I see an arm coming from the NW ansa of the inner disk but the other end is too obscured by NGC 1725 to see what is going on there. I suppose it is possible the eastern arm is just a continuation of the western one though I doubt that.

NGC 1725 is classed S0 by NED and E-S0 by the NGC project. These both seem reasonable to me. It doesn\'t seem disturbed. So is it really interacting with the others? There are no papers on this trio that address this issue. They are just catalog listings or physical descriptions. Ellipticals are dense so can cause interaction without showing much distortion themselves. That may be the case here.

NGC 1728 is classed as Sa pec with spectral emission lines by NED and simply as Sa by the NGC project. The disk is warped so I can understand the peculiar label NED gives it. The warped disk indicates interaction with some galaxy. Is it both the other two or just NGC 1721? Again nothing addressing this turned up in my search.

I imaged this field twice. First time NGC 1723 at the top was just out of frame with its faint large arm just in the edge of the field looking just like a halo from a bright star. It wasn\'t until I went to process the image that I looked at that area on the POSS plates and found it was the edge of a galaxy. Back to the telescope a year later to retake it with this neat spiral in the field. I never did process the first attempt.

NGC 1723 is classed as SB(r)a pec by NED and SB by the NGC Project. The two arms that come off the very strong bar nearly touch to make a complete ring hence the (r) designation at NED. Add in the huge distorted arm outer arm structure and it well deserves its Pec label. With a redshift virtually the same as that of NGC 1728 and nearly that of NGC 1725 it very likely interacted with the VV699 trio sometime in the past. Is it the cause of NGC 1721\'s outer ring-like arms?

The VV catalog calls the trio isolated. But if you check my annotated image or keep reading you\'ll find that isn\'t the case. The few other galaxies for which NED has redshift data are also in this distance range.

2MFGC 04079 to the west of NGC 1721 is at 200 million light-years about the same as NGC 1721. NED has no classification for it. 2MFGC 04080 to the southwest is in the 2 micron flat galaxy catalog though it doesn\'t look all that flat to me. It is the third galaxy in the field to sport a redshift of 171 million light-years. In red light and IR light, it does look far flatter than in blue light so that may be the way it got into that catalog. NED doesn\'t classify it but does say it is 0.4 by 0.3 minutes in size, hardly flat. But their red light POSS I image shows it very flat. Odd.

The only other galaxy in the field with redshift data is the edge on spiral MCG -02-13-031 at 168 million light-years. Again a member of this rapidly expanding group. NED classes it as SB(s)c? indicating the arm structure is very hard to determine with such an edge on view. Its disk seems slightly warped as well. NED says it has some HII emission lines in its spectra. This would indicate it contains regions of active star formation.

Sharp eyed observers might notice a linear feature in the northwestern part of NGC 1721\'s outer arm or plume. It looks much like a short asteroid trail. But it is just a distant, anonymous, flat, edge on, galaxy seen through the thin stars of the galaxy. 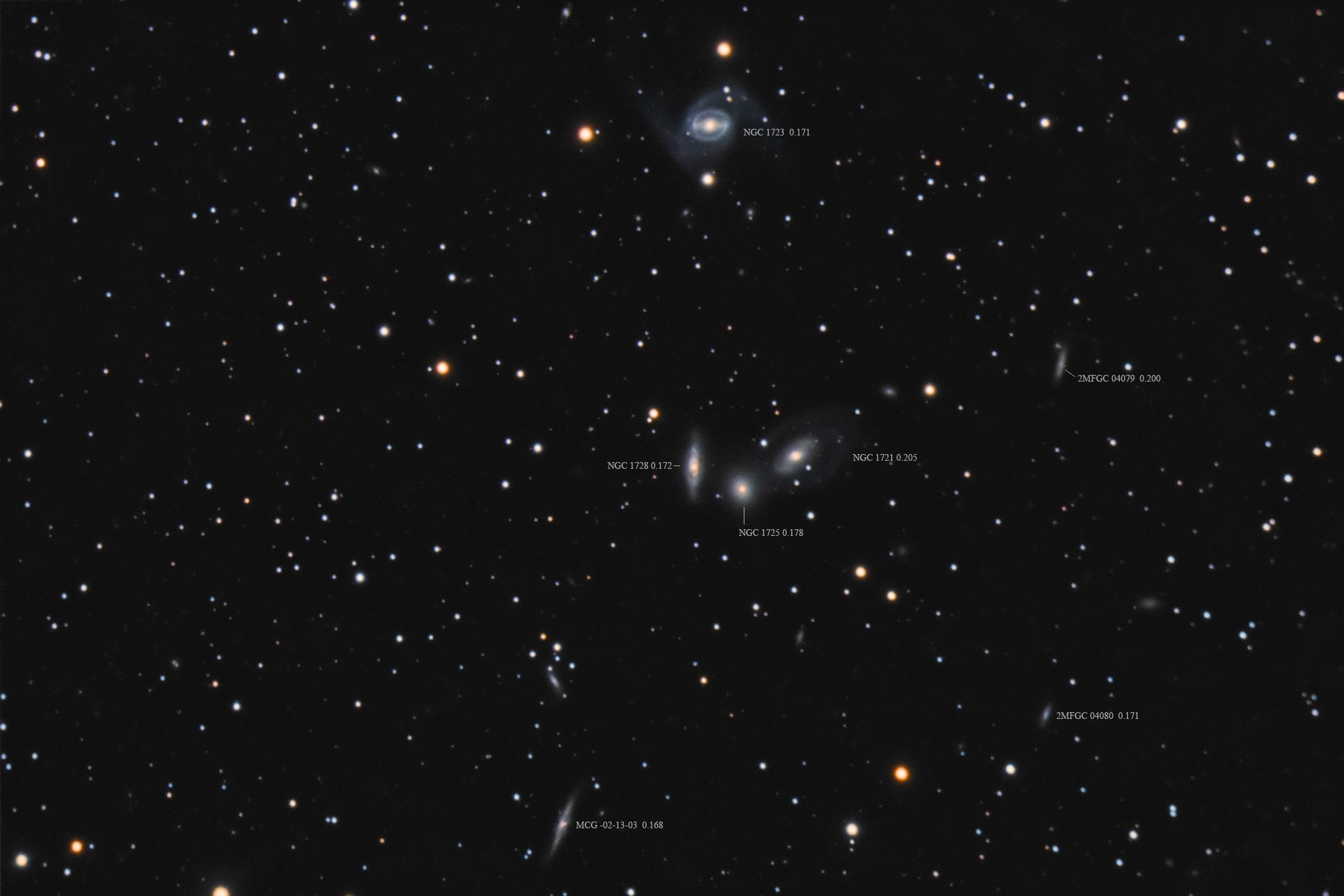 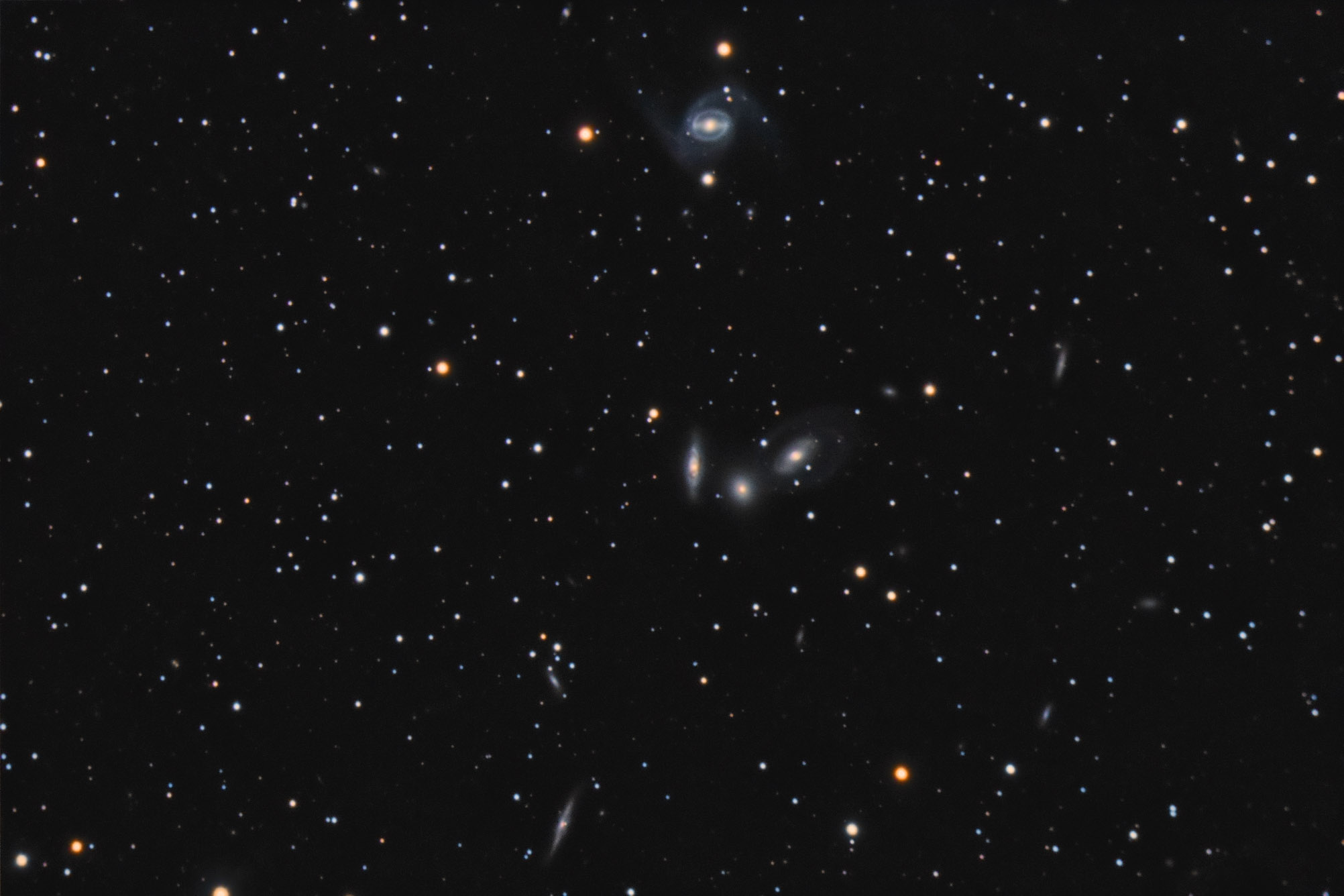