I\'ve had this one on my to-do list from the beginning but until my Polaris trees were no more it was forever hidden behind them. The mystery is why this galaxy looks as it does. A merger would be the most reasonable idea. For the arms to still be so disturbed most think some remains of the other galaxy should exist but that doesn\'t seem to be the case. This leaves interaction but there\'s no obvious candidate for that. NGC 2146A in the upper left corner may be a neighbor but it is much smaller. It looks rather normal. Being smaller it would have taken the brunt of any interaction so is pretty well ruled out. No other galaxies seem to be candidates. I searched out 5 degrees in all directions and nothing with a significant mass turned up that could have done the deed. All were tiny by comparison and looked unharmed but for NGC 2336 which is a nice undistorted spiral. Even without a candidate, the HST page seems to go for the latter explanation. But until someone finds the interacting galaxy I\'m favoring the idea it totally consumed the other galaxy tearing it to so many shreds nothing recognizable is left but some plumes. I\'d think there\'d be a compositional difference however between stars from each galaxy and they\'d be still in streams so recognizable. Especially if one of the plumes is from the other galaxy. So far I didn\'t find any papers noting this. A point in favor of the interacting faction I admit. Sill where is it?

You can read more and see the HST image at: http://www.spacetelescope.org/images/potw1134a/ Note their image is false color. Still, it shows many of the HII regions I picked up without the use of an H alpha filter. They are an orange-brown color in the false color HST image rather than the pink color they are in my close to true color image. Only two other galaxies in the image had any redshift data as did one quasar. The pole region isn\'t covered by the Sloan survey so only brighter galaxies, mostly IR luminous are cataloged. What few of those were I\'ve also noted by name in the annotated image but, of course, without any distance estimate. Several interesting looking galaxies didn\'t make any catalog NED carries and are noted with just a question mark. On the other hand, The Sky shows a galaxy PGC 142974 above NGC 2146 at 6h 18m 54s +78d 27\' 8\" at magnitude 18.6. There\'s absolutely nothing at that position. That\'s not all that far from one of the question mark galaxies but I can\'t corrupt its coordinates 6h 19m 51.7\" +78d 27m 38\" to match. Time to head for that booze cabinet again. This galaxy was discovered in 1876 by August Winnecke, a German Astronomer who found 8 new NGC objects and is co-discoverer of another 3.

Clouds hampered this image. I probably should have retaken it. Instead, I threw out 5 of 8 L image lost to clouds but kept the other three even though 2 were dimmed by clouds. Since I was taking 8 L I took 3 of each color instead of my normal 2. Good thing as clouds nailed them to some extent as well but I didn\'t throw any out. Instead, I combined all color and the three L images into a pseudo luminance image and used that. Still, color balance was pretty poor as the clouds did a number on all color channels. I hope I managed to get them about right. 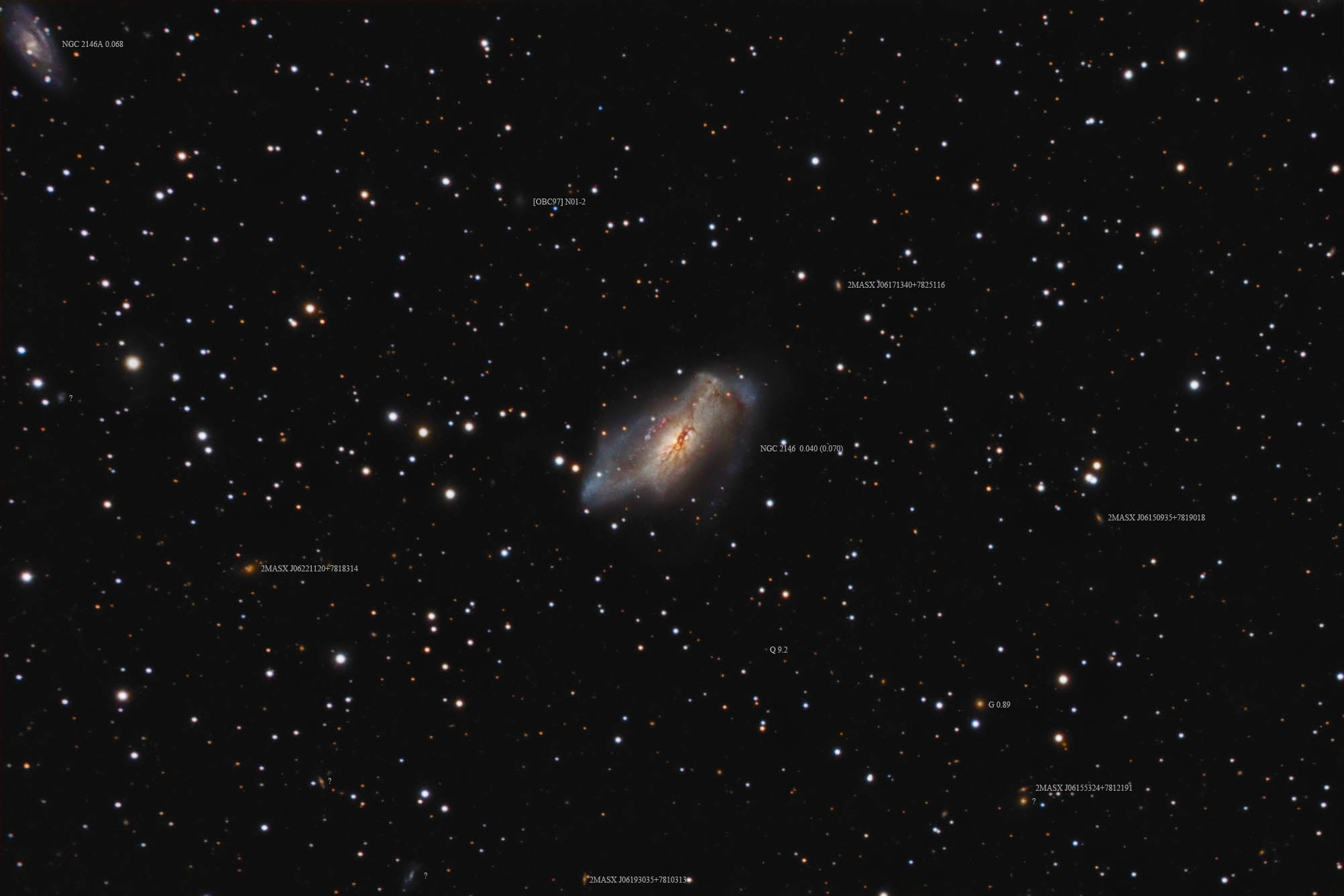 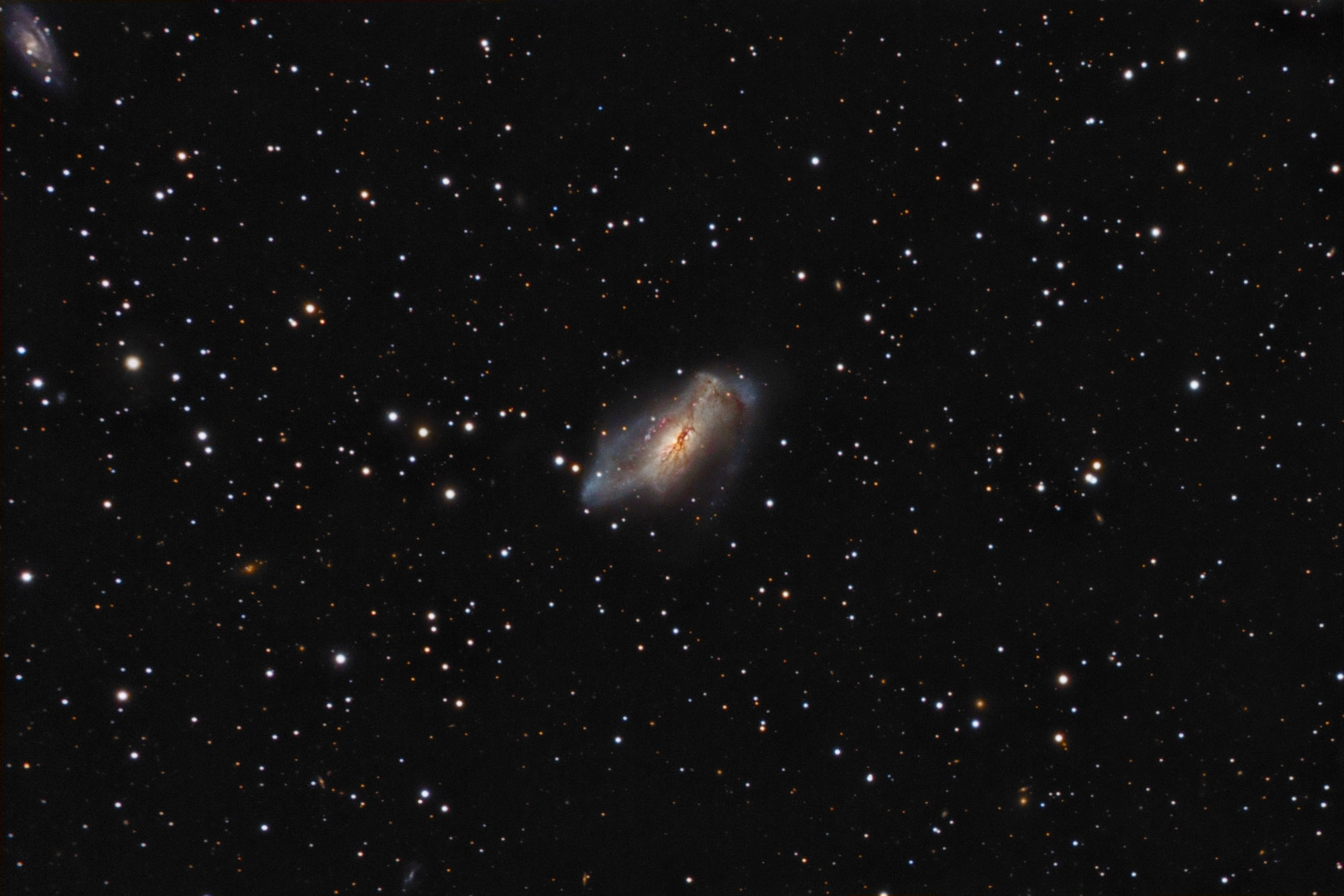 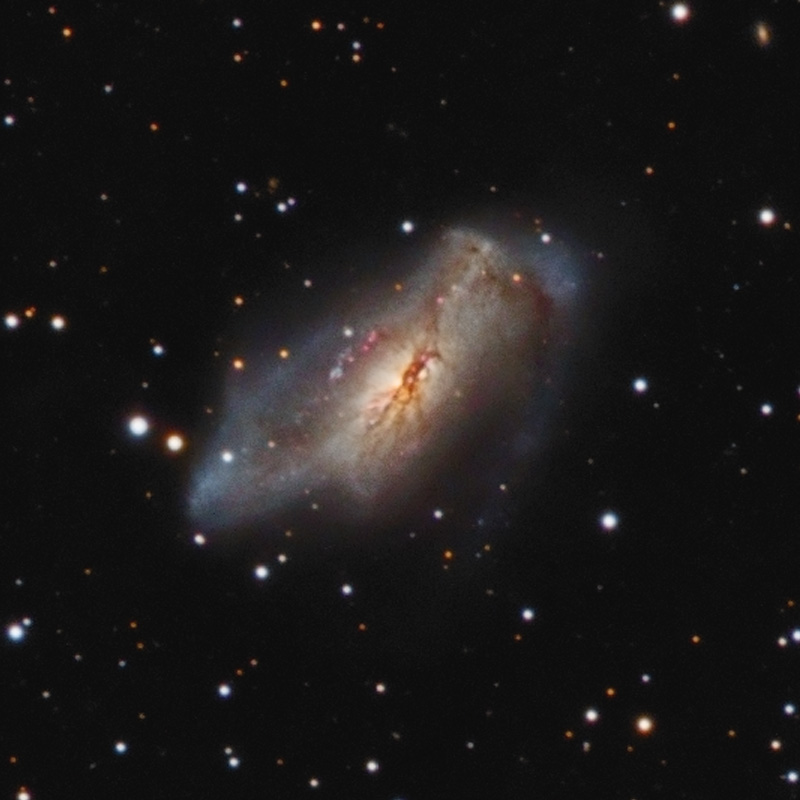