This is an image of the compact galaxy group WBL 126/UZC-CG 050 which is about 240 million light-years away in the northwest corner of Gemini. It is composed of 5 NGC galaxies, all quite red in color. Before I researched this group I considered several of them to be red spirals though it turns out all but one are classified as S0 or elliptical much to my surprise. I\'ll take them in NGC order.

NGC 2288/IC 2173 is the smallest and faintest of the group. NED fails to classify it while the NGC Project says E. I do agree with this one. It was found February 22, 1849 by William Parsons\' assistant George Stoney with his 72\" scope.

NGC 2290 is classified as (R)SAa by NED and simply Sa by the NGC project. How they ignore the ring I don\'t know. It too was found by William Herschel also on February 4, 1793. It is rather red for an Sa galaxy.

NGC 2291 to the north of the first three is shown as SA(0)^0^: by NED indicating it is rather uncertain of this while the NGC Project says S0. I find it more Sa though its lack of dust might move it into the SA0 realm. Still, it has a faint but easily seen spiral pattern thanks to being seen nearly face-on. It too was found by William Herschel but years earlier on January 22, 1827 using the same 18.7\" reflector. I assume he missed the other two as his field of view was very restricted. They may not have been in his field of view. None of those discovered by William Herschel are in either H400 program.

NGC 2294 is the last member of the group and classed E6: by the NGC project and NED. At least they seem uncertain. I see an S0 galaxy with a prominent ring. How this is overlooked I can\'t fathom. Again it is rather red for a ring spiral. I have to wonder if this somehow is part of the reason for the classification. To me, it is a disk galaxy seen rather strongly tilted toward being seen edge-on which gives it the outline of an E6 elliptical but not the 3D structure of such a galaxy. It was discovered by the William Parsons\' assistant, George Stoney, on February 22, 1849 with his huge 72\" scope. Was it too faint for Herschel\'s scope?

While three of these were discovered by William Herschel none are in either of the two Herschel 400 lists of the Astronomical League\'s observing program.

There\'s a rather odd blue galaxy near the top of my image, KUG 0647+336 which NED calls simply a Spiral. A note at NED, however, says it has a blue partial ring. I can\'t seem to see the ring nor do I see a spiral pattern though it does appear to be a disk galaxy and is blue. It seems to have several huge blue star clusters in it but I see no pattern to them or much else about the galaxy other than it has an obvious core. Seems a rather peculiar S0 galaxy to me. Unfortunately, NED has no redshift data on any but the 5 NGC galaxies so I don\'t know if it is a distant or nearby galaxy.

A rather odd flat galaxy is near the bottom of the frame left of center. It only made the 2 Micron survey\'s flat galaxy rules, however. Still, it looks darned flat to me. It seems to have a very off-center core which could indicate it is a \"sloshed\" galaxy. Another spiral galaxy is just to its east. I have no idea if they are related and if they are, did the other galaxy have anything to do with its missing eastern arm.

Most of the galaxies in the frame aren\'t listed in NED at all. Even some rather bright ones I have labeled with question marks.

Another flat galaxy is seen at the far right edge of my image mostly off the edge. The portion that is in the frame looks just like an asteroid trail. The galaxy isn\'t in NED so I can\'t give it a designation. I have marked it with simply \"G\" and a line to it showing I didn\'t miss an asteroid. I was certain it was a new asteroid when I first saw it but looking at the POSS plates saw it is a very flat galaxy. How it missed either of the flat galaxy catalogs I don\'t know. I wish I\'d been a minute of arc further west and picked up the entire galaxy.

But there is an asteroid in the image which I\'d likely have missed but for trying to find one at the position of the flat galaxy. It is in the upper right corner and marked on the annotated image. There is a break in the trail as I lost some frames to clouds. 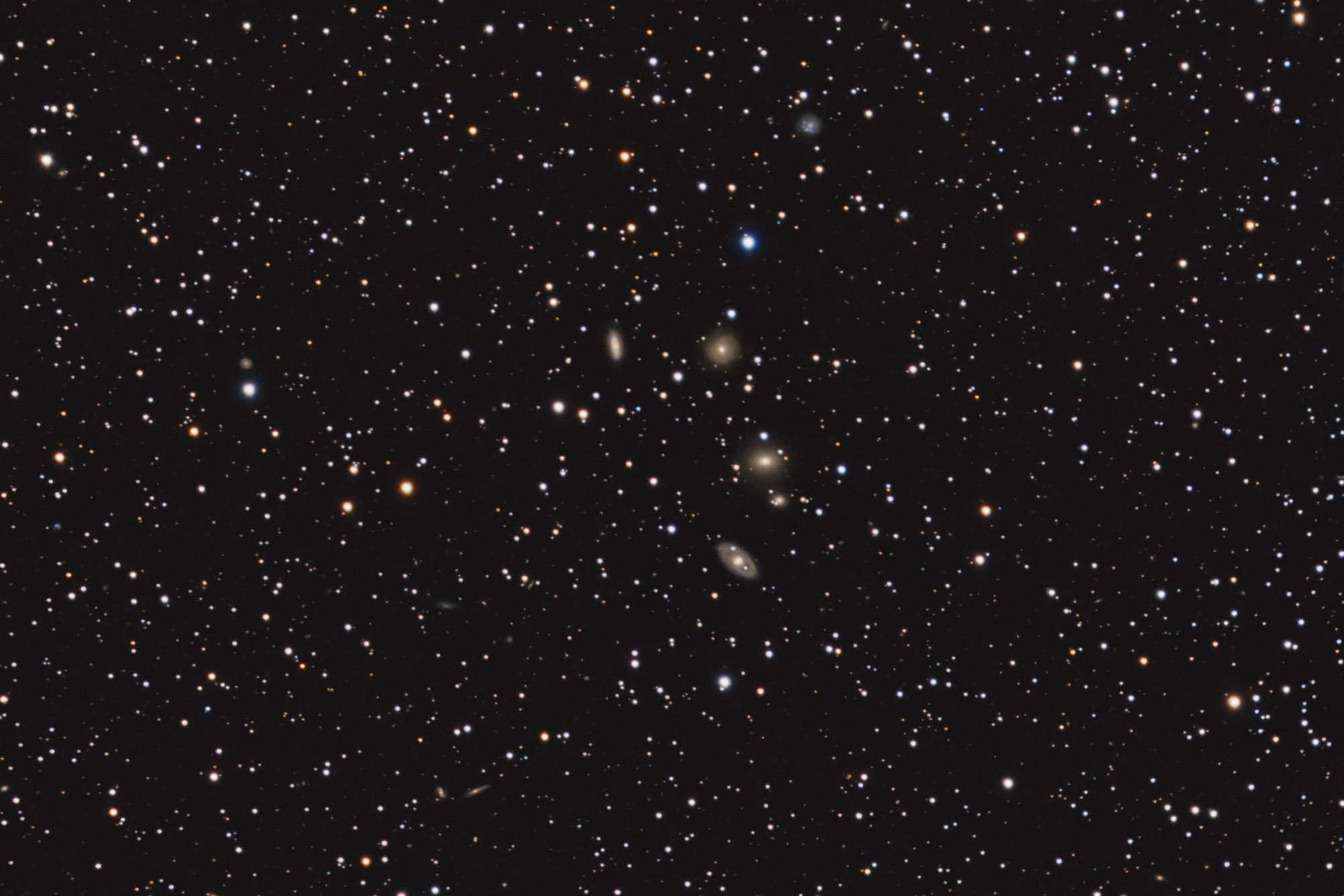 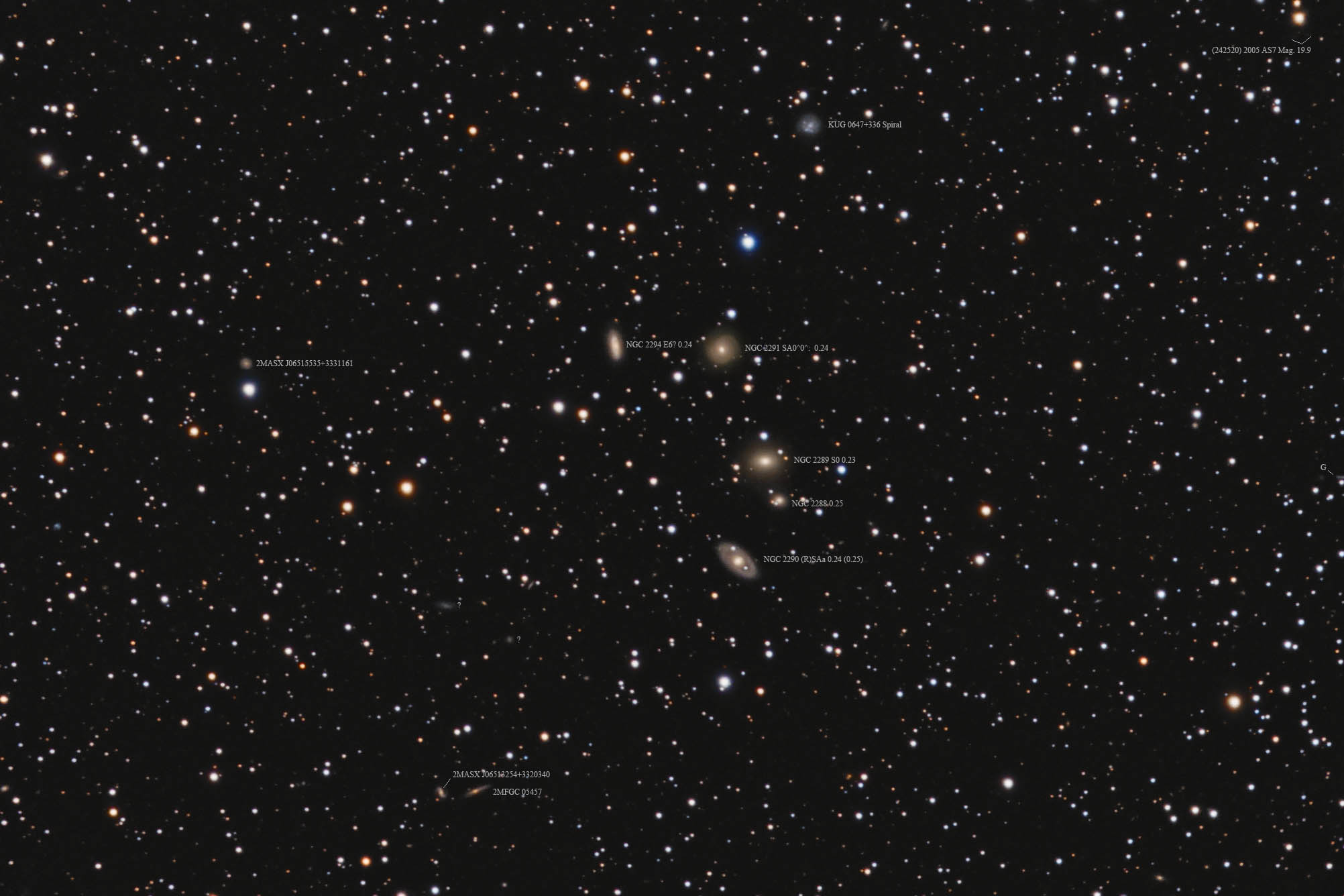