NGC 2371-NGC2372 is a planetary nebula in Gemini. William Herschel found it twice in one night not realizing it the second time. Nor did Dreyer notice it when assembling his catalog so the two entries for the same object stuck. Herschel made his double discovery on March 12, 1785. It is in the original H400 program. My entry with my 10\" f/5 at up to 300 power on March 16, 1985 under good transparency but lousy seeing reads: \"Two bright puffs that seem brighter in the centers of each. Tonight the seeing is poor and it appears like two objects. On better nights it appears to be a single object and I even wondered how anyone could think it two. Tonight it is just the opposite. Steady seeing is crucial for this object.\"

While seeing wasn\'t really bad for this one it wasn\'t all that good. Then I screwed up the processing of the images when I used the wrong dark file on them. It wiped out the very faint details, mostly at the edges of the frame so didn\'t hurt the nebula much but did wipe out some interesting galaxies. I didn\'t have the right dark so started to take some. Had a setting wrong so deleted the darks and redid them. One problem, I deleted the light frames, not the bad darks. The new darks overwrote the deleted files so I couldn\'t recover them. OOPS. So I had to go with the poorly processed light frames. Least I didn\'t delete the processed frames, only the original ones. I wish the software would force them to read only status so you can\'t make that mistake. (Edit: Now I do exactly that and never processess anything on the imaging computer. All files are copied to another computer for processing -- I learned my lesson the hard way.) Anyway, I had to crop the edges of this one to remove the screwed up parts and lost several dozen background galaxies. Bad seeing (Edit: And my ham-handed processing) causes the irregular halos around the brighter stars and especially the central white dwarf that created the nebula. I can\'t find a consensus on its distance. Say 3900 light years.

This was an early image of mine when I didn\'t understand proper imaging technique nor how to process images so stars didn\'t dominate. In fact, I did it all wrong both in processing, some of which is noted above, and in taking the data. I need to redo this one on a good night. While I used over twice as much luminance data as I normally take it doesn\'t begin to go as deep as I do now with half the data due to all the mistakes I made. But it is, so far, the only image of this one I\'ve taken so will have to do.

I haven\'t tried to identify the galaxy cluster in the lower left corner of the image. It is a rather rich cluster. (Edit: I didn\'t try to research an image as I do today.) 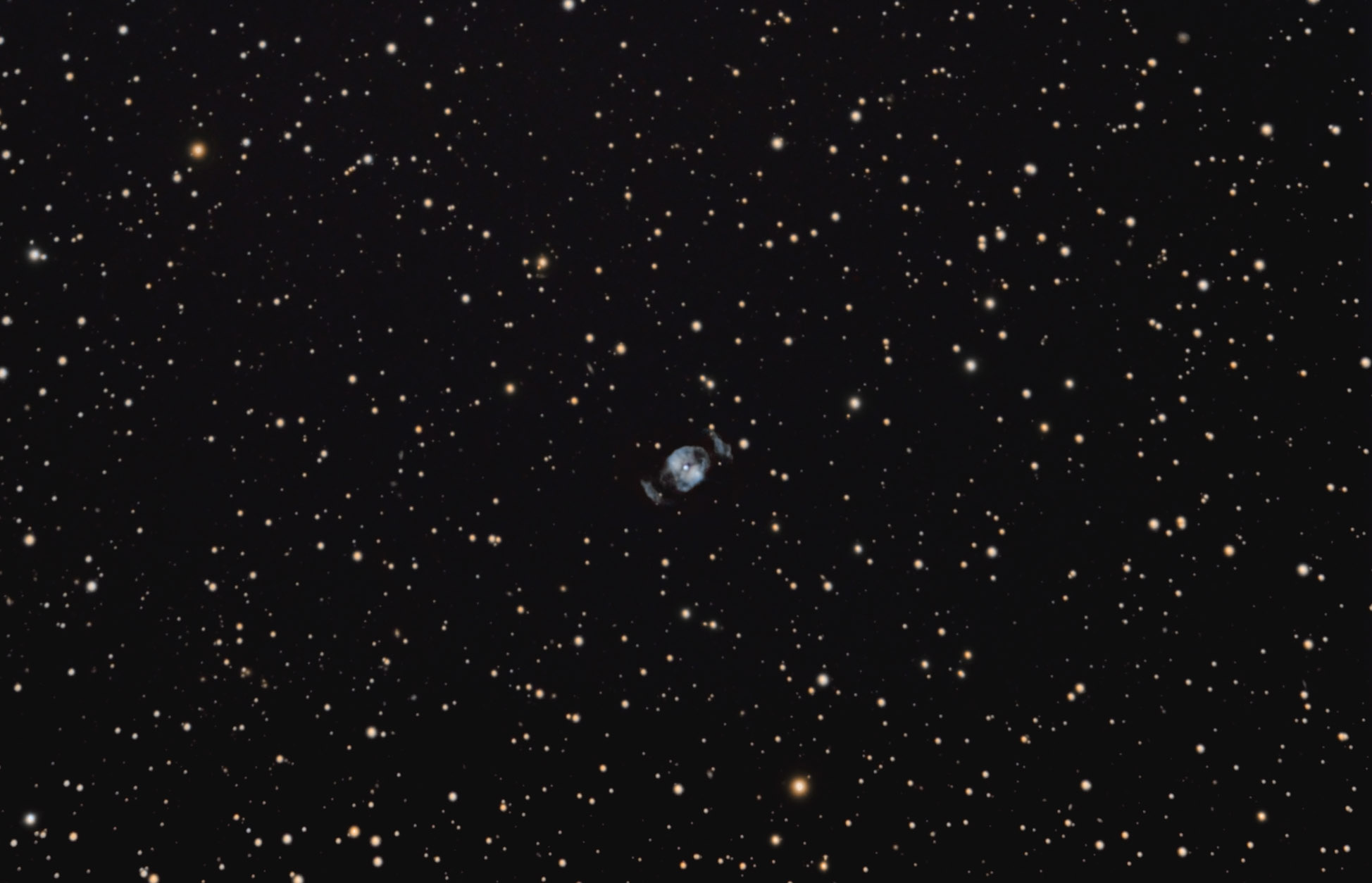