NGC 2419 is a giant, but distant, globular cluster. Globular clusters like M13 and M92 are orbiting our galaxy and are usually no more than 60,000 light years away They orbit out into the halo of our galaxy then dive back through the disk, out the other side and back again to make another loop. But some make bigger loops than others. A very few make extremely large loops. NGC 2419 is one of those. It\'s so far out it used to be thought it was an intergalactic wanderer. It was thought to be wandering around after escaping from its home galaxy. WRONG. We now know it is, in fact, orbiting about our galaxy but much farther out than most of our satellite galaxies such as the Magellanic Clouds. Distance to this guy is still a bit uncertain but say about 275,000 light years from us and 300,000 light years from the core of our galaxy. If it were placed where M92 or M13 is in our galaxy it would far outshine them and be an easy naked eye object in our sky though we\'d still need a telescope to see its stars, a few might be within reach of a pair of binoculars, however. The cluster itself would be as big as the full moon! Outlying stars would make it even larger than that. That\'s how big and bright this cluster really is. It is now thought to be right at the apex of its orbit, as far from the galaxy as it can get and ready to head back in. So come back in a few hundred millions of years and you might get a much closer view of it, though the earth may be on the wrong side of the galaxy when this happens. Just my luck.

Two really bright stars cast a blue haze over the cluster which I\'ve removed in part. The nearest is SAO60232, an A5 star of magnitude 7.2. That means it is one third as bright as a magnitude 6 star, the dimmest normally considered visible to the naked eye. Beyond it is WDS STF 1118 a wide blue and orange double star (WDS; Washington Double Star catalog). The pair shine at magnitude 7.95 making it one sixth as bright as the dimmest star you can see naked eye. Interestingly the blue star is a close double with a separation of only 0.4\" of arc. Way smaller than the blob it makes on my image. So it is really a triple star system. The bright star on the left is 8.0 magnitude and type G0 making it almost the same color as our sun, just a tad bluer. Our sun is a G2 star. Because this was taken through a haze that scatters blue light you do see a blue haze around it as well. That\'s just the same as the sun making our sky blue even though it isn\'t really blue. The haze scatters blue light more than other colors giving it a blue color. This was taken early in my digital imaging career when I didn\'t have the tools to deal with haze I have today. I need to reprocess this one but there are hundreds that could benefit from reprocessing and I just don\'t have the time so this will do for now. 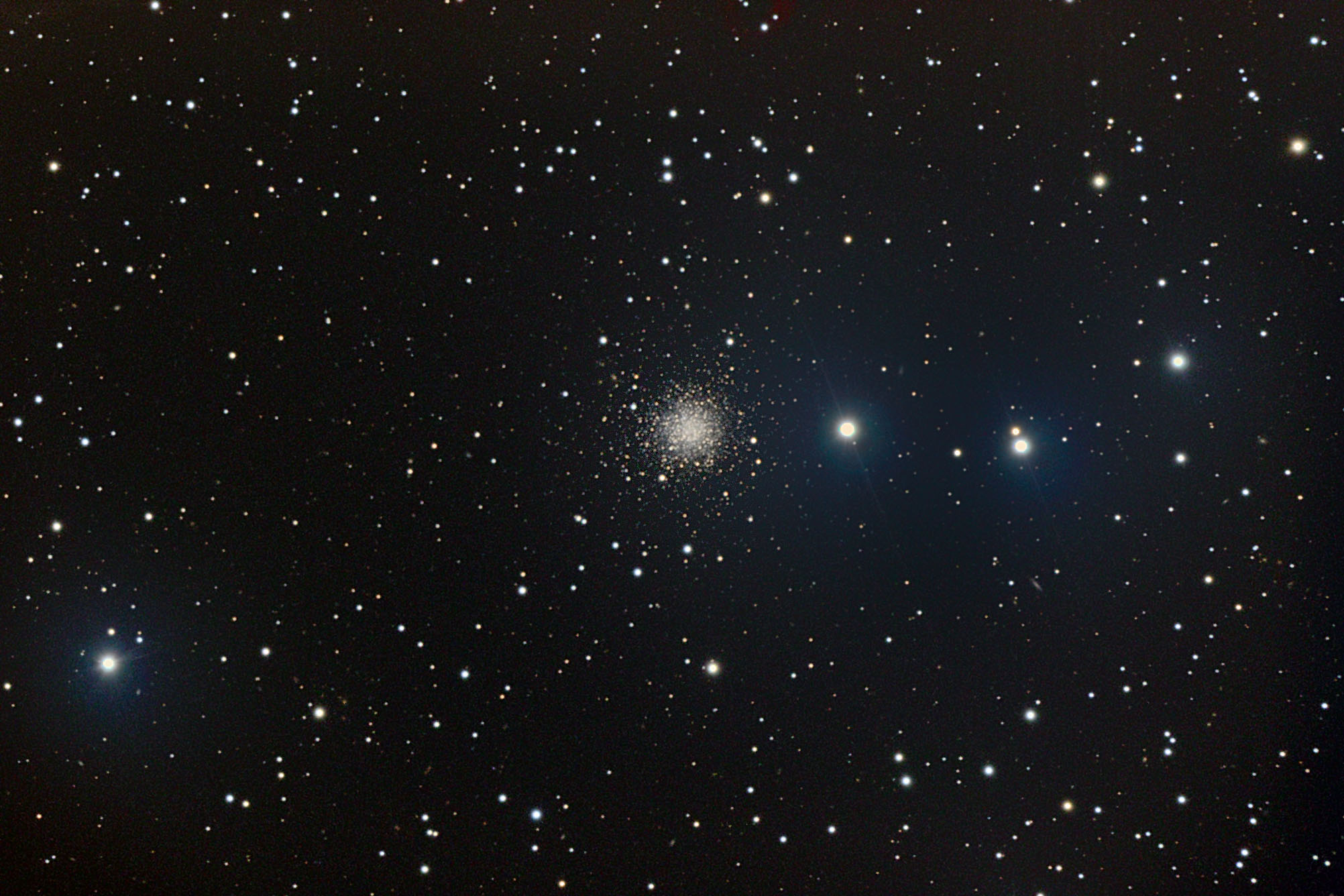