NGC 2460 and IC 2209 are a pair of probably interacting galaxies in the southeast corner of Camelopardalis about 70 million light-years distant by redshift. Tully Fisher measurements, however, can\'t agree saying IC 2209 is 81 million light-years distant while NGC 2460 is 100 million light-years away or 20 million light-years more distant. If correct they aren\'t interacting. Still, there\'s an obvious plume running between the two that appears to come from IC 2209 which has a second obvious plume going to the northwest. NGC 2460 has a bright red central spiral surrounded by a very faint, chaotic blue spiral. Beside the plume between the two, there is an odd linear feature with a couple knots. The annotated image points to the ends of this feature. The knots seem to be redder than the rest of the feature. It seems to be a product of the plume between the galaxies and may be made up of several unrelated features that just happen to line up. This one needs more time than I gave it under the conditions which were rather poor both for seeing and transparency. Typical for this year, unfortunately.

This area of the sky is poorly studied with only 3 other galaxies having redshift data at NED. Only one more has a designation other than a positional designation from the 2MASS survey in the deep IR. There is a small round galaxy on the north edge of NGC 2460. It isn\'t even listed in NED so noted with a question mark.

Notes at NED all indicate the two galaxies are not interacting. However, all these papers are very old, all about 30 years old or older. More puzzling is a note about IC 2209 which states: \"The nucleus is blue, while knots in the peripheral region are not.\" This is exactly backward from what I see in all images on the net including my own. Notes about NGC 2260 disagree with its classification as SA saying it does have a small bar and even one claims there might be a weak secondary bar! I don\'t see one in my image but the one they refer to is small. Due to lousy seeing, I may not have resolution sufficient to see what they are looking at.

Assuming the 70 million light-year distance NGC 2460\'s full extent (not including the plume which may be a feature of the companion) is about 140,000 light-years. That makes it a very large galaxy but most of its luminosity comes from the red spiral portion which is only 30,000 light-years across. IC 2209\'s diameter, excluding plume(s), is only 14,000 light-years making it a very small spiral. Both have strong activity which may be due to their interaction. NGC 2460 has an AGN core (Active Galactic Nucleus) indicating an actively feeding black hole at its core, while IC 2209 is a starburst galaxy indicating massive star formation is going on in it.

I just wish seeing had been better so I could resolve these two better. Yet another for the reshoot list. I fought clouds throughout the frames. They finally won when I took the last frame, a green one. I had to throw it out. 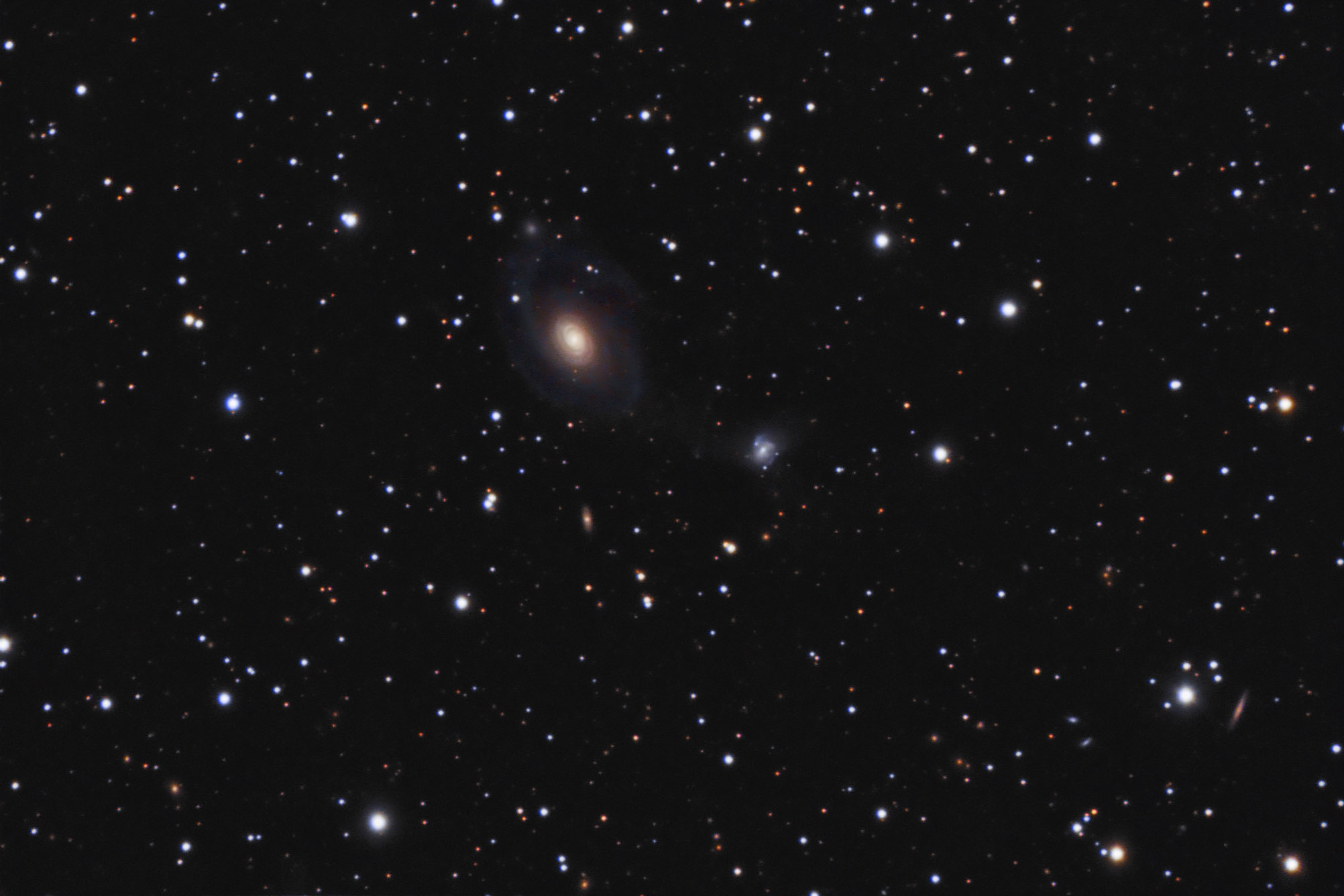 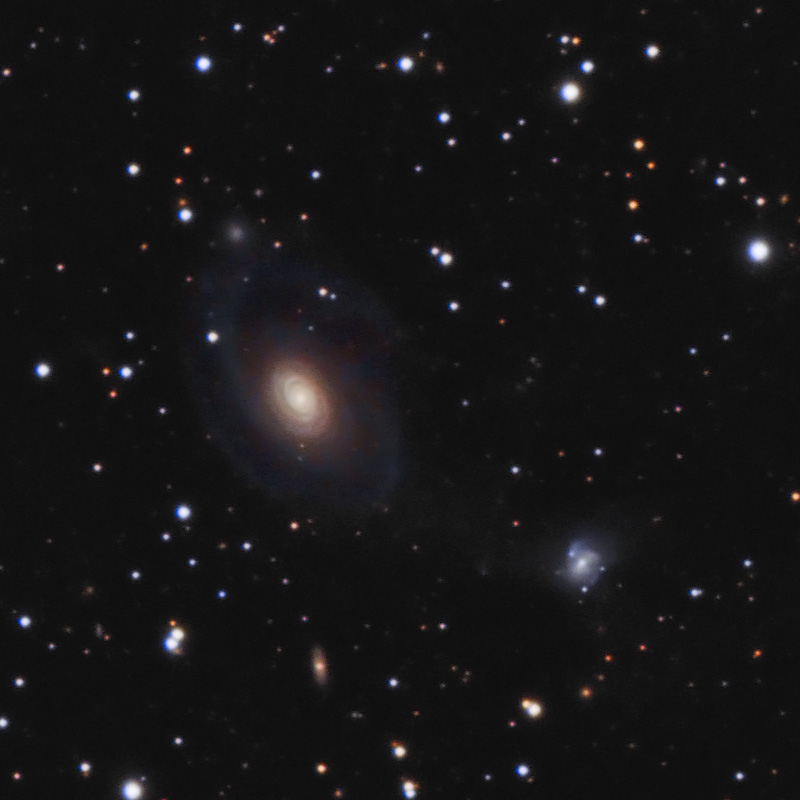 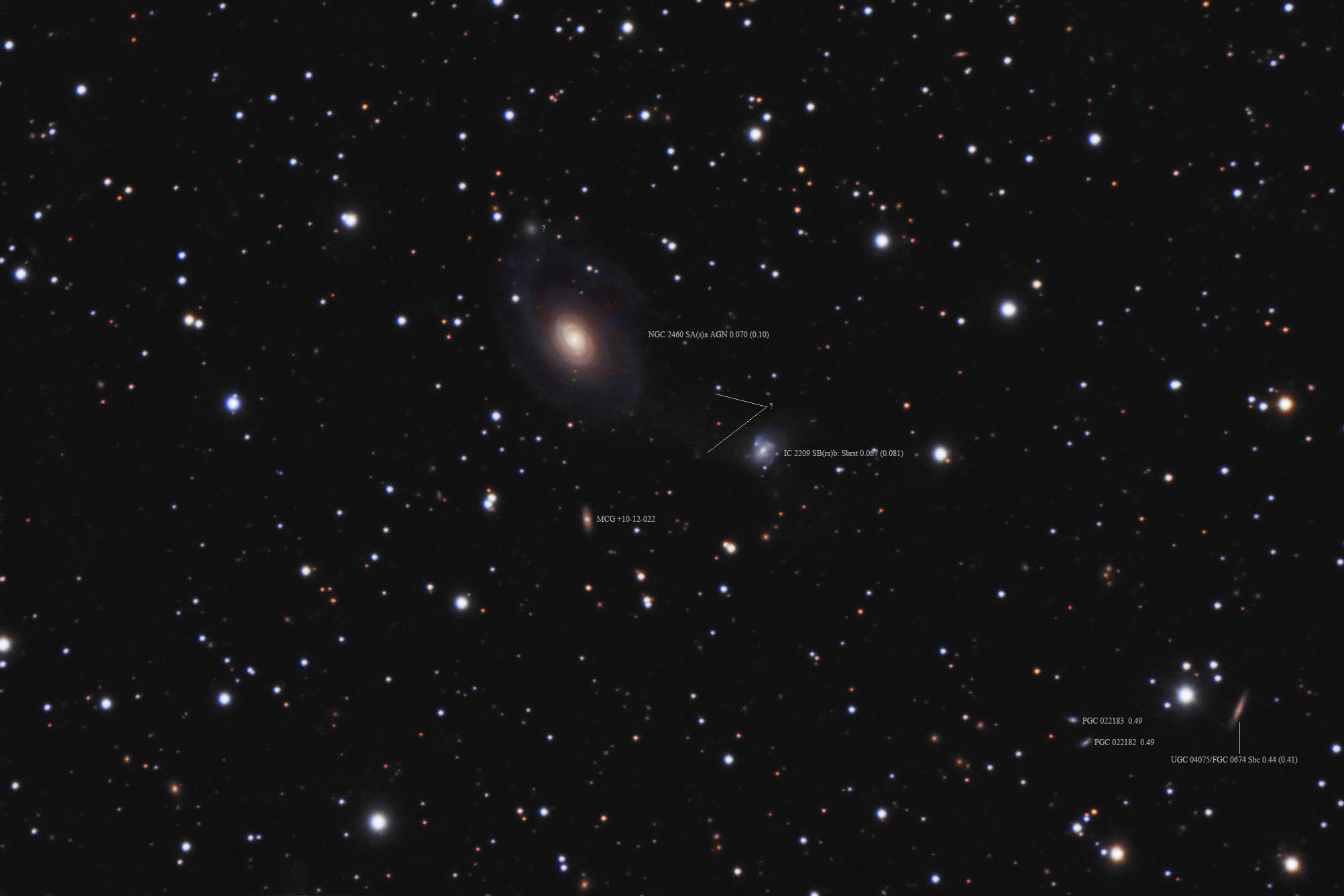