NGC 2500 is a nearby low surface brightness face on spiral galaxy in central Lynx. NED classifies it as SB(rs)d with HII emission. The NGC project says SAB. The bar is short but obvious. The arms are in disarray causing one source to call it a flocculent galaxy. I just see lots of star clouds that align in semi arm segments. Redshift puts it about 29 million light-years away while non-redshift measurements say 33 million, a rather good agreement. Outside the star cloud region is a very faint haze of somewhat blue stars that extends further on the northwest side than the other sides. This gives the galaxy a rather lopsided appearance.

The galaxy was discovered by William Herschel on March 9, 1788. It made the second Herschel 400 list and thus was on my to-do list but at a low priority. Turns out the galaxy is quite isolated with no nearby companions.

Using the non-redshift distance value of 33 million light-years the galaxy is about 38,000 light-years in diameter. Only slightly smaller than an average spiral. But this includes the very faint outlying regions. If limited to the bright portion then it is much smaller at 22,500 light-years. If the redshift distance is used it is slightly smaller yet. It\'s likely the stars of the galaxy don\'t suddenly end as the edges of my faint regions but continue on out just too faint for my exposure time so the full size of almost all galaxies is likely larger than I can measure it.

NED indicated it had HII emissions and the RGB data showed blue blobs that were likely new blue stars and likely marked the H alpha regions. Just that these new massive stars being so bright they hid the pink of H alpha and beta. It doesn\'t take much of a cosmological redshift to move the H alpha out of my 6nm passband. But this galaxy was still within my passband. So, with a quarter moon in the sky, I took 2 hours of H alpha data. Turned out it was quite weak but a few of the blue clouds did show up. I added the H alpha to the color data (not the luminance) and it made a small difference. The annotated image was made before I took the H alpha data so you can use it to compare to the other images with the H alpha. It was hardly worth the effort but there\'s nothing else to do on a bright moonlit night. It didn\'t help that the moon wasn\'t all that far from the galaxy so I may have lost a bit of contrast to it though I doubt I lost very much as I saw no hint of a gradient from it or anything else in the data. 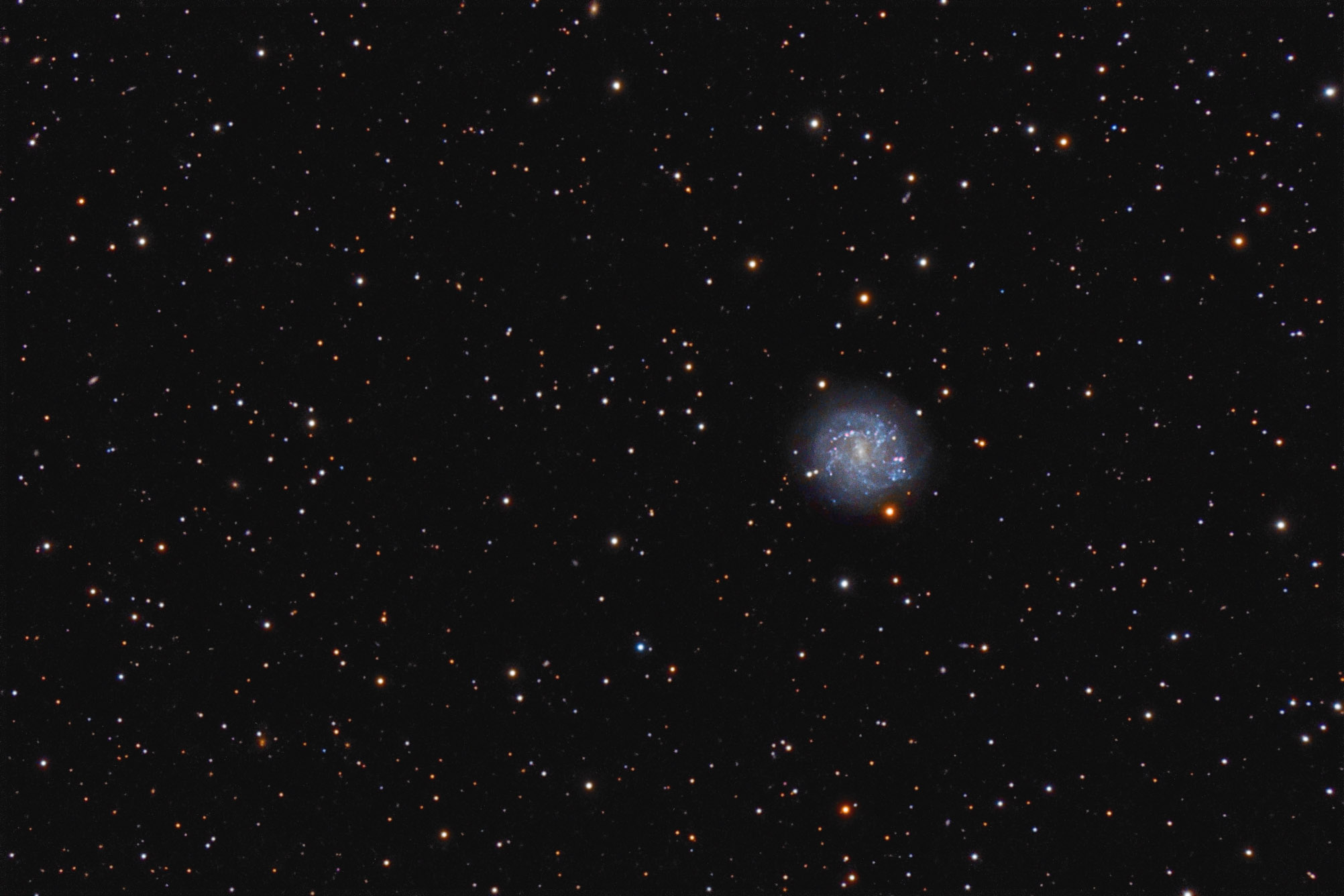 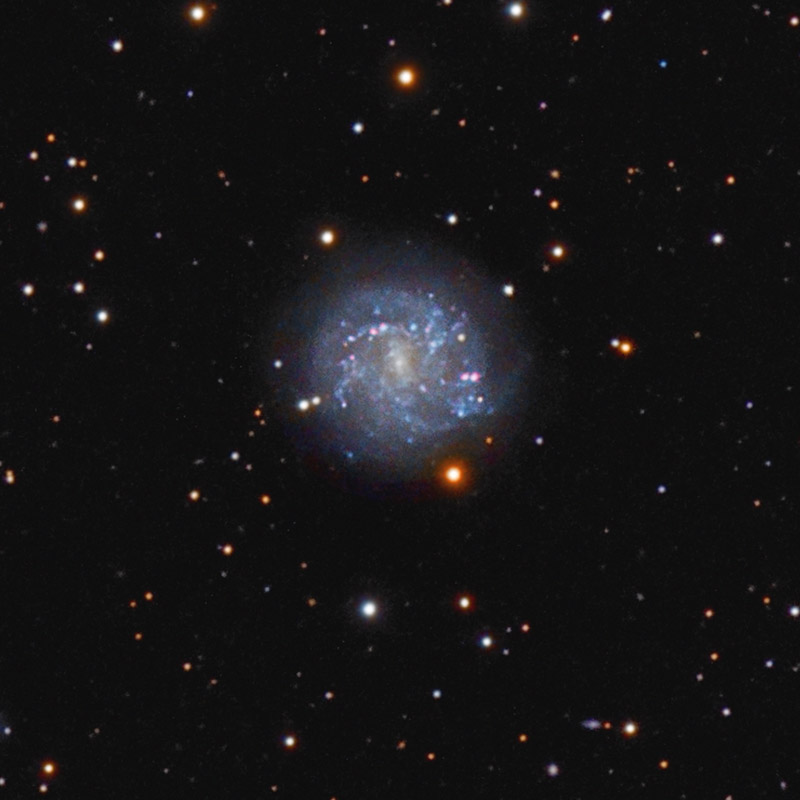 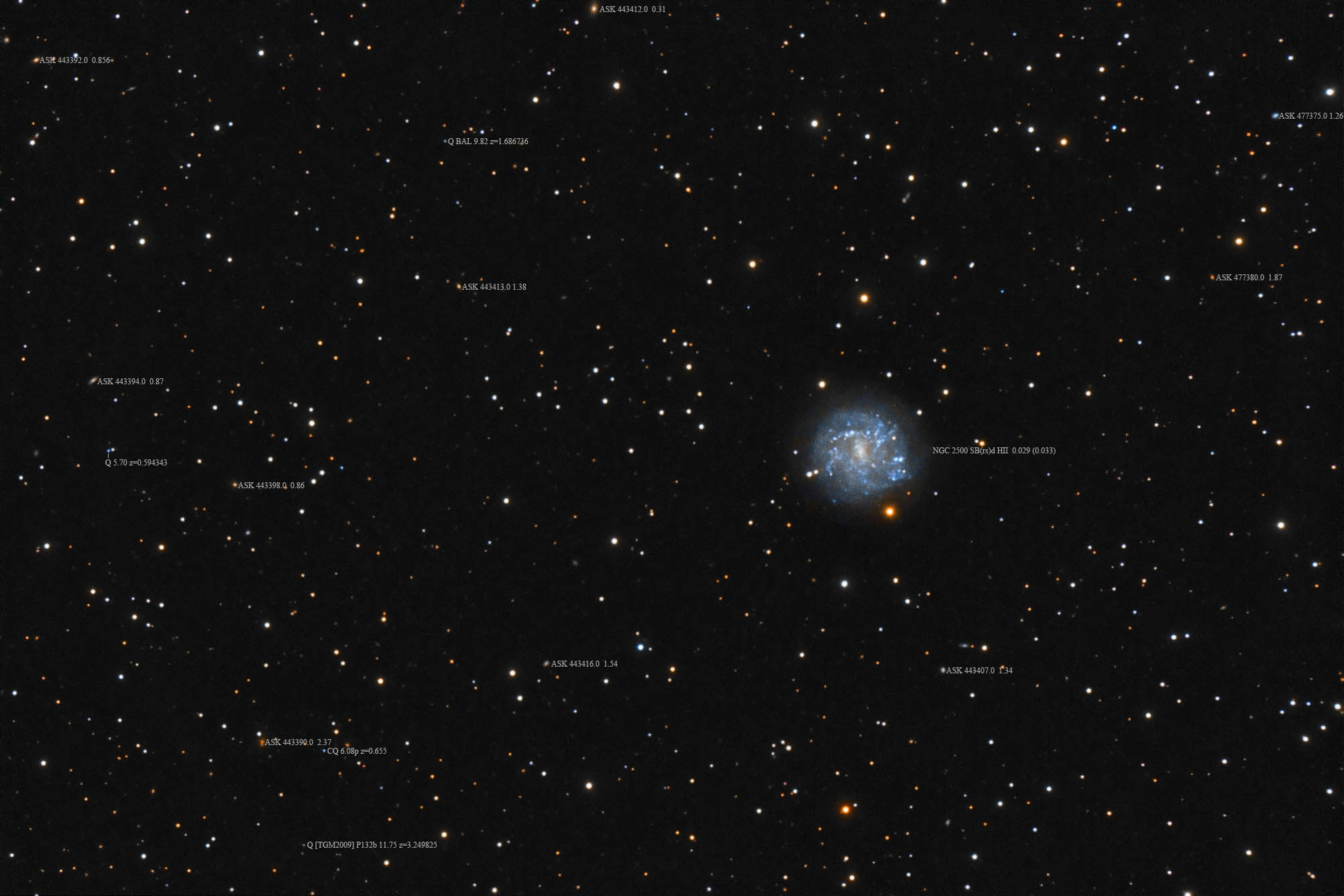