NGC 2793 is another galaxy I\'m surprised Arp didn\'t find a place for in his Atlas of Peculiar Galaxies. It certainly is peculiar and quite similar to Arp 6/NGC 2537, the Bear Paw Galaxy, but with \"wind effects\". He has a category for interacting galaxies he calls \"Wind Effects\". NGC 2793 certainly appears to have a strong east wind blowing across it creating wispy blue streaks across it. It also is a ring galaxy which he included but again these were interacting galaxies. In fact, ring galaxies like 2793 are usually thought to be the result of a near direct hit on the core of a spiral by a dense \"bullet\" galaxy. Yet there\'s no candidate for a \"bullet\" in this case. I found only a couple papers discussing this. They mention LEDA 082356 as a possible \"bullet\" saying its redshift is unknown. Turns out it is now known and at nearly 4 times the distance can\'t be the cause. Neither paper considers the bright core might hide a dense superimposed bullet nor has their apparently been any follow-up studies of this galaxy. I find the rectangular core shape another oddity. Usually, the pushed to the ring the core takes on an arc that matches the ring\'s arc. It may be this galaxy just naturally looks this way but I find that hard to believe. The ring of star clusters along the edge is hard to explain without some outside force being involved. It was discovered by John Herschel on March 6, 1828.

The long diameter of NGC 2793 measures about 29,000 light-years assuming the 89 million light-year distance. It is located in southeastern Lynx on the northwestern edge of the Abell 779 galaxy cluster. It isn\'t related to that cluster which is about 320 million light-years distant. It is likely the distant \"companion\" is an outlying member of the cluster.

The annotated image notes all galaxies in the field for which NED had redshift data. If the galaxy had a name listed in NED other than just one that was its coordinates it is noted. Otherwise, a G denotes a galaxy and Q a quasar. One stellar object was listed as a candidate BLAGN (Broad Line Active Galactic Nucleus) which is likely an underfed quasar or one hidden behind the galaxy\'s stars and dust. As light travel time distances are rather questionable at such high redshifts the redshift z value is also given for distant quasars when Z is greater than 1.

One asteroid was sneaking out of the frame in the lower right corner when I started the luminance data and is noted in the annotated image. One red frame was totally lost to clouds and the remaining frame very noisy so red data is questionable. I didn\'t realize this until I went to process it months later and too late to reshoot. 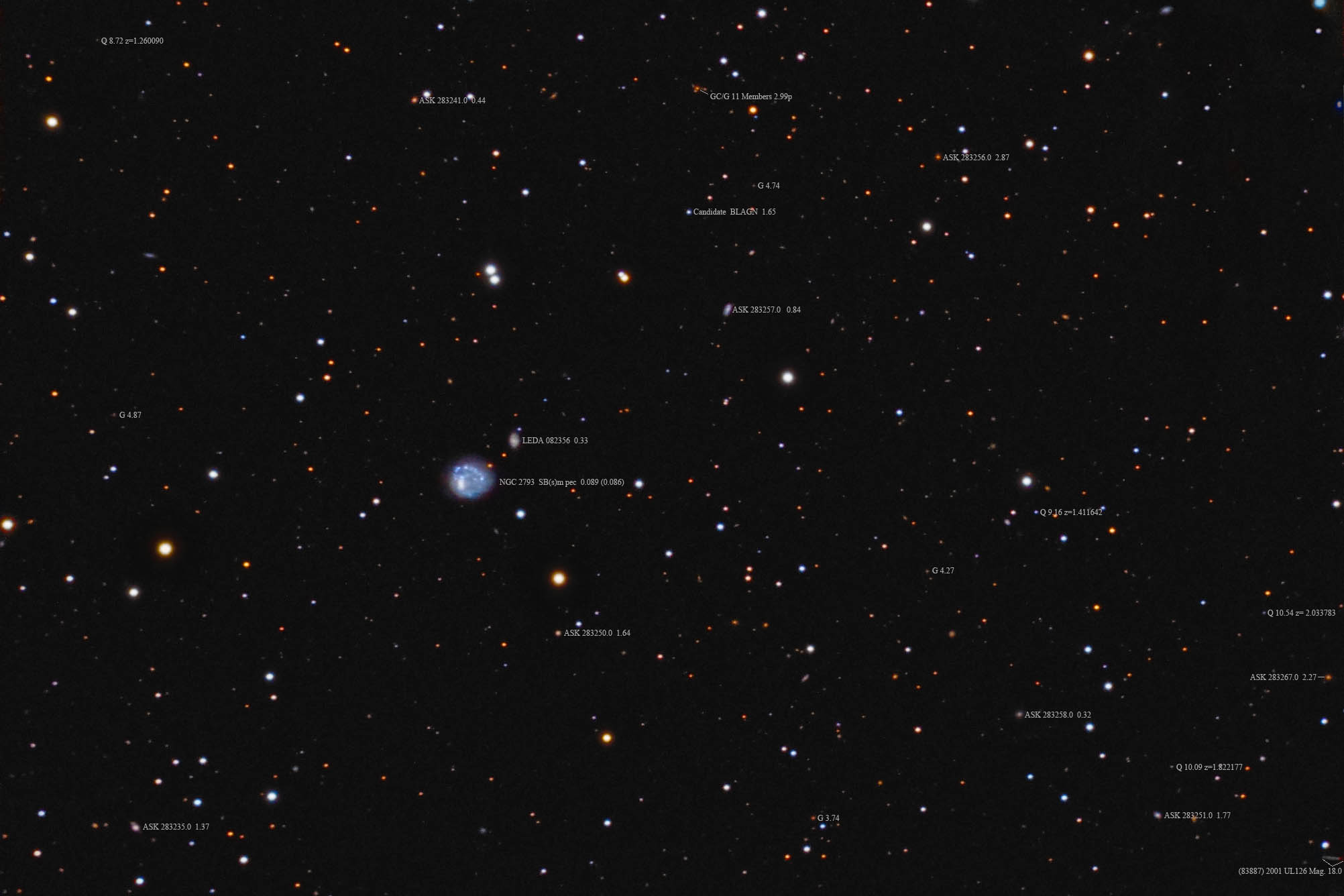 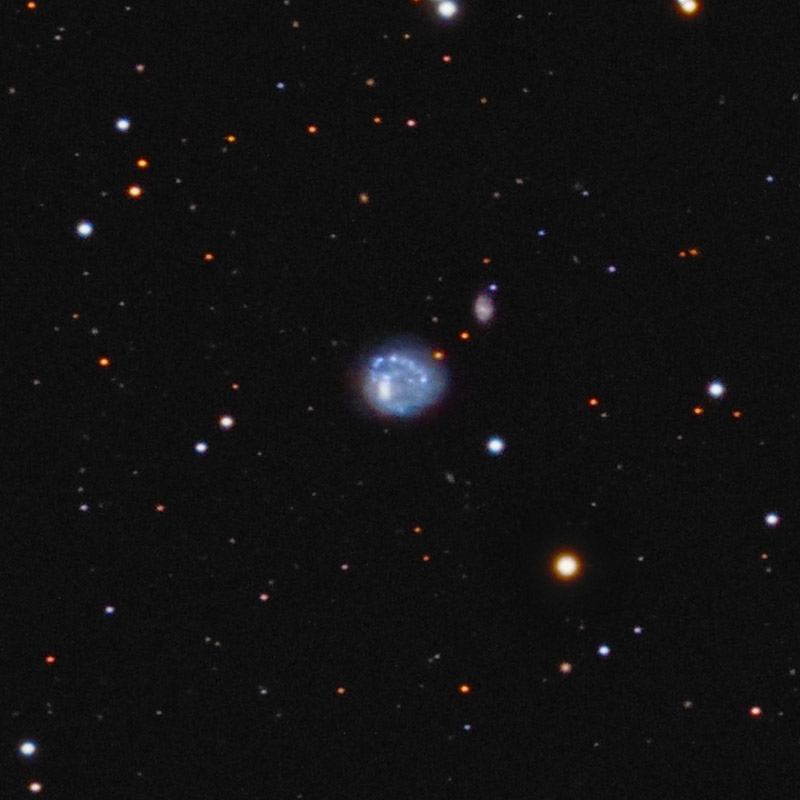 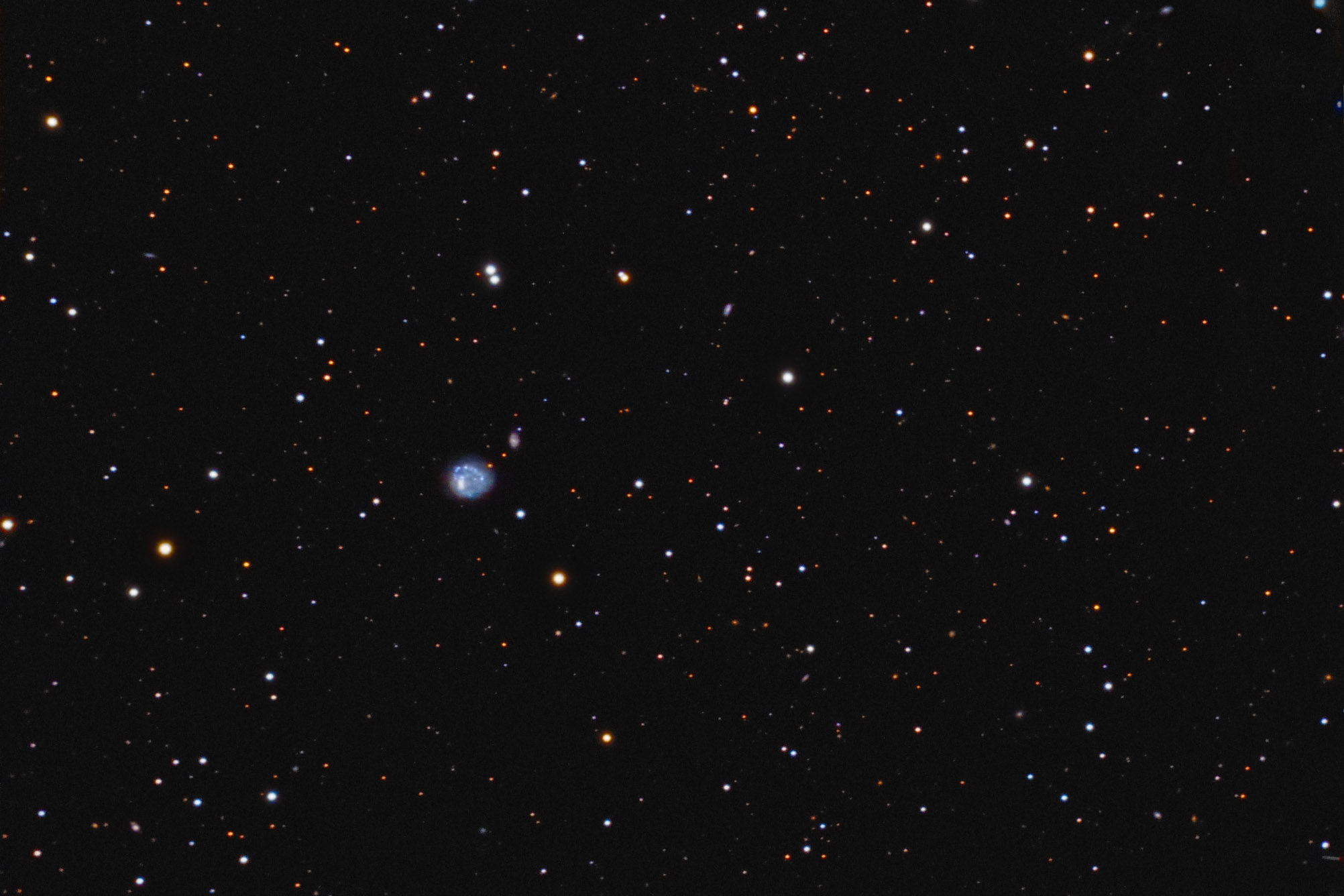