HOLM 124 is a group of 4 galaxies in eastern Ursa Major, southeast of M81 and M82. At one time it was considered part of the M81 group but then redshift and other distance determinations showed it much more distant at say 84 to 100 million light-years. The main galaxy in the group is NGC 2805. It shows a lot of distortion from its interaction with the others three millions of years ago. Its arms are quite angular except in the core region. Most edges are linear rather than curved and it has some rather odd arms such as the spur to the west coming from its northern end. Other arms show lots of star-forming regions that NED shows as other galaxies except for one labeled Part of Galaxy (PoG). I\'ve shown them in the annotated image but since their redshift matches that of the galaxy they are unlikely separate galaxies. The galaxy is quite blue, likely due to all the star formation going on in it.

The other three members of the HOLM 124 group are to the upper left; NGC 2814, NGC 2820 and the really disrupted NGC 2820A/IC 2458. NGC 2814 is made up of several bright blobs. The only reddish one is well above center near a foreground star. The central blob is quite blue but does appear to have a short edge-on linear dust trail through it but it doesn\'t continue into the other blobs. I sure would like to know what it looks like more face on. NED classifies it simply as Sb: agreeing it is an edge on spiral.

NGC 2820 is also an edge on spiral with an odd extension from the west end. NED classifies it as SB(s)c pec sp. It too has a star cloud that NED shows as a separate galaxy though it looks to my eye to be a bright star cloud in the galaxy. Being blue I don\'t see it as the core of some galaxy being eaten by the much larger 2820. NGC 2820A seems to be the most torn up of the four. Being small that isn\'t all that surprising. NED uses the brightest of the star clouds at its north end for its position rather than an average of all its parts. The north end appears to be made of a close bunch of star-forming clouds while the southern region looks almost like a separate galaxy with a blue core and star disk around it though the \"core\" is oblong and likely another star-forming region as it is blue. NED classifies it as I0 pec:.

The annotated image shows the more distant galaxies that NED shows a redshift for. This is a retake of a much earlier image, 2007, that was taken on an even better night but back then my collimation was off so stars are a bit screwy. Color data was severely damaged due to a light leak I didn\'t know was there. This created a gradient in the luminance channel and a red gradient in the red frames. Back then I didn\'t have either the knowledge or tools to deal with it. Due to these issues, I did a complete retake on March 22, 2017 UT. The first clear night with good seeing in months. 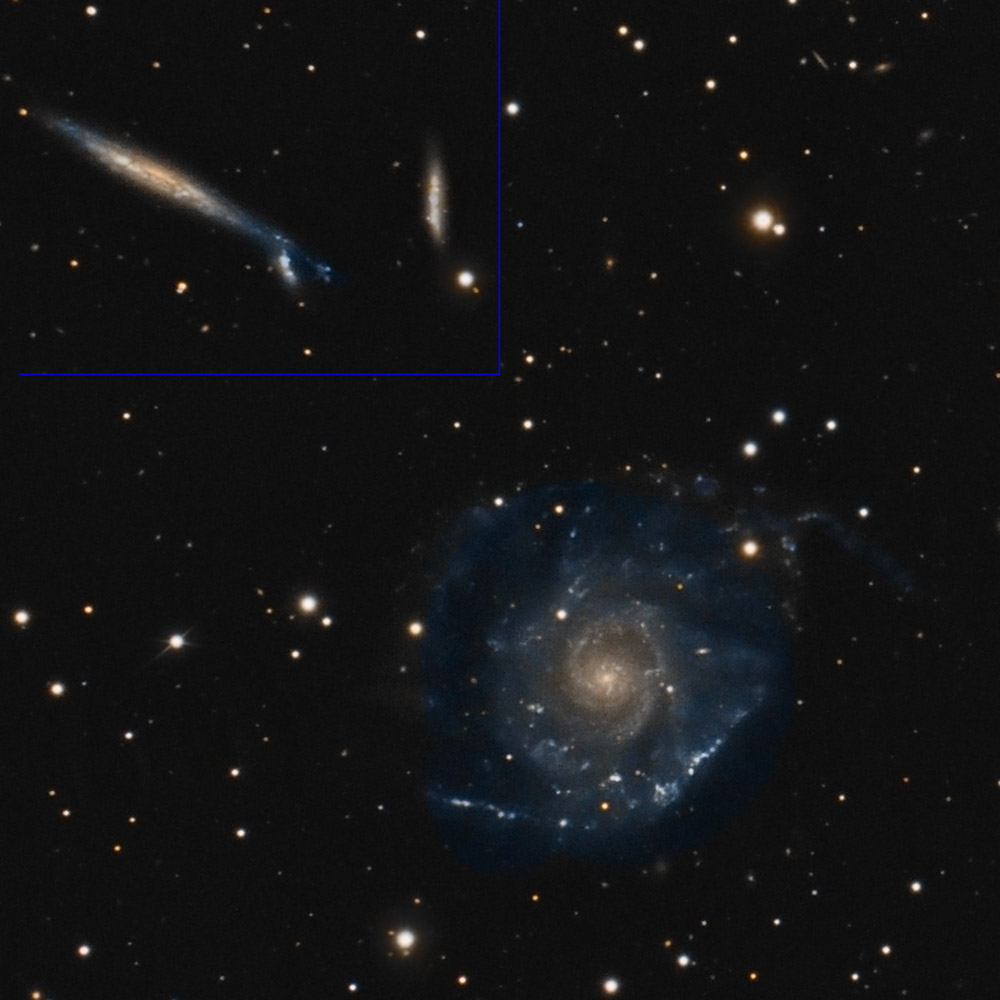 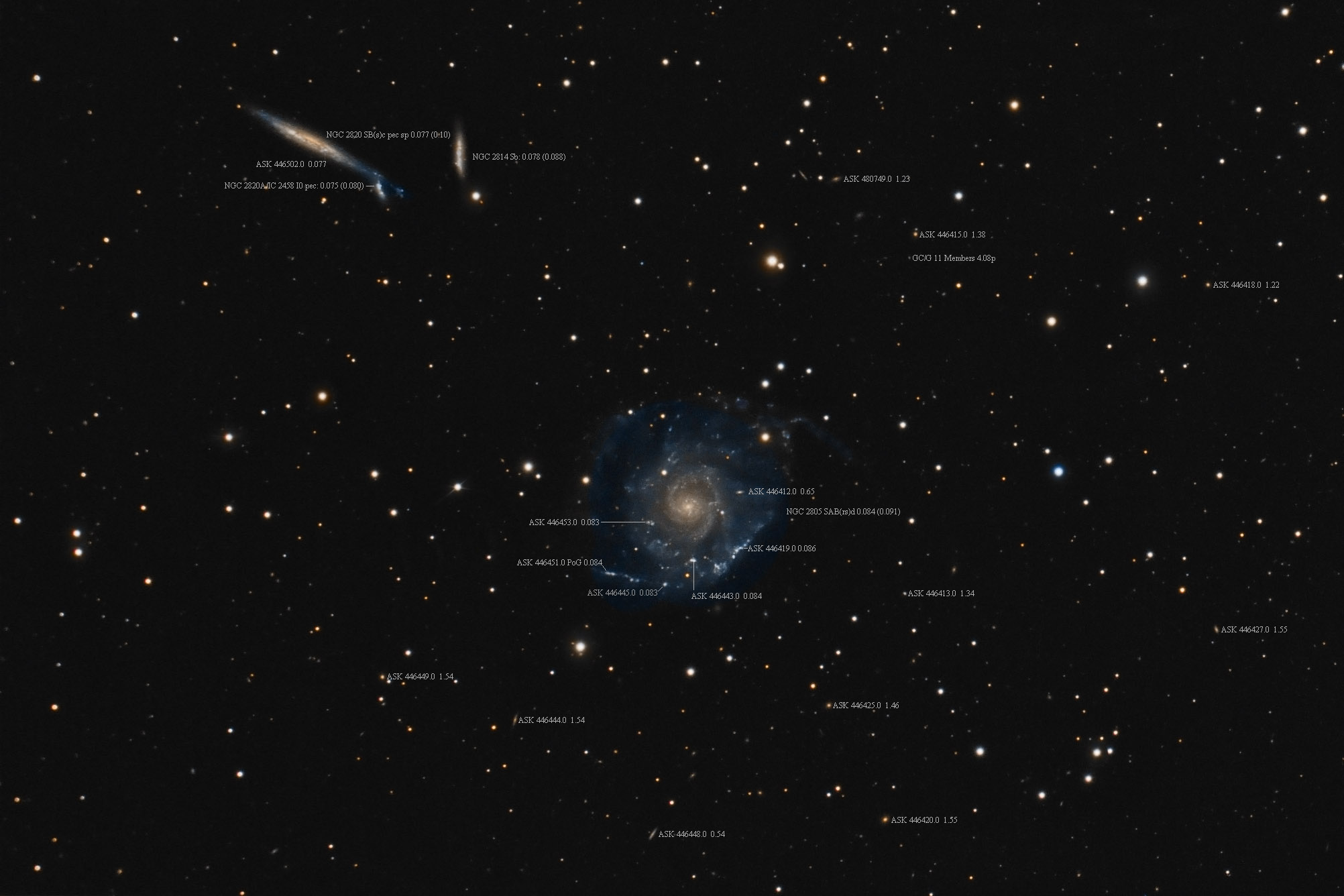 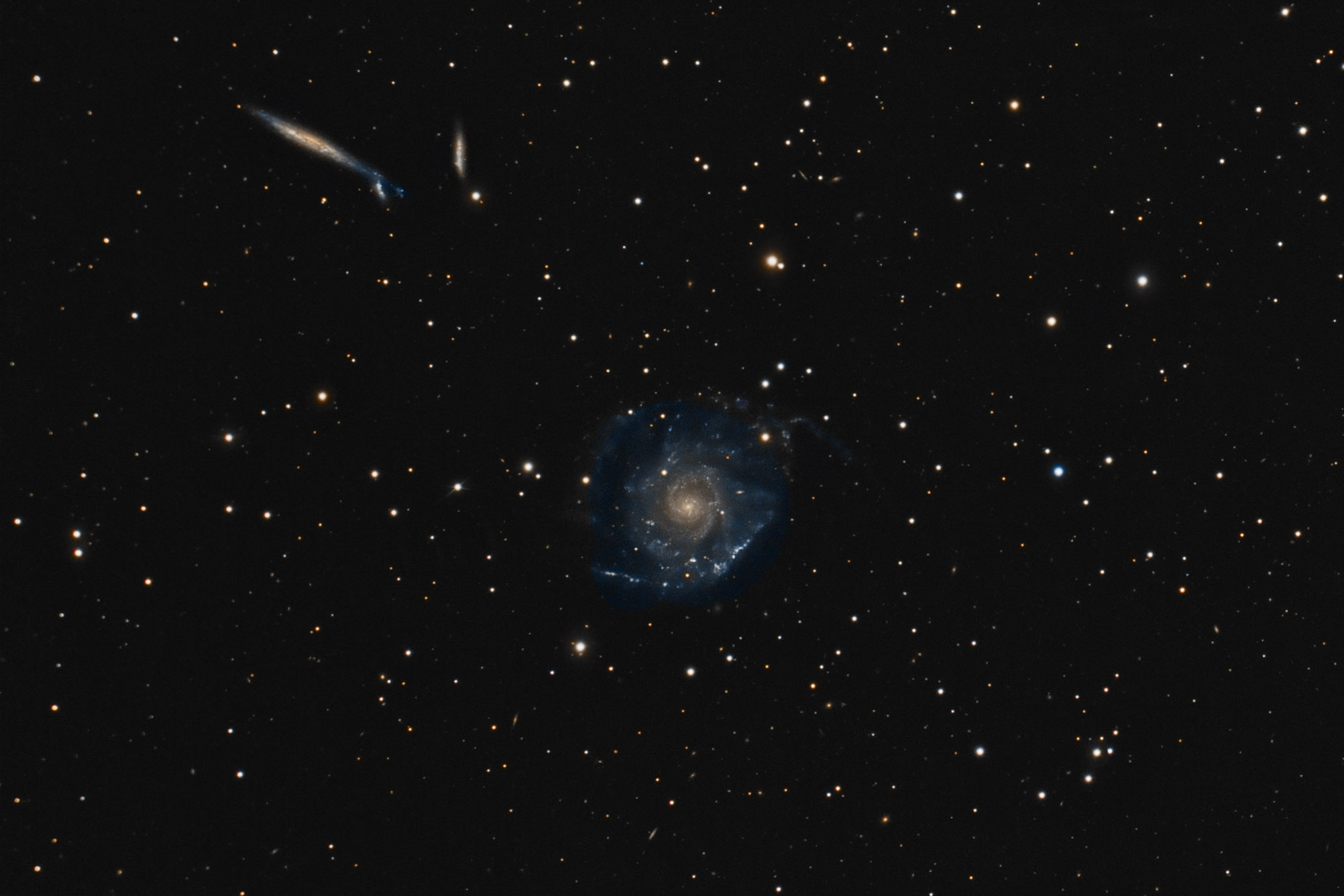