NGC 2859 is a double ring galaxy in southwest Leo Minor about 85 to 90 million light-years distant. The core is elongated rather east-west while the bar is rotated about 80 degrees to a north-south alignment. The bar is very weak. The ends at the first ring, however, are rather brightened. Except for this very weak bar the first ring is not really connected to the core. The outer ring appears even less connected to the rest of the galaxy. There is a hint the bar may continue as a fuzzy area to the outer ring. It may be due to foreshortening rather than a real connection. I found nothing in the literature explaining this unusual arrangement. The outer ring shows hints of spiral structure. M94 has a similar detached ring with some spiral structure in the ring. Others would include Hoag\'s Object But these have only one ring and are not barred spirals. They have much redder cores as well. Are they similar in origin to NGC 2859?

NED classes it as (R)SB(r)0+ while the NGC project says simple SB0. I think this is one of the fuzziest, most ill-defined galaxy I\'ve ever imaged. The two to its north, that are part of its group, seem very fuzzy as well. Is this trying to tell us something? Wish I knew. NGC 2859 was discovered by William Herschel on March 28, 1786. It is in the original H400 program. My log entry from April 15, 1985 with my 10\" f/5 on a humidity compromised night using up to 120x reads; \"Interesting, slightly elongated galaxy. Faint but mottled halo around a brighter center with a starlike nucleus. Requires averted vision to see the mottling.\" I can\'t see the mottling in my image nor any I found online. This may tell more about how my eye-brain was functioning than the galaxy.

The annotated image, as usual, shows the distance to all objects in my image for which NED has redshift data. UGC 05004 is classed as IM and along with another to its west appears to be part of the same group as NGC 2859. A pair of galaxies in the upper right quadrant share a common redshift that put them just under a billion light-years away. Their disks overlap. Hard to tell if they are really interacting or just a line of sight pair. They certainly are part of the same galaxy group.

One mystery is the quasar to the east of UGC 05004, NGC U2859 U02. The quasar is listed as 19th magnitude which is brighter than some others easily seen in my image. Seeing nothing at the location I checked the Sloan image which goes deeper than mine. Again, no sign of the quasar. Its position is uncertain with an error bar of 2.5\" which is 5 times greater than most objects in the image. But nothing is seen in a 10\" circle in the Sloan image. Also, the object isn\'t listed in the Sloan data at NED. I don\'t know if it doesn\'t exist or the coordinates are wrong. I marked the position but don\'t expect to see anything there above my noise level.

Two 7th magnitude K0 stars tried hard to mess up my image. One by being close to NGC 2859 and another I thought I had far enough off the bottom of the image but obviously, that wasn\'t the case. I could have cloned out the nasty glare but decided against it. My cloning skills tend to be rather poor and obvious. 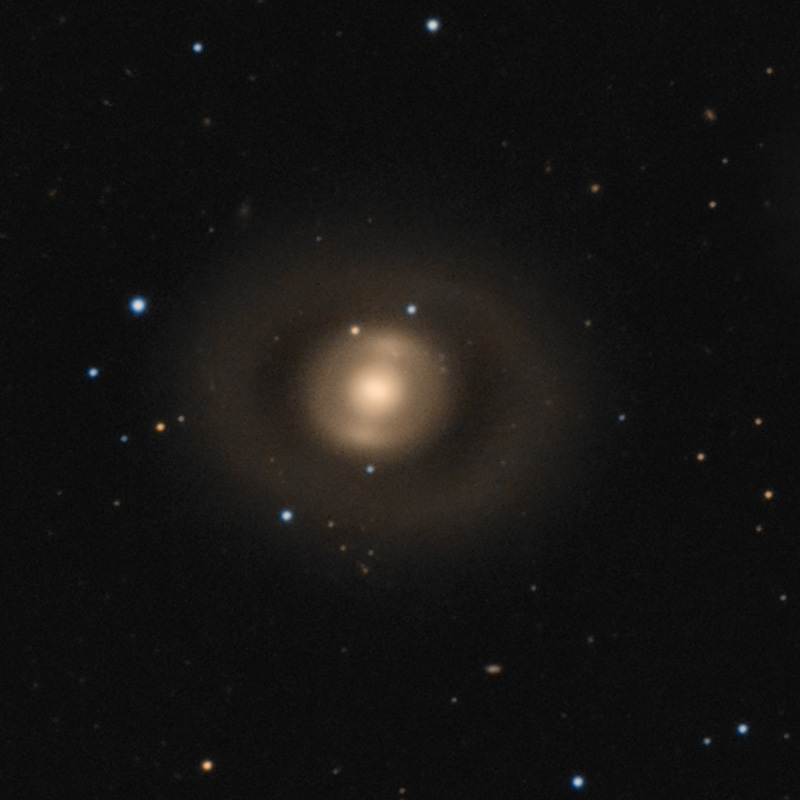 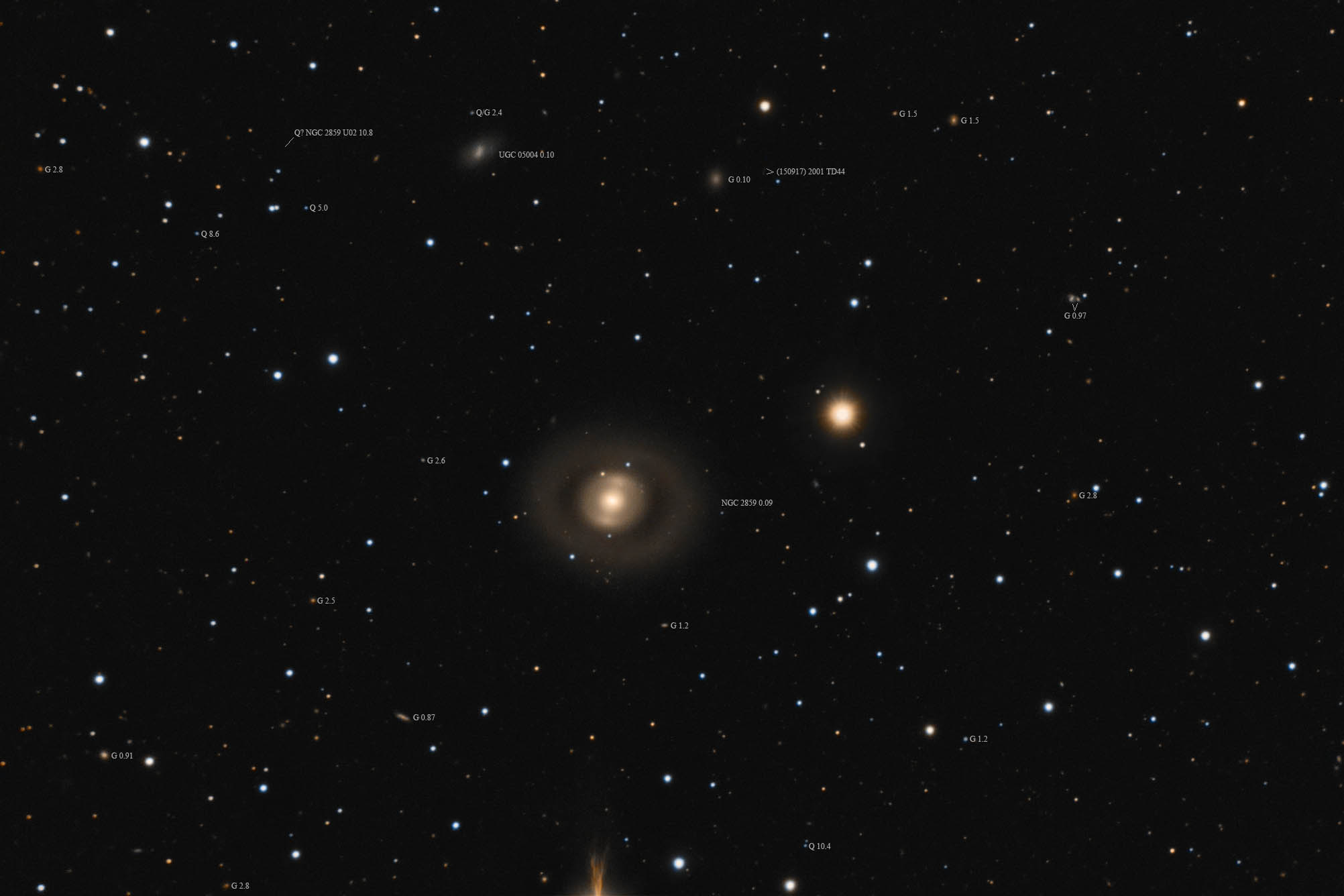 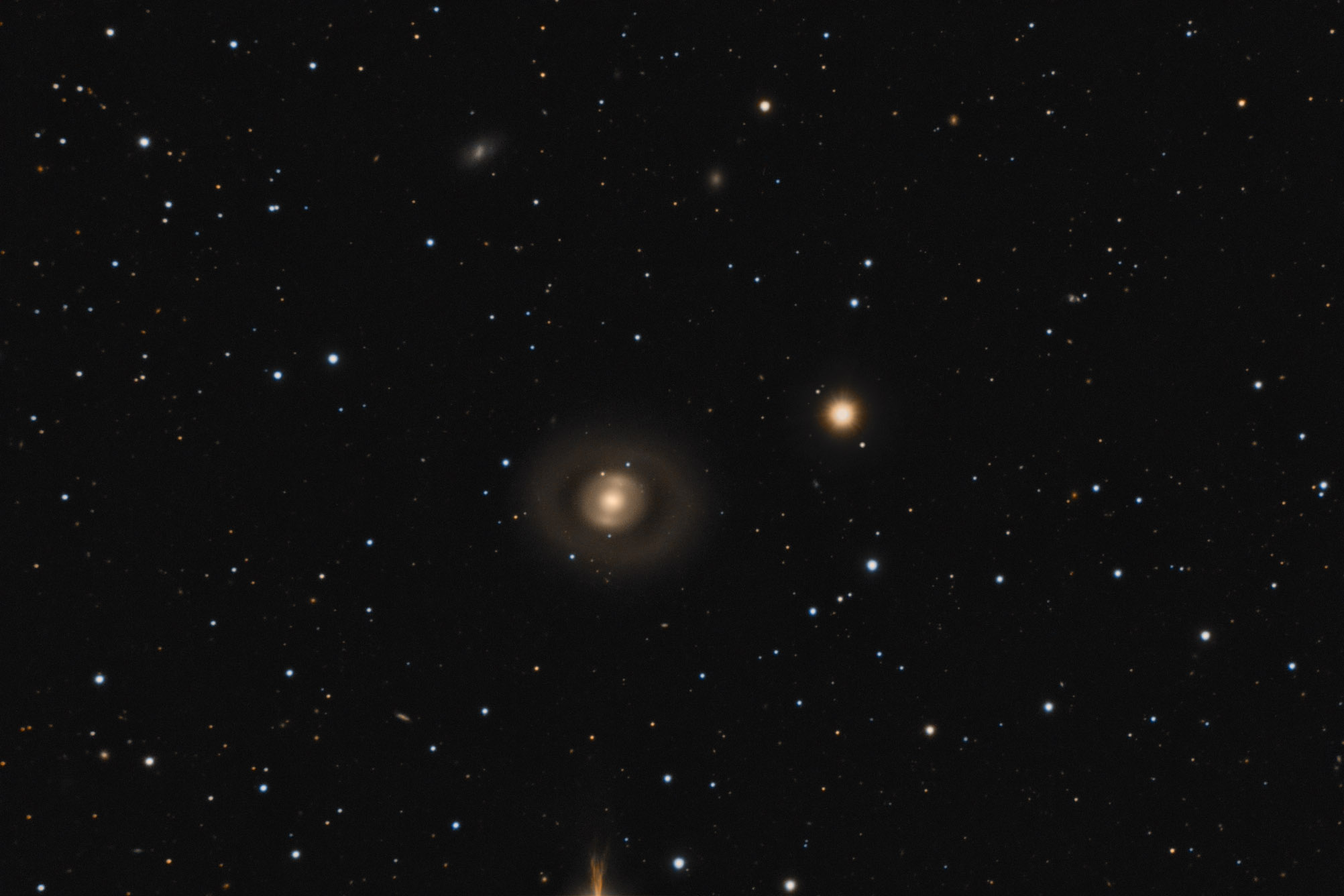