NGC 2876 and its companions are located in Hydra about 2 degrees north of Alphard (Alpha Hydrae). This put it right in the geostationary satellite belt as seen from my latitude. What a pain. I had dozens of satellites to remove from these images, many right atop each other such that auto rejection software was worthless. Also with only 2 color frames per color frame it wouldn\'t work in any case. This means it is rather low in my sky where seeing isn\'t all that great nor is transparency. I knew it had a plume to the west but the other plumes took me by surprise, especially the long one to the east. The galaxy is about 290 million light-years distant. That means from the end of the eastern plume straight across to the end of the western plume is over a half million light-years while the bright inner core spans only 38,000 light-years. It has three companions at virtually the same redshift. IC 2471 also has plumes though my exposure time was too short to pick them up very well. I suspect an interaction between the two occurred sometime in the past. Both are classified as being peculiar. Though I suspect the long eastern plume of NGC 2876 may trace the path of a galaxy it cannibalized.

With MCG-01-24-01 to the north, NGC 2876 and IC 2471 form a triple galaxy cataloged as LDCE 0640. Why LEDA 1029934 to the west doesn\'t make a quadruple I don\'t know but its redshift is very slightly less than the other three. Apparently that was sufficient to throw it out of the group. It is by far the smallest of the group at 35,000 light-years. But then MCG -01-24-014 a bit removed in angular distance has virtually the same redshift as the first three and LEDA 154000. Including these makes a sextuple galaxy group but only the tightest three qualified apparently more due to angular distance than anything.

David Malin (who else?) has taken a very deep image of the plumes involved. See them at: http://ftp.aao.gov.au/images/deep_html/n2876_d.html

I find very little on these galaxies. One source I found claims NGC 2876 harbors a mid size black hole but I was unable to find any paper supporting this and the webpage gave no references. NGC 2876 was discovered by Édouard Stephan on March 5, 1880 while IC 2471 was found by Guillaume Bigourdan on March 5, 1899.

The very red star to the southwest of NGC 2876 and northwest of IC 2471 is a Mira class variable star, RZ Hya. Classed as a M5e star (the e means it has emission lines) its red magnitude is 5 magnitudes brighter than its blue according to SIMBAD. Measured on my frames it is some 6 magnitudes brighter in red than blue light and somewhat dimmer than its average value. That may account for how red it is. SIMBAD lists its IR brightness a 4.82 in J band and 3.53 in K so it is emitting most of its light in the infra red part of the spectrum. It\'s listed B magnitude is 16! Now that\'s a red star.

While there are other galaxies in the field that may or may not be part of this group I found no redshift data for any of them so didn\'t include them on the annotated image. I\'d not have prepared one except I picked up two faint asteroids. The minor planet center lists them at 20.1 and 20.3 magnitude. I found something very odd about the 20.3 magnitude one. While my seeing for the 20.1 magnitude asteroid allowed it to show as a nice fine trace, tighter than I usually get on an asteroid of this brightness the 20.3 magnitude asteroid is very fuzzy yet the two are only separated by 85 seconds of arc. Both were taken on the same image frames. So why is one fuzzy and one sharp? I know a very few asteroids have been reported to show comet like traits, I don\'t find (366447) 2001 YU51 to be one of them. This was taken in October so too late to go back and take another look at it. It is a mystery. My processing was identical for the two regions so that\'s not it. The raw FITs show the same issue. 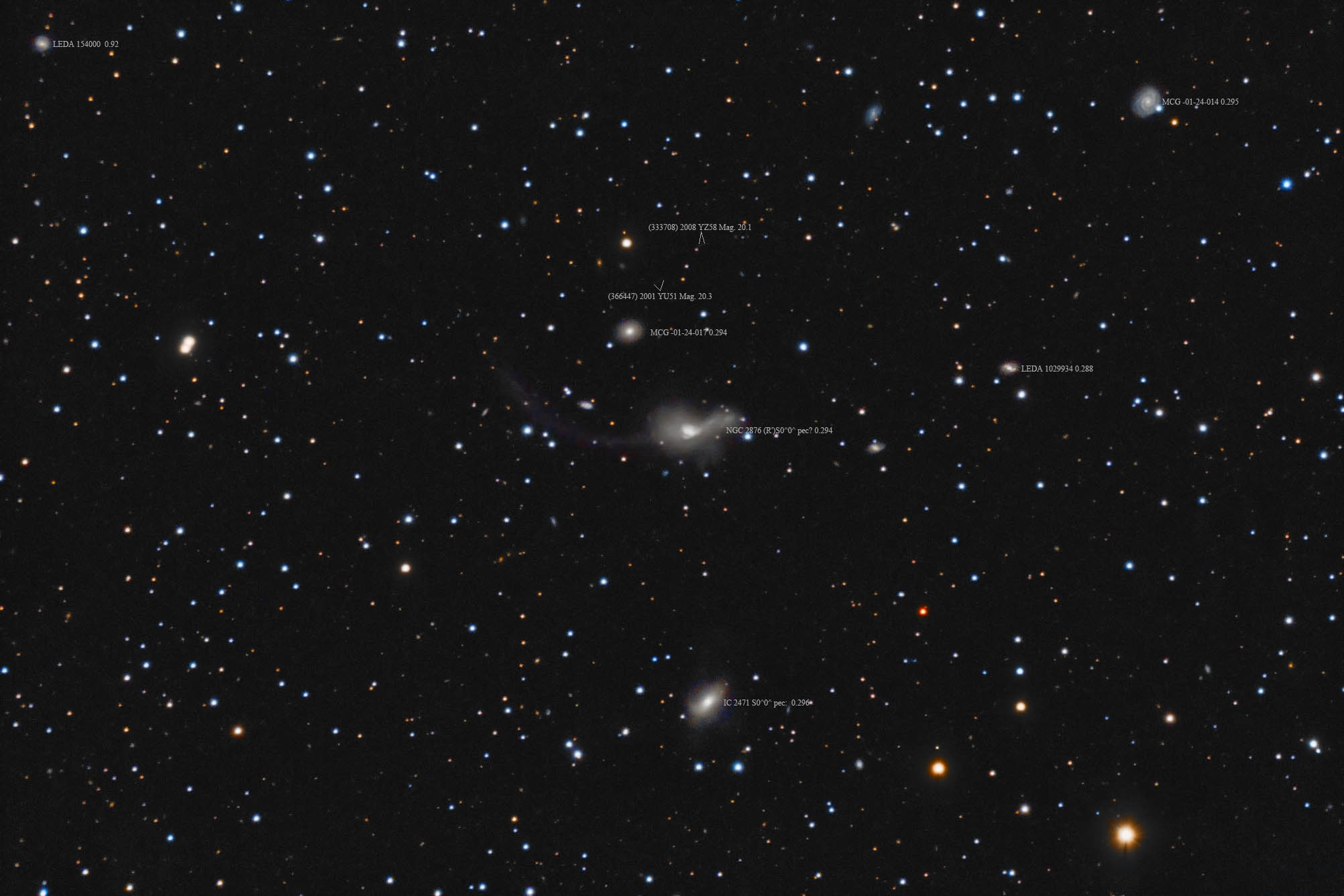 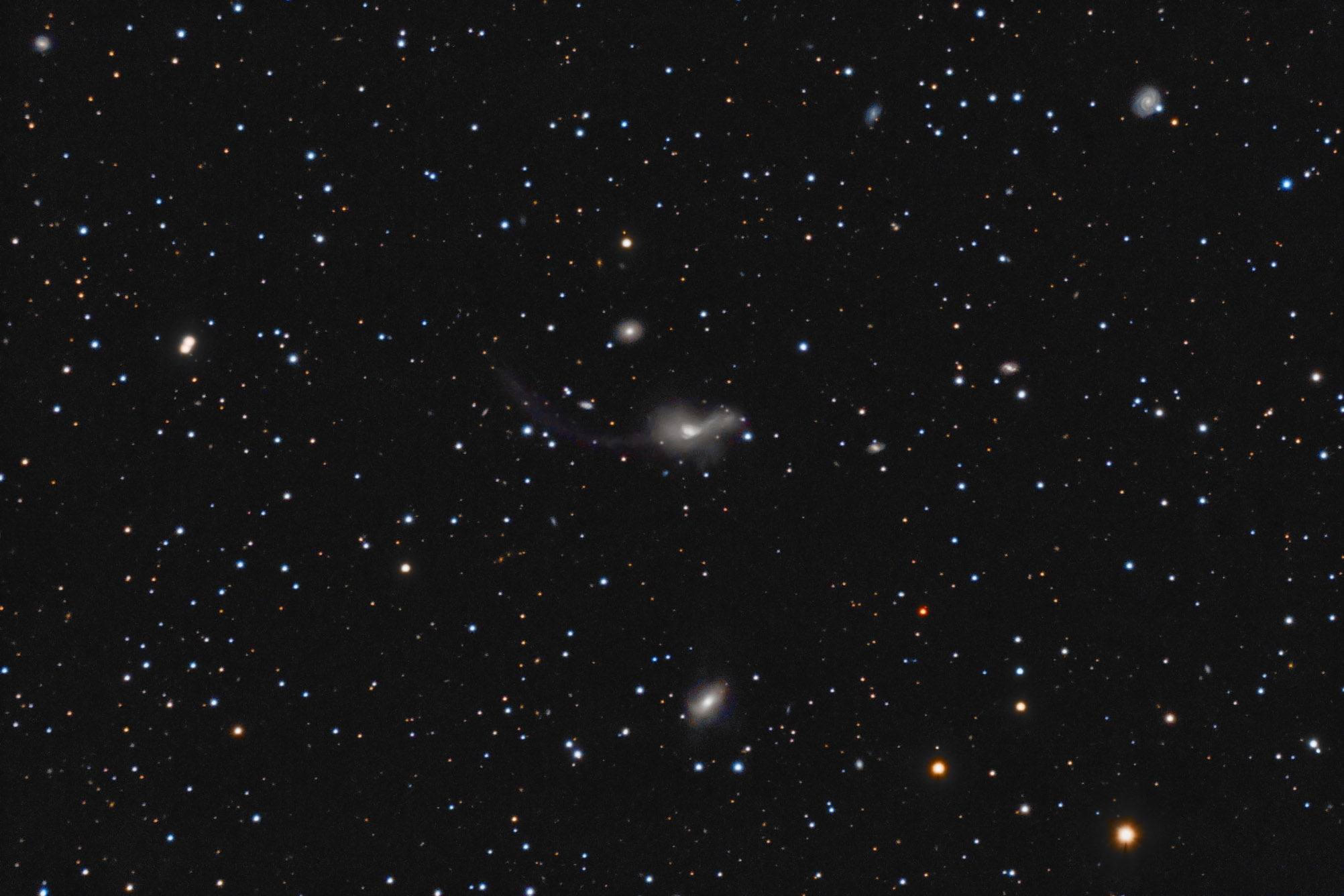