NGC 2985 as a spectacular spiral 2.6 degrees north of M82 in Ursa Major just below its border with Draco. Redshift puts the galaxy 64 million light-years distant while a Tully Fisher measurement says 67 million light-years in very good agreement. The spiral has a rather bright flocculent inner spiral that is mostly red with some blue segments surrounded by a huge diffuse blue arm or arms. Most literature says it is a single arm but I think I can trace two that may come from the inner structure. In any case, it is quite a beautiful galaxy that for some reason is rather ignored by the amateur community. Maybe due to its proximity to the far more famous M81 and M82.

The galaxy was discovered on April 3, 1785 by William Herschel. He had an error in the position that wasn\'t caught until 1863 by Heinrich d\'Arrest. Later in 1865 George Rumker independently found and reported the error so some sources give all three credit for its discovery. I\'ve also seen it claimed that John Herschel found it in 1831 but didn\'t realize it was the same one his dad had seen earlier. It is in the original Herschel 400 list. My notes from April 15, 1985 reads; \"Interesting nearly round galaxy with a bright center and mottled outer halo. Several star clouds sen with averted vision. Bright center seems elongated with averted vision but round with direct vision. I must look at this one again on a better night.\" I noted the night to have poor transparency due to humidity. I was using my trusty Cave 10\" f/5 that sits in my present observatory. I apparently never went back for a second look. At least none is recorded.

Galaxy surveys don\'t cover this region either so the annotated image has only one other galaxy noted with redshift data and it\'s on the very western (right) edge of the frame. I have annotated all galaxies NED knows about which isn\'t very many. Even some rather large ones with detail aren\'t in NED even as something other than a galaxy. I\'ve marked the brighter of these with a question mark to indicate how poorly this area has been covered even by the pros. But NGC 2985 itself has been studied a lot for many things including heating of its disk and how that modifies the thickness of the disk. Though I found very little on its duel structure with the bright inner region of arm segments and faint outer ringlike but knotted area. I wonder if the outer structure will evolve into a ring as is seen around M94 and similar galaxies.

An amateur processed image of the core of this galaxy using only IR and red filters, so the colors are false, is at: http://commons.wikimedia.org/wiki/File:NGC2985.jpg The processing only picked up the very core region. It is rotated about 30 degrees counterclockwise from my north up image. The bright star at the lower left is directly left on the edge of the bright core in my shot. The two orange stars on the other side of the brighter region in my shot are to the upper right and well beyond what appears to be the edge of the galaxy. I suspect the processor did this to simplify noise reduction issues from cosmic rays and other issues. Correctly processed it likely would show detail where this image is black.

This was taken on what I\'d have called an average night but considering what I\'ve been imaging through for the last couple years and especially the summer, fall and winter it was a surprisingly good night, one neither the Clear Sky Chart nor any weather bureau predicted would even be clear. Sometimes you get lucky. 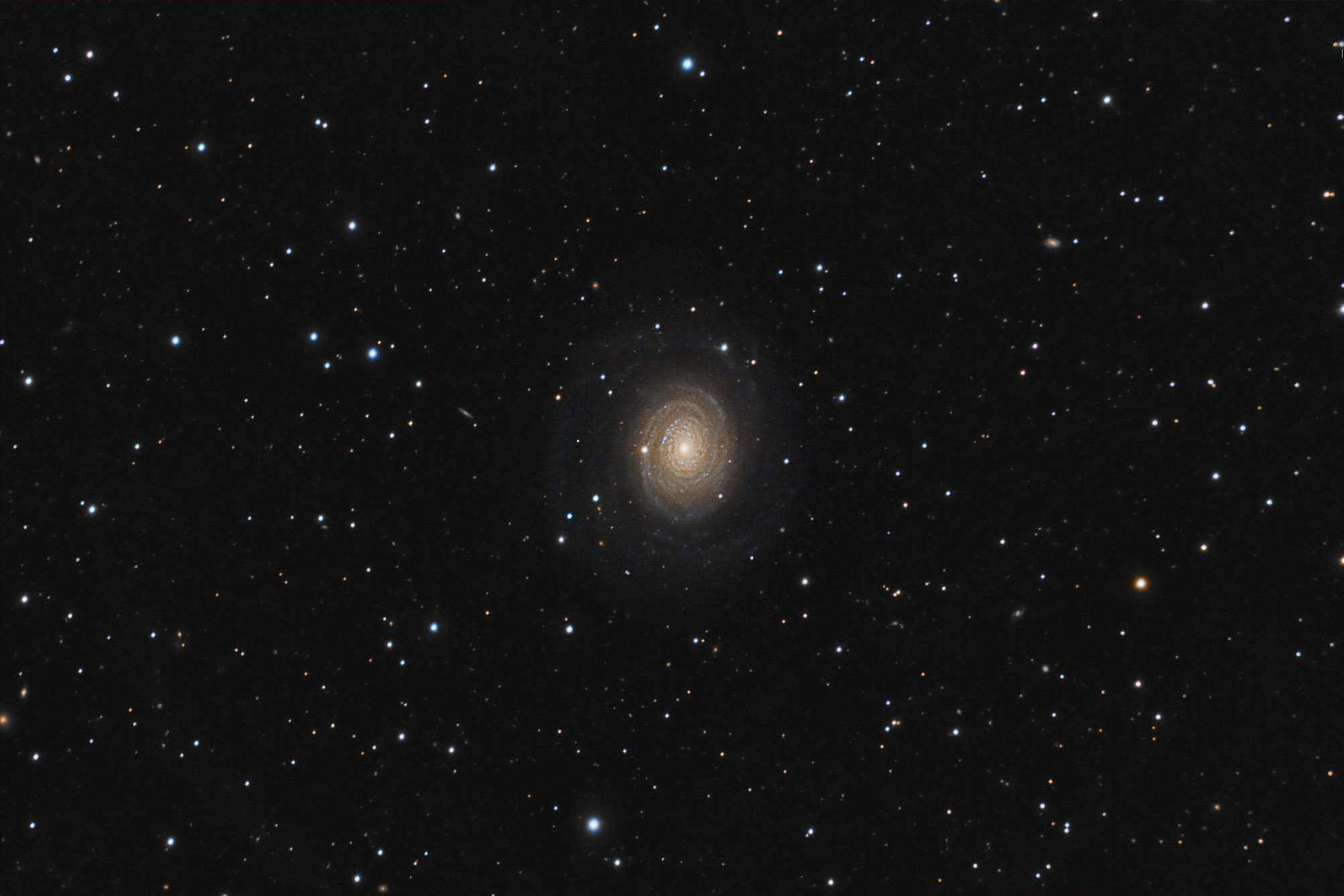 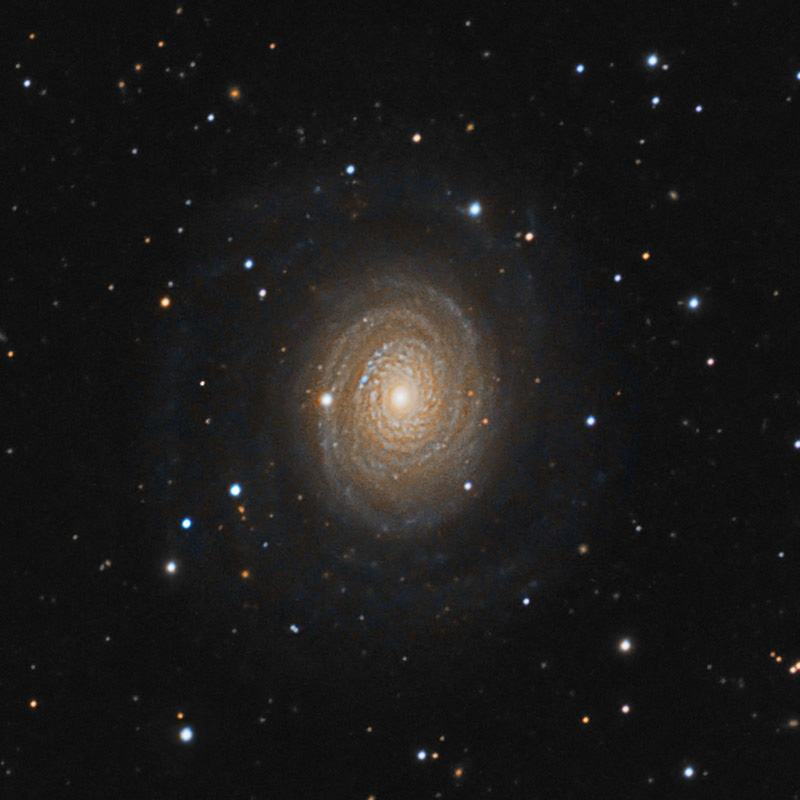 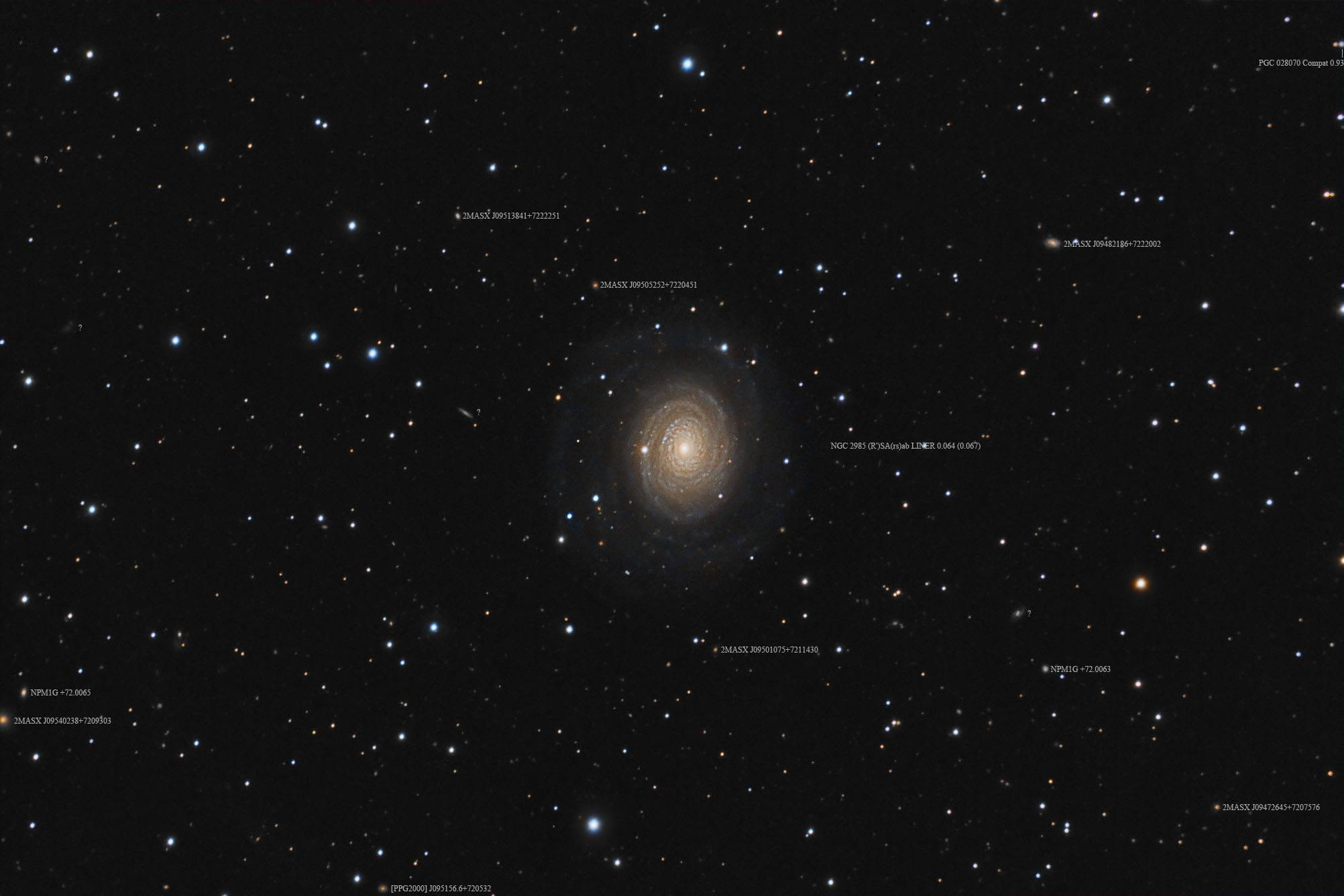